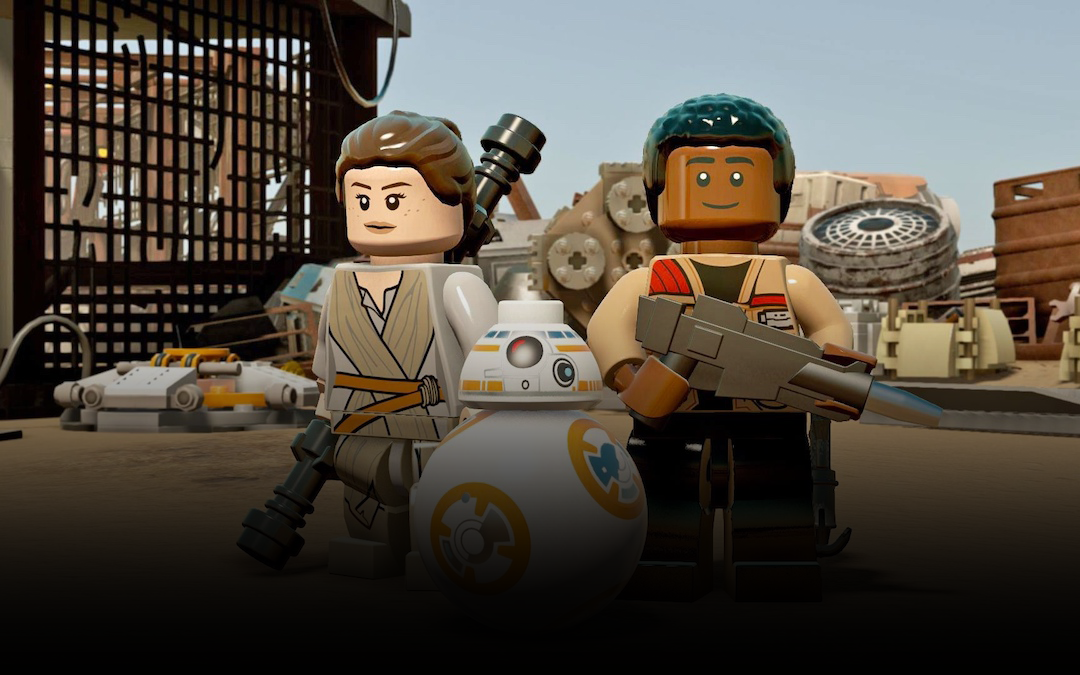 I know, I know. When most of us hear the phrase “Star Wars holiday special,” it causes a Pavlovian response of an immediate cringe. But a new special is on the way to hopefully, finally, wash the taste of the infamous 1978 disaster out of our collective mouth for good. A LEGO Star Wars Holiday Special will be hitting Disney+ on November 17th, and a number of names from the live-action movies and TV series will be voicing their characters. Those names include movie stars Kelly Marie Tran (Rose Tico), Billy Dee Williams (Lando Calrissian) and Anthony Daniels (C-3PO) and voice talent from Star Wars: The Clone Wars TV series including Matt Lanter (Anakin Skywalker), Tom Kane (Yoda, Qui-Gon Jinn), James Arnold Taylor (Obi-Wan Kenobi), and Dee Bradley Baker (various clone troopers). The special will reunite Rey, Finn and Poe, Chewie, Rose, Threepio and Artoo for a Life Day feast. Rey sets off on a new adventure with BB-8 to gain a deeper understanding into the Force, and she’s accidentally hurled through time to various iconic moments in Star Wars cinematic history. But will she make it back in time to celebrate the holidays with her friends?

Warner Bros.’ Black Adam continues to pad out the pieces of its cast. City on a Hill and The L Word actress Sarah Shahi has signed onto the project. Plot details are being kept under wraps, but it’s being reported she’ll play a university professor and freedom fighter leading the resistance in Kahndaq. She joins a cast that recently added The Invisible Man star Aldis Hodge in the role of Carter Hall/Hawkman and before that, To All the Boys I’ve Loved Before‘s Noah Centineo in the role of Al Rothstein/Atom Smasher. Dwayne Johnson, of course, is playing the titular role and has spent the past few years shaping the direction of the project. Rory Haines and Sohrab Noshirvani tag-teamed the latest version of the draft with the previous draft having been written by Adam Sztykiel. It’s currently undated as COVID-19 delays continue to shift around shooting schedules.

Even after playing one of the most recognizable roles in arguably the biggest franchise in the world, Marvel actor Chris Hemsworth still gets excited for certain projects. It was revealed this week he’s been cast in Mad Max: Fury Road spinoff prequel Furiosa alongside titular star Anya Taylor-Joy and Yahya Abdul-Mateen II. And let me tell you, the man is pumped about it. Check out the excited Instagram post he shared after the news broke:

With it being well into fall, parts of the UK and Europe have seen a new wave of COVID-19 hitting their countries. To counter the increased caseload, the UK government has increased safety restrictions and put into place a “tiered lockdown system.” Liverpool, where The Batman is currently filming, is considered a “Tier 3” city under this system, meaning Liverpool is “subject to the most stringent rules due to its high rate of positive cases.” Venues are once again being closed and people are being stopped from socializing. However, local authorities and the UK Film Office are working closely with the Warner Bros. production to ensure it can keep filming while following all safety protocols. It’s been a bumpy ride for The Batman‘s production so far. It was about a quarter of the way through filming when it initially was forced to shut down in March. It finally resumed shooting in late August but had to shut down a second time in early September after star Robert Pattinson tested positive for Covid. Now, it’s resumed filming once again and plans to stay that way barring another necessary shutdown. Third time’s a charm?

It’s amazing what happens to an actor once they’ve signed onto a big project and their star goes supernova. Contract negotiations from that point on are suddenly much more lucrative when they have more leverage and bargaining power. Such is the case for Gal Gadot, who is set to earn 33x times more for Wonder Woman 1984 than the previous Wonder Woman movie, or, for that matter, any of the previous DC movies to date. When she first signed on to the DCEU, Gadot wasn’t yet a household name, with her biggest role to date being Giselle Yashar in the Fast & Furious franchise. Thus, her pay for the first three movies she appeared in was locked in at only $300k per movie, much like a rookie contract in sports. Now that she’s a global superstar, however, her pay for WW84 has jumped up considerably, with Vanity Fair reporting she’s set to earn $10 million. Still not exceptionally high considering some of the massive paychecks we’ve seen superhero stars rake in, but still, it’s a 33x increase from her previous pay – and we can expect her pay for her new Cleopatra project will be considerable, too. Get it, girl.

There are few actors with greater longevity or more beloved than Jackie Chan, and it looks like we’ll get the chance to see him on the big screen again thanks to Gravitas Ventures, which picked up the North American rights to Chan’s Vanguard. It’s set for a pre-Thanksgiving wide release including drive-ins and IMAX on November 20 now that No Time to Die has moved from that slot. Directed by Stanley Tong, the movie is an action-adventure and the ninth collaboration between Tong and Chan. It follows the actions of Vanguard, an elite, covert security company that’s charged with protecting an accountant after he’s targeted by the world’s deadliest mercenary organization. Said Gravitas Ventures senior manager of theatrical distribution Cameron Moore, “Vanguard is a film that fills a fall action-adventure vacancy, with the legendary screen icon Jackie Chan at the forefront. I can’t wait for North American audiences to see this film.” Neither can we.

After the release of The Broken Hearts Gallery, which Selena Gomez executive produced, it appears the multi-talented songstress is keen to continue her relationship both in front of and behind the camera in Hollywood. Gomez has joined STXFilms’ psychological thriller Dollhouse as a producer with an eye to also star. The project, which is touted as being in the vein of Black Swan, is from a script by Michael Paisley and set in the elite circles of New York City’s fashion scene. Gomez will produce through her July Moon Productions, with Shawn Levy and Dan Cohen producing through their 21 Laps banner with their partner Emily Morris serving as executive producer alongside STX’s Patricia Braga. A search is currently underway for a director.

When The Matrix was released in 1999, its visual technology changed Hollywood, ushering in the now-ubiquitous “bullet time” visual effect and elevating what was possible in moviemaking tech. Now, The Matrix 4 star Jessica Henwick says the fourth movie will change the industry again. In a conversation with ComicBook.com, she says some of the things she’s seen on set have dropped her jaw. “There are definitely moment on set where Yahya [Abdul-Mateen II] and I look at each other and we just go, ‘Matrix 4!’ Those pinch me moments. Yeah. Lana is doing some really interesting things on a technical level in the same way that you know, she created a style back then,” Henwick revealed. “I think she’s going to change the industry again with this film. There’s some camera rigs that I’ve never seen before that we’re using. That’s probably all I can say for that.” Wachowski is one of the most exciting directors working in the action genre. We can’t wait to see what she does.

Horror Movie ‘The Others’ Getting A Remake From Universal

Some fitting news for Halloween season: Deadline reports that Universal and Sentient Entertainment are planning a reboot of ghost story The Others. The original horror classic directed by Alejandro Amenábar starred Nicole Kidman in a post-WWII setting as a mother who tries to protect her children as it becomes clear their house is being haunted by a dangerous entity. The Others was a hit upon its release in the summer of 2001, grossing over $200 million worldwide. Part of this was down to it being an early forerunner of the period setting that’s grown more popular in horror movies in recent decades, as well as having one of the all-time great plot twists in horror, which I won’t spoil here. It’s unknown how closely it will adhere to the original storyline or if it will differ entirely. Executives for Universal are currently meeting with writers and hearing pitches.

British actor Oliver Jackson-Cohen’s Hollywood career is picking up recently, with The Invisible Man and The Haunting of Bly Manor on his recent resume along with Maggie Gyllenhaal’s upcoming feature directorial debut The Lost Daughter. But in a conversation with Collider for their Collider Connected series, Jackson-Cohen revealed that his first American role, playing a romantic suitor to Drew Barrymore in 2010’s Going the Distance, almost didn’t happen until Barrymore stepped in. As Jackson-Cohen explained

“I didn’t have a Visa and so Warner Bros. had to get me this Visa and I got denied because I’d only done one job in the UK before. And so Drew wrote a letter. I’d never met her, but she wrote a letter to the immigration Visa people. So I felt like when I turned up, I already owed this person my life! There was a whole point where it’s like, ‘Well, you’re not gonna be able to do the movie because if you can’t get the Visa in time, we can’t keep on pushing the dates,’ and so there was a moment where it was like, ‘I’m sorry, we’re gonna have to let this go.’ I felt like, it wasn’t just like, ‘This is your first movie and this is your first studio movie and you’re working with America’s sweetheart.’ Yeah, it was a lot of pressure, but she was so wonderful to work with, and so supportive. She’s really quite special. I know she now has a show so everyone can kind of see how she just exudes kindness.”

It’s good to have one of Hollywood’s sweethearts on your side.

Sony Pictures Classic has released the first trailer for Sundance award-winning fantasy feature Nine Days. Directed by Japanese-Brazilian writer-director Edson Oda, it stars Winston Duke, Zazie Beetz, Benedict Wong, Bill Skarsgard, Tony Hale, Arianna Ortiz and David Rysdahl. Duke plays Will, a recluse stationed in a remote outpost. He spends his days watching POV videos of people and conducting interviews with potential new people when a vacancy for a new person on Earth opens up. The applicants undergo a nine-day test on Will’s compound to determine who will be selected to become a newborn with the rest ceasing to exist. Spike Jonze serves as executive producer. You can check out the trailer for the film below: