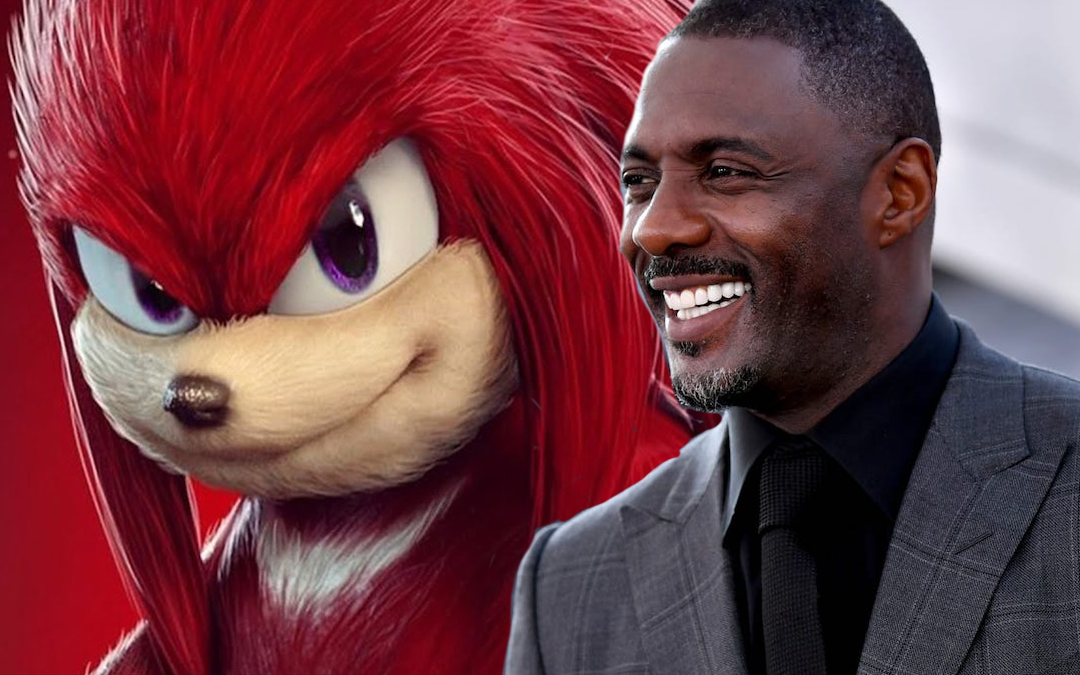 News Of The Week: Idris Elba To Voice Knuckles In ‘Sonic The Hedgehog 2’

Taika Waititi is one of the busiest directors in Hollywood right now, with a number of projects in development. One of those projects is the long-gestating Flash Gordon movie, which Waititi was tapped to write and direct two years ago. Initially, it was being developed as an animated movie, but that has recently changed. In an interview with Collider for Jungle Cruise, producer John Davis offered some updates on the Flash Gordon movie, which he’s also producing. “Taika is writing it. It was a movie that was a huge influence on him growing up,” he explained. “It is one of his favorite movies. He initially said to me, ‘Let’s do it animated.’ I said, ‘Okay.’ Then we got into it and started developing it and he said, ‘No, let’s do it live-action.’ I said, ‘Even better.'” Flash Gordon is a character who initially debuted in a cartoon strip in the 1930s as a handsome polo player and Yale graduate who goes on adventures in outer space. In anyone else’s hands, it might be incredibly outdated and obsolete for a modern audience, but Waititi plans to put his unique stamp on it, says, Davis:

“He has the most fantastically interesting vision for this movie. And you can only know it is Taika. It is what he does. It is the way he looks at the world. He is the greatest guy in the world. He is the funniest guy in the world. And he thinks on a different plane. And this movie embraces everything that’s special about Taika, and his vision. It harkens in a very interesting way to the original conception from the comics…We started kicking around ideas. And so, this is six years in the making, right? So I’ve waited for him a lot, a lot, a lot of time, but his enthusiasm has remained steadfast. And only he’s going to be able to direct this movie because only he should direct this movie. It is special.”

It will be really interesting to see what Waititi does with such a risky IP.

After what feels like 27 years and four false starts, Mission: Impossible 7 has finally wrapped filming–or at least, co-star Rebecca Ferguson has. The actress posted on Instagram that she’d completed shooting her part of the movie and was done, announcing it with a picture of her and Tom Cruise and a sweet caption:

“And That’s a wrap for me on MI7! Thank you my wonderfully talented & tolerant team. photo taken by @christophermcquarrie in between setups.” the caption reads. As Ferguson looks to play another major role in the upcoming Mission: Impossible movie, it can be assumed the entire shoot is almost finished. That’s a day that sometimes seemed as though it would never arrive, with the shoot experiencing multiple delays due to Covid. It was shut down just before it was set to start principal photography, experienced four more filming hiatuses in different locations, one giant fire torching a motorcycle stunt rig, one controversy over potentially blowing up a historic Polish bridge, and one viral Tom Cruise meltdown directed at crew members who didn’t practice Covid safety measures. With the film still set for release on May 27 of next year, that gives it 9 1/2 months from this point for post-production, which is not a lot of time for a movie that will be as CG-heavy as M:I7. Hopefully, there’s enough time to get it all done and that release date sticks.

‘Chronicle 2’ In Development With Female Lead

John Davis has been a fountain of information on different projects during his Jungle Cruise press tour, apparently. Not only did he provide those Flash Gordon updates, he also dropped the interesting news that a sequel to 2012 sleeper hit Chronicle is in development. Speaking to Forbes, he revealed that plans for Chronicle 2, long dormant, are finally moving forward. From what he’s saying, it won’t include any of the characters from the original movie, but will instead follow an entirely new group, this time centered on female leads. Davis seems fairly excited about it, as well:

“We’re working on Chronicle 2 right now, and I think it’s going to be great. We’re working on it at Fox (20th Century Studios). It’s going to give us a chance to tell the story in a different way. We’re going to tell it from the female point of view. It will have been ten years since the event happened in Seattle, and a lot of it’s going to deal with fake news and real news and cover-ups. More interestingly, it’s the next generation getting these powers that are corruptive. These are young women just finishing college, they are empowered, and this is their journey. I mean, what a new and interesting story you can tell there.“

With original writer Max Landis mostly having written himself out of Hollywood due to multiple sexual assault allegations, and original director Josh Trank going through widely-publicized troubles of his own, it can be assumed that not only will the cast be new, so will the writer and director. With the story already being developed, it’s likely they already have a writer on it, but at the moment, it’s unclear who that is.

A few months ago, rumors swirled that Colin Jost might be leaving his Emmy-nominated role as a Saturday Night Live writer and “Weekend Update” anchor in order to pursue more movie and TV work. Now, a new piece of news lends a bit of fire to that smoke. Deadline reports that Jost has been casting around for a notable project to attach his name to and it appears he’s found one: Teenage Mutant Ninja Turtles. Reportedly, Jost and his brother, Casey Jost, have been tapped by Paramount to pen a script for a new TMNT movie for the studio. Jost is also co-writing The Worst Man for Universal, where he’s also set to star alongside his SNL costar Pete Davidson.

Currently, plot details are being kept under wraps for the new Teenage Mutant Ninja Turtles movie, but Paramount clearly still has a lot of faith in the franchise. Currently, the studio also has an animated TMNT movie in development at Nickelodeon with Seth Rogen producing; rumors have also swirled that they’re potentially developing a new Turtles animated series in conjunction with Netflix. Apparently we’re about to get a whole lot more of the heroes in a half-shell.

Idris Elba Set To Voice Knuckles In ‘Sonic The Hedgehog 2’

Idris Elba is having himself a hell of a year. He’s currently co-starring in James Gunn’s critically praised The Suicide Squad, his Western, The Harder They Fall, is hitting theaters in November, he’s gearing up to start filming the spinoff movie based on his hit BBC crime drama, Luther, in September, and now, he has another feather to add to his cap. He dropped a stealthy surprise on everyone this week when he indicated he’d be voicing a major character in Sonic the Hedgehog 2: Knuckles the Echidna.

In the video games, Knuckles was first introduced as an antagonist of Sonic after being tricked by Doctor Eggman. Later, after discovering the deception, he teamed up with the protagonists Sonic and Tails. It seems the movie may loosely follow this arc, with the synopsis reportedly finding Knuckles teaming up with Jim Carrey’s Doctor Robotnik in search of an ancient emerald that has incredible powers. This also follows the games, in which Knuckles is the guardian of the Master Emerald. Interestingly, Knuckles has also been something of comic relief in the games, a role that’s a little hard to envision from the gruff-voiced Elba. It will be really fascinating to see how he plays this role.

Nicholas Hoult Will Star As Renfield In Dracula Spinoff

Idris Elba’s not the only busy actor in Hollywood. Less than a week after landing a co-lead role in Searchlight’s darkly comedic thriller The Menu, Nicholas Hoult already has his next project lined up. Deadline reports he’ll be stepping into the titular role of Dracula spinoff Renfield. Chris McKay (The Tomorrow War, The Lego Batman Movie) is directing with a script written by Ryan Ridley (Rick and Morty) off a story outline by The Walking Dead‘s Robert Kirkman. The movie will be told from the perspective of Dracula’s unstable henchman, who, in the original Bram Stoker novel, was locked in an insane asylum and thought to suffer delusions until it was revealed he was actually Dracula’s servant and acolyte. Numerous takes on Renfield have been brought to the big screen over the years, from the tragic to the comedic. Plot details haven’t been revealed, but it’s believed that the movie will be set in present day rather than the 1800s like the novel.

However, with McKay at the helm, Ridley on the script, and Kirkman shaping the story, it’s likely it will be a strong blend of horror and comedy. Though Universal has other higher profile movies in development, like Leigh Whannell’s remake of The Wolf Man with Ryan Gosling in the lead, Karyn Kusama’s take on Dracula, or James Wan’s reimagining of Frankenstein, the studio is reportedly all in on the Renfield project thanks to its great script. Hoult has certainly proven himself adept with comedy, with his daffy take on Peter the Great stealing every scene in Hulu’s The Great. He’ll next be seen in season 2 of that series, which is set to premiere on November 19th.

Marvel does it again.

It was only a matter of time before we got Clint Eastwood in at least one last Western.

Prisoners of the Ghostland – Official Trailer

Few things have been better than this Nicolas Cage late-stage weird career Renaissance.

A Journal for Jordan – Teaser Trailer

Michael B. Jordan is great in literally everything, no matter the movie.

And in case you missed it last week…

Please let Woody Harrelson be as nuts as Cletus Kasady as I am hoping.