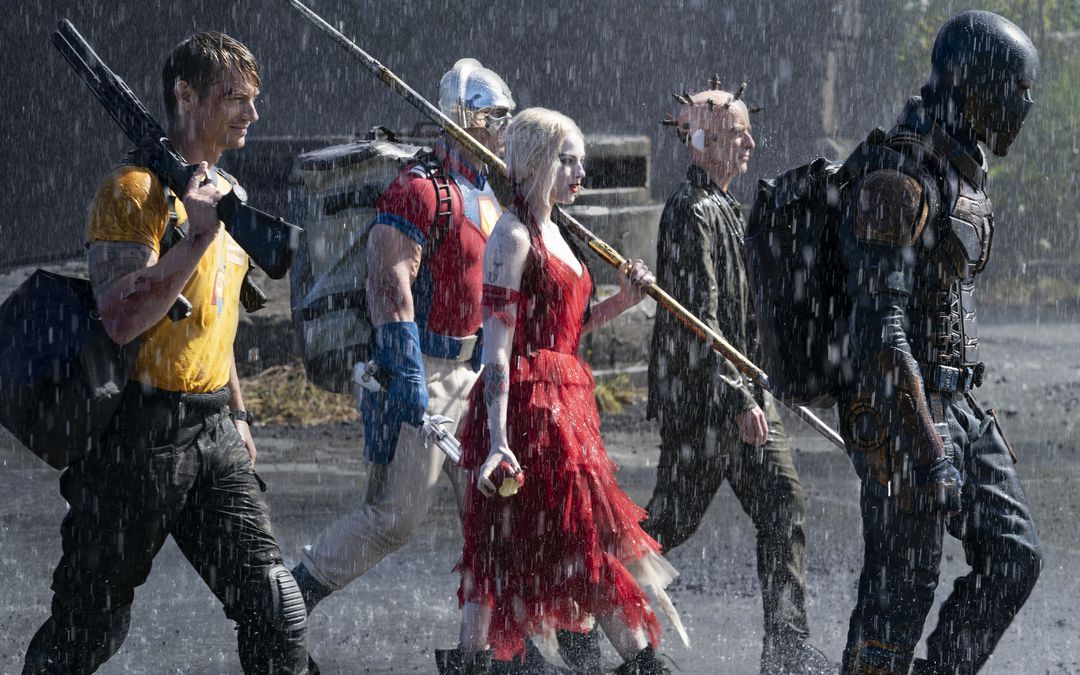 The Suicide Squad: Everything You Need To Know (Including Who’s Who)

August is here, and so is James Gunn’s The Suicide Squad. “Wait,” you might be asking, “wasn’t there already a Suicide Squad movie that came out a few years ago? Is this a sequel?” The answers to those questions are yes and…well, sort of. It’s true there was the Suicide Squad movie that came out in 2016 and originally, a direct sequel was planned before its release. But that movie, directed by David Ayer, was something of a mess thanks to a troubled production and Ayer has said since his director’s cut of the movie was nothing like the final theatrical version.

Fast-forward a few years and at least half a dozen directors later and James Gunn is on board with a new Suicide Squad movie that’s as much a reboot as it is a sequel, with a few actors (Margot Robbie, Joel Kinnaman, Jai Courtney, and Viola Davis) returning from the first movie, but the cast otherwise being brand-new and with an unconnected story. It still follows Task Force X, however, the squad of prisoners conscripted by the U.S. government as an elite black-ops squad who are sent to do the dirtiest jobs and most suicidal of missions. Gunn has said this is the biggest film he’s ever done, and from the trailers, it appears it. Despite its size and scope, however, Warner Bros. has done an extremely good job of keeping a lid on the details.

With an enormous cast and a crazy story, here’s everything you need to know about The Suicide Squad before it hits theaters this Friday.

Was The Suicide Squad’s Release Date Affected By The Pandemic?

Surprisingly, no. With dozens and dozens of movies getting their release dates bumped around, The Suicide Squad is the second big-budget studio tentpole in the past year and a half to not have its release date affected by the COVID-19 pandemic (Space Jam: A New Legacy was technically the first). Due to fortuitous timing, it happened to complete production and have a release date set at the exact right times. Filming wrapped at the end of February 2020, just before lockdown, and James Gunn was editing the film by April of last year. The release date is this Friday, August 6.

The cast list of The Suicide Squad is eye-poppingly extensive, with James Gunn dipping deep into DC’s library to bring fourth-string comic book characters to the big screen. The cast and characters include:

Margot Robbie as Harley Quinn – a.k.a. Dr. Harleen Quinzel. The brilliant former psychiatrist who was gaslit and fell in love with Joker when acting as his therapist at Arkham Asylum. Harley has appeared in two other DCEU movies to date, including the first Suicide Squad and criminally underrated Birds of Prey.

Joel Kinnaman as Col. Rick Flag – A former colonel and the field leader of the Suicide Squad. In Gunn’s version, Flag will reportedly be less serious and jaded than his version in the first movie.

Viola Davis as Amanda Waller – The director of government organization A.R.G.U.S. and the hard-nosed, no-nonsense director of the Task Force X program.

Jai Courtney as Captain Boomerang – a.k.a. George “Digger” Harkness. He’s Australian, he’s unhinged, and he’s back. As Courtney himself said of his character in Gunn’s movie, Captain Boomerang is “the same shitbag liability we came to learn about in the first one. He’s out there causing trouble as you would expect.”

Idris Elba as Bloodsport – a.k.a. Robert DuBois. A mercenary with an advanced suit and weaponry, who is currently in jail for almost killing Superman with a Kryptonite bullet. He agrees to join Task Force X to shorten his prison sentence and reunite with his daughter.

John Cena as Peacemaker – a.k.a. Christopher Smith. Basically a militant, douchey Captain America, Peacemaker is determined to achieve peace at any cost–even if he has to murder multiple people to achieve it.

Sylvester Stallone as King Shark – a.k.a. Nanaue. A human-shark hybrid who is both one of the dumbest characters in the movie as well as one of its most vicious killers. He will immediately be an audience favorite.

Peter Capaldi as The Thinker – a.k.a. Gaius Grieves. He’s a brilliant mastermind and a genius intellect. The Suicide Squad forces him to work with them, but can they trust him? Probably not.

Flula Borg as Javelin – a.k.a. Gunter Braun. He’s a former Olympic athlete who wields javelins as his weapons.

Daniela Melchior as Ratcatcher 2 – a.k.a. Cleo Cazo. She’s a clever bank robber who inherited her father’s powers of being able to control and communicate with rats. Interestingly, Gunn has described her as “the heart of the film,” and from the trailer, it seems that could be the case.

Taika Waititi as Ratcatcher – The first Ratcatcher, Cleo’s father. She earned her nickname from him, as well as her ability to communicate with rats.

Michael Rooker as Savant – a.k.a. Brian Durlin. A genius computer hacker and vigilante activist. Considering it’s Rooker and this is a James Gunn movie, you may not want to get too attached.

David Dastmalchian as Polka-Dot Man – a.k.a. Abner Krill. He was an experiment gone tragically wrong who now has the power to throw polka dots at people. His morose and chronically gloomy character will surely bring some of the biggest laughs of the movie.

Mayling Ng as Mongal – No a.k.a. or real name here. Mongal is an extraterrestrial being with genocidal tendencies and is prone to mass murder.

Nathan Fillion as TDK – a.k.a. Cory Pitzner. One of the weirdest characters in DC comics, TDK stands for The Detachable Kid, and his powers are exactly what you might guess: he can detach his arms from his body to use them as bludgeoning weapons.

Pete Davidson as Blackguard – a.k.a. Richard “Dick” Hertz. A mercenary who is actually terrible at his job as he’s easily manipulated into ruining his own schemes. He’s definitely a liability.

Sean Gunn as Weasel AND Calendar Man – One again, James Gunn’s brother comes through in the clutch. Weasel is an anthropomorphic, human-sized weasel who barely knows what’s going on around him. Gunn also plays Calendar Man, a DC villain who is known for coordinating his crimes to coincide with holidays.

Joaquín Cosío as Major General Mateo Suarez – The Major General of Corto Maltese, a small island off the coast of South America. In the comics, it was the site of a rebel uprising against the government.

Alica Braga as Sol Soria – The leader of a rebel faction on Corto Maltese.

Storm Reid as Tyla – Bloodsport’s daughter. Reid has described her character as being “a little spicy,” and that she has a little bit of sass and swag, so she’s hardly a helpless kid.

Steve Agee as John Economos – A warden of the Belle Reve penitentiary where the Suicide Squad members are incarcerated, as well as an aide to Amanda Waller. Agee was also the on-set stand-in for King Shark.

Tinashe Kajese as Flo Crawley – In the comics, Flo is Amanda Waller’s cousin and the coordinator of Task Force X’s missions.

Jennifer Holland as Emilia Harcourt – An aide to Amanda Waller.

Gunn has previously described The Suicide Squad as a war movie, and, if it even loosely follows the Corto Maltese storyline from the comics, it’s easy to see why. In the comics, the rebel uprising on Corto Maltese was backed by the U.S. in order to topple the fascist government. Unfortunately, the government was being propped up by Russia, then the U.S.S.R. Things go from bad to worse when the U.S.S.R. sends a missile at the island, which Superman deflects, but sends to another part of Earth. It’s highly unlikely that Superman will be showing up here, but the synopsis certainly hints at the rest:

“Trekking through a jungle teeming with militant adversaries and guerrilla forces at every turn, the Squad is on a search-and- destroy mission with only Colonel Rick Flag on the ground to make them behave…and Amanda Waller’s government techies in their ears, tracking their every movement. And as always, one wrong move and they’re dead (whether at the hands of their opponents, a teammate, or Waller herself). If anyone’s laying down bets, the smart money is against them—all of them.“

What Is The Suicide Squad Rated?

Unfortunately for those parents wondering if their young kids can see it, The Suicide Squad is rated a hard R. Every bit of that R rating is earned, too, with it being hit with the R for “strong violence and gore, language throughout, some sexual references, [and] drug use and brief graphic nudity.” Make of that what you will and know before you go that this isn’t going to be a (relatively) family-friendly Marvel or DC movie.

The Suicide Squad is in theaters Friday, August 6.

Get tickets to The Suicide Squad.