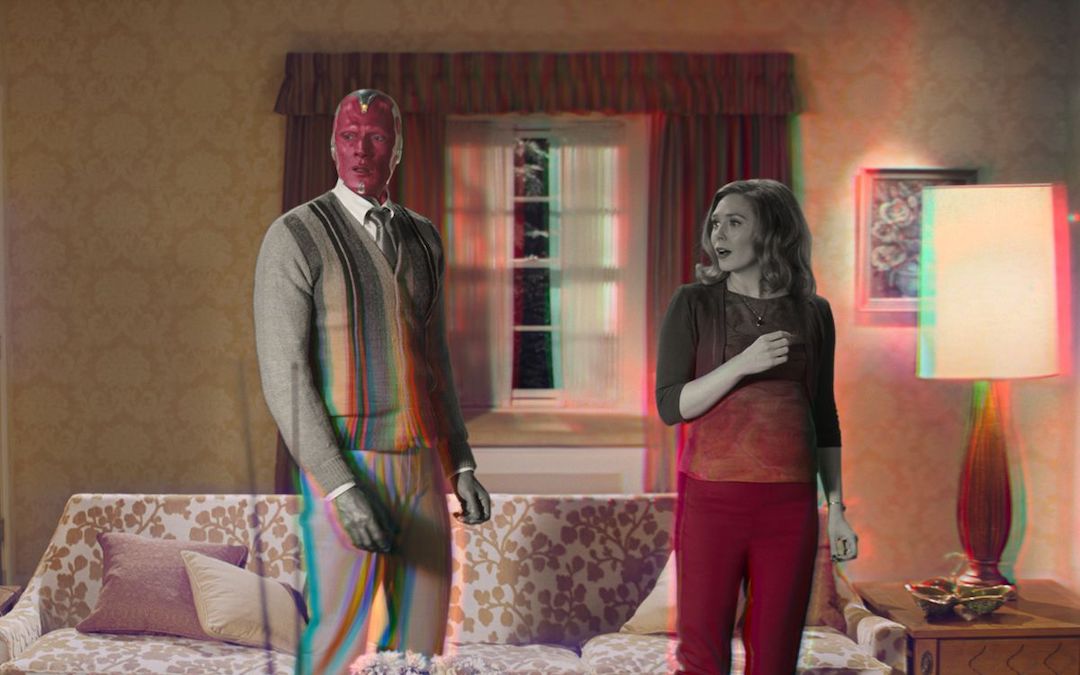 Some bad news and some good news on the Marvel front this week: Disney+ series WandaVision, which was originally going to drop in December, has now been pushed back to a January 15, 2021 release. The move appears to be Disney wanting to pace themselves and spread out the drops of big original projects, such as Pixar’s Soul, which hits the streaming platform on Christmas Day, and see The Mandalorian Season 2 wrapping before launching the platform’s flagship Marvel series.

So that’s the bad news. The good news is, we got a whole mess of information about the Marvel series thanks to a big Entertainment Weekly spread. According to the new details, WandaVision is set to impact the entire Marvel Cinematic Universe moving forward. We’ve already known for a while the Disney+ series will tie in closely to the movies, but they might be even more integrated than we realized, specifically WandaVision.

It was reported months ago that WandaVision would tie directly into Doctor Strange in the Multiverse of Madness, with Elizabeth Olsen reprising her role of Scarlet Witch in the movie. But Marvel Studios head Kevin Feige says that while the show will be standalone enough for casual viewers to watch it, it also has close ties to a number of storylines in the MCU, both in the past and in the future.

“If you haven’t seen any [Marvel Cinematic Universe movies] and just want to step into this weird thing because you love The Dick Van Dyke Show, it’s going to work,” Feige said. “But if you’ve been tracking the 23 movies we’ve made and following along the stories into Phase 4, there’ll be a wealth of rewards waiting for you as it all unfolds.”

It’s already near-certain that Scarlet Witch will be the catalyst for the multiverse Marvel seems to be setting up. Stephen Strange can jump in and out of multiple dimensions, but Wanda Maximoff can quite literally warp reality. It’s a formidable power we haven’t seen explored in the movies yet, but it’s not unreasonable to think WandaVision is the live-action version of the Avengers Disassembled storyline from the comics, in which Scarlet Witch goes mad with grief after the loss of her children with Vision and warps reality to the point it almost destroys the Avengers, and the House of M storyline, in which Wanda warps reality to grant all the Avengers their hearts’ desires. Two way the show could go, both of which have potential ramifications for the movies moving forward. 1. In her grief over losing him, Wanda creates a sitcom world in which she and Vision can live happily and in domestic bliss or 2. She somehow taps into an alternate sitcom-based world in which some version of Vision still exists.

Either way, it will be crazy and potentially indicates that Marvel is ready to get truly daring with their approach, not just in the Disney+ series but also in the movies. In an interview from earlier this year, star Paul Bettany explained WandaVision is “bonkers.” As he said at the time

“Yes, I’m back for WandaVision… I am such an admirer of Kevin Feige, he has taken such a risk with the show, and the concept of this show. It’s beautifully written by [Jac Schaeffer] and her staff of writers – and it is f*cking bonkers. I mean it’s so out there and nuts, the choices that they are making. And fans will not have to wait that much longer… they’ll much more of an insight, very, very, soon as to what it may look and feel like.”

Feige’s comments to EW indicate that the creative freedom they had with WandaVision may spill over onto the big screen, too. “It really energized everyone creatively at the studio, the notion that we could play in a new medium and throw the rules out the window in terms of structure and format,” he explained.

It’s also worth noting that WandaVision has been described as six movies in one show, with star Teyonah Parris, who plays a grown-up Monica Rambeau in the series, saying she hadn’t anticipated how high-level it would be. “I was like, ‘Oh, I thought we were doing a little show,’ but no, it’s six Marvel movies packed into what they’re presenting as a sitcom,” she said. The first trailer for the series, which dropped during the Primetime Emmys, racked up an eye-popping 53 million views in its first 24 hours, a record for a trailer for a streaming platform.

If WandaVision is successful, it may lay the groundwork for them being more flexible and weird with the movies. Of course, it’s entirely possible that they’ll keep the Disney+ series as the truly experimental format, but it would be nice to see some of that cross over into the movies, as well.

In any case, we’re even more excited than we were before for WandaVision, and for what Marvel is bringing our way in 2021.