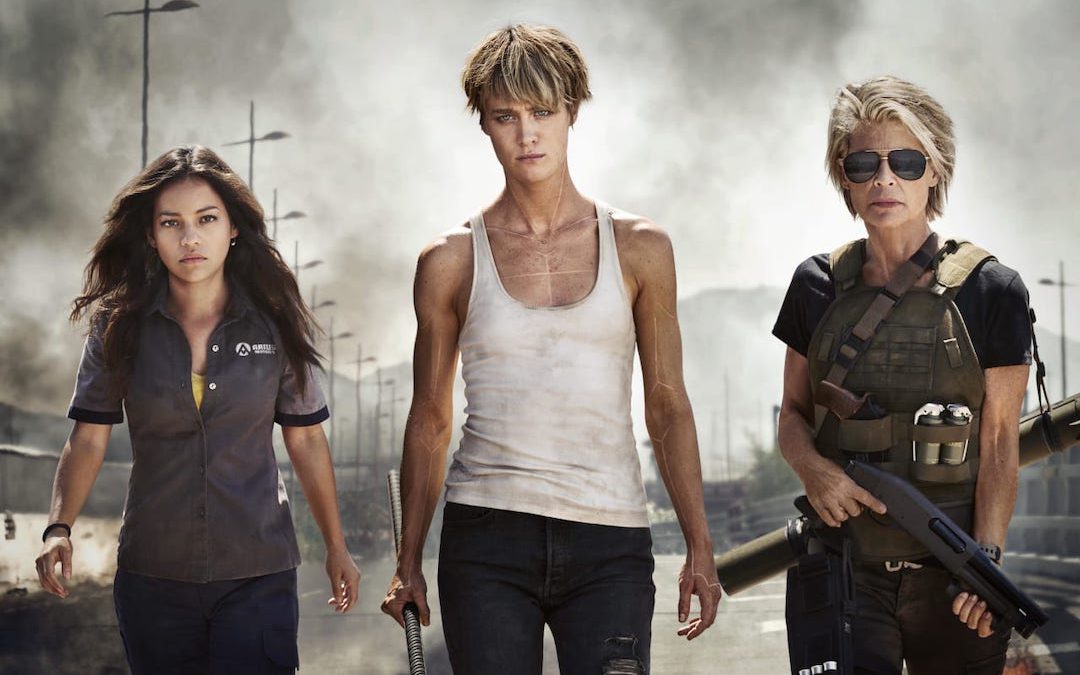 For those Terminator fans left wandering a road paved by lackluster sequels, rest easy knowing Terminator: Dark Fate is the best franchise entry in years. As someone who wouldn’t fry another synapse on Salvation or Genisys, Dark Fate is leaps and bounds ahead of both time-warp scenarios. Reach outside the cybernetic world James Cameron created and we’re talking about another generic mainstream action churn, but hey, celebratory news is hard to find these days. Why not recognize a small victory?

The last we saw of Sarah Conner, 1997’s “Judgement Day” became a figment of future imaginations thanks to her heroic efforts. Unfortunately, Sarah’s thwarting of Skynet’s uprising merely delayed the inevitable. In a future much like the one Connor once prevented, a new A.I. called “Legion” has decimated humanity. Just like in the past, a single human could be the key to successful resistance so Legion takes no chances. A “Rev-9” Terminator (Gabriel Luna) is sent back to present-day Earth with instructions to exterminate Dani Ramos (Natalia Reyes), so the future-survivors send back a hybrid human/automaton (Grace, played by Mackenzie Davis) as Dani’s bodyguard. Can she protect Dani long enough to (once again) save the future? With a little help from Sarah Conner (Linda Hamilton) and “Carl” aka T-800 (Arnold Schwarzenegger), the odds aren’t their slimmest.

Terminator: Dark Fate is in theaters nationwide, so let’s cut right to three reasons why you should see this latest installment of mechanized mortal combat.

The girl-gang optics of Tim Miller’s Terminator: Dark Fate road trip are a tremendous look with Mackenzie Davis leading the charge. You wouldn’t peg the Canadian starlet as action-heroine material upon first glances, but Davis is an accentuated standout from the moment she whoops some Mexican police officer booty (while nude). Grace is a human who’s been upgraded with robotic enhancements – superstrength, upticked agility, etc. – which allows Davis to be an empathetic but fiery guardian. She’s no slab of muscles and monotone dialogue. Davis’ tomboy appearance (always snatching men’s clothes) and mission-dedicated intensity show a new persona for the undercover badass.

I say this knowing how both Linda Hamilton and Arnold Schwarzenegger return to the fray, but this is Davis’ show. Hamilton plays a jaded, self-medicating Terminator hunter who reconciles tragedies of her past through violence, crackpot conspiracy theories and drinking until she blacks out. Schwarzenegger returns as a T-800 with an adaptive conscience after years of orderless living, and as comedic relief (with mixed to failed results). Hamilton chews the scenery as many a leathery “veteran” has cussed through and Schwarzenegger does his past-prime T-800 thang – Natalia Reyes’ Dani a constant beacon of hope – but Davis is the draw here. An ass-kicking, chain-swinging, legitimate “iron woman” who wears savage beatdowns as a badge of honor.

In the spirit of mass destruction, Terminator: Dark Fate features enough of the action vehicle James Cameron once drove. Miller is tasked with filming Terminator vs. Strong Terminator warfare in nosediving cargo planes (while aflame), caught in forceful underwater currents, and sometimes on boring Texas soil. When Davis is at her best, Miller’s action packs an altered punch that reduces Luna’s “Gabriel” to a puddle of blackish symbiote goo (yes, Luna is basically playing “Venom Terminator”). Luna’s Rev-9 mercilessness via collateral deaths and Davis’ efforts to subdue the soulless robotic beast are the film’s highlight combat moments. Two modded-out warriors demolishing their way through humanity until one physically cannot piece themselves back together.

Then again, Miller’s reliance on “digital Luna” highlights a mainstream action fad I can’t wait to see die: computerizing human characters so they can move faster, jump higher, and go wilder. The negative to all this? Luna’s animated stunt double looks like garbage, somewhere in the realm of an early PS2 cutscene. You’ve got Mackenzie Davis smashing Gabriel Luna into automotive factory equipment, bashing scenery Fast & Furious style, only for Luna to appear as a blurry figure that detracts from visual engagement. I get it. Save on fight choreography planning and actor inclusion, but it’s such a poor representation. You can’t manufacture Terminator-level excitement through binary codes, which is proven time after time throughout Miller’s murky vision. But when it works, it really works.

As Grace, Sarah, and “Carl” (lol, gets me every time) stand between Rev-9 and Dani, there’s a momentary high of nostalgia that doesn’t pander, introducing new blood into an existing formula. Essentially, Terminator: Dark Fate is just a rehash of an ongoing protection calculation that’s simplistic and predatory. A Terminator is sent back through time, must hunt a living target who threatens future conquests, and there’s a fight to keep said bounty alive. Nothing crazy, and Miller’s grasp of such rehashing reinvents the idea when allowed to breathe. The fun is in the chase, and by “fun,” I mean “watching Mackenzie Davis frantically do battle with an unstoppable killbot from the future.”

Granted, pandering to past franchise notes isn’t always as effective. T-800’s confession of conscious thought plays into a larger arc that diverts timelines in a way that hardly feels earned. Hamilton’s direction of the film towards a more female-centric focus isn’t the feminist swing scripting presumably thinks, given little depth beyond “what if heroes, but ladies!” There are problems in Terminator: Dark Fate that stretch far beyond franchise redundancies, but those who’re just praying their favorite beloved and maligned sci-fi franchise will make some form of a comeback, here ya go! “Terminator franchise good” should be enough to either sell or deter you from Terminator: Dark Fate. It’s not the height reached by Terminator 2: Judgment Day, but then, is anything? I’ll take it.

Terminator: Dark Fate is in theaters now. Get tickets here.