Each week on Atom Insider, we break down the box office numbers for all of the biggest films opening in theaters. This week, 1917 easily ran away from the rest of the pack, but Star Wars: Rise of Skywalker and Jumanji: The Next Level were both solid holdovers from the holidays. 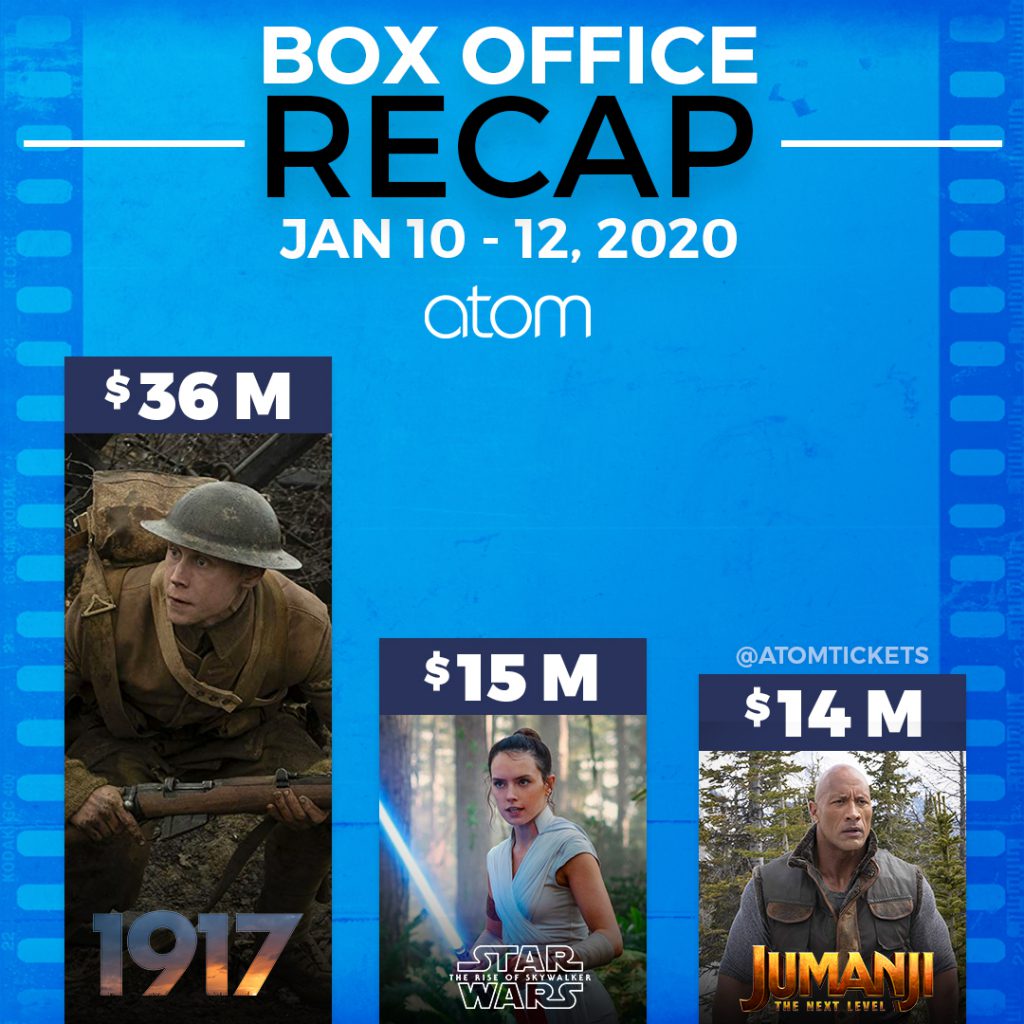 Thanks to great reviews and strong word-of-mouth, 1917 dominated the box office in its expansion from limited release to wide release this weekend. Sam Mendes’ “one-shot” war movie made $36.5 million this weekend, an impressive haul in the first weekend back from the holidays. Worldwide, it’s at $63 million so it still has a way to go to earn back its $90 million budget. Still, the handful of Oscar nominations it gained today should give audiences even more of a reason to see it.

No other tentpole wide releases this week as, again, we’re in the slow times post-holidays. The second and third spots on the list were unsurprisingly two wide-release tentpoles that have already been out for a few weeks each: Star Wars: The Rise of Skywalker came in at #2 with $15.1 million, bringing its worldwide total to $989.9 million. We can expect it to hit the billion-dollar threshold after this weekend. Jumanji: The Next Level came in third with $14 million for a cume so far of $671.1 million. That’s still a ways off from the first movie’s final $962 million haul, but it’s still a respectable number and almost guarantees a third movie.

Paramount’s Like a Boss was the other wide release this weekend but it didn’t even crack the top three, coming in fourth with $10 million. It’s not a lot, but considering the budget was only $29 million, it might break even, especially if word-of-mouth is good. In fifth place was Just Mercy, which also brought in $10 million in its expansion week. It originally opened in four theaters and last week was ranked #30 on the box office list, so consider this a big jump.

Two female-powered films are in the next group: Greta Gerwig’s Little Women, which just got six Oscar nominations, is #6 with $7.65 million and Frozen II, which got snubbed for nominations, is #8 with $5.76 million. However, #7 is something of a disappointment: Kristen Stewart-led horror movie Underwater saw its release this weekend but tanked with only $7 million. Worldwide it’s made $14.4 million, however, so depending on whether or not the budget is low enough, Fox might at least break even on it.

Rounding out the last two spots is Knives Out with another $5.7 million at #9. Rian Johnson’s delightful whodunit has pulled in a global total of $265.4 million on a $40 million budget, making it a legitimate hit for Lionsgate and proof that original, midbudget films still have a place in Hollywood if they are good. Last, but not least, is Dreamworks’ animated Spies in Disguise with $5.1 million. Worldwide, it’s only made $115.7 million so far, so don’t expect any sequels any time soon.

Four films fell out of the Top 10 this week, though most shouldn’t be a surprise. First is the Safdie brothers’ Uncut Gems, which fell from #8 to #11. The fact it was snubbed across the board for any Academy Award nominations is a headscratcher, especially Adam Sandler being snubbed. But at least it added another $3.5 million to its total as the biggest release in A24’s history.

In only its second week in theaters, Sony’s The Grudge plummeted seven spots from #5 to #12 with $3.5 million. Not great for the horror remake. Bombshell, well, bombed from ninth to thirteenth place with just $1.5 million. Worldwide it’s only made $29.6 million for Lionsgate, showing the world is perhaps not yet ready for sympathetic stories about the women of Fox’s empire.

And last, Cats, which was only in 10th place last week, dropped all the way to #17 on the list. Yikes.