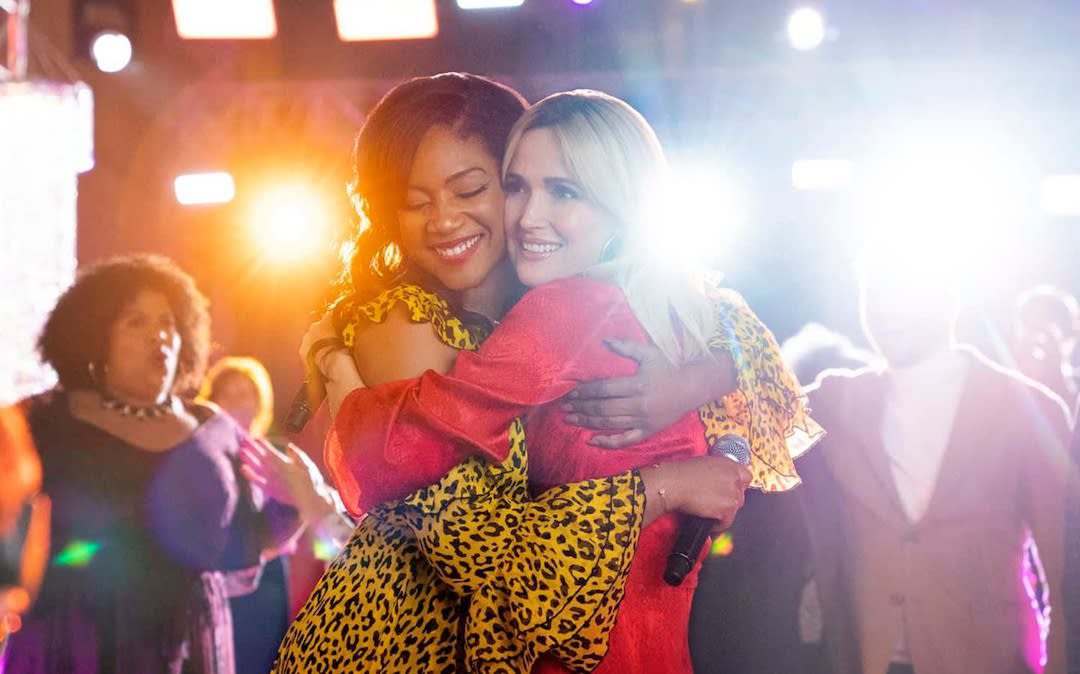 ‘Like A Boss’ Review: Three Reasons To See It

Coming just in time to be a palate cleanser after the stresses of the holidays, Paramount’s Like a Boss arrives to inject some comedy into theaters.

Rose Byrne, who started out gunning for Kiera Knightley’s career before doing a hard swerve to become a comedy queen, plays Mel, an uptight pushover who is a numbers whiz. Tiffany Haddish, the gloriously human machine gun of raunchy one-liners, plays Mia, her best friend since middle school and more outgoing half. The pair are co-owners of Mia & Mel, a custom makeup company struggling to get out of debt. Mia’s the creative force behind the biz and Mel is the one that keeps it running. When Mia & Mel’s debt threatens to crush them, ruthless makeup maven Claire Luna (Salma Hayek) swoops in and offers to invest in their company. But there are strings attached to the deal and it soon causes a rift between the lifelong friends.

If you’re wondering what to watch this weekend, consider drinking from the bubbly glass of rosé that is Like a Boss. Here are three reasons to see it when it hits theaters.

It seems like there are two kinds of relationships between women portrayed in comedies: 1. shallow “You go, girl!” cheerleaders or 2. catty backstabbing. Rarely are the friendships between women in comedies ever portrayed with depth or nuance like they are in Like a Boss. That’s not to say there aren’t moments of cheerleading or cattiness as they definitely exist, but they’re balanced out with a surprisingly meaningful backstory to Mia and Mel’s friendship, and a strong supporting cast that also shows what the friendship dynamic is like among a group of women rather than just between two people.

Friendships between women are powerful things, bonds that tend to mystify most men with their intensity and emotional intimacy. The dynamic between Mia and Mel is truly a ride-or-die relationship. They champion one another but it goes beyond mere shallow cheerleading; they share the sort of mutual support that is found only between people who understand each other down to their last atoms and accept the other for who she is. But more than that, they know one another’s flaws, the deep insecurities and bad behavior that equally define a person as much as her strengths. A casual friend will never ever voice these things aloud. A great friend, however, will when it’s time to deliver a dose of necessary brutal honesty. 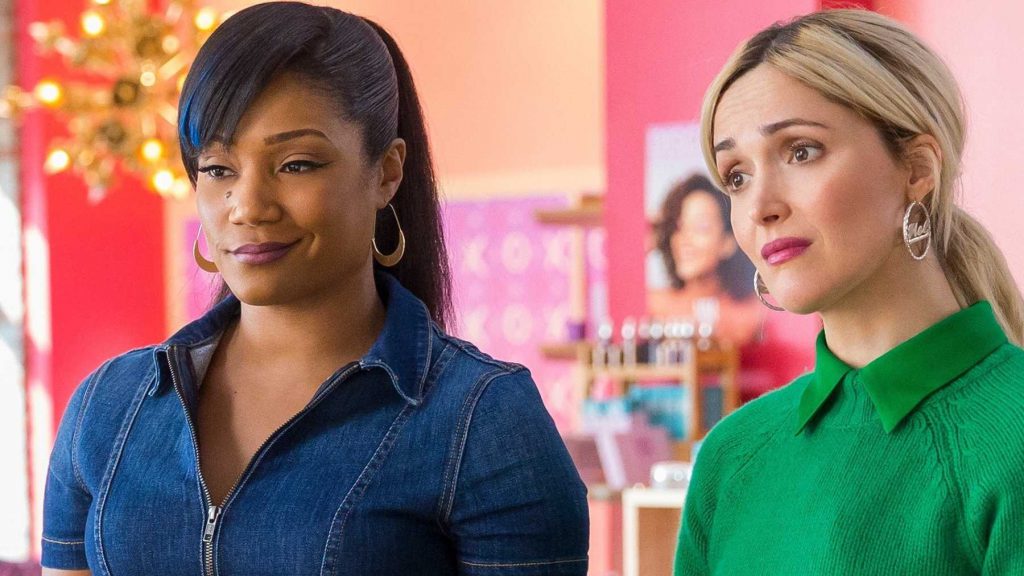 And there’s not a woman alive who hasn’t vented to her other friends, as Mel and Mia both do, when she’s mad at another friend. To Like a Boss‘ credit, instead of the pair engaging in mean-spirited shit-talking to their mutuals about each other, it flips the script and shows another very real aspect of female relationships: Mia and Mel’s girl gang gently puts them in their places; good friends are the ones who tell you when you’re being an a-hole – but make it clear it’s coming from a place of love. Because that’s another truth of female friendships that most men will never understand: We don’t just vent about our friends to get others to sympathize with our perspective; we also do it because we know our friends will tell us if our perspective is wrong.

So much of what we see in comedies between women is one-dimensional and rarely what real friendships between women are like but Like a Boss goes a long way toward negating that.

Look, Like a Boss doesn’t rewrite the formulaic script of a comedy. As far as the story itself goes, it’s a paint-by-numbers offering that offers no surprises or evolution of the genre. But it does offer some genuinely funny moments thanks to the strong comedic performances of the cast. Rose Byrne so often seems to get typecast as a wallflower, but you’ll be hard-pressed to find another actress who better sells moments with herself as the punchline than Byrne. She knows her comedy lane and she excels in it. Meanwhile, Tiffany Haddish is – honestly, God bless Tiffany Haddish and her foul mouth. She is the id of all women, saying the raunchy things we all think and talk about to our girlfriends – the only difference is she says them aloud and in public.

There are a few awkward beats I felt dragged a little too long. It’s definitely my own personal taste in comedy and a matter of what does and doesn’t tickle my funny bone, but scenes in which the humor hinges upon an otherwise normal person suddenly being completely socially inept generally fail to pull laughter out of me. It works if the character is already inherently weird, like Mia and Mel’s deeply odd employee played by the forever-underrated Jennifer Coolidge, who has made a career of playing oddballs. But humor never personally works for me if it’s completely contrived. Instead, I found the funniest moments of the movie were the ones rooted in reality, whether truth bombs from Mia or in the brutally honest interactions between the group of friends. Luckily, there is plenty of that sort of relatable humor sandwiched in between the physical comedy and awkward banter.

3. Put Billy Porter In Everything Already 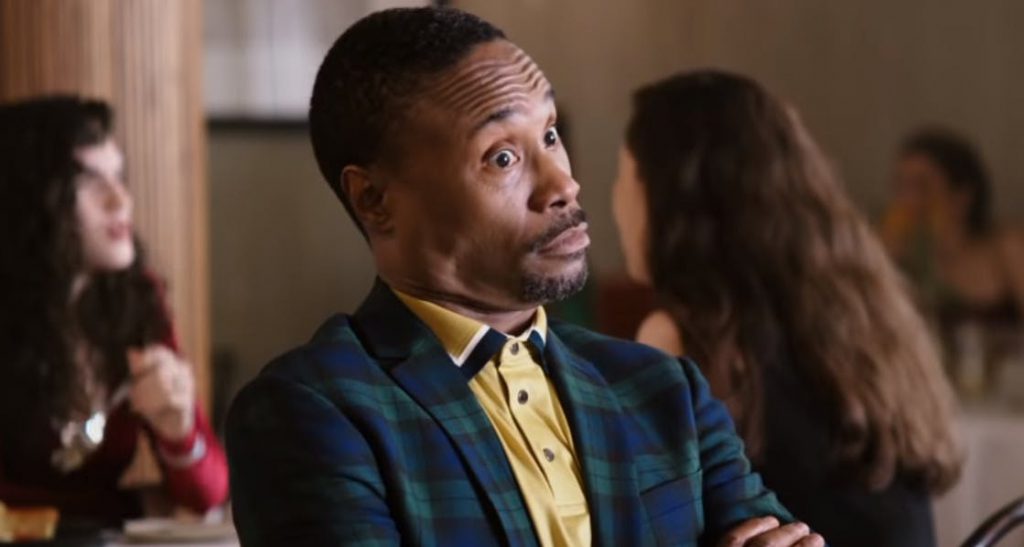 Billy Porter as Barrett in ‘Like a Boss’ (Courtesy: Paramount)

Is there anyone who has had a better past year than Billy Porter? The singer-actor’s career has blown up in the past two years, but he only truly blew up to a larger audience last February, when he absolutely slayed it at the Oscars and stole the red carpet in an immediately iconic tuxedo dress. He arrived, honey.

Porter’s penchant for making headlines for serving flamboyant and creative looks belies the fact that he’s a gifted actor. Sure, Broadway fans have known of his talent for years, but it wasn’t until he joined the cast of American Horror Story and then Pose that the rest of the world learned the man could act. He steals almost every one of his scenes in Like a Boss, which is really saying something considering he shares every single one of them with Byrne, Haddish, and Coolidge, three veteran comedy actors. Consider the scene in which he gets fired (it’s in all the trailers and thus not a spoiler): The way Porter delivers the line “Witness. my. tragic. moment.” is an all-timer; he absolutely shuts down a squabbling Mel and Mia who, to that point, were the comedic centerpiece of the scene. From that moment, it’s as if he says, “Thank you, I’ll take that!” before snatching the shine away from Haddish and Byrne and completely taking over the scene. It’s a delivery that is destined to be given the meme treatment and immortalized. And he gives us a glimpse of his compassionate acting in a scene in which he has a come-to-Jesus talk with Mia and sets her straight about her relationship with Mel.

I, for one, would love to see Porter get more face time on the big screen. Television is great, but someone needs to give Porter the opportunity to sink his teeth into a dramatic role, or take the lead in his own comedy. Someone, anyone, please put this man in more things.

Like a Boss isn’t going to win any awards for originality or reinventing the wheel. But as far as a good time at the movies goes, it delivers. Grab your gang and have yourselves a fun night out.

Like a Boss is in theaters on January 10th. Get tickets here.