One of the beautiful things about being human is that we get to choose our friends. Hopefully, we find the friends who support and uplift us but who also challenge us to be better versions of ourselves, the ones who keep us from making bad decisions or continuing destructive patterns, who real-talk us when we need it. If you’re lucky enough to have someone like that in your life – and smart enough to listen – it results in growth, emotional maturity, and evolving overall as a person.

Uncut Gems‘ Howard Ratner is the living embodiment of what happens when a person grows into middle age without that kind of support and without the intelligence to seek it out.

In the Safdie brothers’ latest, Adam Sandler plays Howard Ratner, a New York City jeweler and gem dealer who is attempting to pull off the hustle of his lifetime, borrowing from loan sharks and the mob in order to finance buying a monster opal direct from an African mine. What follows is a tense, nauseating game of three-card monte with Howard shuffling around money he doesn’t have, borrowing from one unforgiving corner to repay another and never smart enough to cut his losses. Things take a turn for the worse when his friend-slash-leech, Demany (LaKeith Stanfield) convinces Howard to let Kevin Garnett – yes, the NBA player – borrow the opal for good luck with the promise to return it before the exclusive auction that’s set to be Howard’s ticket to a huge payday.

Sandler’s performance is a revelation in the film, a genuinely Oscar-worthy turn as the simultaneously conniving and naive jewelry dealer. His lack of self-awareness is not the defense mechanism of a man who simply doesn’t want to deal with the unpleasant realities of life, but profound and impenetrable. An unquestionable architect of his own demise convinced he is the infallible architect of his inevitable success, a small man without the smarts or savvy to step into the big time certain he’s clever enough to pull it off.  As an audience member, it is infuriating to watch. As an acting performance, it’s a career-definer.

Sandler’s career of churning out movies based around SNL characters and dumb comedy belied the fact there was a serious actor underneath. His brilliance as a dramatic actor was unveiled with 2002’s Punch-Drunk Love, a reinvention for the comedian everyone knew for his lowbrow humor. Uncut Gems is a return to dramatic form for Sandler, and a performance worthy of Oscar consideration. A Shakesperean tragedy masquerading as a modern drama, Howard’s fatal flaws and self-destruction rank up there with anything that Hamlet, Othello or Macbeth have to offer. 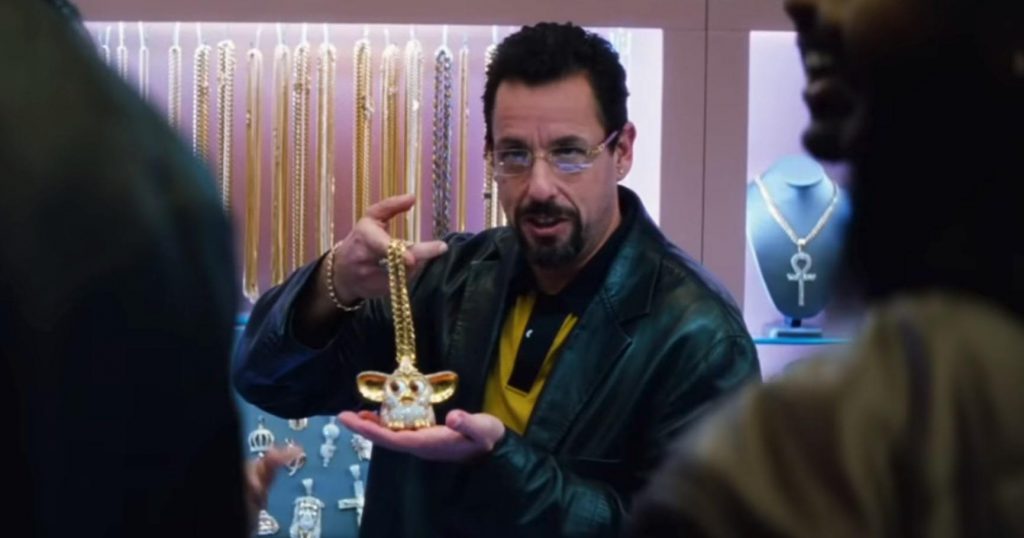 Adam Sandler as Howard Ratner in ‘Uncut Gems’ (Courtesy: A24)

The true tragedy of Howard Ratner’s life, however, isn’t that his greed and ambition bring about his utter ruin, but the way in which every character who is not Howard sees it coming. It’s deeply uncomfortable to watch Howard make another bad decision that lands him right back in the shit just when you think he might possibly be smart enough to walk away. But it is far worse to see how he is the laughingstock of his social circles, too naïve and clueless to understand he’s the butt of a joke both cosmic and social. For a con man with wild aspirations that demand an elevated street savviness and ability to read others, Howard shows a complete lack of discernment. Betrayals Howard is blind to are ones the audience sees coming from a mile away, a thousand fathoms away.

None are worse than the moment Demany, upon failing to return the opal the next morning, gives Howard a vague excuse and brush-off. As the audience, you know Demany has no intention of honoring their agreement. Instead of recognizing this and giving him an ultimatum, Howard allows himself to be given the run-around by a man who all but vibrates with his lack of respect for Howard. Howard moves from a tragic state to a pathetic one when you understand that Demany isn’t even intending to double-cross Howard. It’s simply that Howard is a non-entity to him The most important deal of Howard’s life is an insignificant matter to Demany. It’s exactly the position that Howard holds in the lives and minds of so many around him; believing himself to be at the forefront of their thoughts when in reality, he’s merely an afterthought. In the end, his tale is one told by an idiot, full of sound and fury, signifying nothing.

It’s a mesmerizing performance. I also never want to watch it again. It’s that frustrating, that uncomfortable, that infuriating, that much a pit in the stomach. Watching Howard careen toward a brick wall built of his bad decisions is two tense hours and 15 minutes of undiluted anxiety and fremdschämen. It’s also worthy of an Oscar. For Sandler, it’s about damn time.

Uncut Gems is in theaters on Christmas Day. Get tickets here.