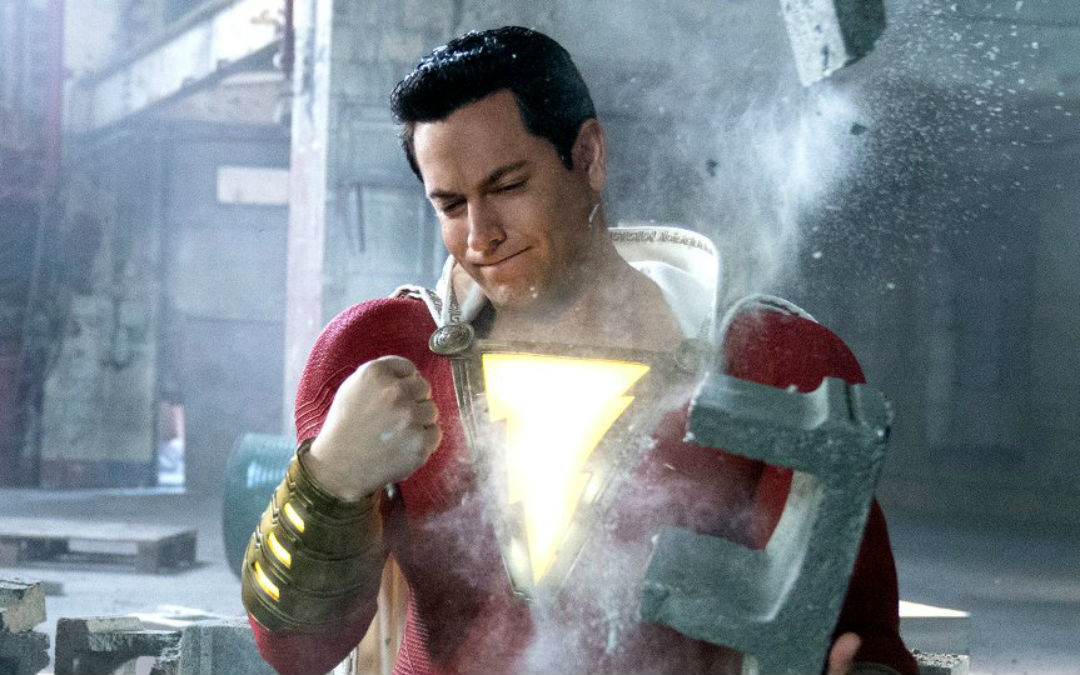 This week, director David F. Sandberg revealed the first look at the Shazam! sequel, Shazam! Fury of the Gods, and it’s more than fair to say the costumes have gotten a serious upgrade from the first movie. Take a look:

As charming as the first movie was, the costumes, which were styled to give a somewhat retro vibe to the movie, did not quite work on screen after decades of modernized costumes. Spandex is an incredibly unforgiving material, and it gives the impression of flattening out actors on-screen, reducing dimension. An actor with bulging muscles can often look doughy in spandex on-screen even if he’s not. Thus, it’s why most superhero costumes these days either have an armored look, dynamic shading, and virtually every superhero who wears a spandex suit wears a foam rubber muscle suit underneath, no matter how ripped they are. Sandberg & co. seem to recognize that, while the intentions of the first movie’s design were noble, it was time to tweak the costumes to bring them more in line with a modern aesthetic. The upgraded costumes have slightly deeper, richer colors, more noticeably textured fabric, and far more detailing. Well-done, DC.

Disney has found its next live-action princess. Deadline broke the news that Rachel Zegler, star of the upcoming West Side Story, has been cast as Snow White in Disney’s live-action remake currently in development. Marc Webb, director of Marvel’s Spider-Man films, has been tapped to direct with Marc Platt on board as producer. The Oscar- and Tony-winning songwriting duo Benj Pasek and Justin Paul (La La Land, The Greatest Showman) are writing new songs for the movie, confirming the report that the live-action remake will broaden the story and add new songs. Despite Zegler not even having been seen yet in her upcoming breakout role of Steven Spielberg’s West Side Story, which is releasing this December, the 20-year-old is already one of the hottest up-and-comers in Hollywood. When she was 17 years old and still in high school, she beat out 30,000 other actresses for the role in Spielberg’s remake and insiders say it was footage of her singing from that movie that pushed Zegler over the edge in the minds of Disney execs for the role of Snow White. Zegler will also soon be seen in Shazam! Fury of the Gods, which she joined a few months ago in an undisclosed role. Production on Snow White is expected to start some time next year.

Next Transformers Movie Officially Titled ‘Transformers: Rise Of The Beasts’

Get excited, ’80s kids: The official title for the next Transformers movie has been revealed and it’s Transformers: Rise of the Beasts. That means, yes, Beast Wars is on the way. The movie, which is being directed by Creed II‘s Steven Caple Jr., will be set between the 2000s-era main franchise from Michael Bay and the 80s-set spinoff Bumblebee. Exact plot details are being kept under wraps, but Paramount nonetheless revealed quite a few exciting tidbits about the film during a virtual production kickoff hosted by the studio. Among those revelations was the confirmation that the Maximals and Predacons from the original Beast Wars toy line will be making their first appearance in the movie, along with the Terrorcons, led by the villain Scurge, who are set to be the villains of the film. Of course, the Autobots will return with Peter Cullen back in his longtime role of voicing Optimus Prime. Along with Optimus, other Autobots confirmed to be appearing in the movie are Bumblebee, Mirage, and Arcee. New Maximals being introduced include Airazor, Rhinox, and Optimus Primal. As for actual humans in the movie, In the Heights star Anthony Ramos is set to star as Noah, a soldier who has returned home to Brooklyn after serving in the military. Judas and the Black Messiah‘s Dominique Fishback is also joining the film as Elena, a researcher and historian at a museum. Transformers: Rise of the Beasts will hit theaters on June 24, 2022.

We’re Getting Another ‘Pet Sematary’ Movie

Here’s a weird one: Deadline broke the news that Jackson White (Mrs. Fletcher) is in final negotiations to play a young version of Jud Crandall in a new Pet Sematary movie from Paramount, set to release on Paramount+. Writer Lindsey Beer, whose star is on the rise, will be penning the newest version of the script as well as making her directorial debut with the project. Jeff Buhler wrote the first draft of the screenplay. Plot details are unknown at this time, but seeing as how White will be playing a younger version of the classic Stephen King character, it’s fair to guess the story will be a prequel that tells the story of how, exactly, Jud Crandall learned that “sometimes, dead is bettah.” In the original book, of course, Jud is the character who shows Louis Creed the burial ground with supernatural properties and later comes to deeply regret ever telling Louis of the legend when Louis uses it to bring his dead son, Gage, back to life with horrific results. Fred Gwynne made the role iconic in the 1989 adaptation while John Lithgow played the character in the most recent adaptation in 2019.

Along with its next princess, Disney also has its next movie based on a ride lined up. Collider broke the news that Marvel star Scarlett Johansson will not only star in a Tower of Terror movie, but she’ll also serve as a producer on the project. Plot details are being kept under wraps, but Inside Out writer and Toy Story 4 director Josh Cooley has reportedly already been brought on board to pen the script, so development is further along than anticipated. Johansson will be producing through her These Pictures banner along with Jonathan Lia. Though there’s no director attached, Disney apparently feels they can swing for the fences in terms of big names thanks to Johansson’s enormous influence from playing Black Widow for 10 years as well as her multiple Oscar nominations. Tower of Terror follows in the footsteps of Disney’s live-action movies based around popular rides. The first and most famous, of course, is the long-running Pirates of the Caribbean franchise, which has two new movies in development with one set to star Margot Robbie. Also in development is a Haunted Mansion movie with Dear White People‘s Justin Simien set to direct. This summer, of course, will see Dwayne Johnson and Emily Blunt starring in Jungle Cruise.

Trailers Of The Week

You know what time it is! Lots of excellent trailers, clips, and first looks this week.

This looks to easily be the best G.I. Joe movie yet.

It looks like the Candyman is getting an updated backstory. Interesting.

Feathered dinos are on the way!

Legends Never Die: An Oral History of ‘The Green Knight’

This might be one of the best Arthurian legend adaptations ever made.