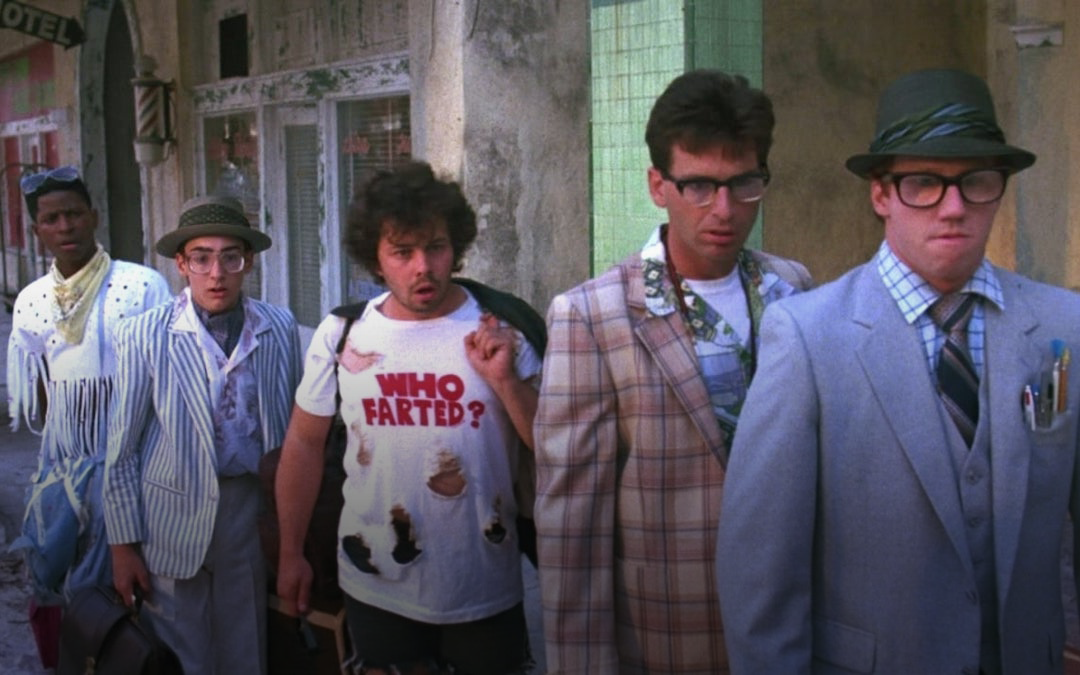 Stay Home & Take A Virtual Spring Break With These Movies

With the coronavirus keeping us all inside our homes for the time being, everyone from college partiers to vacation-desperate parents are woefully canceling millions of spring break travel plans. In fact, lately it feels like all fun has been canceled. But fear not, my fellow vacay-seekers. For what do we do when we need an escape from reality? Watch movies, of course! Transport your pajama-clad self to sandy beaches and sun-drenched pools when you flip on these fun-in-the-sun movies and throw yourself the best damn virtual Spring Break party your living room has ever seen. Spray tan optional.

Jonah Hill and Channing Tatum reprise their roles in the sequel to 21 Jump Street as the world’s most okay-est cops in the undercover Jump Street program. This time the boys are sent to college to uncover the source of a popular yet dangerous new street drug. When word gets out that a big shipment is arriving in Mexico for Spring Break, they suit up in their board shorts and bro gear to seize the stash and catch the dealer. As far as sequels go, this one holds up well for what it is—a funny and unrealistic crime movie. Hill and Tatum play so well off each other as they lean into the increasingly blurred line of police partner and life partner, and their loyalty gets tested once again when Tatum gets a little too into his cover as a college jock. Pour a drink, kick your feet up and zone out.

“Spring break, bitches.” This unexpectedly dark tale follows four college girls (led by Selena Gomez and Vanessa Hudgens) who will stop at nothing, including multiple felonies, to have the best Spring Break of their lives. It deserves to be in here based on title alone, but it’s definitely a Harmony Korine movie. If you hit play expecting a lighthearted getaway movie like I did, you’re going to be in for a visceral shock to the system. The raging party scenes that are standard fare for a party movie are kicked into high gear with lurid drugs, sex and violence and they unapologetically bare no semblance of innocent fun. The seriously disturbing adolescent behavior is punctuated by odd voiceover calls to grandma and James Franco’s creepy AF portrayal of rapper/drug and arms dealer dubbed “Alien.” It’s one of those movies that you can’t stop watching because you want to see where the outrageousness goes next.

3. Revenge of the Nerds II: Nerds in Paradise

Another sequel with a Spring Break setting, this ‘80s comedy takes place back when “nerd” was a dirty word—the ultimate insult. This movie brings the nerds of Lambda Lambda Lambda down to sunny Florida for a fraternity convention. When the Alpha Betas, their suave and recently scorned enemies, find out the nerds are in town and staying at their hotel, the Alphas set off on making the Tri-Lambs’ dream getaway a nightmarish disaster. Of course, the nerds decide they won’t take the bullying lying down. Will the sportscoat-clad, pocket protector-wearing nerds outsmart the cool guys and come out on top? Spoiler alert: yes. Will there be some silly antics to entertain your couch-ridden self along the way? Also, yes.

Ok so, full disclosure, I have not seen this movie, but considering it didn’t really make it past Sundance, I think we can let me slide on this one. The fact that it’s called Spring Breakdown and stars Amy Poehler, Parker Posey and Rachel Dratch alone makes it worthy of this list. Posey gets sent to accompany her boss’ daughter on Spring Break in South Padre, TX. Her two gal pals (Poehler and Dratch) tag along in an attempt to shake up their monotonous lives and play out the college experience they never had. While there, they run into some conflict about fitting in with the cool crowd but the biggest draw comes from the comedic trio’s witty jabs and delusional hijinks as they let loose and attempt to hang with much younger college kids. Add it to your watch list.

5. Where the Boys Are

The original 1960 version of Where the Boys Are basically invented Spring Break as we know it. But I’m going with the 1984 version, which is way different than the original but a little more modern. Four friends head to Fort Lauderdale for Spring Break planning to have the time of their lives. This is an ’80s movie, so of course each one is a bit of a stereotype: the prude (Jennie), the party girl (Carole), the snob (Sandra) and the sex-crazed (Laurie). In between all the laughs and trying to get it on, the girls grapple with love and misunderstandings, life and misadventures. Okay, so maybe it won a Golden Raspberry Award – I’m not saying this is a seriously great movie. But it’s seriously fun, and right now, that’s exactly what we want.

Want more movies recs for while you’re social distancing at home? Check out our list of 5 classic movies to finally watch now that you have the time.