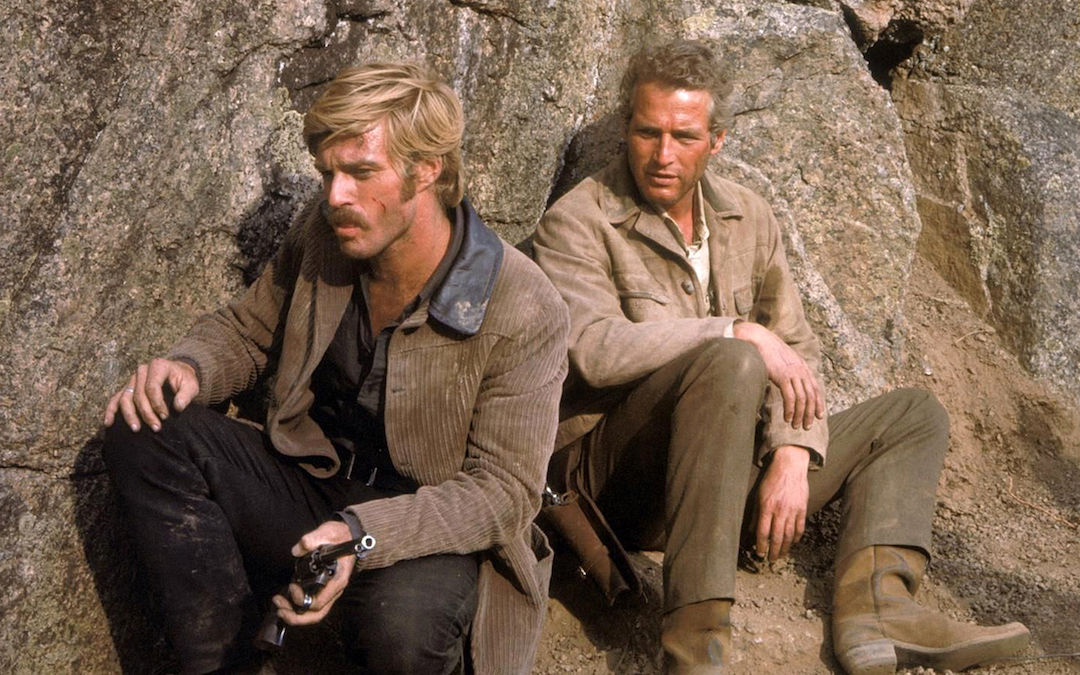 Last week, I wrote about 5 classic movies you can finally watch now that you have time with the new weirdness that is our lives under social distancing. And, you know, finally stop lying about it and pretending you’ve seen them. That list included Citizen Kane, Casablanca, Psycho, The Godfather and Apocalypse Now.

This week, I’m bringing you five more famous flicks that you probably haven’t seen – yet. Now that you have the time, here are the next handful of movies you should get to watching.

I know, I know. You’re sitting on your couch right now, going, “It’s not like I have anything AGAINST musicals, I just don’t like them.” Clever excuse, my musically-disinclined friend, but it’s time to put your tap shoes on. Because I defy you to feel bad when you watch Singin’ in the Rain. You can’t. It’s impossible.

Ironically, the production was incredibly troubled and ran into challenges. For example, the day that Gene Kelly filmed the titular song, spinning his umbrella and splashing through the rain, he was horribly sick with a fever of 103 degrees; the water on his wool suit caused it to shrink and make it harder for him to dance. Most of the problems were due to lead Kelly’s tyrannical temper and perfectionist streak, however. He insisted co-star Donald O’Connor, then a 4-pack a day smoker, do so many takes of “Make ‘Em Laugh” that O’Conner ended up in the hospital for days after shooting it. As for costar Debbie Reynolds, a young actress who was trained in gymastics, not vigorous, complicated dancing, she burst so many blood vessels in her feet while shooting “Good Morning” that she had to be carried to her dressing room. In a famous Hollywood anecdote, legendary dancer Fred Astaire once found her crying under a piano in the studio next door and had to reassure her working with the taskmaster Kelly would all be worth it.

And worth it, it was. Singin’ in the Rain is regarded as perhaps the greatest movie musical ever made, and certainly the greatest musical to come out of the “Freed Unit” run by Arthur Freed at MGM. AFI ranks it #1 on its Greatest Movie Musicals list and #5 on its list of Greatest American Films. In 1989, the U.S. Library of Congress selected it for historical preservation in the National Film Registry. You might not be able to sing in the rain right now, but at least you can live vicariously through it.

Admit it. The minute you read the title of this movie, you went, “Oh, that’s the one with the guy who has the salad dressings and the guy who plays Alexander Pierce in the MCU.” If you did, have a seat on the couch. You put some RESPECT on their names. Robert Redford and Paul Newman weren’t two of the biggest heartthrobs and most respected actors of their generation for you to reduce them to “the salad dressing guy” and “the old Hydra guy.” Butch Cassidy and the Sundance Kid put both together for the first time ever – kind of like Brad Pitt and Leonardo DiCaprio teaming up for Once Upon a Time in Hollywood. It’s no mistake that Pitt has often been compared to Redford throughout his career – Redford basically invented the golden boy with swagger. And Paul Newman was an absolute superstar. A gifted actor who saw fame as a hassle, he became a director, philanthropist, activist and racecar driver. Together, the pair defined the concept of cool for their time.

And Butch Cassidy and the Sundance Kid was the perfect vehicle for them. The crackling, witty script was written by the legendary William Goldman, who, among other gems, wrote The Princess Bride, All the President’s Men, The Stepford Wives and Misery. It allowed the pair to show off their natural charm and the incredible chemistry they had due to being real-life friends. It may have been released in 1969 but the humor is just as sharp and funny today as it was 51 years ago. All that chemistry translated to the finished product, and it earned seven Academy Award nominations, winning four for writing, cinematography, song and score. To this day, it still holds the record for the most BAFTAs at nine. If you want to check out a classic that has held up to the passage of time, make this your first watch.

After the advancements in practical effects and CGI, I get it, older horror movies can feel dated. Silly where they’re supposed to be scary, punchless where they’re supposed to make you jump out of your seat. Why should you bother watching something from all the way back in the ancient times of 1973 when there are plenty of horror movies in this era to scare the bejesus out of you? Because The Exorcist was an absolute gamechanger, that’s why. Don’t believe me? To this day, when adjusted for inflation, it’s still Warner Bros.’s highest-grossing film of all time, as well as one of the highest-grossing R-rated films of all time. It also spawned a wave of horror movies given hefty budgets such as The Omen and The Amityville Horror.

All this box office success stemmed off the wild controversy surrounding it and how irreverent it was for the time. The possession scenes so terrified audiences that paramedics had to be called to screenings; people fainted, vomited and went into hysterics. And the original spider walk was even more terrifying. Unfortunately, back then they didn’t have the technology to remove the wires in post, so it didn’t make it into the movie until a 2000 rerelease. The teaser trailer was banned from multiple theaters, and the movie itself was completely banned in parts of the U.K. Religious zealots were so incensed by the film that child actress Linda Blair had to be protected by bodyguards for six months after the film’s release. Even the cast and crew were so freaked out during filming that director William Friedkin asked technical advisor and Jesuit priest Thomas Bermingham to exorcise the set.

But all that terror and boundary-pushing paid off. It was nominated for 10 Oscars: Best Picture, Best Leading Actress, Best Supporting Actress, Best Supporting Actor, Best Director, Best Writing – Screenplay Based on Material from Another Medium, Best Cinematography, Best Film Editing, Best Art Direction-Set Direction and Best Sound, winning for screenplay and sound. As with others on the list, in 2010 the Library of Congress chose it for historical preservation as part of the National Film Registry. So go ahead and give it a watch. Even for a movie that came out in the tail end of the turmoil and cynicism of the Vietnam War era, The Exorcist is shocking.

Let me guess. This is one of those movies you’ve quoted – probably quite a few times – but have never actually seen. You’ve probably heard the phrase “What is the air-speed velocity of an unladen swallow?” by now. You’ve probably quipped, “‘Tis but a scratch!” or “It’s just a flesh wound!” and yelled “I fart in your general direction!” at someone. You probably definitely know that “strange women lyin’ in ponds distributin’ swords is no basis for a system of government.” And you’ve likely paraphrased another few lines from the movie without even realizing that’s what you were quoting. But you’ve never…actually…seen it, have you? Time to rectify that and get to watching one of the most quotable movies ever made.

The zany, surreal style of the Monty Python comedy troupe has never been in finer form than in Monty Python and the Holy Grail. John Cleese, Terry Gillam, Eric Idle, Graham Chapman, Terry Jones and Michael Palin created something raw and unpolished, but magical. Definitely magical, the ultra-low-budget film powered not by A-list stars or dazzling set-pieces but by the well-honed comedic chemistry and unbridled enthusiasm of the sketch comedy troupe. The theatrical release contained a staggering 527 jokes, but not all of them worked for critics at the time; critical reception upon its initial release was mixed. Yet the reputation of Holy Grail grew over time and today, it’s considered one of the greatest comedies made, spawning countless spoofs and adapted in 2005 as the Broadway musical, Spamalot. So watch it already. And remember to bring a shrubbery.

“I don’t know why I have to watch the whole movie,” you’re saying. “I already know what it’s about.” And, sure. You might. Carrie is one of those movies that has been parodied so many times that when you see the original scene it almost feels derivative, and you’ve almost certainly seen the famous prom scene by now. But imitation is the sincerest form of flattery, and plenty of other horror films and spoofs have tried their best to imitate the famous Stephen King adaptation for a reason.

At the time, filmmaker Brian De Palma was so intrigued by Stephen King’s novel that he lobbied to direct it and became the helmer of the first-ever movie adaptation of one of King’s books. Yes, that Brian De Palma, the same guy who went on to direct Scarface, the Untouchables and kicked off the Mission: Impossible franchise reboot with Tom Cruise. The film was so successful that it went on to cement King’s reputation as America’s hottest new author and sales of the book soared. This was thanks in large part to the dynamic chemistry between Sissy Spacek as the fragile, bullied telekinetic Carrie White and Piper Laurie as her abusive, religious fanatic mother, Margaret. It horrified audiences and influenced at least two famous filmmakers: Quentin Tarantino lists it as one of his favorites and Martin Scorcese revealed he saw it three times when it was in theaters. The Academy took notice, too: Normally not a voting body to give the horror genre credit, both Spacek and Laurie got Oscar nominations for their work in Carrie, Spacek for Best Actress and Laurie for Best Supporting Actor. Maybe it’s time to see what the big deal is about.