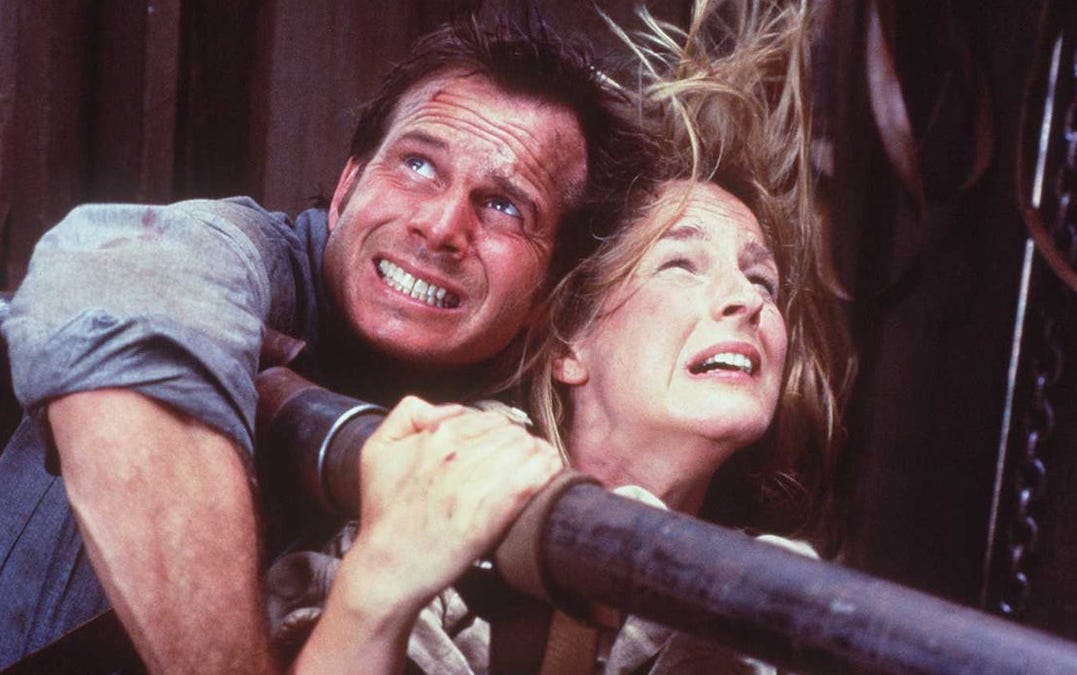 A ‘Twister’ Reboot Is In The Works At Universal

The ’90s were a glorious time. Economic stability, Tamagotchi toys, girl and boy bands, grunge and gangsta rap, Saved By the Bell, and, most importantly, disaster movies.

Much like many things with the ’90s, it appears that disaster flicks are making a comeback. There was the announcement last month that Halle Berry is set to join Roland Emmerich’s Moonfall, a throwback disaster movie for Lionsgate.

Universal is apparently getting in on the natural disaster game, too. Variety reports that a Twister reboot is in the works at the studio with Top Gun: Maverick director Joseph Kosinski in talks to direct. Frank Marshall is on board to produce and Universal is also reportedly meeting with a number of writers to potentially tackle the script.

The original 1996 film starred Helen Hunt and Bill Paxton (R.I.P.) as an eccentric storm chaser couple with a rocky marriage. They build an enhanced weather system but in order to prove it works, they must track down the most dangerous tornadoes and put themselves in harm’s way, including putting themselves in the path of the white whale of tornadoes: a category F5. The excellent ensemble cast also included Cary Elwes, Jami Gertz, and a young Philip Seymour Hoffman. The movie was an enormous hit, making $494 million at the global box office, the equivalent of $876.5 million today.

I was 15 when the original Twister came out and my best friend and I saw it no less than three times in theaters. We were so enthralled we spent a good portion of that summer driving around in his red pickup truck blasting the CD of the movie soundtrack and pretending we were storm chasers. To this day, hearing Goo Goo Dolls’ “Long Way Down” brings up memories of tearing down a two-lane road through cornfields and smelling rain on the wind. To say I am intrigued by this project is an understatement.

Yet, I’m curious to see if it will play the same way that the original did. A major contributing factor to Twister‘s massive success was the groundbreaking special effects it used, as well as the complicated and immersive sound effects (Fun fact: It destroyed a number of surround speakers when it hit theaters). The famed Industrial Light & Magic company worked on the VFX for the movie and created the most advanced and realistic-looking CGI tornado ever put on screen. When the first trailer was released, the first shot of a twister tearing through a barn was pure money and audiences were blown away even before it hit theaters.

For a movie that relied so heavy on special effects to make it, well, special, will audiences in the 2020s feel the same way? We’re used to spectacle by now; CGI and green screen rule the day. It will be interesting to see if Universal plays it completely straight with the film and trusts that a solid action-disaster movie will get people out to theaters, or if it decides to go big and camp with it, à la The Meg. Considering Kosinski’s track record as a director, it’s likely to be the former.

No release date is yet set.