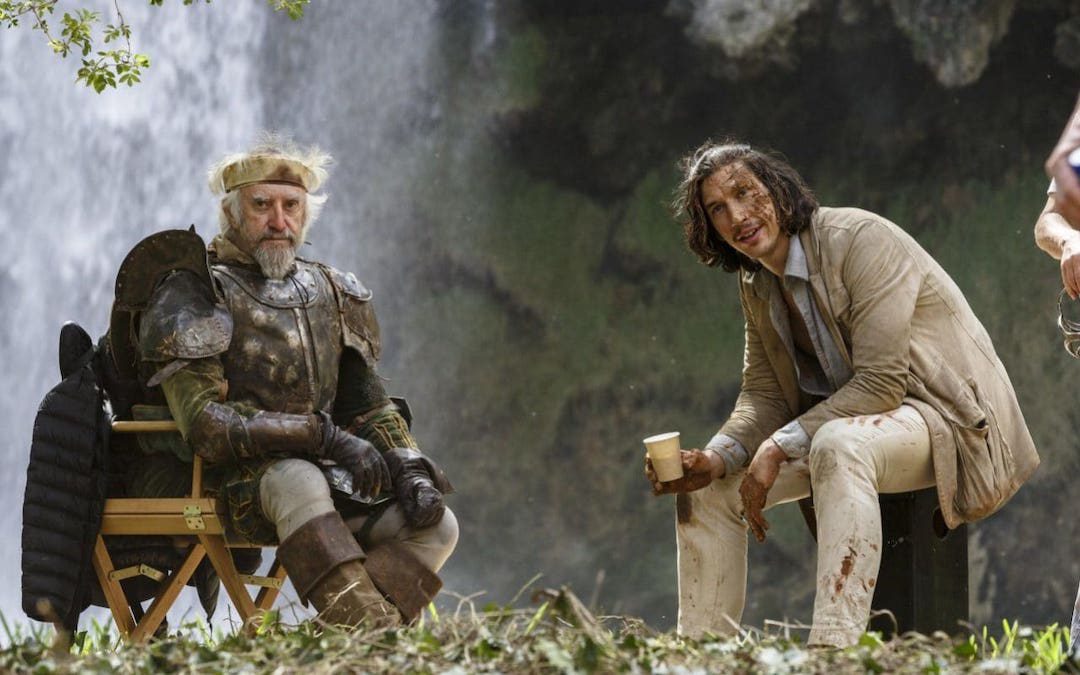 ‘The Man Who Killed Don Quixote’ Review: Three Reasons To See It

Terry Gilliam’s The Man Who Killed Don Quixote is a miracle decades in the making (literally). Through countless scripted iterations (time travel arcs removed), with multiple casts attached (John Cleese, Robin Williams, Johnny Depp, Robert Duvall, Ewan McGregor, etc.), it became a running joke around Hollywood that Gilliam’s white whale production would be eternally cursed. Few believed we’d never bear witness to an unveiling, even up until Cannes played The Man Who Killed Don Quixote closing night to a standing ovation in 2018. Much like his characters, Gilliam’s impossible journey was one of disparity, hardship, and conspicuously lousy luck. “I’m incorporating the idea of the damage that films do to people, so it’s become a bit more autobiographical,” said the filmmaker of the latest, greatest, and finally public version. What sweet vindication 2019’s theatrical release must be.

Adam Driver plays advertising executive Toby Grisoni, who’s mid-crisis on a Spanish commercial shoot featuring portrayals of Don Quixote and Sancho Panza. As chance would reveal, Toby is only a stone’s throw from the village where he shot his black-and-white student film The Man Who Killed Don Quixote. With tensions mounting as “The Boss” (Stellan Skarsgård) keeps a watchful eye on production, Toby thinks it a good idea to revisit his past. Quite the contrary, as you’d expect! Toby encounters Javier (Jonathan Pryce), a local shoemaker who he cast as “Don Quixote” years back, who believes himself to be Don Quixote. “Sancho, you’ve returned to rescue me!” Yes, Toby is mistaken for Sancho and so begins their psycho-hallucinogenic “quest” through the Spanish countryside. Don Quixote the chivalrous, and “Sancho Panza” the very, VERY confused.

Gilliam’s film opened April 10th for one night only as a special event and is slated to release in limited respect April 19th. If you’re lucky enough to have a local screening, here are three reasons why you shouldn’t let this spectacular celebration of cinematic imagination pass you by.

Pryce’s role as a nutjob who believes himself to be a Spanish legend known for fighting a windmill is far more profound commentary than initial perceptions. Yes, his comedic timing as a lost-in-time traveler is a significant selling point for The Man Who Killed Don Quixote. Yet, as with most comedy, tragedy comes hand-in-hand. While Javier struggles to find his place years after Toby’s shooting has wrapped, Pryce embodies the ill-fate of those chewed up and spit out as film productions use, abuse, and leave behind unprepared small towns. Directors promise the world to wide-eyed waitresses, businesses are left empty, and some never recover. Pryce’s layered attributes play the entertainer and sap in tandem, appreciating the duality in both impressions.

Of course, what you’ll remember are his exaggerated theatrics as Don Quixote – riding a horse, dressed in ragged do-it-yourself period costumes, treating Toby as a peasant with full classism and disrespect. From his early arrival as a defender of the weak who dents the hell out of a police car with his prop lance to a later scene where he’s blindfolded, and assumedly flying to the moon as a cruel trick, Pryce sells literary lavishness against grounded realism. Lines are delivered with confidence and no rational thought, as exemplified when referring to grazing sheep as Muslim worshipers. Toby bewildered, attempting to reason, met with joyous laughter by “Don Quixote.” What a performance, from start to finish. Worth the years it took for Pryce’s number to get called.

Mr. Gilliam’s films, appreciate them or not, frequently remind of dreamland states in hazy consciousness. The absurd becomes a reality, while characters attempt to make sense of the incomparable unfolding around them. The Man Who Killed Don Quixote is not different, in such a striking sensory way where our eyes can never be trusted. Just as Toby the videographer manipulates sight lines and sits atop his massive prop giant’s hand – already distorting perceptions – Gilliam programs our minds to fervently question what should and should not be. Take Óscar Jaenada’s character as the most obvious example, who shapeshifts from vagabond to orange picker to Cupid actor – you catch my flow.

Ambition alone doesn’t equate to quality, but luckily for The Man Who Killed Don Quixote, Gilliam’s direction is of the grandest illusions. Truly a filmmaker who keeps you guessing around every turn, as fiery explosions during a breakout lead to roadside knight jousts then jump to a grand medieval gala run by some cosplaying Russian vodka mogul? Few creators can control such Renaissance chaos while letting the maddening effects of insanity project from their characters unto the audience. Chances are you’ll make the same gobsmacked face as Adam Driver at the same time he will – full unplanned synchrony – as a reasonable reaction to the zany escapades of fake Don Quixote and definitely fake Sancho Panza. The better part? A smile will accompany it because Gilliam is firing on cylinders of immense wonder while getting extremely personal and bitingly satirical. All through an unbelievable fantasy adventure’s lens.

3. Adam Driver Just Doing His Best To Hold On

A few options swirled in my head when trying to hammer down #3, but Adam Driver deserves recognition as Toby Grisoni (a nod to Gilliam’s co-writer Tony Grisoni). As “Don Quixote” mocks his sidekick, scoffing at Sancho’s scripted educational dimwittedness or shooing him away from attractive females (i.e. Angelica, played by Joana Ribeiro), Toby’s reactions constantly range from dumbstruck stunned to frustratedly beaten down. Screaming “WTF!” out of the sheer audacity in a multitude of scenarios, Driver’s performance is that of someone gripping onto a speeding vehicle with one hand just barely latched tight. Better yet, his banter and push-backs against Pryce’s whimsical buffoonery throw up a stone wall Pryce continues to vault over.

Once again, there’s more to the performances in The Man Who Killed Don Quixote than just comedic effect. Toby’s evolution from polished businessman to discarded trash to delirious wanderer is about coming to terms with one’s self. Connecting with roots, but also getting lost in the “magic” and “sauce” that’s sometimes toxic (see how he’s manipulated by his boss’ wife, Jacqui, played by Olga Kurylenko). Driver gets tangled in the jumble of Gilliam’s world but is also our guide, both slicing through oddness while embellishing midnight “Spanish Inquisition” raids or discovered golden treasures. Once again, I think timing was on Gilliam’s side when it came to casting. Adam Driver slides right into form as a hot-shot exec whose life finds meaning through the most illogical coincidences. Such is the exquisite irrationality of The Man Who Killed Don Quixote.