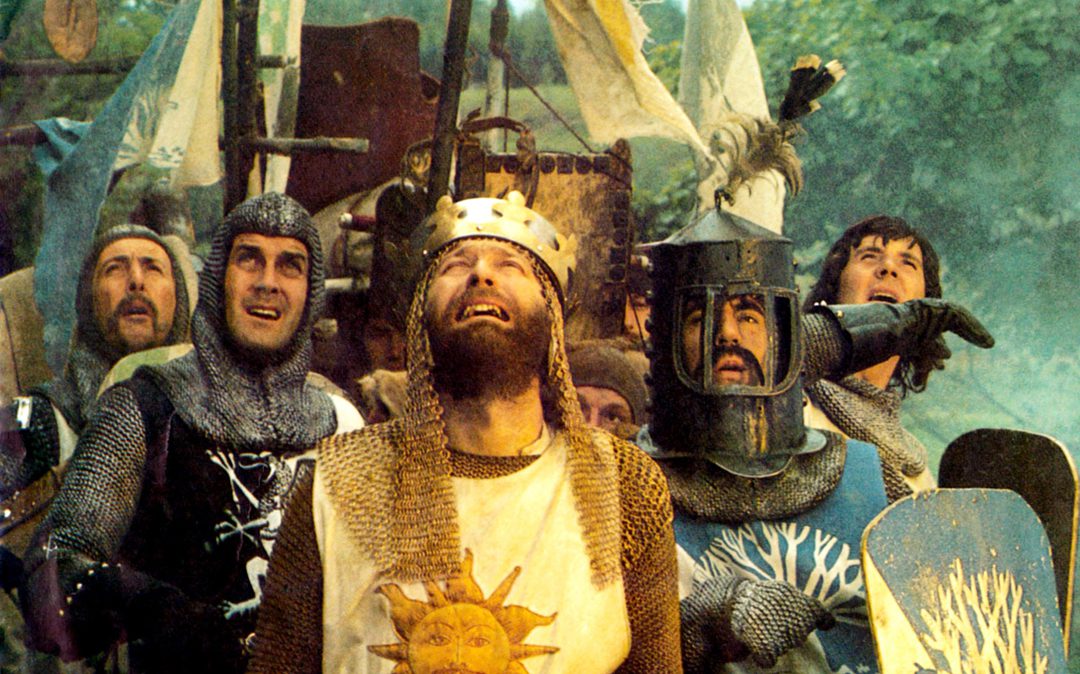 45 years ago this April, the Monty Python comedy group released what would undoubtedly become their most culturally recognizable comedy ever: Monty Python and the Holy Grail. Though it was technically their second film, Holy Grail was the first one to be a single, original story told at feature length, rather than a series of sketches like in their 1971 film And Now for Something Completely Different. And many would consider Holy Grail to be among their finest work (we certainly do).

Personally, I’m more of a Life of Brian kind of fan, but it’s easy to appreciate the ubiquity of Holy Grail as a pop culture landmark since 1975. And with the current box office of 2020 hitting an unexpected pause, we thought it would be fun to pivot our usual box office column toward analyzing the financial legacies of notable films from the past. The reception of classic films, blockbusters, and everything in between can teach us something unique and important about the box office trends of today, especially as we look at periods of film history where major upheaval in the studio system might actually mirror the broad changes of our modern moviegoing.

Strangely enough, we don’t have any official information about the exact box office of Monty Python and the Holy Grail from when it initially released on April 3, 1975. We do know the budget was infamously low: just an estimated $400,000. This is, of course, reflected in some of the film’s best laughs, such as using coconuts onscreen to enact the sound of horses because they couldn’t afford live animals.

But how much value did $400,000 carry 45 years ago? When adjusted for inflation, this amounts to about $1.9 million (thus, roughly 1.5 million GBP). For comparison, that’s close to the production budgets of recent films like The Florida Project and Hardcore Henry. Even the usual horror film from Blumhouse is considered to be “low budget” when made for around $3-5 million. In fact, the only film from 2020 to make anywhere close to this number is The Assistant—a great film, but also a small one in terms of production design.

Though we don’t know how much Holy Grail grossed in theaters before its first re-release, we do know it was enough of a success to fund the Python’s next film: Monty Python’s Life of Brian, which had 10x the budget (thanks in large part to George Harrison). Holy Grail likely grossed $1-2 million in the UK and U.S. alone, but again, this is just a guess based on various interviews and box office context. Of course, this estimate would be well below the highest-grossing films of 1975, which include Jaws ($470.6 million worldwide, $2.2 billion adjusted) and One Flew Over The Cuckoo’s Nest ($108.9 million domestic, $512.8 million adjusted). Don’t even get me started on Rocky Horror Picture Show.

Still, Monty Python and the Holy Grail has proven to be a far more enduring comedy than even most of the filmmakers claim to have expected. This brings us to how the film re-entered the box office decades later. But how?

Home video has been a significant source of revenue and overall discovery of the Monty Python films by new fans all around the world. And Holy Grail is fittingly the “Holy Grail” of this phenomenon. VHS sales in the 80s and 90s helped create a resurgence of interest in the comedy, allowing for a theatrical re-release in 2001, which added $1.9 million to the film’s worldwide box office over the course of 9 months. Adjusted for 2020, that’s about $2.8 million, so around what a typical first-run movie might make in just one weekend after playing for over a month.

Despite having a low box office at one of the heights of its popularity, Holy Grail has clearly lasted as a triumphant comedy because of its “rewatchability” at home, not necessarily as a flash-in-the-pan release in theaters. Between DVD and Blu-Ray sales since 2006, Holy Grail has sold an estimated 3.6 million units. That’s about 1.6 million more units than Top Gun, for comparison.

Rewatching the film, it’s easy to see why. Holy Grail‘s timeless humor, which stretches to the broader catalogue of the Monty Python group, continues to be a source of comfort and laughter among all types of film lovers, from casual couch potatoes to hardcore cinephiles and everyone else in the middle. It may not have been a box office smash, but Monty Python and the Holy Grail proves that the best films eventually find the audience they deserve.