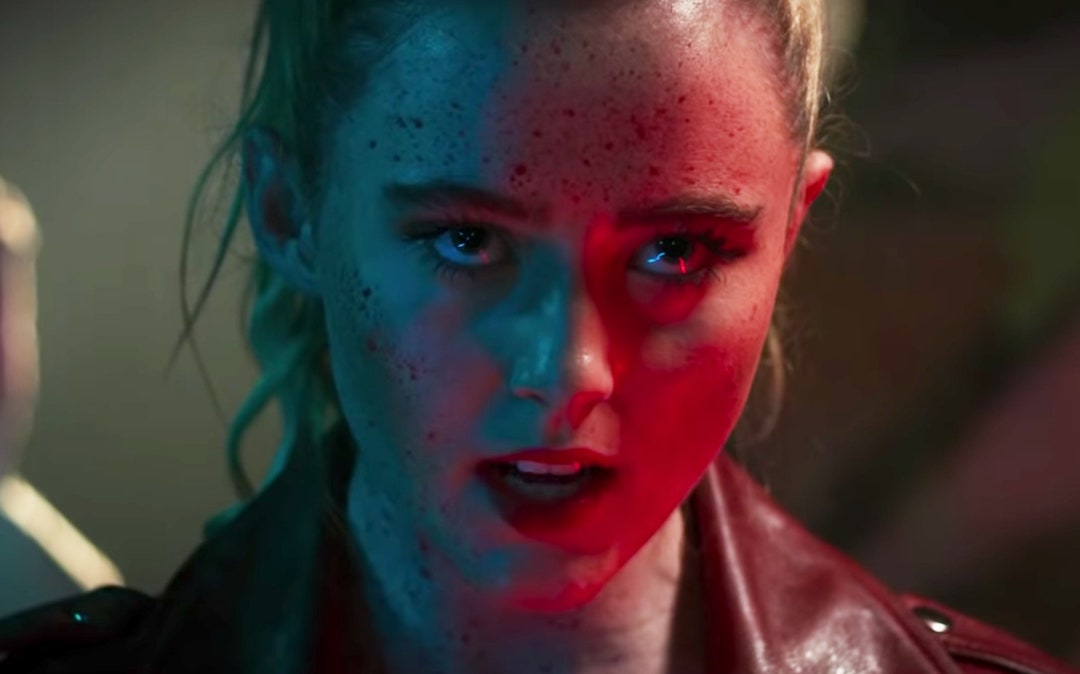 Fare thee well, October. Your spookiness is now but a distant memory remembered only by the stray candy wrapper that fell between the couch cushions and has become an irritating scratch upon my sensitive nether region. But enough about my gross personal life, let’s get to the horror!

As one would expect, the riches bestowed upon us last month are drying up rather significantly but that doesn’t mean the quality has decreased, only the quantity. So rather than feel like you’re being bludgeoned with way too many options, this month we’re going to keep things nice and simple so that you can aim for 1-2 horror movies per week.

So what does November have to offer? There’s British horror, a hilarious yet macabre take on Freaky Friday, a fascinating anthology, toxic masculinity gone body horror, and more. Read on to see which titles tickle your fancy.

Official Synopsis: Follows vulnerable mother-to-be Charlotte (played by Tamara Lawrance) as she is taken in by her recently deceased boyfriend’s mother (Fiona Shaw) and her stepson (Jack Lowden), who seem increasingly obsessed with her every move. Plagued by mysterious hallucinations, Charlotte’s suspicions grow about Margaret and Thomas’ intentions for her unborn child.

Why You Should Check It Out: For those who are seeking something thematically similar to Roman Polanski’s classic horror film Rosemary’s Baby, Kindred may very well be the scratch for your itch. Dropping the whole Satanic cult thing for some good old fashioned gaslighting, Kindred isn’t afraid to venture into the deepest, darkest recesses of family and the importance of lineage versus a woman’s right to her own body.

Get tickets to Kindred.

Subgenre: “Just Put This In My Eyeballs Already”

Official Synopsis: Seventeen-year-old Millie Kessler is just trying to survive the bloodthirsty halls of Blissfield High and the cruelty of the popular crowd. But when she becomes the newest target of The Butcher, her town’s infamous serial killer, her senior year becomes the least of her worries. When The Butcher’s mystical ancient dagger causes him and Millie to wake up in each other’s bodies, Millie learns that she has just 24 hours to get her body back before the switch becomes permanent and she’s trapped in the form of a middle-aged maniac forever. The only problem is she now looks like a towering psychopath who’s the target of a city-wide manhunt while The Butcher looks like her and has brought his appetite for carnage to Homecoming.

Why You Should Check It Out: From Blumhouse and the director of Happy Death Day comes Freaky, a new spin on the whole Freaky Friday foundation. With Vince Vaughn tapping into the comedic roots that powered his rise to fame as well as his more gruesome and serious roles of the past few years, what we have is a horror-comedy that looks like it’s going to give genre fans the best of both worlds. Come for the kills, stay for the laughs!

Get tickets to Freaky.

Subgenre: “When One Movie Isn’t Enough”

Official Synopsis: Brandon prepares to give his last stand-up comedy show. That evening, as his stories and jokes pass, he realizes that these tales have a strong relationship with his past…much more than he imagined.

Why You Should Check It Out: You know what’s better than one movie? How about nine short films and a wraparound story all combined into one complete feature? The great thing about anthologies is that they give genre fans a small taste of everything and Asylum: Twisted Horror and Fantasy Tales is no different. Slashers, clowns, animated skeletons, and so much more are the makeup of this new anthology with shorts from directors like Damien LeVeck, Andrew Desmond, Alejandro Damiani, and more. If you want to see the future of the genre, rent this and see the work of those who are going to dominate horror in the coming years.

Trailer: Not yet released

Subgenre: “Some Relationships Just Aren’t Meant To Be”

Official Synopsis: Looking for her missing ex-boyfriend, Madison and her friends realize that something vile has taken over his body, and is slowly spreading like a disease. What they find will make them wish they had left him to rot.

Why You Should Check It Out: This month’s release from The Horror Collective is a bold, unflinching look at the effects of toxic masculinity and how its impact can affect so many from all different walks of life. As Film School Rejects’ Rob Hunter stated in his review, horror fans “should stick with it for its creepy set-pieces, weighty themes, and a finale that won’t be forgotten anytime soon. It’s a big one.”

We’re proud to release this festival darling and we can’t wait to challenge viewers!

Subgenre: “A Mother’s Love Is Something Alright”

Official Synopsis: They say you can never escape a mother’s love… but for Chloe, that’s not a comfort — it’s a threat. There’s something unnatural, even sinister about the relationship between Chloe (newcomer Kiera Allen) and her mom, Diane (Sarah Paulson). Diane has raised her daughter in total isolation, controlling every move she’s made since birth, and there are secrets that Chloe’s only beginning to grasp. From the visionary writers, producers and director of the breakout film Searching, comes a suspense thriller that shows that when mom gets a little too close, you need to RUN.

Why You Should Check It Out: Originally slated for a theatrical release earlier this year, Run stars horror queen Sarah Paulson, which already makes this a must-see title. But when you factor in that it’s also from the team that brought us the fantastic cyberthriller Searching, well, then you’ve got a recipe for almost guaranteed success. While I don’t suggest running (hah!) to check this one out, a healthy jog is certainly encouraged.

Subgenre: “I Just Want Unhinged Nicolas Cage And I Feel No Shame For That”

Official Synopsis: Every six years, an ancient order of expert Jiu Jitsu fighters faces a vicious race of alien invaders in a battle for Earth. For thousands of years, the fighters that protect Earth have won… until now. When celebrated war hero Jake Barnes (Alain Moussi) is defeated by Brax, the indomitable leader of the invaders, the future of humanity hangs in the balance. Injured and suffering from amnesia, Jake is rescued by Wylie (Nicolas Cage), Keung and his team of fellow Jiu Jitsu fighters. They must help Jake to regain his strength in order to band together and defeat Brax in an epic battle that will once again determine the fate of mankind.

Why You Should Check It Out: Jiu Jitsu isn’t exactly a horror movie but when the logline can basically be condensed into “Mortal Kombat meets Predator,” you best believe it’s going on this list. Coming from the team that made Kickboxer: Retaliation and directed by the guy who produced…1992’s Sleepwalkers? Weird… STILL! This looks ridiculously over-the-top and so entirely absurd that I can’t wait to see what it’s got to offer. Hopefully, there are no bees…

Get tickets to Jiu Jitsu.