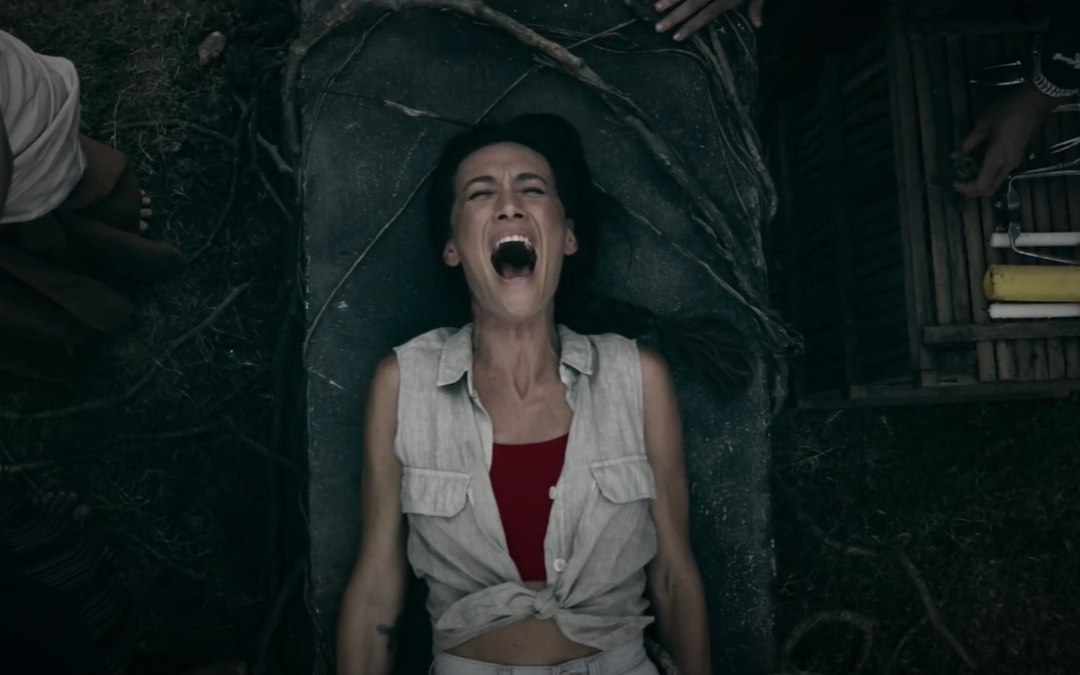 OCTOBER IS HERE! THIS IS NOT A DRILL! HALLOWEEN SEASON IS IN FULL EFFECT!

Okay, let me pull it back a little bit. But can you really blame me? This time of year is 100% my bag. It’s when I really feel like fall is in the air. It’s when I make my annual trip to the local cider mill for a cup of hot cider and a warm donut. It’s when I would normally go to local haunts and enjoy hay rides, corn mazes, haunted houses, and more. From the smell of fire smoke in the air to the crunch of dry leaves under my feet, everything about October is just perfect.

So what’s the best way to improve upon perfection? By loading up on horror movies, of course. That’s why this month will see me tackle 10 upcoming movies that are sure to elicit screams, laughs, disgust, and who knows what else. After all, this list includes werewolves, evil clowns, witches, post-apocalyptic pig-men hybrids, evil morticians, and more. If you’re the kind of person who loves the variety of treats you normally get on Halloween, this list should put a big ol’ jack-o’-lantern smile on your face.

Official Synopsis: When a tourist dies on Halloween night in Salem, the crowd seeks justice by mounting a modern day witch hunt.

Why You Should Check It Out: Just in time for Halloween, The Horror Collective is set to start the witching season off with a few good laughs. After all, with all that’s going on in the world these days, sometimes you just need to crack open a few cold ones and put on something that makes you feel good. Mass Hysteria is a pure delight and clocks in at under 70 minutes, so a double-feature is SUPER easy to plan when you have all that extra time.

Subgenre: “Til Death Do Us Part”

Official Synopsis: Two strangers tell scary stories over the course of a power outage, but this is no ordinary “horror anthology movie.” The more committed Fred and Fanny are to their stories, the more they come to life in the dark of a Catskills cabin… The horrors of reality manifest when Fred confronts his ultimate fear: Fanny is better at storytelling than he is.

Why You Should Check It Out: Dark humor and horror go hand-in-hand like peanut butter and jelly. After all, who hasn’t had a brush – at one point or another – with some gallows humor? If that kind of bleak, morbid hilarity is your kind of speed, then fire up your Shudder account and get ready for Fred and Fanny to do their best to scare each other…and you.

Official Synopsis: It’s 1998 and over the course of one 12 Hour Shift at an Arkansas Hospital, A Junkie Nurse (Angela Bettis), Her Scheming Cousin (Chloe Farnworth) and a group of black market Organ-Trading criminals (Mick Foley, David Arquette, Dusty Warren) start a heist that could lead to all of their demise.

Why You Should Check It Out: The directorial debut of horror mainstay Brea Grant, 12 Hour Shift has been killing it – figuratively, of course – on the festival circuit and now it’s time for wide audiences to see what all the buzz is about. Plus, with a cast that stacked, you’re bound to see someone you love.

Subgenre: “Now THIS Will Be A Home Video To Show The Kids!”

Official Synopsis: Vacationing on an island off the coast of Thailand, Christine (Maggie Q) and Neil Oliver (Luke Hemsworth) awake hungover and with no memory of the previous night. They find footage on Neil’s camera, and watch, horrified, as Neil appears to murder Christine. With twenty-four hours until the next ferry and a typhoon threatening the island, Christine and Neil attempt to reconstruct the night’s events—and are snared in a web of mystery, black magic, and murder.

Why You Should Check It Out: This one hails from noted horror director Darren Lynn Bousman (Saw II-IV, Spiral: From The Book of Saw, Repo! The Genetic Opera), so you know that someone with a ton of horror cred is working behind the lens. Plus, what a fun premise, right? How does one look someone in the eyes when they supposedly murdered you? What are you supposed to do? How are you supposed to act? I guess we’ll find out on October 2nd when Death of Me hits theaters!

Subgenre: “Writer’s Block Can Be A Real Killer”

Official Synopsis: A writer spends the night in a notoriously haunted house in hope of finding inspiration for his latest project. He soon realizes that he is living in his own horror story.

Why You Should Check It Out: If you can’t decide which kind of Halloween ghouls you want to haunt your movie experience, why not opt for a cornucopia of villainous monstrosities? In They Live Inside Us, Jake (played by co-writer James Morris, who also plays the creatures) must deal with a masked killer, a scarecrow, a vampire, and an evil clown. I guess that’s what authors have to deal with in order to write a solid script.

Subgenre: “I Am Woman, Hear Me Roar!”

Official Synopsis: When Lisa, a local outcast, is left to die by a sadistic, small-town sheriff and her underlings, she is bitten by a creature of the night and is bestowed with supernatural abilities. Lisa must then exact revenge on those who have wronged her while doing her best to retain her humanity

Why You Should Check It Out: Horror has long been a platform that lauds and appreciates a badass woman. I Am Lisa looks to give us yet another vicious yet empathetic heroine in the form of Lisa, who is out for revenge for all the right reasons. Sometimes, for a good Halloween movie to work, all you need is a woman ready to pull a Doomguy and do some ripping and tearing.

Subgenre: “…I Got Nothing”

Official Synopsis: In the post-apocalyptic aftermath of World War 3, an army of half-human half-pig super-soldiers takes over the world. It is up to a group of human rebels to destroy them and liberate humankind.

Why You Should Check It Out: This month’s second release from The Horror Collective, Bullets of Justice is as batcrap insane as the trailer makes it look. Gory, violent, obscene, nonsensical, and definitely NC-17 thanks to nudity male and female alike, this is one you put on with a large group so everyone can share in the chaos.

Official Synopsis: When a young girl attends a funeral in an old mortuary, she stumbles upon a secret room full of curiosities where she meets the towering, ominous mortician. He guides her through his collection, sharing four stories of wild, unique, and memorable deaths.

Why You Should Check It Out: I caught this at Fantastic Fest last year and have been dying (no pun intended) to revisit it (in the meantime, you can read Alisha’s review here). The best way to go into this one is to think of it as a collection of Goosebumps stories that were actually written for adults. It’s got all the simplicity and charm of an R.L. Stine story but it doesn’t shy away from being a dark, sometimes vicious movie. Don’t miss this one!

Subgenre: “Where Are The Boondock Saints?”

Official Synopsis: When a young woman overcoming her traumatic past is among several witnesses who see a man fatally assaulted and don’t intervene, they find themselves targeted by someone, or something, out for revenge.

Why You Should Check It Out: Writer/director Jeffrey Reddick is the guy who came up with the Final Destination series, so you know Don’t Look Back will be something wickedly fun. Plus, it stars Jeremy Holm, who played the titular character in the punk rock horror film The Ranger, so it’s already good in my book.

Subgenre: “I Get That Love Defies All Odds But C’mon! Really?!”

Official Synopsis: Set seven years after the ‘Monsterpocalypse,’ Joel Dawson (Dylan O’Brien), along with the rest of humanity, has been living underground ever since giant creatures took control of the land. However, after reconnecting over radio with his high school girlfriend Aimee (Jessica Henwick), who is now 80 miles away at a coastal colony, Joel begins to fall for her again. As Joel realizes that there’s nothing left for him underground, he decides against all logic to venture out to Aimee, despite all the dangerous monsters that stand in his way.

Why You Should Check It Out: The official genre description for Love and Monsters is “post-apocalyptic action romantic comedy”, so you know there’s something for everyone! Mom wants a comedy? Check. Dad likes romance films? That’s a bingo! Little Fluffy – that rascally cat! – wants a post-apocalyptic tale where humans are hunted by monstrous creatures? Take that cat to the pound and never look back.

But in all seriousness, sometimes the best way to enjoy the Halloween season is with the ones we love. While it’s certainly a genre film (meaning some people might shy away from it), Love and Monsters looks adorable, hilarious, and highly engaging. So gather up the family, share the bowl of candy, and appreciate love surviving well beyond the apocalypse.