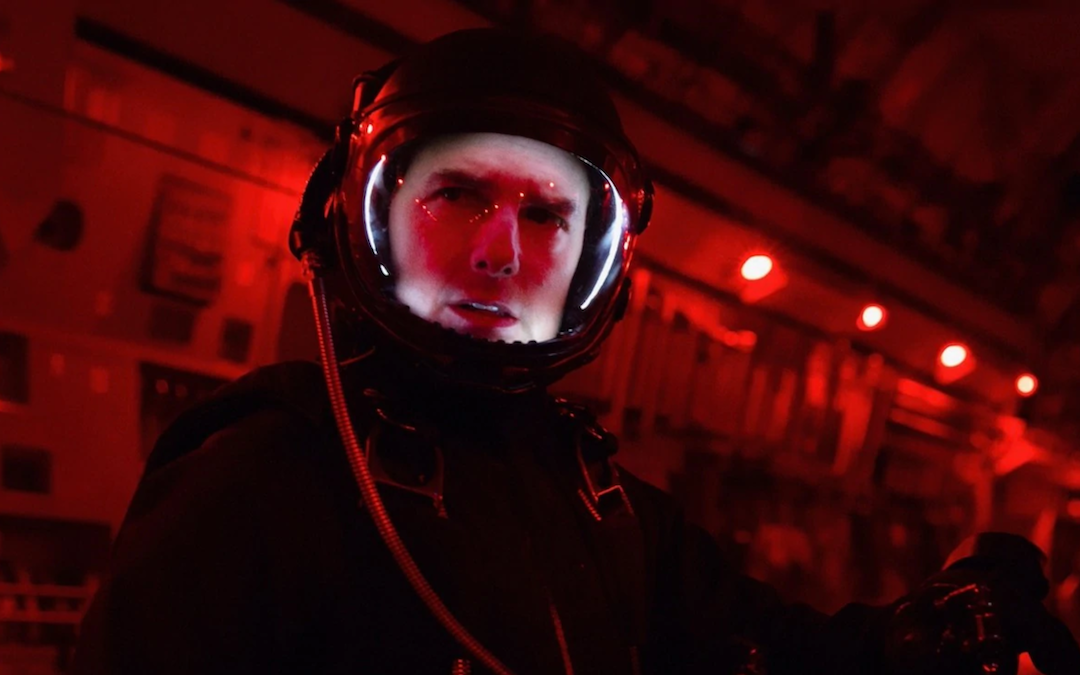 Method actors are, uh, a special breed. While the method school of thought has been losing favor in recent years, some actors still stick to it and hard. One such actor who sticks with it is Succession‘s Jeremy Strong, who is next to appear in Aaron Sorkin’s The Trial of the Chicago 7 for Netflix about the 1968 events of the peaceful protest outside the Democratic National Convention that escalated into a fatal clash with the National Guard and local police. According to Sorkin, the ever-method Strong, who plays civil rights activist Jerry Rubin, insisted on being thrown to the ground by the actor playing a cop in every single take and begged Sorkin to spray him in the face with tear gas, which Sorkin declined. Jeremy, my man. If you want to know what it’s like to be tear-gassed and beaten down, just join a Black Lives Matter protest. You’ll almost certainly get an experience there.

The Tom Cruise Space Movie Is Gonna Be Pricey, Y’all

A few months ago it was announced that Tom Cruise is starring in a new movie partially set in space with Doug Liman set to direct. According to Variety, Universal is in talks to be the studio distributor. Unsurprisingly, for a movie, you know set in outer space, the film will come with a baller budget of upwards of $200 million. For his role as star and producer, Cruise is reportedly set to walk away with anything from $30-60 million. Considering he’s going peak Tom Cruise and training with NASA and SpaceX to prep for being in outer space, it seems fitting he’ll snag RDJ Marvel money for the role. Let’s be honest: “Tom Cruise is finally going to outer space” markets itself.

Taron Egerton, the talented man who has appeared in more than one biopic. He’s now landed his third role based on a real person. The List reports he’s set to play Dutch video game entrepreneur Henk Rogers in Tetris. The movie will tell the story of the legal battle surrounding the game in the 80s and Rogers’ fight to secure the intellectual property rights to the mega-blockbuster game for himself and its creator Alexey Pajitnov. Stan & Ollie‘s Jon S. Baird is set to direct and Leonard Blavatnik and Matthew Vaughn will produce. While a number of other roles have yet to be cast, the report says the project hopes to begin shooting in September in the UK.

Here’s some delightful news in another quarantine week: Ruthie Thompson, a pioneer in the earliest days of Disney Animation’s existence, just turned 110. Yes. A hundred and TEN. The longtime animation supervisor now resides at the Motion Picture & Television Fund’s Country House and Hospital, but she hasn’t let that or her age stop her from being just as spry and active as ever. She’s celebrating her birthday by raising a goal amount of $110,000 to support a postproduction suite in Woodland Hills where she and other retirees often congregate to continue honing their skills and working on their crafts even into advanced age. I want to be Ruthie Thompson when I grow up.

‘Black Adam’ Shoot Likely Pushed Back To Next Year Now

Some “meh” but unsurprising news: It looks like Black Adam, the DCEU movie led by Dwayne Johnson, will get its production start date pushed back to 2021. Naturally, it’s because of the pandemic shutdown forcing the need to juggle everything around. Johnson was supposed to have already shot Red Notice, the Netflix action-thriller with Ryan Reynolds and Gal Gadot. But while THR notes that Red Notice is looking to start production in the very near future in Atlanta, he has to wrap that one up first before shooting Black Adam. With us already being into August and Black Adam only having just cast its second actor in Noah Centineo, it appears unlikely the DC movie will be in a position to start shooting until next year. A bit of a bummer, but that’s just the reality of things right now.

And now, two items to take with EXTREME grains of salt considering the dubious sources…

Normally, I never share rumors, especially when they come from random or fan blog sources, but, hey, I’ll throw ’em out here as notes to just keep in the back of your mind. The first is that Donald Glover is reportedly either in talks with Disney or has already signed for a Lando Calrissian series on Disney+. That news comes from YouTube account Kessel Run Transmissions and is being reported nowhere else, so, again, take it with a grain of salt. Even if true, this has the feel that it’s still very early explorations and could ultimately never come to fruition. So take that for what it’s worth.

RUMOR: Ms. Marvel Might Appear In MCU Before Her Disney+ Series

The second rumor comes from another of those fan sites that are always a little random in nature or tend to report thin speculation as verified fact. So, again, huge helping of salt here. Anyway, the start of production on the Ms. Marvel series for Disney+, which was slated to shoot in August, will be pushed back – no surprises there, as everything is. Disney is already looking around for its Kamala Khan/Ms. Marvel. But Murphy’s Multiverse says that the reason they’re casting right now is that we may see Ms. Marvel pop up in the MCU prior to her series debut. If it does happen, it wouldn’t be the first time Marvel has introduced a character into the MCU before their own solo movies, like Spider-Man or Black Panther. Who knows? We’re just excited to know Kamala Khan is on the way.

The highly-anticipated Mortal Kombat remake has wrapped production and is deep into post, with its scheduled January 15 release date still on track. That post-production process will apparently involve a lot of CGI blood to enhance the practical effects. Star Lewis Tan spoke with ComicBook.com about how gory the movie will get with the video game’s famed fatalities and he confirmed they’ll be extremely R-rated: “Let me just say this: There were some days on set that I felt sick. I’m not kidding! [laughing] They did not hold back,” he said. Wow. I’m not always a fan of over-the-top violence for violence’s sake, but in the case of Mortal Kombat, it’s kind of inevitable. It will be interesting to see what the finished movie looks like.

Denzel Washington and Julia Roberts are inarguably two of our most beloved actors. They made a powerhouse team in 1993 in The Pelican Brief, but, oddly enough, haven’t worked together since. That will change with the upcoming family drama Leave the World Behind for Netflix, based on the upcoming Rumaan Alam novel. The story revolves around two unrelated families who are forced to spend a long weekend together when things go horribly awry. Roberts is set to play the mother of the family who rents the vacation home and Washington plays the homeowner. After 27 years, we bet they still make magic together on the screen.

M. Night Shyamalan’s Next Thriller For Universal Is Building A Stacked Cast

Gael Garcia Bernal is one of those quietly underrated actors who makes everything he’s in better. He’s now set to lend his talents to M. Night Shyamalan’s upcoming, as-yet-untitled thriller for Universal. We don’t know anything about the plot yet – normal for a Shyamalan movie – but we do know that the project is quietly assembling a powerhouse cast. Bernal joins a cast that already includes Eliza Scanlen, Thomasin Mackenzie, Alex Wolff, and Vicky Krieps. Shyamalan, who is, as always, writing and producing the film along with directing it, has found a revitalized career in his partnership with Universal and Blumhouse. Will this be another success like Glass or Split? I certainly hope so. Shyamalan is one of the few writer-directors to keep churning out original films, and for that sake and this stellar cast alone, I’m rooting for this movie to be great.

Zack Snyder’s ‘Justice League’ Is Going To Be Crazy Long

When it was announced that the Snyder Cut of Justice League was coming to HBO Max (albeit only after $20-30 million worth of work), most people assumed it would be longer than the theatrical cut, and anyone who knows Snyder’s work guessed it would be far longer. Indeed, it will be. Snyder previously said his cut would come in at 214 minutes – that’s already over 3 1/2 hours – and in a recent interview with Beyond the Trailer, he revealed it will be even longer. “I have famously teased the runtime at… 214 minutes… Now in its current state, it’s going to end up being longer than that yet,” he confirmed. “So exciting to be bringing all this new material to the fans – they get to see all these crazy and awesome new sequences, and I think that’s going to be really exciting for everyone.” Strap in, everyone. They might have to go the miniseries route, after all.

The ‘Grease’ Prequel Finds A Director

Did you know a Grease prequel is coming? A Grease prequel is coming. Titled Summer Loving, it’s been in the works for a hot minute at Paramount. Now, it’s finally found a director. Recurring Sundance Film Festival regular Brett Haley has been tapped to direct. The story of the prequel will reportedly revolve around the meeting between Danny Zuko, previously played by John Travolta, and Sandy Olsson, previously played by Olivia Newton-John, that was portrayed in the classic 1978 movie musical. That encounter is summed up in the song “Summer Lovin’,” hence the title of the prequel film. The screenplay was written by Leah McKendrick. This will be her first studio film. As for Haley, he was a breakout Sundance indie filmmaker, who most recently directed All the Bright Place for Netflix and is heading its upcoming Sorta Like a Rock Star.

A New ‘Godzilla Vs. Kong’ Plot Synopsis Has Been Revealed

We may not have heard much about it yet, but ‘Godzilla vs. Kong’ is stomping our way and will be in theaters on May 21st of next year. So far, all we know is what the title tells us: It’ll be the giant lizard and the giant ape throwing down. But a new plot synopsis that offers a new detail has been released by Playmates Toys in listings for the toy line tied into the movie: “Legends collide as Godzilla and Kong, the two most powerful forces of nature, clash in a spectacular battle for the ages! The monster war rages on the surface and deep within our world as the spectacular secret realm of the titans known as the Hollow Earth is revealed!” Apparently, there will be an all-out monster brawl deep beneath the surface. Will Godzilla and King Kong remain rivals or will a bigger threat from the center of the Earth force them to team up? We’ll find out next May.