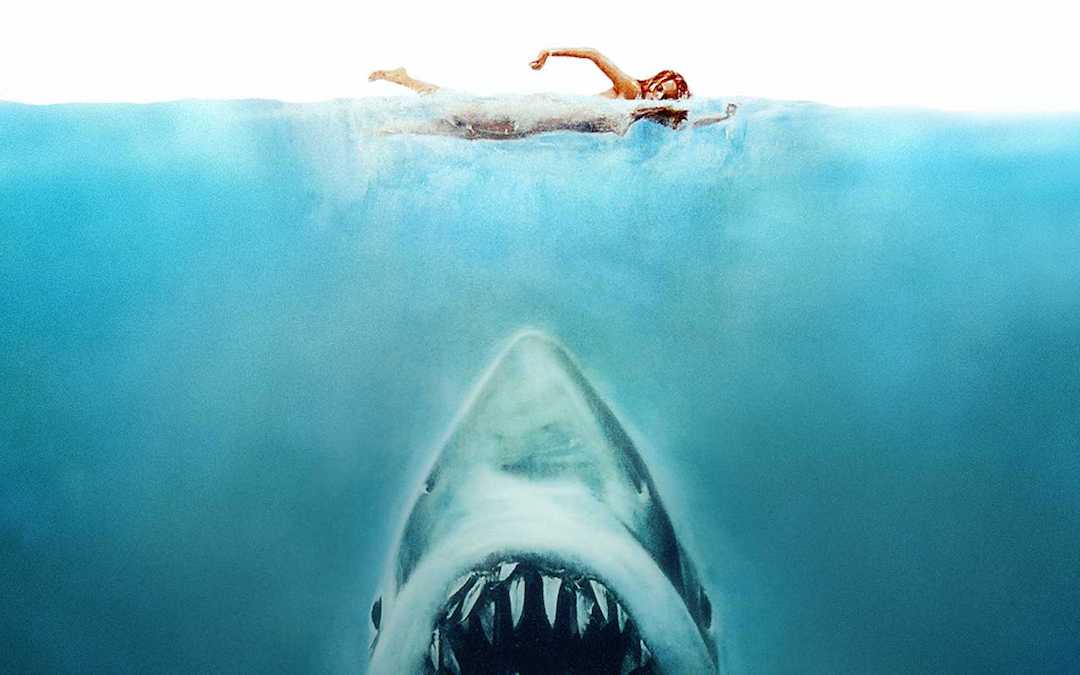 Summer blockbusters. If you’re younger than 45 years old, then you’ve never known a summer without them. If you’re like me, your childhood and teenage years were defined by the glorious three-month stretch of summer vacation with big-budget tentpole movies acting as popcorn-stuffed stepping stones across that free time to the start of another school year. Crowding into a theater with friends to watch Jurassic Park or Jaws or Ghostbusters was both ritual and highlight. Thanks to studios pulling out their repertory and catalogue titles to pad out release schedules while theaters roll out a reopen, we now have the chance to relive that experience of the rise of the summer blockbuster through the 70s and 80s. Just look at some of the titles currently or soon to be in theaters: Jaws (1975), Star Wars: The Empire Strikes Back (1980), Blade Runner (1982), Ghostbusters (1984), The Goonies (1985), and Back to the Future (1985) are just a few of the classic titles you can see on the big screen in coming weeks.

As kids, we didn’t realize how lucky we were to live in a post-summer blockbuster world because it’s what we’d always known. But it wasn’t always like this; the summer blockbuster season, a seeming staple of entertainment, is a relatively new thing. We had no idea that we were growing up while surfing an evolutionary wave in movies.

Winter Used To Be The Go-To Movie Season

For decades, from the explosion of movie theaters in the early 1900s, most people went to the movies during the winter months. The first Nickelodeon theater opened in 1905 in Pittsburgh, PA, but, well, it was 1905. Air conditioning, an invention many of us take for granted now, had only been invented three years prior and it had only been invented specifically to help stop a humidity problem at a particular printing plant. It wasn’t the commercially available system of today.

Now think of the clothing of the early parts of the last century. It wasn’t socially acceptable for women to wear pants until the 1930s when Hollywood icons like Katharine Hepburn started wearing them. Shorts and tank tops were considered taboo until a few more decades after that. Men were still wearing three-piece wool suits in the early 1900s. Even the working class wore long sleeves and coats. The result was that going to a hot, stuffy theater on a summer day while wearing the heavy and restrictive clothing of the time was a rather miserable experience.

That changed on Memorial Day weekend in 1925 when the Rivoli Theater in Times Square became the first commercial building to get air conditioning installed. With the invention of an air conditioning system that was sustainable in theaters (and quiet enough to not be a distraction or drown out the talkies of the late 1920s), suddenly, it was no longer misery to see a movie in the summer. Moviegoers soon started piling into theaters during hot summer months specifically for the air conditioning, a luxury most people wouldn’t have in their homes until the 1950s. Commercial air conditioning paved the way for the explosion of the modern blockbuster half a century later.

The Concept Of A ‘Blockbuster’ Has Changed

The term “blockbuster” is one that’s been around since the 1940s, but it was originally a press term for the military that referred to powerful bombs that could blow up an entire block of buildings. The term was used in relation to a few movies in the 1940s, such as RKO’s Bombardier or the war documentary With the Marines at Tarawa, but it was always used in the comparative context of creating an explosion at the theater like those bombs. The term “blockbuster” as a specific film term unto itself and one completely removed from military connotations simply wasn’t used back then. It didn’t exist in the lexicon. After WWII, even the term as a comparison died out.

It was revived in the 1950s by entertainment press, and its usage shifted to mean something closer to how we use it today, used specifically within film press to talk about certain films that were large in spectacle and budget and that had the potential to make lots of money. Even still, the term “blockbuster” didn’t hold the connotation it had today for the general moviegoing audience simply because the modern concept of the summer tentpole blockbuster film didn’t yet exist.

‘Jaws’ Was The First Blockbuster As We Know Them Today

What we think of as a “blockbuster” today – heavily marketed genre flicks of huge action spectacle, big VFX and stuntwork that tear up the box office in summer months – didn’t coalesce into its modern meaning until the release of Jaws in 1975. It was the film that launched the modern blockbuster era and it influenced how big-budget films were marketed and released thereafter.

Keep in mind that while air conditioning made it bearable to sit in theaters in the summer, it didn’t mean that was the first choice of people to pass the time from May-September. Going to the movies wasn’t a go-to summer activity as it is now. Most people still spent their summer days at the beach or poolside thanks to air conditioning now being a convenience plenty of families had in their homes by that time. People still largely preferred to be outside in the sun rather than in a dark theater on sunny, hot days. Jaws changed all that.

Its success was due to Universal’s unique, never-before-seen approach to marketing the film. Sure, Jaws is a fantastic film that still holds up today. But just as manners maketh man, marketing maketh movie, and Universal pulled out all the stops, spending a then-unheard of $1.8 million to market the film. The massive advertising campaign was a virtual marketing onslaught. First Peter Benchley’s original novel hit the #1 bestseller spot, which helped generate interest. Universal also took the novel approach of flooding prime time TV with ads for the film in the weeks leading up to the movie’s release, as well as putting a blitzkrieg of ads on the radio.

The initial buzz convinced more theaters to program Jaws opening weekend. At the time, most big-budget films operate the way indies do now, opening in a limited number of theaters in big-market cities before slowly rolling out to more theaters. Jaws, however, had a near-unprecedented wide release, opening in 409 theaters across the country and later expanding. By the time it hit those theaters, the buzz around it was so high that it became a true event film. Audiences wrapped around the block to buy tickets and not only that, they returned two and three times to watch Spielberg’s masterpiece.

In its opening weekend, Jaws grossed $7 million, a record at the time. Within its first 10 days, it had hauled in another record $21.1 million, fully recouping its production costs. Within two months, it became the first film to ever cross the $100 million threshold in North America and continued to break records overseas. Hollywood, quite literally, had never seen anything like it. Studios took note, and they rushed to recreate the success of Jaws by rolling out big-budget popcorn flicks to wide release and heavy TV advertising. Two years later, in 1977, Star Wars, directed by Spielberg’s friend, George Lucas, debuted and broke most of Jaws‘ records. The 1-2 combo of Jaws and Star Wars signaled the beginning of the end of the New Hollywood era and the start of the blockbuster era of big-budget, high-concept films, which we are still in today.

There’s certainly been warranted criticism of Hollywood’s increased reliance on blockbusters since then. Studios’ need to recoup the costs of giant production budgets and giant marketing campaigns often means films are written off as flops if they don’t top the box office in their very first weekend, and the reliance on big-budget films has pushed indie films aside; mid-budget films are almost nonexistent. The parity has slowly been shifting back in favor of auteur and filmmaker-driven films in the past few years, but the criticism is still there.

Still, there are few things as exciting or joy-fueled as seeing a really excellent, well-made blockbuster, especially on opening weekend when anticipation and curiosity are at their peak. It’s why I am personally excited to see theaters programming classic catalogue titles rather than new tentpole releases. Of course, I’d love for things to be back to normal and to see the movie industry on its feet and theater business humming along. Things are not fully normal right now, however, and won’t be for a few months. Many people may not feel comfortable going back to theaters just yet. But the silver lining is that this disruption provides us with a unique opportunity we’ll likely never again see in our lifetimes. The next few months give us the chance to experience in theaters movies we may have been too young to see the first time around. It gives us the chance to relive the excitement of the early days of the blockbuster era, when Spielberg and Lucas and Zemeckis dominated our movie screens and helped shape our idea of the perfect summer movie. We may not be getting a new Marvel movie this summer, but the nostalgic spectacle of seeing Jaws and Star Wars on the big screen again is a pretty excellent consolation prize.

Check your local theater for listings and tickets.