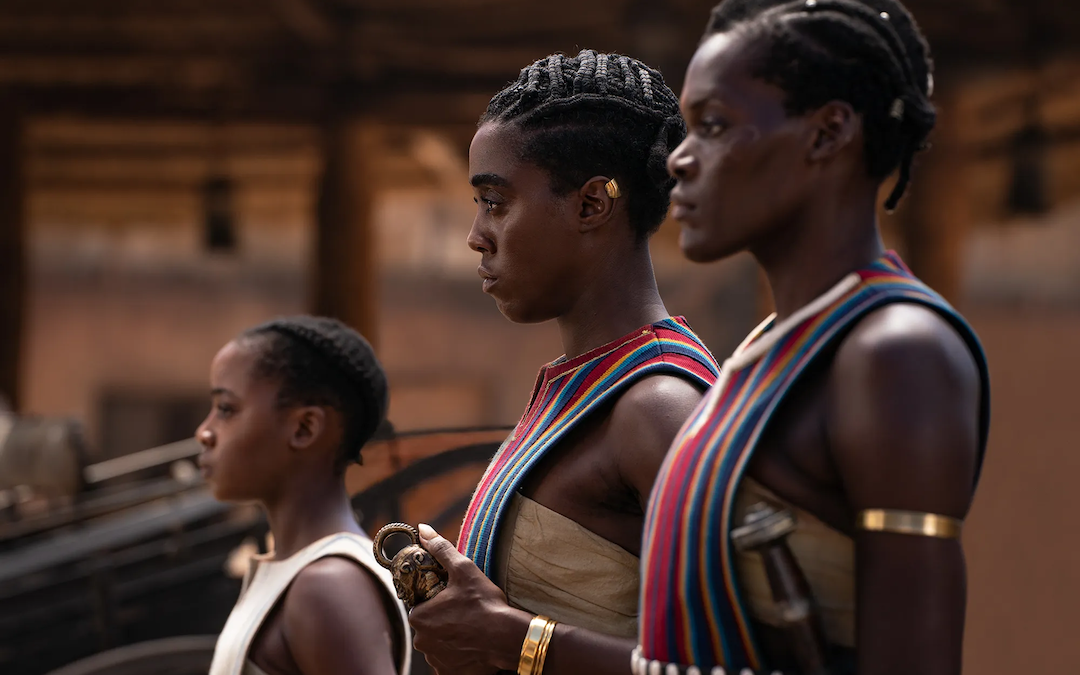 News of the Week: Training For ‘The Woman King’ Was Brutally Intense Says Star

Labor Day has come and gone, school and football have arrived for another year, and the fall movie season is upon us. With it comes big movie news and exciting announcements. This week brings news of a new Nic Cage joint, an exciting first glimpse of a beloved horror reboot, the intense training for an upcoming historical epic, and more.

Kiernan Shipka has been fairly quiet since Netflix pulled the plug on The Chilling Adventures of Sabrina. But now, the young star has her next project lined up and it’s a big one, according to Deadline. She’s set to star opposite Dwayne Johnson and Chris Evans for the holiday action-adventure Red One. There’s another solid name on the other side of the camera, too, as Jumanji‘s Jake Kasdan is in the director’s chair. It’s not certain what the story is about, but it’s being touted as “a globe-trotting, four-quadrant action-adventure comedy imagining a whole new universe to explore within the holiday genre.” A release date hasn’t yet been set, but it’s certainly assembling a solid cast.

The Training For ‘The Woman King’ Was Brutally Intense, Says Lashana Lynch

The upcoming The Woman King looks epic in every sense of the word. Led by Viola Davis, it tells the story of the all-female group of warriors named the Agojie, a force that defended the African kingdom of Dahomey in the 18th and 19th centuries. As the real-life version of Black Panther‘s Dora Milaje, it required the women of the film to get whipped into shape. In an interview with Variety, co-star Lashana Lynch says the training was brutal and harder than she ever imagined–but transformative:

Modern day voices would say, ‘You seem like a superhero,’ with the types of things that were asked of us, but really this has taught me that our bodies can just do this. No matter your age, your shape, your vibe, your weight, you can do this. Because, trust me, most days I came in and I thought, “Oh, no, my shoulder is dislocated, surely, because I’ve never felt this before.” And then our trainer Gabriela Mclain would come in and be like, “Alright, shoulder raises, arms out.” I had something in me somewhere and I was able to access it. The reserves were very deep for this, thank God. And gosh, you’re going to hear a lot during this press tour about the training because it’s quite indescribable. Even when we had days off, there were no days off.”

All that intense training has almost certainly paid off. The Woman King looks incredible. It hits theaters next week, so we won’t have long to wait to see their efforts come to life.

Get tickets to The Woman King.

First Look At The New Pinhead In ‘Hellraiser’ Reboot

The Hellraiser reboot is quietly one of the more anticipated horror projects in the works. Instead of David Bradley playing Pinhead, however, this time, it’s Sense8 actor Jamie Clayton stepping into the iconic role of the Hell Priest. The new iteration of Pinhead is undoubtedly gorier than the original version played by David Bradley. While the pins in the face are the same, Bradley’s version of Pinhead was usually covered head to toe in leather, with a high, priest-like collar covering his throat. This more androgynous version of Pinhead (which is actually closer to Clive Barker’s original story) is gorier. Instead of being covered up, Pinhead’s shoulders and throat are bare, showing the savaged flesh and muscle underneath. It’s a gnarly bit of makeup and prosthetics work, and it should be a lot of fun to see it on screen when it lands in October.

How lucky are we to be living in the Nicolas Cage career Renaissance? Variety broke the news that he and Joel Kinnaman are teaming up for the psychological thriller Sympathy for the Devil, which is currently already underway in Las Vegas. Yuval Adler is helming the project based on a script by Luke Paradise. Its premise is intriguing. Joel Kinnaman plays The Driver, a man who finds himself forced to drive around Cage’s The Passenger, a mysterious man with ulterior motives. The Driver soon finds himself sucked into a dangerous game of cat and mouse in a nightmarish ride. Considering the title, is it possible that Cage is playing the actual Devil? We can only hope, because what an incredible role that would be for Nic Cage. Sympathy for the Devil is currently being shopped to potential buyers at Toronto International Film Festival.

Benedict Cumberbatch Joins ‘The End We Start From’ Cast

One of the more intriguing projects in the works is quietly assembling an all-star cast. Jodie Comer was the first to be signed to the cast, and now, Benedict Cumberbatch and Mark Strong have also joined her, along with Katherine Waterson, Joel Fry, Gina McKee, and Nina Sosanya. Based on the novel by Megan Hunter, The End We Start From follows a young mother and her family, which is torn apart after a climate disaster completely submerges London in an apocalyptic flood. Mahalia Belo is directing from a script adapted by Alice Birch. From the sounds of it, the movie will be extremely relevant to our times. Said Belo

“The End We Start From is a unique and original take on a survival film. One that feels in tune with the climate crisis we are experiencing now. It delivers an honest look at the nature of a hero, someone forced to be brave who sometimes can’t be. It is incredible to be working with such an extraordinary cast, bringing this human, primal, and ultimately hopeful story to life.”

It’s not yet known when The End We Start From will hit theaters, but it appears to quickly be putting the pieces in place for a production start.

Jordan Peele has done it again.

There will never be another Tom Cruise. There just won’t.