In just a few weeks, Birds of Prey (And the Fantabulous Emancipation of One Harley Quinn) will be hitting theaters. The next movie up in the DCEU is currently tracking for a solid $50-55 million opening, though that number will almost certainly jump up if critical reviews and word-of-mouth are good. The movie finds Margot Robbie reprising the antics of Harley Quinn, this time in a post-Suicide Squad world: She’s finally broken up with the Joker and is making her own way in the world. But Harley being Harley, she doesn’t stay out of trouble long. When she runs afoul of crime boss Black Mask (Ewan McGregor), she teams up with Black Canary (Jurnee Smollett-Bell), Huntress (Mary Elizabeth Winstead) and Renee Montoya (Rosie Perez) in order to save a young girl, Cassandra Cain (Ella Jay Basco), from the mobster’s world.

If you’re wondering who these characters outside of Harley Quinn are, no worries, you’re likely not alone as that was by design. In a recent interview with Nerdist, Robbie said that she pushed for Birds of Prey over doing Gotham City Sirens precisely because the characters were lesser-known and she thought it would give them more to play with:

“During Suicide Squad–when we would go to Comic-Con and such–I started to realize there was just such a huge fan base for Harley. Whilst I was researching the character I started to read Birds of Prey and first I fell in love with Huntress, and I started looking into all of that. I was like, ‘Wow, there’s so many cool female DC characters and no one knows anything about any of them!’ So what if we had a platform for fans to get to know and fall in love with some of these other amazing women? Focusing on the Gotham City Sirens, there were only three of us and we were all well known, whereas with Birds of Prey you can pick any grouping for that, and I thought that might be the perfect platform to introduce some female characters who might really have some legs in the DC Universe.”

If you’re not a comic book reader and aren’t familiar with the Birds of Prey movie crew, allow our handy who’s who primer to get you up to speed before the movie hits theaters.

First up, our lady lead… 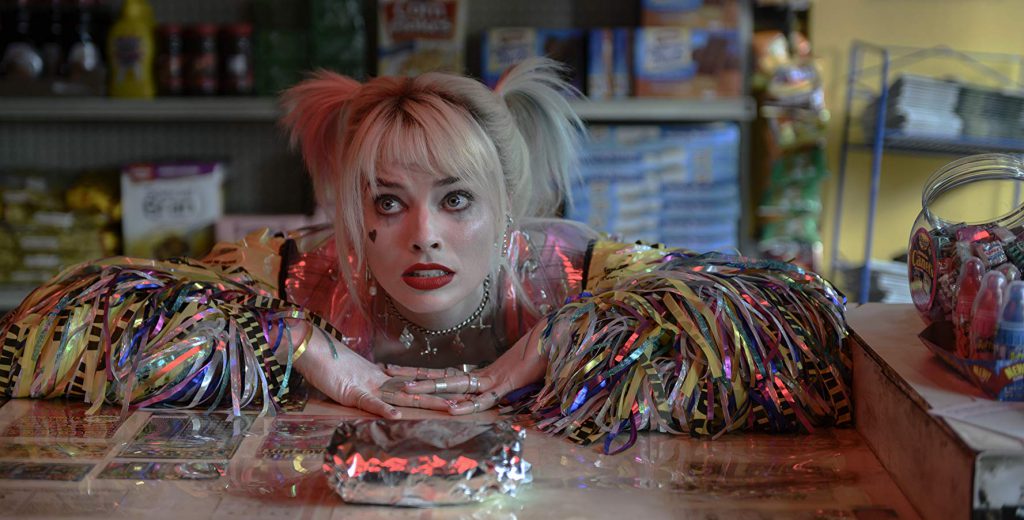 Harley Quinn hasn’t been around as long as other comic book characters, but she’s quickly become one of DC’s most popular characters. Interestingly, her first appearance wasn’t actually in a comic book: Harley was originally created by Paul Dini and Bruce Timm for Batman: The Animated Series in September 1992 and didn’t make her first comic book appearance until a year later in The Batman Adventures #12.

Like most comic book characters, Harley Quinn has a rather sad backstory. Originally known as Dr. Harleen Quinzel, Ph.D., she was a brilliant psychologist with a promising future. However, after a rotation at Arkham Asylum where Joker is one of her regular patients, Joker slowly manipulates Harleen until she falls in love with him, turning to a life of crime as his accomplice and lover. Their relationship was infamously abusive and unhealthy, with Joker gaslighting and emotionally degrading Harley until she was completely submissive to him, always hoping to earn his love. However, the current comic book Harley Quinn has freed herself fully from Joker’s control and is a much healthier and happier version of herself than she was while with him. In recent years, she’s fully come into her own, leaving a life of villainy behind to become an antihero and lead multiple teams.

Originally, Harley had no superpowers, but she was a highly skilled gymnast and athlete all on her own, as well as her masterful ability to manipulate and read people thanks to her psychological background. Thanks to her bestie, Poison Ivy, later injecting her with a toxin antidote, Harley is now immune to toxins and poisons, as well as having gained a certain degree of strength and durability. 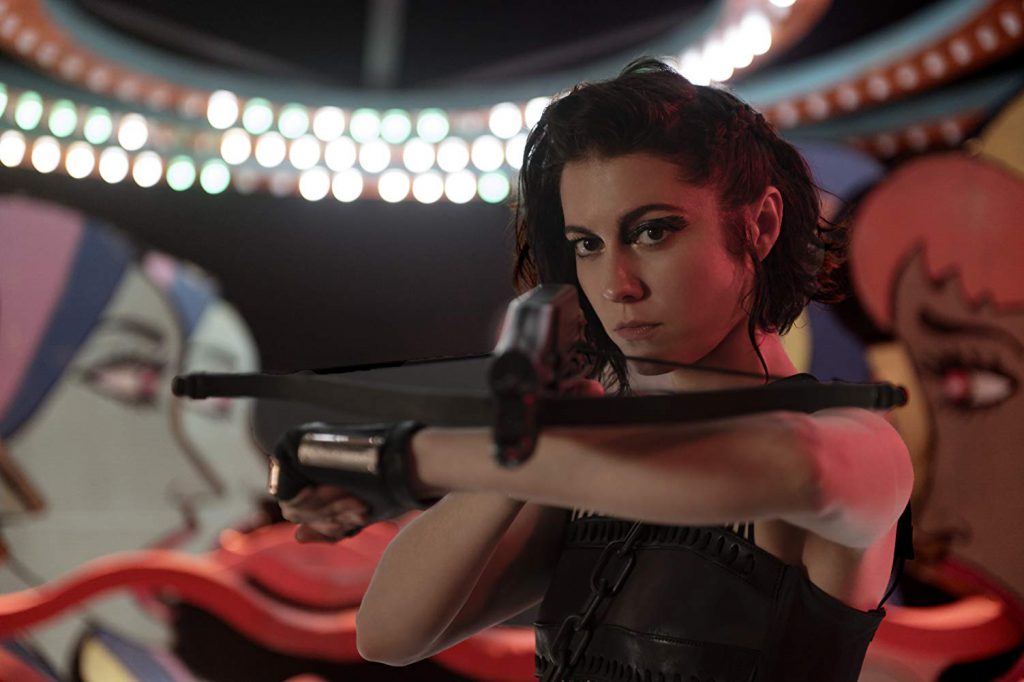 Unlike a number of comic book characters that first appear in other characters’ series before getting their own spinoff series, Huntress was first introduced to the world in her own series straightaway in April 1989. If Harley Quinn had a sad backstory, then Huntress’ is a Greek tragedy in both versions of her origin story.

Helena was born into the Bertinelli crime family, one of Gotham City’s most prominent Mafia clans. In her original series, she was kidnapped as a young girl by a rival Mafia don and raped. In her more modern retconned backstory, she instead witnesses her entire family slaughtered in their home by a rival don. Either way you slice it, those are horrific things for any child to endure. As a result, Huntress is prone to more anger and violence than most heroes; she’s since tried to reform herself and let go of the past, but the anger and heartbreak are always bubbling under the surface. Her morally gray approach to vigilantism and unpredictability often put her at odds with Batman and his strict, carefully curated moral code.

As a vigilante, Huntress is an expert hand-to-hand fighter and has above-average athleticism, but her real proficiency is with weapons, at which she’s a master. Her weapon of choice is a crossbow, but she isn’t above knife-fighting or using her bare hands in close-quarters combat. 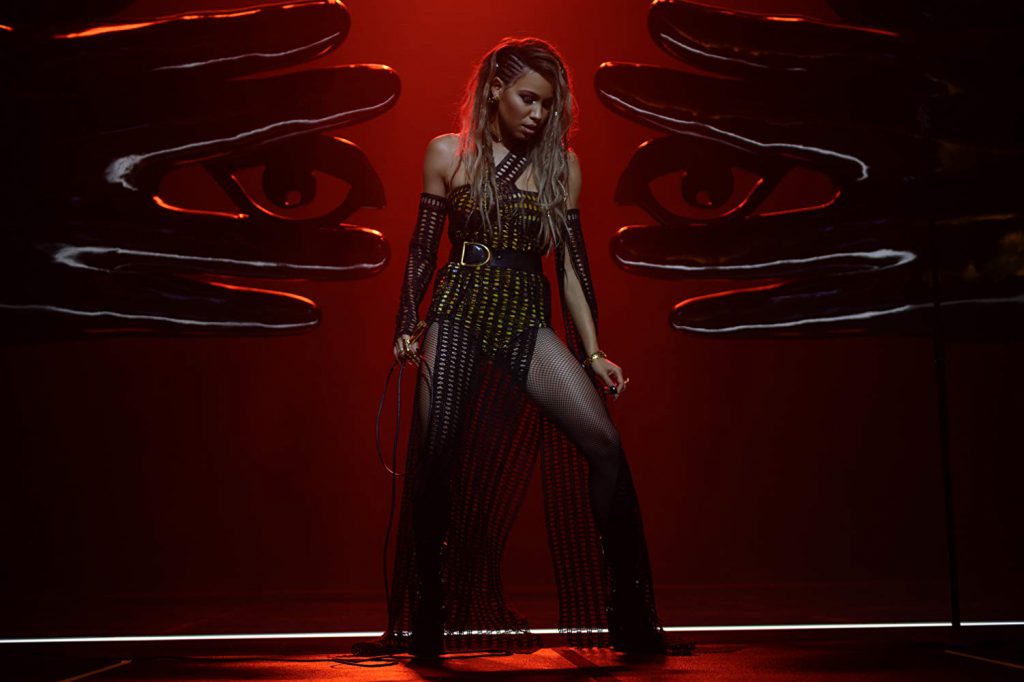 There have been a few iterations of Black Canary, but the movie is going with the most current version of her, Dinah Laurel Lance, who takes over the mantle of Black Canary after her mother, Dinah Drake Lance in the 1986 storyline Crisis on Infinite Earths. The younger Dinah spends her childhood around the since-disbanded Justice Society of America, growing up considering famous superheroes to be her aunts and uncles. When her mother discourages her from following in her footsteps as a superhero, Dinah ignores her and takes up the mantle of Black Canary, anyway, finding other fighters and heroes to help her hone her skills.

Of the characters on this list, Black Canary is arguably the purest hero, having been a member of both the Justice League and Justice League International (and involved in a long relationship with Oliver Queen, a.k.a Green Arrow) before later joining the Birds of Prey. She’s also the only one on this list to have a legitimate superpower, her “canary cry,” a scream that causes ultrasonic vibrations that is more powerful than most sonic weapons, enabling her to do everything from incapacitating opponents to causing mass destruction. Beyond that, she’s a formidable fighter, having mastered various martial arts disciplines. She’s also an expert motorcyclist and competent gymnast, as well as being a skilled investigator and tactician, having led the JLA for some time and being the field commander of the Birds of Prey.

Renee Montoya, a.k.a. The Question 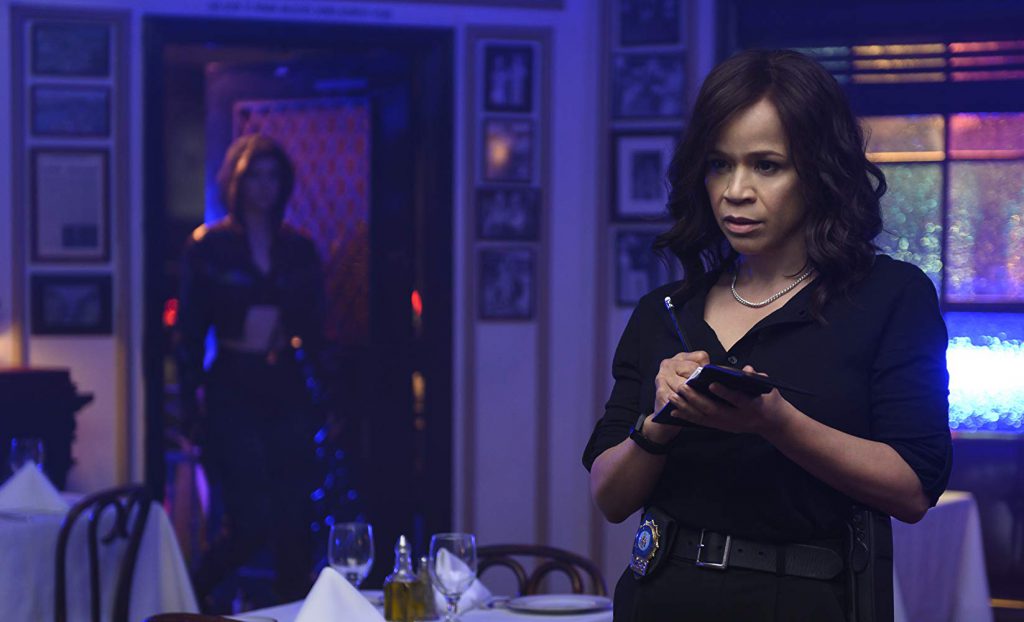 Just like Harley Quinn, Renee Montoya was originally created in 1992 for Batman: The Animated Series. However, unlike Harley, she made her debut in the comics before her episode in the animated series aired. Renee holds a special place in the DC pantheon as being one of the first openly gay characters in comics.

Her character has undergone quite a few changes over the years. In previous iterations, she was outed as a lesbian and leaves the police force. In her origin story retcon in 2015, however, she’s a detective with the Gotham City Police Department and begins as the partner to classic DC police detective Harvey Bullock. As the daughter of immigrants from the Dominican Republic, Renee is committed to upholding law and order, often running afoul of many of Gotham’s most notorious supervillains, not to mention masked vigilante Batman. Her commitment to seeking the truth no matter what puts her in the crosshairs of dangerous people, including corrupt cops in her own force. She also continues to moonlight as vigilante the Question from time to time, taking up the mantle from her mentor, Vic Sage.

As far as powers and abilities go, Renee is quite human. As a police detective, she uses two guns, one her police-issued sidearm and the other being an advanced energy pistol. As the Question, she is gifted Vic Sage’s old costume that is imbued with a number of features including a mask that adheres to her face, completely obscuring her features and the rest of the costume having a chameleon-like color-changing ability.

Perhaps the biggest question mark on this list is Cassandra Cain, but her origin story could slide into Birds of Prey in an interesting way. First appearing as an iteration of Batgirl in July 1999, she has since passed the mantle to someone else, currently going by the name of Orphan in the comics.

Cassandra has an interesting backstory as the daughter of assassins David Cain and Lady Shiva. Her parents, namely her father, trained her to be the world’s greatest assassin, but she was deprived of social contact and never taught how to read or write, a person’s body language being the only language she was allowed to read. As a result, was raised as an expert killer and martial artist, but remained mute and illiterate with extremely limited social skills. When she was eight, her father instructed her to kill a businessman; reading the dying man’s body language, Cassandra was horrified at what she’d done and ran away from her father, becoming an orphan. Over the years she reforms herself, eventually becoming the next Batgirl and first Asian character to take the name. She later passes the Batgirl name to someone else, and, since The New 52 reboot, has taken the name of Orphan as her superhero codename.

It’s unclear if the version in the movie will have this backstory, but if she does, her powers and abilities would be extensive: A master of martial arts and hand-to-hand combat thanks to her uncanny ability to perceive small changes and read her opponent’s body language, she’s wholly human but her cognitive ability to synthesize so much information at once helps her perform at peak human capacity. She also has the uncanny ability to block out pain, making her extremely difficult to take down in a fight. Like all members of the Bat-family, she’s proficient with a number of gadgets and weapons. 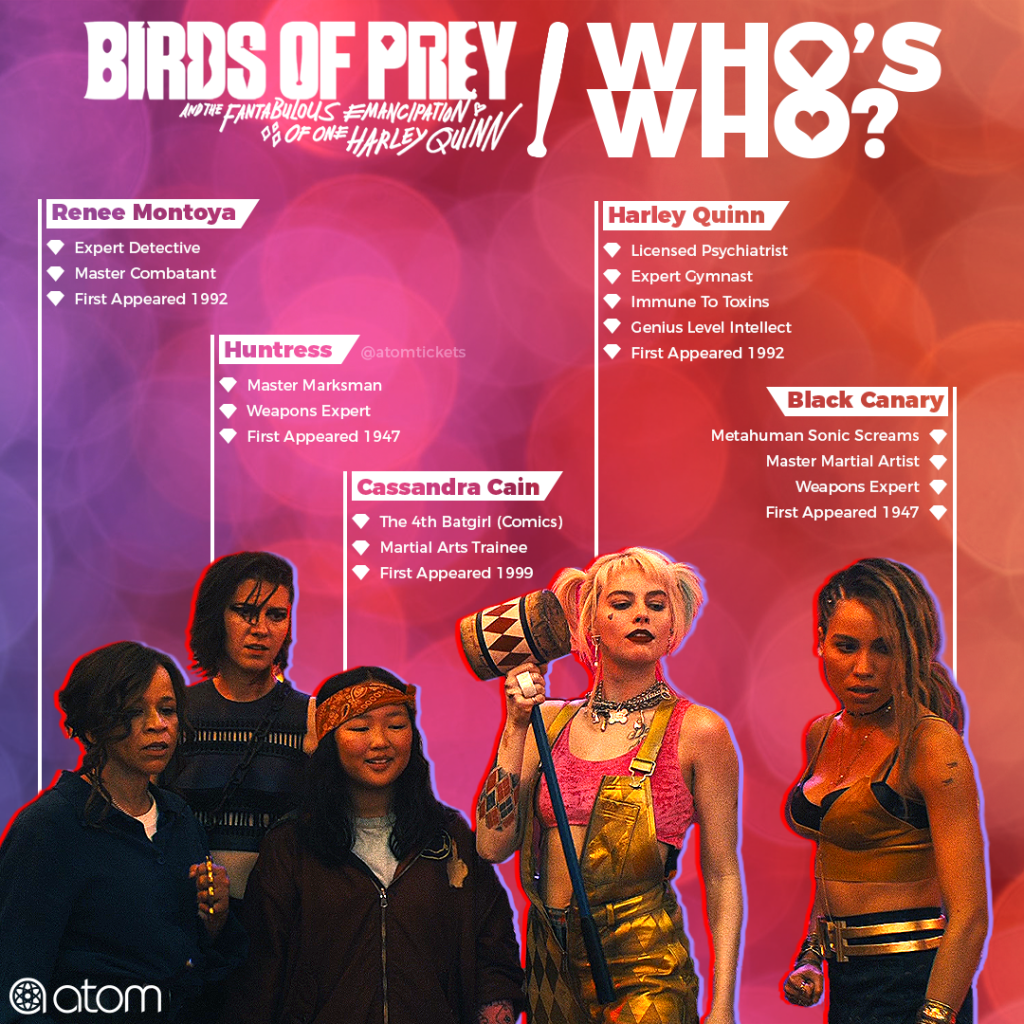 There you have it, the movie version configuration of the Birds of Prey. Individually, they’re incredibly skilled but together, they’re formidable. And they’ll need to be if they’re going to take down sadistic crime lord Black Mask and his henchmen.

Birds of Prey is in theaters on February 7th. Get tickets here. 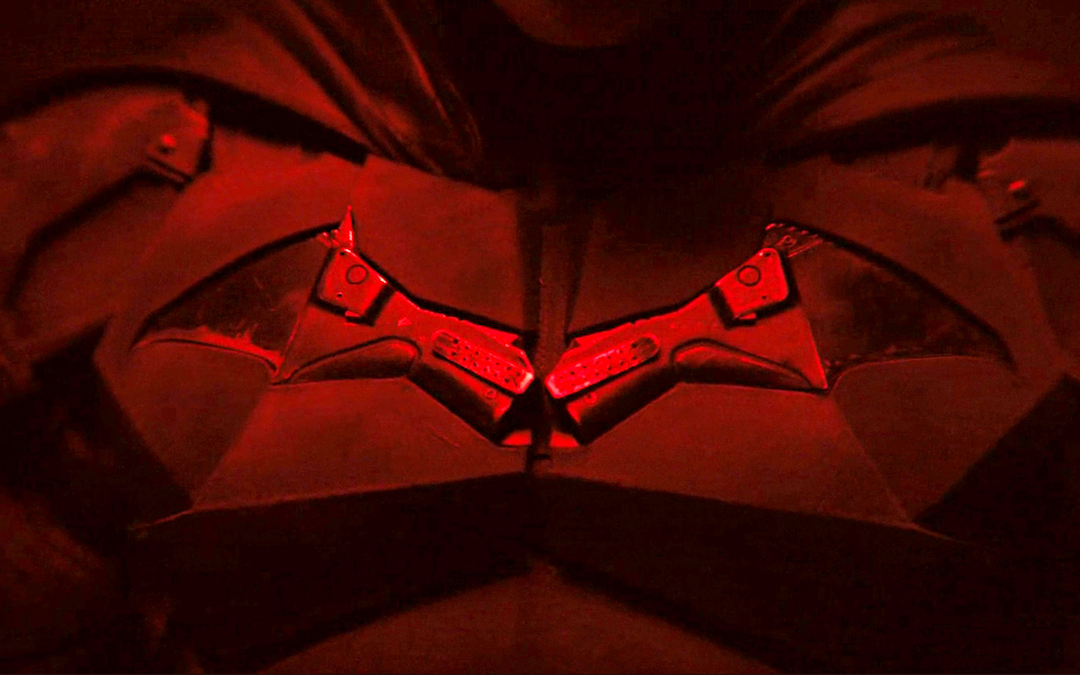 Yesterday, director Matt Reeves made waves when he shared Robert Pattinson’s costume test for The Batman and showed off RPatz in the...