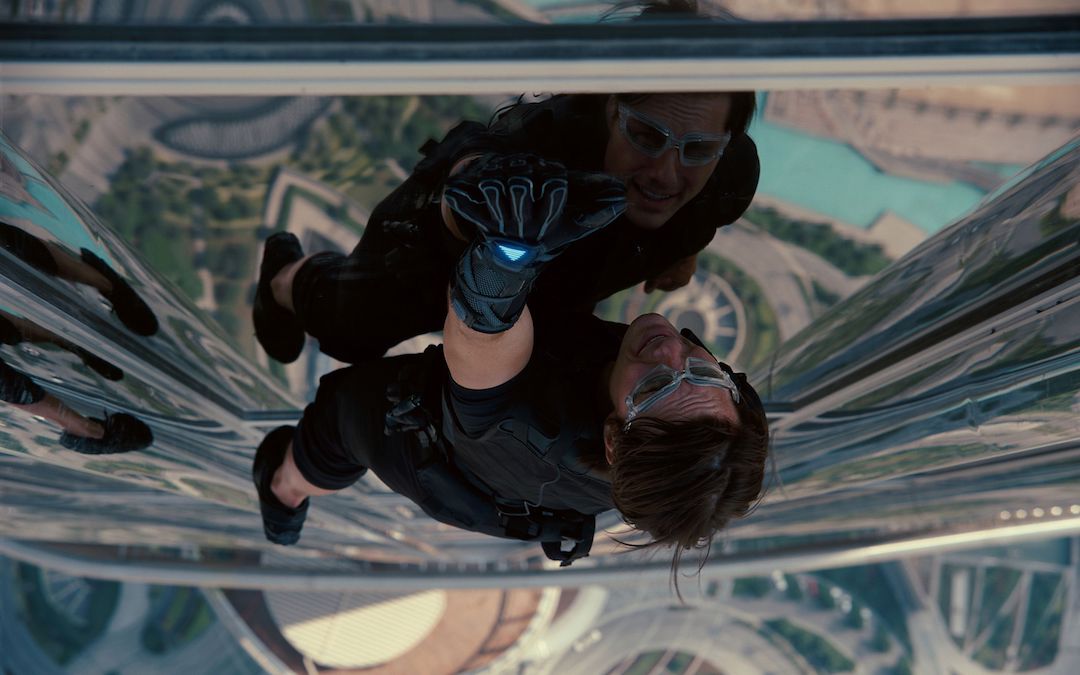 This summer, Tom Cruise will be feeling the need for speed again when Top Gun: Maverick hits theaters on June 26th. The stunt-packed sequel to 1986’s Top Gun sees Cruise reprising his role as Pete “Maverick” Mitchell. This time around, he finds himself training a special detachment of recruits who have already graduated from Top Gun flight school. As you might have guessed, that means the aerial stunts are even more advanced – so much so that Cruise needed special clearance from the U.S. Navy to perform a few particular scenes.

Cruise has a history of being a real-life adrenaline junkie, doing the vast majority of his own stunts over his long career and shaking off injuries and brushes with death like the rest of us shake off a stubbed toe. Even though he’s a few years shy of 60 now, he’s still pushing himself and still going strong, always willing to pull off ever-more eye-popping feats for the sake of an excellent action scene. To remind you of just how much he’s dared over the years, we’re rounding up all the best stunts of his career.

In no particular order, here are all the scenes that have cemented Tom Cruise as arguably the world’s greatest action star.

Let’s start with what is arguably the most famous (and controversial) stunt of Cruise’s career. For Mission: Impossible – Ghost Protocol, the centerpiece action sequence of the film involved Cruise’s Ethan Hunt scaling the outside of the Burj Khalifa in Dubai, which happens to be the tallest building in the world. Naturally, Cruise wanted to do the stunt himself – the only problem was, the insurance company for the movie heard that and went, “Hahaha that’s a great idea, except for the part where NO, ARE YOU INSANE?” and promptly said no. So Cruise fired them and went out and found his own insurance company that would insure him for the stunt. With wires, suction cups, and a whole lot of daring, Cruise pulled off the stunt and cemented himself in Hollywood history. Plus, it made for a pretty sweet picture of him casually perched atop the Burj Khalifa a dizzying 2700 feet off the ground – that’s over half a mile.

2. Almost Getting Decapitated While Filming ‘The Last Samurai’

It’s often we see Tom Cruise running in a movie. In fact, you can likely pick out a Tom Cruise run when you see it: Head up, chest back, hands extended and knifing through the air to his shoulders. It’s rarer you see him on a horse. But in 2003’s The Last Samurai, which was set in the 1870s, ride a horse, he did. He also got some work on an animatronic horse, and it almost killed him. In one scene where he and costar Hiroyuki Sanada are having a sword duel atop horses, the animatronic horse was supposed to stop at a certain point before Sanada took a swing at him. But the animatronic horse malfunctioned and didn’t stop. Sanada’s sword came within an inch of decapitating Cruise – later, Sanada recounted he could hear the crew screaming as he swung. Luckily, Sanada managed to stop his swing just in time, but talk about a close call.

Warmed up? Now begins our Mission: Impossible – Rogue Nation portion of the list…

3. Hanging Onto A Plane Taking Off For ‘Mission: Impossible – Rogue Nation’

This is the one stunt that Cruise himself admitted had him “scared shitless.” For Mission: Impossible – Rogue Nation, his character, Ethan Hunt, has to get into a plane before it takes off, while Benji (played by Simon Pegg) manipulated the controls to open one of the doors to let him inside. The stunt was real and Cruise did all of it. Yes, that’s really a real-life cargo plane taking off and yes, that’s really Cruise hanging onto the side in a pair of dress shoes and yes, that’s really Cruise running up the wing of the plane with nothing more than a few guidelines tethering him, likely questioning all his choices that led him to that moment.

4. Diving Into The Underwater Vault in ‘Mission: Impossible – Rogue Nation’

In one scene in Rogue Nation, in order to infiltrate an underwater vault, Ethan Hunt jumped directly into a funnel of water that sucked him underwater into a circular containment unit. In the movie, Ethan is knocked unconscious and almost drowns, and honestly, real life could have turned out the same, so dangerous was the stunt. In order to prep for the underwater scene, Cruise underwent extensive training and was able to hold his breath for an insane six minutes in order to pull it off. To put that into perspective, professional deep divers who hold their breath can hold it for an average of four to seven minutes. Brain damage can start in less than five minutes. That Cruise was able to not only hold his breath for six minutes but remain conscious long enough to shoot the scene is incredible.

Let’s add one last crazy stunt from Rogue Nation, shall we? Sure, in the grand scheme of things that Cruise has done, riding a motorcycle doesn’t seem all that impressive. But considering the fact that he’s riding a motorcycle flat-out at top speed without a helmet, all while swerving in and out of traffic, getting sideswiped by cars and trucks, being shot at, and even braking on a dime while going full-speed, it quickly becomes one of the more dangerous stunts that Cruise has ever pulled off. What’s more, all the safety features and rider aids that motorcycles come with – you know, the things that help you not to die in a crash – were disabled in order for the bikes to go faster and for Cruise to be more extreme with his leaning and braking. Madness.

The entire helicopter scene in Fallout is impressive, and I’m not even talking about the fact that just to get into the helicopter, Cruise insisted on climbing a rope as it took off and then crawling inside the helicopter while it was in the air. No, what’s even more impressive is that it’s Cruise doing all this own flying in the helicopter chase, which had moments where the rotors from the other helicopter or the walls from the canyons were just a few feet away. To accomplish it, Cruise underwent helicopter flight training and got his pilot certification in just six weeks. Normally, a certification like that takes a full three months to complete but Cruise worked with two different crews for an exhausting 16 hours a day so he could learn to fly it double-time and cut his training time in half. And of course, he did, and of course, he nailed the certification tests.

7. The HALO Jump For ‘Fallout’

It really feels like the Mission: Impossible franchise, which I love with all my heart, is just Tom Cruise jumping from an increasingly higher series of things. Pretty sure by Mission: Impossible 9 he’ll be base jumping from the International Space Station. But the HALO jump that Cruise, a stunt double for Henry Cavill, and a skydiver-turned-cameraman did was, according to director Christopher McQuarrie, the most technically difficult one they ever did. As with the helicopter, Cruise had to get certified to do a HALO jump – that is, a high altitude, low opening jump – and then they had to find a country that would even let them shoot it in the first place. Further complicating the stunt, the sequence in the script takes place at dusk, so they only had a few minutes of available light to shoot every day and they had to shoot three separate parts of the jump. For the jump, which only takes about 2 1/2 minutes in the movie, they shot a whopping 106 takes to get all the pieces together. Take about dedication – and maybe a teeny bit of insanity.

Top Gun: Maverick is in theaters on Friday, June 26. Add it to your watchlist in the Atom app and we’ll let you know as soon as tickets are available.