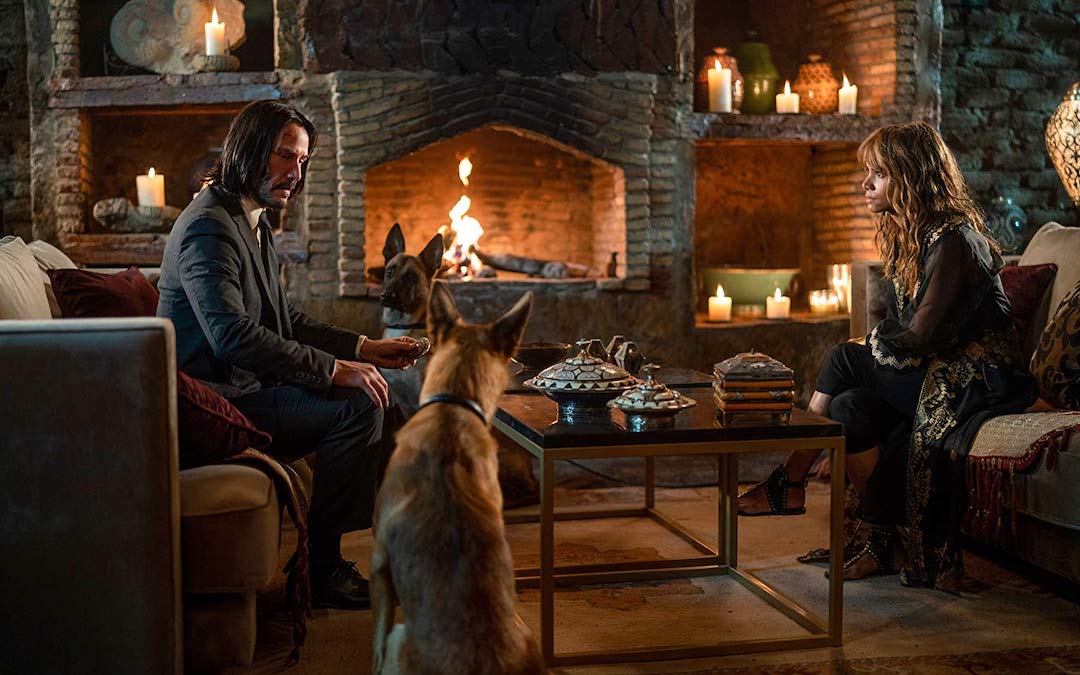 The Devil’s In The Details With ‘John Wick: Chapter 3 – Parabellum’

John Wick, the man, the myth, the legend, the Baba Yaga. Just as this fictional character is feared and respected in his universe, John Wick the film series is respected and revered for its characters, kick-ass fight choreography, stunts and aesthetics. Directed by Chad Stahelski, John Wick: Chapter 3 – Parabellum is the third in the series. Starring Keanu Reeves as the titular character, the movie follows an excommunicated John Wick on the run from assassins and on the hunt for The Elder (Saïd Taghmaouiof) of the High Table to hopefully bargain his way out. As stylish and fast-paced as its predecessors, Parabellum offers a more in-depth look into the underworld of assassins, the inner working of The Continental Hotel and the strings that tie them all together. I’m a sucker for a well shot, well-lit action film, and Parabellum is both of those things. Of course, the music, fight choreography, dialogue and props all serve a purpose. But, just as John Wick himself is known for being a meticulous fighter and assassin, every detail is a deliberate choice, a reflection of him and the world he lives in.

Parabellum picks up right where Chapter 2 ended, with Wick on the run as the clock ticks closer to the commencement of the $14 million bounty placed on his head, and his excommunication, which strips him of all rights to any type of aid and resources by those operating within the system. It is the consequence of him killing Santino D’Antonio (Riccardo Scamarcio) on Continental property.

Before seeking help, John sends his beloved pet dog to the Continental to be looked after by Charon (Lance Reddick), then heads to the New York Public Library to collect tokens that he needs for passage: a rosary, medallion and the gold coins that act as currency in his world. He’s attacked by an assassin, who breaks the rules by going after John before the excommunication officially commences. Wick’s trademark is his ability to use literally anything around him as a weapon. Just as the urban legend of him killing three men with a pencil was proven true in Chapter 2, John uses a book this time to defend himself and kill his attacker. Cheeky of the writers to have the first “weapon” John uses in the movie be a book, since we’re going to get more chapters added to this particular story.

Knowing that his best chance at survival is to find The Elder, the one person who can call off the hit, John returns “home,” to The Director (Angelica Houston), who runs a ballet school in an old theater, to ask for safe passage. Risking the ire of the High Table, The Director acquiesces after John reminds her that he’s owed for the things he did for the family. While walking to her chambers, they pass dancers rehearsing in hallways. As the camera tracks John and The Director, dancers are seen in closeup shots revealing bruises on their skin, exhaustion on their faces. One even pulls out a toenail from her bloody and battered foot without a single twitch of pain.

It all underscores one of the most important messages of the film. As The Director puts it, “life is suffering,” but what really adds to this scene is that the parallel reveals that nothing in this world is as it seems at first glance. From afar all people see are dancers moving gracefully on a stage, but they don’t know, or want to know that it’s just a façade. Like John, these dancers give the impression of having everything together in order to seem stronger, and perfect for those observing. To show even a hint of vulnerability is a sign of weakness that can have them kicked out, or, in John Wick’s case, killed.

While John arrives in Morocco, The Adjudicator (Asia Kate Dillon) arrives in New York to speak with Winston (Ian McShane) at the Continental, Bowery King (Laurence Fishbourne) at his headquarters in the Bowery, and Zero (Mark Dacascos) at his sushi restaurant where she commissions him to take out John. It’s made clear The Adjudicator is not a person to be trifled with. As an emissary of the High Table she makes it clear that no man is above the rules, even as they work and exist below the Table.

Rules are what keep this underworld running smoothly and unnoticed by civilians, and the writers keep that at the forefront of the film. As characters are bound by the rules of the High Table, the writers govern the dialogue with a strictness that, rather than constraining the story, gives a broader context to it and the characters, particularly John. Out of all the characters in the franchise to date, it’s The Adjudicator who is is the living embodiment of this philosophy. Every detail of her reinforces the ideas of rules, rigidity, structure. The clothing is monotone with a military aesthetic, every action and gesture is purposeful, every word carefully enunciated. To them the High Table is the be all and end all, and anyone who steps out of line must be punished appropriately, for service and duty to the organization is paramount.

There’s a duality to the series, a surface level of kitschy aesthetics and quippy dialogue and the brutal world that operates underneath. Everyone, from assassins, Managers and Adjudicators, have to exist in two worlds, both above and below the Table. In the world that functions above the Table, everyone projects a certain level of sophistication and class, surrounded by priceless antiques and attending grand soirees, but the underneath is much more honest and gritty. Fewer politics; everything is pretty simple: kill or be killed.

The set design reflects the above-versus-below theme in its visuals. In the underground administration department, the staff use outdated equipment like analog computers, dial-up phones, abacuses and chalkboards to track every transaction conducted. The Bowery King and his team of messengers who live on the streets is even more analog: Using pigeons and street rats and homeless people to carry and receive information, there’s no denying the effectiveness of his network.

The clothes of the world reflect this duality, as well. Those operating above dress in the finest suits that hide anything that might betray their true identities: dark, sleek clothes, often androgynous, meant to evoke a sense of power while still maintaining the ability to blend in. Meanwhile, the admin staff below wear uniforms that reveal their bold and colorful tattoos and countercultural hair and piercings.

With every hitman in the world literally gunning for him, John is forced to turn to an old acquaintance, Sofia (Halle Berry) for whom John has a Marker – which Winston had given to him at the end of Chapter 2 – for helping her daughter get to safety. As Manager of the Morocco Continental, Sofia is one of the few people who has the power to help and reluctantly agrees to take him to her former boss, Berrada (Jerome Flynn), when John calls in his marker. At Berrada’s compound John is told to follow the constellation Canis Minor to get to The Elder.

It’s symbolic of John Wick’s larger path, and later, Sofia’s. For both of them, their dogs act as surrogates for the loved ones who are no longer with them. The entire story begins by John following the trail of his dead dog; in Chapter 3, Sofia’s story is propelled by a threat to her dogs. All John wants to do is be given the space and time to grieve “unalone,” and for him dogs have given him that solace. It seems that whether they walk beside him or reside in the cosmos, dogs will always be a way for John to find and stay in touch with his humanity.

Once back in New York, John is attacked by Zero and his two Shinobi played by Yayan Ruhian and Cecep Arif Rahaman of The Raid series. In the previous films, there is a certain type of dry humor that occurs with John’s interactions with other assassins, and this time is no different. They were the perfect foil for John because their personalities threw John off-kilter and made the fights more entertaining. John’s look of confused bemusement, rather than his usual stoic expression, is something rarely glimpsed. Rarely is he thrown off his game, and having it happen because three men show open admiration for him is an interesting juxtaposition to every other fight to date in the franchise. John defeating Zero and his men in a glass and chrome room, where traditional Samurai armor is displayed, is just another example of the set design showing the duality of traditional combined with modern aesthetics and principals that can be found throughout the series.

As a series these films are an amazing example of how attention to detail that other franchise would overlook creates a more richly realized fictional world. With each film more layers are peeled back to revealing new revelations and secrets. Whether or not we discover every facet of this world presented depends on how closely we’re willing to look.

John Wick: Chapter 3 – Parabellum is currently in theaters. Get your tickets here.

Space Jam: A New Legacy is about to hit theaters and despite the hype, with it having been 25 years since the first Space Jam was released, some...