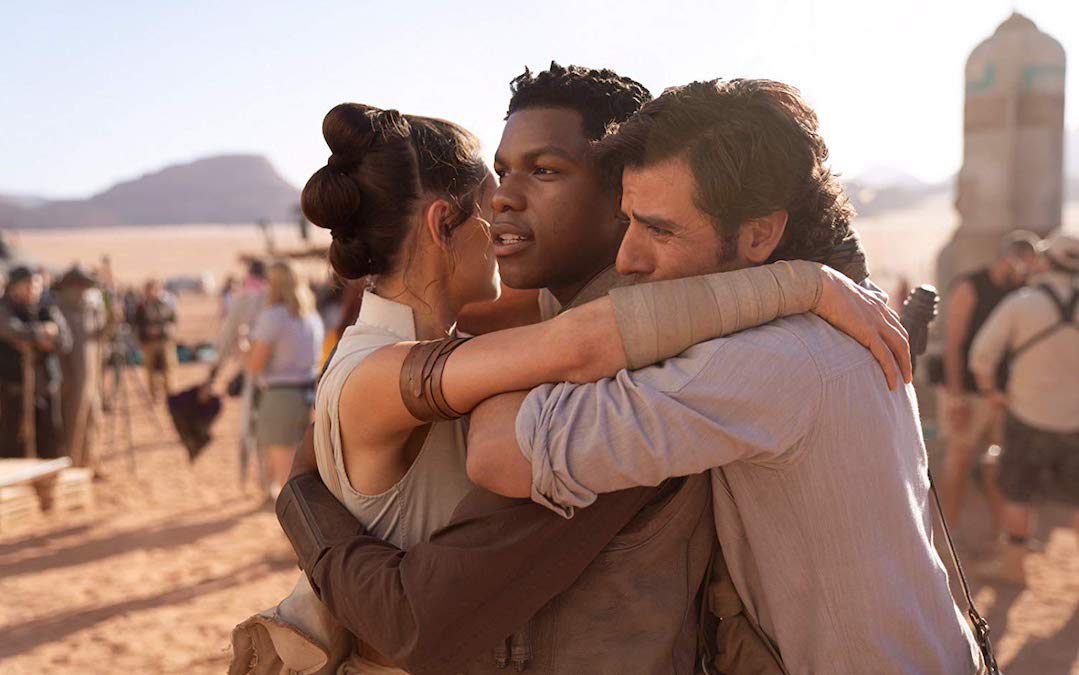 The Best Moments From The ‘Star Wars: The Rise Of Skywalker’ Press Conference

42 years, 9 films, 7.7 billion dollars (soon to be much higher): the Star Wars Skywalker Saga comes to an end on December 20th with the release of Star Wars: The Rise of Skywalker. After Disney acquired Lucasfilm in 2012, the Star Wars franchise has been more prolific than ever. From Star Wars Funko POP figures to Star Wars-branded watches, tee shirts, mobile phone cases, and even a real rolling D-O droid, the space opera has found its way into our hearts in every way. With that amount of pressure, the task of landing the Star Destroyer-sized franchise through its closing act and satisfying millions of fans is no easy feat. 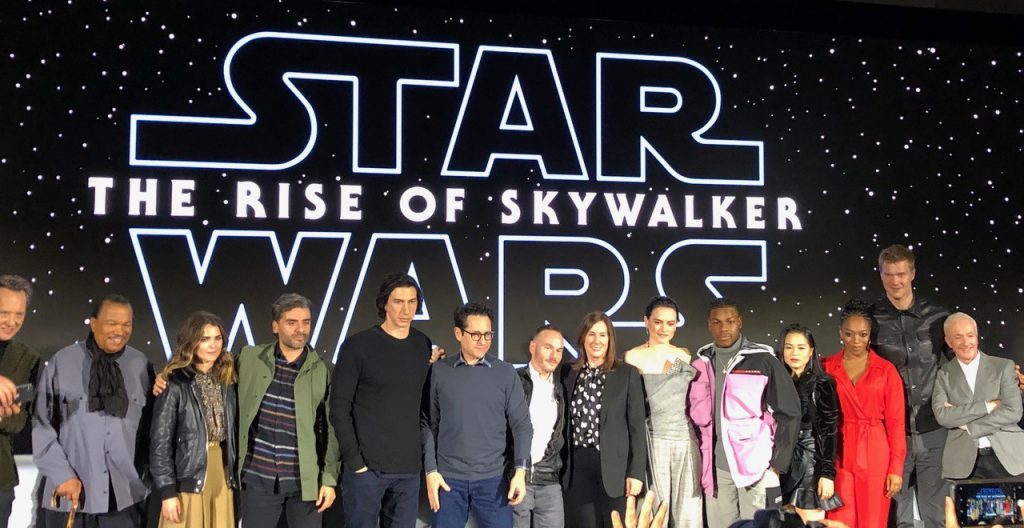 We had the opportunity to join the cast, writers, and director of Star Wars: The Rise of Skywalker in LA for the global press conference earlier this month and learn how they felt about being a part of the beloved series. While there wasn’t much in the way of news or updates about the actual movie itself (Disney is keeping spoilers under lock and key), here are some of the best moments from the press conference.

The Cast Wanted The Film To Honor Carrie Fisher’s Legacy

After Fisher’s untimely passing in 2016, Abrams had to scrap his initial plans and rethink how to honor Carrie Fisher as General Leia Organa. Ultimately, a lightbulb went off and he came up with the idea to repurpose unused footage from The Force Awakens for The Rise of Skywalker to include Leia. From the trailers, it’s sure to be an emotional addition to the film. Knowing what an impactful part of Fisher’s life Star Wars was, the cast wanted to nail the film to honor Carrie Fisher’s legacy.

“Both things were hard!” joked the Rey actor. After a moment’s reflection: “The emotional scenes. With the physical stuff you train and train and then the adrenaline helps you on the day to do the thing, but I was more tired emotionally.” On taking direction from Abrams during filming, Ridley responded, “I know what [JJ Abrams] was asking, I just [sometimes couldn’t] quite get there yet, so [sustaining that emotion] was the most tricky.”

If the two trailers and numerous TV spots are anything to go by, Ridley most certainly got into the emotional headspace and nailed the take for the film. I’m excited to see the dark places Rey’s journey with the Force takes her in TROS. For the more lighthearted scenes, Ridley revealed that filming was so natural she would think to herself, Am I even acting? “It was so easy to flow into it, I was just bouncing off of Joonas, John, Oscar, and Anthony in such a joyous way you just feel like you’re having a chat with your pals.”

Joonas Suotamo Reveals Why Chewie Is So Endearing To Fans

Before answering, the 6′ 11″ Finnish actor let out a loud groan in Shyriiwook, the native language of the Wookies. And, yes, he can actually do it astoundingly well in person. “Why do we love him? For that, we have to go back to 1977 when George Lucas found Peter Mayhew to play [Chewie]. Chewbacca’s endurance has to do with Peter’s unique physicality. He doesn’t move quite like a human.”

Chewbacca adds to the playfulness of Star Wars. He’s a walking teddy bear, what’s not to love?

Oscar Isaac Reveals How Poe Dameron Has Changed Since TLJ

Oscar Isaac wanted to explore Poe’s experiences outside an X-Wing cockpit. “He’s always been a bit of a wild-card energy,” says Isaac, “With this one, J.J. and I talked and [were] excited about kind of dirtying up the squeaky fly boy image that he’s had and revealing a bit more of his personality. And that really comes out because he’s been taken away from his box in space. You get to see the hope and the relentless, almost aggressive optimism he has, and how [it] is tested.”

“His loyalty!” answers Boyega when asked what quality of Finn’s he admires most. “Loyalty is something I find very, very important in my personal life. I think it’s super important to be loyal and to understand the way in which people want to be loved and communicated with. This proactive love is something Finn does on a day-to-day basis.” John likens Finn to that one friend who lovingly calls to check in on you, even when you haven’t answered or responded in a while. While he admits he is quite different from Finn in person, he loves that Finn demonstrates a proactive love. “Finn is Jesus.”

“It’s a real power play,” laughed Russell, “It’s my fantasy dream sequence that I can see everyone, in this super-tough costume, and no one can see me.” Abrams shared that she loved wearing it so much, he didn’t see Russell’s face on set for the entire two days of filming.

You just don’t lose that type of swagger. Billy Dee Williams got emotional on stage and expressed his gratitude for the opportunity to return to the character after 36 years. “[Being a part of The Rise of Skywalker] has been a great pleasure for me. I didn’t think that it would happen. When I got the call from J.J., I just chuckled. What a wonderful gift. I’m a very happy human being right now.”

His last appearance was in 1983’s Return of the Jedi. Donald Glover portrayed a younger version of Lando Calrissian in last year’s Solo: A Star Wars Story.

“Stormpilot” (also known as FinnPoe or Space Boyfriends), as it’s affectionally named, is the ship name the Star Wars fandom has given to the bromance between Finn and Poe – and Isaac and Boyega love it. If you’re wondering why they have so much chemistry on-screen, it’s because the two actors genuinely love each other.

“I just like the guy!” said Boyega. Oscar Isaac laughed and responded that they’ve been close since his audition: “We just got in the dressing room like butt-to-butt and ran the scene together, and from then on we’ve been in that position.” The butt-to-butt scene he’s referencing is, of course, the TIE fighter scene in the opening act of The Force Awakens where Poe and Finn escape from the clutches of the First Order.

J.J. Abrams Reveals What Star Wars Ultimately Means To Him

“We live in a crazy world. We live in a crazy time. Star Wars, for me, was about hope. It was about community, the underdog, and bringing people together and seeing all oddballs represented. The most unlikely friends you meet in the most unlikely places and the family you make, is really your family… The thing that matters most and only in the film is the heart of the characters. It’s about hope and coming back to a sense of possibility and unity.”

During the Q&A, I had the opportunity to ask the cast a question. “What legacy do you want to leave behind after Star Wars?” I asked Daisy Ridley. After a moment of contemplation, she answered: “To be part of something, like a lot of people in cinema are talking about representation and change and aren’t doing it,” Ridley said, “So being a part of a team of people that look a little different, that are from different places, like in whatever form that is — gender, race, whatever it is — I think that, in itself, is a legacy to be proud of.”

She continued, “Like J.J. was saying, this is a film of hope. And I think we are reflective of the world at large. There are a lot of people up against magnificent forces that are fighting the good fight. And, you know, the characters aren’t real, but what they’re doing is perilous in cinema. So to be able to portray even a tiny part of that in this crazy world is very special.”

Star Wars: The Rise of Skywalker opens in theaters this Friday. Get your tickets here.