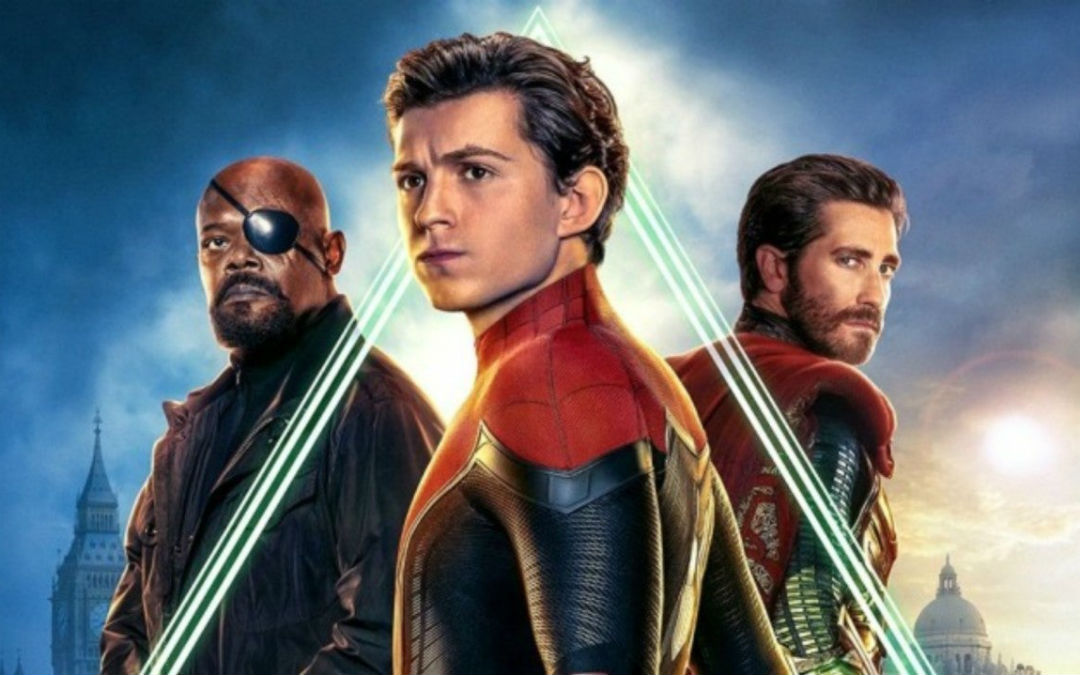 6 ‘Spider-Man: Far From Home’ Easter Eggs You Might Have Missed

Marvel Studios’ movies have become a very expensive (and profitable) delivery system of Easter Eggs for fans at this point. And, judging by Spider-Man: Far From Home‘s box office, audiences love the hunt Spidey’s new sequel puts them on.

Tom Holland’s Peter Parker goes up against Jake Gyllenhaal’s Mysterio in the latest MCU hit, and their conflict is filled with obvious nods and deep cuts to Spidey’s history in Marvel’s movies and comics. Here are a few things you may have missed:

1. Spidey Steals One of Cap’s Moves

In Spider-Man’s final battle with Mysterio, the Webhead borrows a move from Cap that the First Avenger used while fighting Thanos in Avengers: Endgame.

Remember when Steve Rogers used both his shield and Thor’s hammer to battle the Mad Titan during Endgame‘s epic third act? Spidey does a similar move – web-slinging a flying drone in one hand while using a sign as a shield in the other. In fact, if you pay close attention to this beat in Far From Home, Variety says the same music cue from Cap’s moment in Endgame plays over Spidey’s scene.

Yup, that’s Nick Fury – not his Skrull imposter – aboard some sort of craft or base in space overseeing a team of Skrulls and their galactic construction project in Far From Home‘s final end-credits scene.

With S.H.I.E.L.D. no longer what it once was in the MCU, it looks like Fury and his shape-shifting workers are busy making its successor from the comics, S.W.O.R.D. The Sentient World Observation and Response Department seems like the logical next step in Fury and the Avengers’ plan to protect Earth after the cosmic events of the Infinity Saga. If true, here’s hoping the MCU will introduce S.W.O.R.D.’s Special Agent-in-Charge, Abigail Brand.

Mysterio’s use of holographic Elementals are clear nods to some very obscure villains in Spidey’s comics history. Far From Home gives us the MCU’s version of Molten Man, Hydro-Man, and Cyclone. Marvel doesn’t stop there; at one point in the movie, Flash Thompson drops a deep cut reference to Hydro-Man’s alter ego, Morris Bench.

4. Shout Out to Uncle Ben

You’d need a zoom lens or very keen eyes to detect it in the final cut, but Peter’s luggage bears the initials “B.F.P.” Short for Uncle Ben Parker.

The last time we saw Dr. Eric Selvig (Stellan Skarsgård) in action, it was back in 2015’s Avengers: Age of Ultron. So what’s he been up to since?

Well, according to Peter’s in-flight entertainment menu on his plane to Europe, Selvig’s a TV host. As Peter scrolls through viewing options on his flight, he glimpses the cover art for a Nova TV special called “Nova: Einstein-Rosen Bridges” with Selvig on the cover art.

Like Pixar before it, Marvel is hiding some references to its own history on various license plates and ID markers throughout Far From Home. Some of the most prominent ones include:

Spider-Man: Far From Home is in theaters now. Get your tickets below!