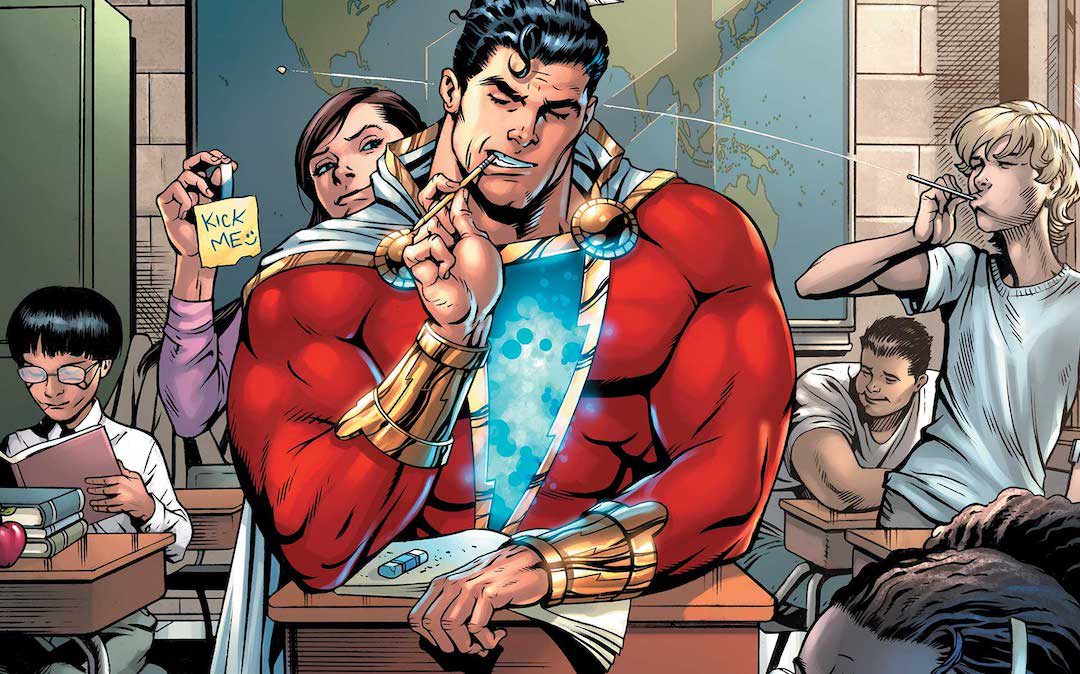 With one magic word, Billy Batson becomes the world’s mightiest mortal. On April 5th, Shazam! hits theaters. Since 1940, the character has been protecting the citizens of Fawcett City and beyond, eventually earning membership into both the Justice Society and Justice League.

It’s a weird coincidence that Shazam! is opening so close to the release of Captain Marvel, the latest film in the juggernaut that is the MCU. When DC’s Shazam first came on the scene, he initially had the moniker now carried with pride by Marvel’s Carol Danvers.

His transition to the name Shazam (the name he shares with the ancient wizard who bestowed him with his powers) was a blessing in disguise. For years, many fans considered Shazam an imitation of Superman, sharing a plethora of the same abilities. With his current incarnation being magic-based, Billy Batson and his alter ego have an easier time finding their voice within the DC Universe.

For those of you that follow the comic books, the upcoming film looks to support the “New 52” origins of the character. “New 52” refers to the 2011 relaunch of DC Comics, where all of their characters received updated origins and costumes (though his movie costume looks to retain some of the elements from the Golden Age, like his OG short white cape). While some of the changes had mixed reactions from fans, one that went over well was Shazam.

Since his inception, Shazam has relied on family to help in his fight against evil. If you’ve read the recent comic and have seen the new series of Funko Pop! figures, you might have an understanding of how the movie will address that concept. However, before there was the “Shazam Family,” there was the “Marvel Family.” Billy Batson was rarely alone in his adventures. Heck, even his arch-nemesis Black Adam gained his own family for a time. Before Shazam! hits theaters, let’s have a history lesson into the original Marvel Family, as well as the Black Adam Family.

The Marvel Family was made up of Billy Batson, his twin sister Mary Baston (Bromfield) and Freddy Freeman. After the death of Billy and Mary’s parents, the twins were separated, with Mary adopted by the wealthy Bromfields, and Billy sent to live with his Uncle Ebenezer. Billy’s arrangement was short-lived, as Ebenezer eventually stole Billy’s trust left by his parents and kicked him out onto the street.

Learning to survive on his own, Billy never lost his kind heart, which is why he was chosen by the wizard Shazam to be the bearer of the powers of Captain Marvel. When Billy speaks the wizard’s name, he channels the forces of Solomon, Hercules, Atlas, Zeus, Achilles, and Mercury (AHA! It’s an acronym!). As Captain Marvel, Billy used his powers to defeat foes such as Doctor Sivana, Mr. Mind, The Monster Society of Evil, and the aforementioned Black Adam. When there were no super-villains around, he would also help citizens figure out what song they were listening – wait. Sorry. Wrong Shazam.

Eventually, Billy reunited with his sister Mary. When a group of kidnappers took Billy before he can say the magic word, Mary was granted a portion of Billy’s powers and became Mary Marvel. In hindsight, that may not have been the best name. “Yes, Commissioner. Bruce Batman here. I’m on my way.” Ah, comics.

Along with his sister, Billy befriended young Freddy Freeman. While on a fishing trip with his grandfather, the two found themselves in the middle of a battle between Captain Marvel and Captain Nazi. I mean, at least there’s no internal conflict there. With a name like Captain Nazi, you know what you’re getting. After receiving a mortal injury, Freddy is taken to the wizard by Marvel, who begs his mentor to save his best friend. Shazam agrees, and when Freddy says the name of his hero, Captain Marvel, he receives another portion of Billy’s powers. Unlike Billy and Mary, who become adults upon transformation, Freddy retains his youthful appearance and takes on the name Captain Marvel, Jr. (it’s as if they knew they were eventually going to lose the Marvel name, so the creators decided to go all-in for as long as they could).

The trio was inseparable for years, with the occasional fight or two. They’re family. Families fight. It’s natural. With the New 52, this history of the Marvel family was put to the wayside, as the “Shazam” family replaced it. Billy is now Shazam, Mary is Lady Shazam, and Freddy is Shazam, Jr. The good news is that anyone trying to figure out their secret identities no longer has Mary’s name as an obvious neon sign. No matter what their family name is or how they found each other in the modern day, their sense of family is something that has not, and will not, be lost.

Teth-Adam was a prince of Kandaq around 1200 B.C. He was the first person granted the powers of the gods when he uttered the name Shazam. Becoming the hero Black Adam, he fought for hundreds of years in the name of good (because superhero lifespan). However, absolute power corrupts absolutely, and Black Adam returned to Kandaq and overthrew the government, becoming its dictatorial ruler. Adam’s corrupt ways didn’t sit well with the wizard Shazam, who then trapped Teth-Adam’s soul in an Egyptian scarab, leaving the world without a champion for years.

Years later, archeologist Theo Adam found the scarab and used the power to become the vessel for the resurrected Black Adam. For years he fought the wizard’s current champion, Billy Batson (Captain Marvel), until he attempted to redeem himself, even joining the Justice Society for a time.

Eventually, Black Adam’s old ways started to creep back in, and he once again became the ruler of Kandaq. This time, however, his alternative means of justice were for his people and not for his gain. See, a refugee, Adrianna Tomaz, had stolen Adam’s heart and did her best to convince him there were better ways to rule a country. Adam gifted Tomaz with the amulet of Isis, which gave her powers similar to his as the goddess Isis.

The two were eventually married, and not only were they able to rule Kandaq peacefully, but also found Adrianna’s brother, Amon, who had been captured and tortured by Intergang. Much like Freddy Freeman, Amon suffered a permanent disability because of it and is granted powers by Black Adam, becoming Osiris.

While the Marvel family is a story of hope, the Black Adam family is one of tragedy. Sobek, the family’s trusted servant (also an anthropomorphized alligator) eventually kills Osiris, while Isis dies in battle against the manifestations of the Four Horsemen, granted physical form by Doctor Sivana (none of them looked like Ric Flair, though. Weird.).

Triumph and tragedy. Love and loss. Happiness and anger. The Marvel and Black Adam families are opposite sides of the same coin. While we won’t see Black Adam go against Billy Batson in the upcoming film, a battle against the two is inevitable (we can’t wait to see Dwayne Johnson in an official superhero movie, finally). If history is said to be doomed to repeat itself, then a battle of the families won’t be far behind.

Shazam! opens in theaters April 5th. Get your tickets here.