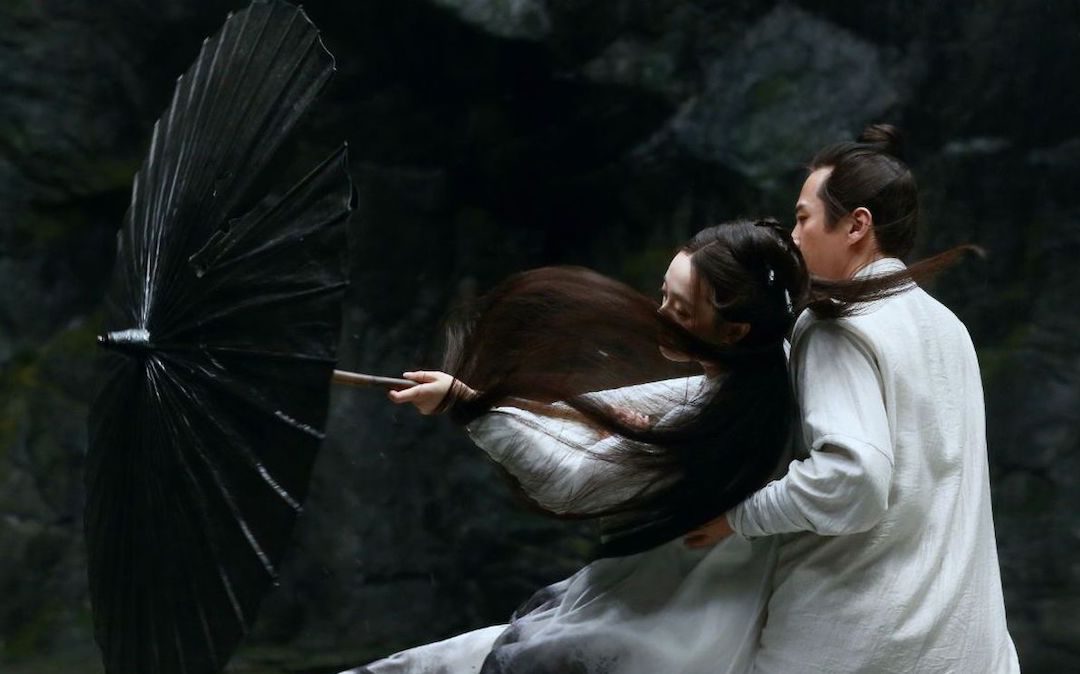 ‘Shadow’: A Film That Defies The Damsel in Distress Trope

Writer-director Zhang Yimou is known for creating films with intriguing characters and stunning visuals. His two wuxia martial arts films, Hero (2002) and House of Flying Daggers (2004), are known for their breathtaking set pieces, cinematography by Ding Xiao Lin and artistic action sequences. As a huge fan of Zhang, I was beyond excited to see what he had in store for audiences with Shadow, his latest foray back into the wuxia genre of martial arts films. Zhang stripped the color palette down to pure black, white and shades of grey with the barest hints of color shown by the character’s skin, foliage and blood in order to mimic traditional Chinese ink paintings and calligraphy. When I first saw Shadow at the 2018 Toronto International Film Festival, I had no idea just how much of an impression this film would leave on me, not just because of how beautiful it is, but also because of how pivotal a role femininity and female agency would be to the story.

Shadow begins with Madam Xiao Ai (Sun Li), the wife of Commander Zi Yu (Deng Chao), looking through the crack of giant palace doors with a look of panic and fear on her face. It’s clear whatever is waiting for her on the other side may be as frightening as what she’s running from. In the next scene we see Pei Liang (Ryan Zheng), the King of Pei, learning that the Commander visited the neighboring city, Jing, and ended up challenging General Yang (Hu Jun) to a duel, putting the truce both kingdoms have adhered to since Pei lost the other city when Yang bested the Commander in a duel. Should Commander lose once again, war could be inevitable.

On The Surface, It’s The Men Who Run The Show

We next see Madam interpreting runes cast on a board with the yin-yang symbol. Across from her is Princess Qing Ping (Guan Xiao Tong), King Pei’s younger sister. Madam tells Qing Ping that the reading is about “masculine power,” and “there is no place for women” there, but as the film goes on, this seems to be not quite true. Qing Ping sees it as a positive sign that her brother’s control over the kingdom is secure, and their army’s triumph in the forthcoming war is guaranteed. But there is one hitch: instead of months to prepare, they only have seven days, until the rain falls and the water levels rise.

It soon becomes clear the King and Commander are not on the same page. The Commander failing to seek permission from the king before approaching Yang is an obvious sign that he has no respect for the King or is even willing to pretend to as King Pei is somewhat immature. In an effort to appease Yang, and unbeknownst to Qing Ping, King Pei decides to offer his sister’s hand in marriage to Yang’s son, Yang Ping (Wu Lei), but it is later rejected when Ping sends a ceremonial dagger with an insulting offer to take Qing Ping as his concubine instead.

As the King prepares to send his envoy to Yang, it is shown that the Commander is actually a “shadow” named Jing (also played by Chao) of the real Commander, who was been severely wounded in the first duel with Yang, is now hiding in a secret cave beneath the palace. For the film, the word “shadow” has many meanings and contexts. Visually everything has and creates a shadow, the people, their flowing robes, candles and even the silk screen partitions. Contextually the characters, especially the women are in a sense “shadows” themselves.

But The Women Work From The Shadows On Their Own Terms

While Jing is caught between his true identity and living as Commander’s shadow, Madam and Qing Ping are also living in the shadows of their husband and brother. Acting as the wife to both men in public, Xiao Ai has to be constantly on guard so as not to arouse the suspicion of King Pei and members of his court, and behind closed doors she is constantly on guard to keep her developing feelings for Jing hidden from her husband, who taunts her about falling in love with Jing. As Zi Yu tells her that he’s being kept in a cage and afraid of being lost to the dark, the Commander forgets that Xiao Ai herself is trapped right next to him.

As a woman, she is expected to show unwavering support for her husband and loyalty to her sovereign, but rather than be a spectator to the circumstances of her own life, Xiao Ai is unafraid to speak up when placed in uncomfortable situations by the men surrounding her.

Likewise, Qing Ping, as the younger sister of the king, isn’t what you expect her to be. Qing Ping is also outspoken, and has no qualms about sharing her opinion with the King in front of his generals and ministers. When she learns of Ping’s offer to make her his concubine, she accepts the terms and his dagger, surprising everyone, but not before letting her brother know that she won’t stand by and be a pawn in whatever game he’s playing.

In a film where the majority of the main cast, supporting characters are men, and the dialogue revolves around them plotting how to take control of cities and each other, it would be easy for the female characters to be overlooked. But Zhang Yimou does a deft job at keeping them central to the story without making it obvious. In most action films martial arts are portrayed as being masculine discipline, especially in modern blockbusters, but in Shadow, Zhang uses the softer and deceptively gentle movements of women to show how powerful we are if given the chance to show it.

There are numerous examples in the film of attributes that are normally associated with women and the feminine being used to show strength, knowledge, and the influence women can have on the men in their lives. Scenes like King Pei doing calligraphy in the main hall may appear to center him, but a closer look at the framing of the scene reveals he’s mimicking – or shadowing – the movements of court dancers further in the background behind him.

In what is one of my favorite scenes in Shadow (and any Zhang Yimou film) the role that women, female agency and femininity all play becomes apparent. Needing a new technique to defeat Zhang’s famous three-round saber technique, Commander has been practicing with Jing, but to no avail. Seeing the men struggle, Madam suggests that she may have a way to use the traditional Pei umbrella in a new way. Rather than dismissing her, Commander immediately accepts and instructs Jing to follow her directions. It’s worth noting that as this scene takes place, as Jing stands behind Madam following her movements, he is no longer wearing his usual dark colored robes but instead a pure white tunic and pants, similar to her robes which are mostly white with swirling shades of grey. In essence, he has now become her shadow, but one formed by a clearer light than the one cast by the Commander.

The Fighting Style Mimics Women – Both Beautiful And Deadly Effective

The parasol becoming a traditional fighting tool for the people of Pei, and the smooth, sweeping movements (mimicked and enhanced by the elegant camera work) of Madam easily being turned into a defensive tactic are subtle ways to show there is more to women than it appears; surface beauty hides an edge given to us by quick and clever minds. Anyone familiar with Zhang’s work knows the women of his films should never be underestimated, and living lessons to never judge someone by their appearance. As in House of Flying Daggers, where Xiao Mei shows that her blindness is not a hindrance to her skill as a fighter and dancer, Madam demonstrates an umbrella can be an effective weapon, and her a formidable weapon in her own way. Later, that parasol is tipped in razor-sharp blades and used in what I have to describe as one of the most inventive and bonkers action sequences I’ve ever seen.

The fight choreography in the third act is unique and beautiful. On one side there is the Jing City army, decked out in full battle armor, wielding long-handled sabers, and on the other, the army of Pei City, a group of male convicts who all have strikingly beautiful and effeminate features, carrying metal parasols demonstrating techniques created by a woman. Like the yin and yang, they are opposites but similar. In the midst of them is Princess Qing Ping, refusing to leave her fate in the hands of her brother, determined to confront Ping and return the dagger he sent to reclaim her honor.

As Shadow draws to its conclusion, the men have fought their war both within and outside of the palace, but the fate of the kingdom lies not in their hands as the runes had predicted at the beginning, but in her hands alone. The choice of leaving her husband’s shadow and leading Pei – and the reclaimed Jing City – to a new future now rests on her shoulders, and there is nothing more powerful than that for a woman.

Shadow is currently in theaters for a limited run. Get your tickets here.