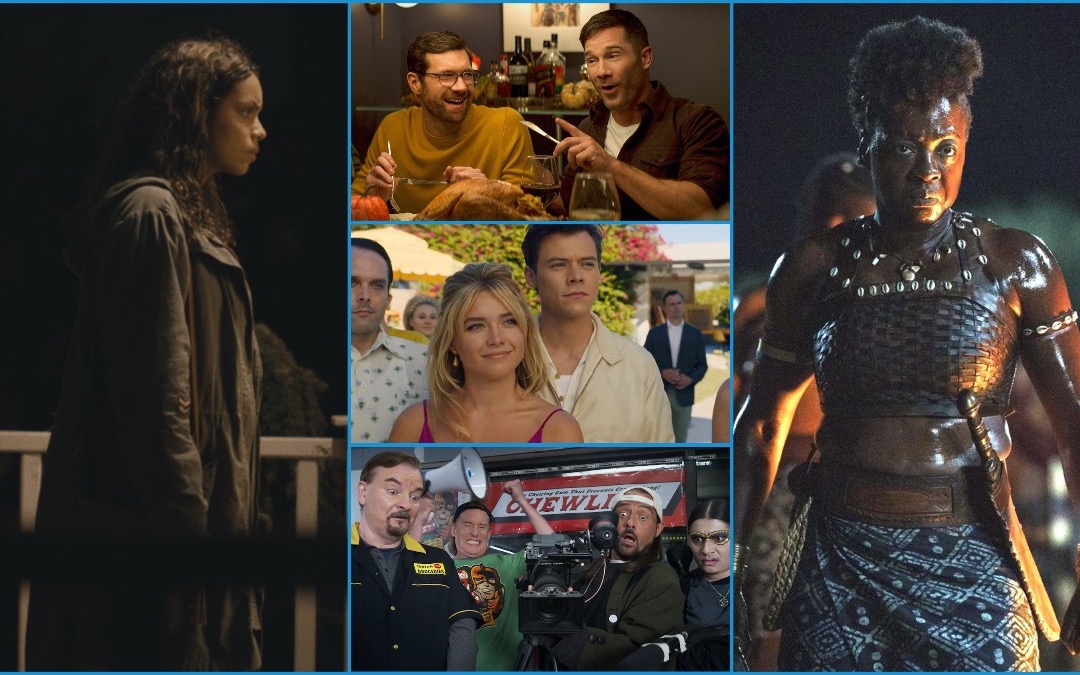 September has arrived, bringing with it the start of school, football and hockey preseasons, and, later, a chill in the air as fall creeps close. It also brings with it some big movies and exciting features hitting theaters. This month has it all: a huge historical epic, a wacky murder mystery, a long-awaited third movie featuring some beloved slackers, a queer rom-com, one big Indian epic, plenty of horror, and more.

Here are all the wide-release movies coming to theaters in September 2022. Get tickets here.

September 2022 officially kicks off with Barbarian. Georgina Campbell stars as Tess, a young woman who travels to Detroit for a much-needed job interview. She books an Airbnb rental for her stay but when she arrives late one night, she discovers that it’s been double-booked and she has to share her rental with a strange man (Bill Skarsgård). Tired and not wanting to find another place, Tess decides to stay the night, against her better judgment. But she soon finds that a weird roommate is the least of the things she has to fear.

Indian cinema has a strong showing this month with Brahmastra Part One: Shiva. The action-adventure fantasy follows Shiva, an ordinary man who suddenly discovers that he has the power to awaken a powerful weapon with the potential to destroy the world. Soon, Shiva reluctantly embarks on a journey of love and adventure. All the while, the evil queen Junoon is determined to get her hands on the weapon herself for nefarious purposes. It’s up to Shiva to save the world while also discovering who he is along the way.

Nearly 30 years after the first Clerks hit theaters, original stars Brian O’Halloran and Jeff Anderson are back as Dante and Randal, the beloved slacker Quick Stop employees in Clerks III. Rosario Dawson and Trevor Fehrman join the cast as new characters Becky and Elias. The film finds Randal suffering a massive and unexpected heart attack and having a near-death experience. Afterward, Randal determines to film a movie about his experiences at Quick Stop with Dante in a movie that is as near an autobiography for Kevin Smith as anything he’s made.

The first great historical epic of the fall arrives with The Woman King. The movie follows the real Agojie warriors, the all-female warrior unit who fiercely defended the African kingdom of Dahomey in the 18th and 19th centuries. The Angojie are led by their general, Nanisca, who trains new recruits. As an outside danger threatens to destroy their way of life, Nanisca trains her Angojie warriors to defend their kingdom and culture with everything they have.

An all-star cast comes together in the wacky murder mystery See How They Run. In 1950s London, the production of a movie adaptation of a smash-hit West End play is abruptly upended when the director turns up dead. Not just dead of natural causes, that is, but murdered. Cynical Inspector Stoppard is assigned to the case, where he’s joined by Constable Stalker, a bright-eyed rookie who is a little too eager. The two are thrown into a twisting, turning whodunit, exploring the dark and seedy underbelly of London’s theater scene. As they get closer to the real identity of the murderer, their own lives are in even greater peril.

This month, Olivia Wilde returns with her sophomore directorial effort Don’t Worry Darling. Florence Pugh and Harry Styles star as Alice and Jack, a young, married couple in the 1950s. He talks her into moving to an experimental utopian community his company is developing, and at first, it seems idyllic: beautiful neighbors, flowing cocktails, and perfectly manicured lawns. But soon, Alice starts to realize that things are not what they seem in their seemingly perfect community and that the development hides dark secrets–and it won’t let them escape.

Norman Partridge’s Bram Stoker Award-winning novel is finally getting the adaptation treatment. Dark Harvest tells the story of one small Midwestern town’s recurring nightmare. A monster called October Boy rises every Halloween from the cornfields around the two, armed with a butcher knife and a bloody intent to kill whatever unsuspecting straggler he comes across. Those who are brave enough to confront him die a gruesome death, while the rest hide and lock their doors. However, whichever young man finally succeeds in killing October Boy will be allowed to leave the town and his family gets a new home, car, and all their bills paid. However, the town hides a secret even darker than the October Boy himself…

Say hey to Bros, the first LGBTQ+ rom-com from a major studio. The ins and outs of dating in the queer community are skewered in a hilarious way. Bobby is a successful career man, happy in his single life. But when his friends encourage him, the forever commitment-phobe reluctantly agrees to start dating. When he meets Aaron, a fellow commitment-phobe who seems far out of his league, Bobby finds himself falling in love. As he gets in deeper, Bobby freaks out and threatens to blow up the whole fledgling relationship that might be the best thing that ever happened to him.

This might well be the creepiest horror movie of the year. Smile follows Dr. Rose Cotter, who has a great life and career until a strange, traumatic incident with an unstable patient upends her peace of mind. Soon after that unsettling encounter, Rose starts to experience bizarre and scary occurrences that she can’t explain. As her own brilliant mind turns on her and she becomes overwhelmed with terror, Rose must confront her past to escape her horrifying new reality.