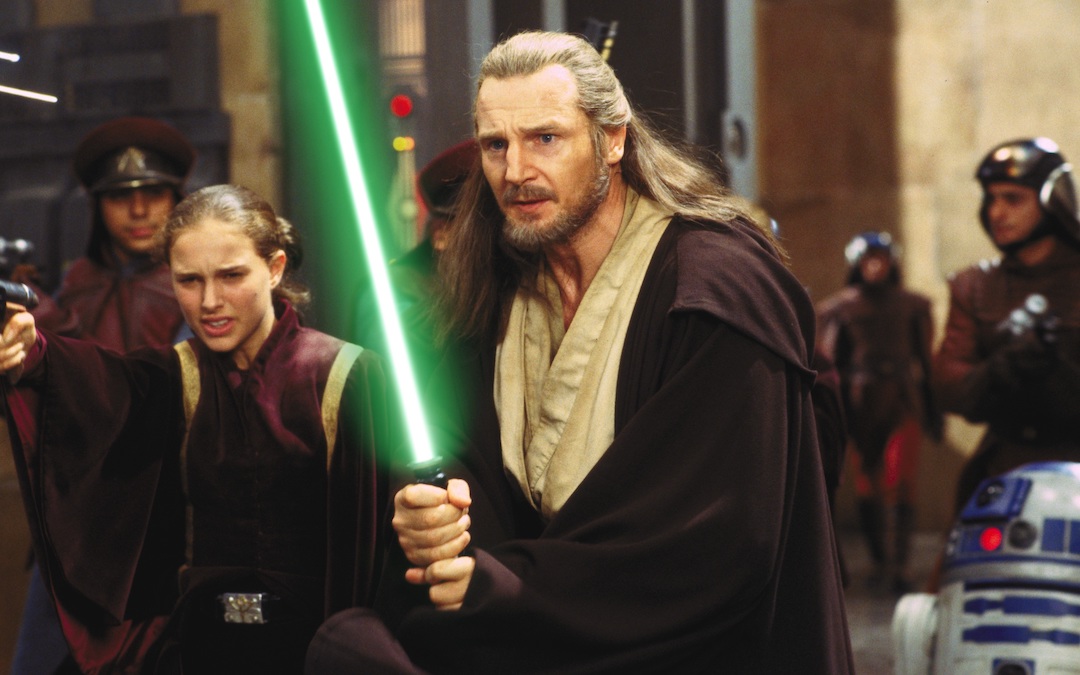 See ‘The Phantom Menace’ Brought To Life In ‘The Beginning’

Among decades of disposable DVD extras and supplemental Blu-ray curiosities, there’s one 66-minute documentary that towers far above most: The Beginning. Directed by Jon Shenk, The Beginning: Making Episode I is a fly-on-the-wall look behind the curtain of Lucasfilm and its renowned visual-effects studio, Industrial Light & Magic. The 2001 doc follows filmmaker George Lucas from 1997 to ’99, as he sets out to try and recapture the audacious vision of his original 1977 triumph, once known simply as Star Wars.

The Phantom Menace, which went by the working titles of Episode One and The Beginning at various stages of production, takes place more than 30 years before the first Star Wars. It depicts the legendary Jedi Knights, a teenage queen, and a young slave boy who’s destined to grow up and become the monstrous Darth Vader. The first theatrical Star Wars release since Return of the Jedi 16 years prior, Menace became one of the most anticipated films in history — a cultural event carrying the weight of impossible expectations. Naturally, Episode I left critics divided and older audiences disappointed. It was a very different Star Wars movie than the ones they’d experienced as children or as adolescents, and its director (who hadn’t received a directing credit on the series since ’77) was perhaps a different artist: a little older, divorced, doing his best to be a good father while keeping his entertainment empire afloat.

Every time I revisit The Beginning, my favorite DVD “special feature,” I’m struck by the sheer Herculean effort that went into making Lucas’s most controversial film, and by the man himself. Whatever you think of The Phantom Menace or the prequel trilogy as a whole, there’s no disputing the spectacular artistry and technical innovations it made possible. And for many of us who grew up with the second Star Wars trilogy as well as the first, Episode I seems only to get better with age.

But what about Lucas the man? He’s a filmmaker who comes from an experimental background; the style he honed in film school has less to do with the work of his contemporaries and more to do with cinéma vérité, or the “cinema of truth.” Consider American Graffiti, THX 1138, or the films he made as a student: they’re the cinematic equivalent of found poetry. And, in fact, The Beginning is a perfectly suitable example of this type of documentary filmmaking. At Star Wars Celebration in Chicago last month, Lucasfilm chief creative officer John Knoll recalled that Lucas had a film crew present for nearly every major meeting during Episode I’s production. The artists and modelmakers at ILM got so used to cameras being around, he said, that the feature “tells a very truthful story.”

In the film’s second scene, we find Lucas reviewing storyboards for The Phantom Menace, of which there were reportedly 3,500 in total. (A fresh-faced Knoll is also present.) Lucas holds a pink highlighter in his right hand; in his left, one blue and one yellow. He begins scribbling directly on each of the storyboards, using the yellow marker to denote computer-generated imagery and the pink marker to establish which parts of the image will be achieved with actors, practical models and props, and physical sets. Rick McCallum, the film’s producer, appears stoic and confident as he watches the director work. The ILM employees surrounding them are visibly nervous.

Eventually, inevitably, Lucas draws with the wrong color. He lets out a groan, and the room erupts with laughter. “I was getting so good at my ability to do this,” he says.

At this point, the essential problem with Lucas’s grand vision has nothing to do with the film’s political backdrop or the “wooden dialogue” the reluctant writer-director is famous for. Rather, the great challenge is rendering the imagery the director has in his head in a way that’ll look convincing on the big screen. His ambitions are lofty; Lucas wants to make War and Peace in space — to populate his third-act battlefield almost entirely with CGI creatures, droids, and vehicles. Using technology pioneered on landmark films like The Abyss and Jurassic Park, he hopes to push digital filmmaking to the furthest extreme imaginable, all the while maintaining the naturalistic look and feel of the previous Star Wars films. Knoll offers an understatement: “We don’t have a real good way of doin’ that right now.” This gets more laughs. Still, the director’s confident they’ll pull it off.

Lucas is prone to self-deprecation. In describing his methodology to assistant director Chris Newman, for instance, he says, “If I forget to say ‘action’ or ‘cut,’ just step in and say ‘action’ or ‘cut.’ I manage ‘action’ and ‘cut,’ and ‘faster’ and ‘more intense.’ And then mostly I sit there looking miserable and quiet.” In a later exchange, shooting on location in Tunisia, Lucas checks in with Ahmed Best, the actor playing the amphibious alien Jar Jar Binks: “How are you doing?”

Lucas tells him, “I wish I could say the same.”

When casting director Robin Gurland presents the director with three finalists for the role of Anakin Skywalker, the young child who will grow up to be Vader, each of the boys is given a screen test opposite Natalie Portman, who’s been cast as Queen Amidala of Naboo. One of the boys gives a fairly lackluster audition; another gives a fabulous one. Jake Lloyd, a lesser-known eight-year-old actor from Colorado — who played Arnold Schwarzenegger’s son in the Christmas film Jingle All the Way — brings something raw, unpracticed, but deeply authentic to the part.

“One is gonna move the production along a lot faster, and the other one, I’m gonna have to just do a zillion takes and then cut the performance,” Lucas tells design director Doug Chiang. “But the performance sort of rises way above the other one, because it’s so unpredictable, and it’s kind of unstudied.” Lloyd signs his contract on June 6, 1997.

True to his cinéma-vérité roots, Lucas eschews the easy route in favor of what he hopes will be a more remarkable end product. “I became fascinated with editing,” he recalled recently of his years at USC’s film school. “And I said, ‘This is where the film is made. It’s about these moving images and how they intercut. It’s really the editing process that is the heart and soul of a movie.’” It’s little surprise, then, to learn that Lucas prefers to do as much directing as possible in post-production.

There’s an especially touching moment in the documentary where the realities of this philosophy are laid bare. During the filming of a quiet dinner-table scene with Anakin (Lloyd), Queen Amidala (Portman), Jar Jar (Best), Qui-Gon Jinn (Liam Neeson) and Anakin’s mother, Shmi (Pernilla August), Lloyd flubs the pronunciation of a planet name — “Coruscant” — and Lucas yells cut. The other, more experienced actors appear frustrated, though they’re trying their best to hide it. Lucas stands at Lloyd’s side, giving a fatherly smile of encouragement as he asks that Lloyd try the scene again, this time ignoring the prop food in front of him. “If you mispronounce it, it’s okay,” Lucas says.

Lucas puts a reassuring hand on his shoulder, and everyone in the room assures the boy that that won’t happen. You can’t help but feel for him.

The Beginning is the story of a visionary genius making what many consider to be his worst picture. It includes such other highlights as Ewan McGregor, newly cast as the young Jedi Obi-Wan Kenobi, getting a haircut while Lucas and his children watch and offer commentary. (Katie Lucas, who will go on to write for Star Wars television, retrieves a lock of McGregor’s hair from the floor. “How ’bout that much?” she asks, to which Lucas replies: “That’s fine. Don’t get any more.”)

Another odd through line is the $100,000 rubber suit worn by Ahmed Best in the role of Jar Jar. Ultimately, the suit never once appears on-screen; the character is entirely digital. When Lucas deems this an obvious waste of money, effects supervisor John Knoll counters with the fact that it serves as a valuable tool for ILM, providing a reference for both the actor’s performance and the way lighting hits the costume in the context of each shot. If you want to learn about the nuts and bolts of moviemaking, this stuff is an endless source of fascination.

The documentary ends sometime after Episode I’s premiere, with Lucas sitting quietly at his desk. In a binder full of notebook paper, he scrawls four lines in pencil: Star Wars. Episode II. Fade in. Space.