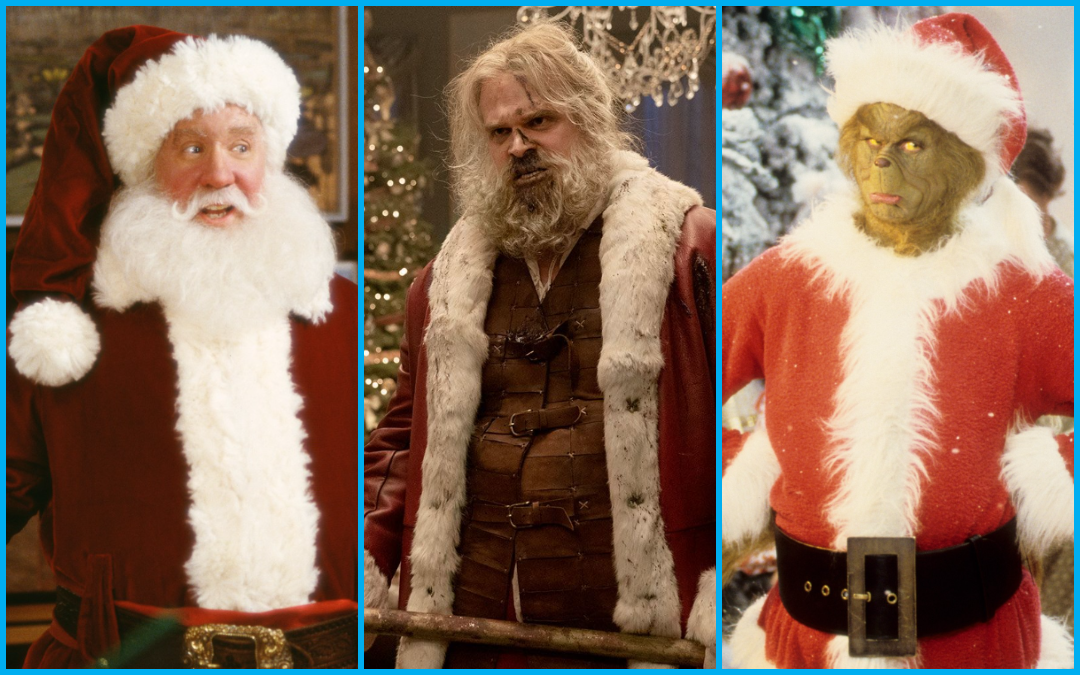 The jolliest guy in the red suit has made hundreds – yes, hundreds – of appearances across different films and television specials, making him one of the most popular characters to grace both the big and small screen alike. He goes by many names in many cultures: Saint Nicholas, Kris Kringle, Father Christmas, Babbo Natale, Sinterklaas, Père Noël. But he’s perhaps best known as Santa Claus. Of course, the real Santa is far too busy making his list and checking it twice to star in hundreds of movies and television shows, so several actors over the years have taken on the task of putting on the coat and hat to tell the tale of the magic sleigh.

This season, David Harbour of Stranger Things fame stars in Violent Night and gives us the latest take on Santa. And he’s not exactly at his holly and jolliest. In fact, this Santa is a pessimistic drunk, annoyed by the fact that today’s children only want cash and video games for Christmas. His violent past even comes to the surface when he must save Christmas not by bringing joy, but by bringing pain to a group of mercenaries that are holding a family hostage. It’s far from the conventional portrayal, but we still say Harbour’s Kris Kringle has already become a Christmas classic. Let’s look at the other Saint Nicks that we love watching again and again every holiday season.

It’s the reason so many of us are forever incapable of being able to spell “Santa Claus” correctly – without adding an “e” on the end. When Santa falls off the roof of divorced toy salesman Scott Calvin’s (Tim Allen) house, Scott becomes the new Santa by means of the legally binding agreement known as “The Santa Clause” when his son Charlie urges him to put on the red coat. Reluctant to accept the title at first, Scott undergoes the “Santafication” process over the course of the next year, but with this, he is threatened with losing his visitation rights with his son as others fear that Scott’s new Santa-like behavior has become a bad influence for Charlie. Of course, Tim Allen brings comedic excellence to the role, with an abundance of supporting characters that we love, and it brings a unique, fresh take that the role of Santa is not one guy throughout all of history, but that the title becomes passed down over time. And personally, we still want to try Judy the Elf’s shaken, not stirred hot cocoa recipe.

While Edmund Gwenn starred as Kris Kringle in the original and outstanding Miracle on 34th Street in 1947 – for which he also has been the only actor to win an Academy Award for the role of Santa Claus – Richard Attenborough stole hearts while creating Christmas magic for Susan Walker (Mara Wilson) as the real Santa Claus, working in a department store. And who would dare think to put Santa on trial? It’s a heartwarming story, but the real tear-jerking moment occurs between Kris Kringle and a young deaf girl named Sami (Samantha Krieger), who comes to sit on Santa’s lap at the department store. When Kris begins to sign with Sami, the little girl is positively delighted – a genuine reaction from the deaf actress who had not rehearsed any sign language with Attenborough, who had secretly learned some signs for the part. It’s a small moment with a big impact, and goes to show that Attenborough brought his own true magic to the film.

While Will Ferrell leads the film as Buddy the elf – a human raised by Santa’s elves in the North Pole – who leaves the snowy winter wonderland to explore The Big Apple, we still love Ed Asner’s grandfatherly Santa Claus. Asner portrayed the big man in red a whopping eight times in his career, but his work in the Jon Favreau holiday classic is by far his most well-known. Donning a big, white beard and half-moon glasses, he simply can’t turn away the cute, orphaned baby that crawls into his stocking one Christmas night. While many of the elves might resent Buddy for his comparatively low productivity with toy building, Santa always has faith in Buddy as his best elf and biggest spreader of Christmas cheer. Plus, he put New York’s Central Park Rangers on the naughty list, something they seem to have held a grudge over for years.

While the animation takes a sharp left turn into the uncanny valley, Tom Hanks, master of the craft that he is, gives the film all the warmth and lasting Christmas comfort that the original children’s book is cherished for. Initially, Robert Zemeckis had wanted Hanks to play every role in the film, but he was eventually narrowed down to six parts, including that of Santa Claus. It’s a classic take on the character, with all the kindheartedness that you would expect out of the big man, but what’s especially touching is the simple act when Santa returns a lost gift to a boy on Christmas morning. Small, but with a big reward, as the boy then continues to believe in the magic for his whole life. In the true spirit of Christmas, the film has since sparked numerous holiday train experiences all around the world, inviting the young and the old alike on their own journey to the North Pole, right in their hometown.

Based on The Guardians of Childhood series by William Joyce, the DreamWorks animated film features an ensemble of longtime Guardians: Santa Claus, the Tooth Fairy, the Easter Bunny, and the Sandman, along with Jack Frost, the newest addition to the team. Here, Santa (voiced by Alec Baldwin) – going by Nicholas St. North – doesn’t have to worry about finishing everything for the Christmas season just yet, but instead, he joins forces with his fellow Guardians to keep children all around the world safe from The Boogeyman. Excitable and full of wonder, North is surrounded by Yetis who do most of the toy building at the workshop, while the elves are less than helpful. But of course, the most notable distinctions about this Santa are his heavy Russian accent and plethora of tattoos, including the words “Naughty” and “Nice” inked on his forearms.

Kurt Russell as Santa Claus is a casting choice that we find ourselves asking “why didn’t we do this sooner?” And casting his real-life wife of over thirty years, Goldie Hawn, as Mrs. Claus makes it all that much sweeter. On Christmas Eve while out delivering presents, Santa’s sleigh is inadvertently crashed by brother and sister Teddy and Kate, and all three of them have to work together against several police officers to gather up all the scattered presents in time. With a little bit of sass, Russell’s Santa gets a rock and roll makeover with long, silvery-white locks and a beard to match, and a red leather, fur-trimmed trench coat that makes for a perfect modern update. He fits in just as well behind the wheel of the stolen, red Dodge Challenger speeding along in a police chase as he does with his hands on the reigns of his sleigh.

A fresh, diverse take on how the title of Santa is passed down over time, Anna Kendrick and Bill Hader star as Noelle and Nick Kringle, the children of the late Kris Kringle. Nick is ushered in as the twenty-third Santa, but leaves shortly before the holiday due to the stress. While trying to bring her brother back to the North Pole, Noelle learns that she has inherited several of her father’s talents that her brother simply does not have, no matter how much he tries to practice, including speaking multiple languages and being able to tell who’s naughty from who’s nice just by looking at them, as well as spreading Christmas cheer, of course. Knowing which one of them would truly make a better Santa Claus, Nick hands the reigns of the sleigh over to Noelle, making her the twenty-fourth Santa, and first woman to hold the honored generational title. It’s cheerful and delightful, and Kendrick’s bubbly positivity will warm up the whole family.

Bonus: How the Grinch Stole Christmas (2000)

We know what you’re thinking. But the Grinch isn’t Santa! He disguises himself as Santa and steals Christmas – that’s the opposite of what Santa does! Yes, he can put on the red coat and hat, build his own sleigh, and have his dog Max as his trusty reindeer to guide him through the night in Whoville. And we agree, he is still the Grinch, not Santa. But by taking away all the physical presents and decorations from the Whos out of his own hatred for the holiday, the Grinch does give them a gift (much like Santa): the reminder that Christmas is all about spending time with family and friends, not about presents. And with Jim Carrey’s laugh-out-loud, sarcastic characterization of the Grinch, we just couldn’t leave this off our list.