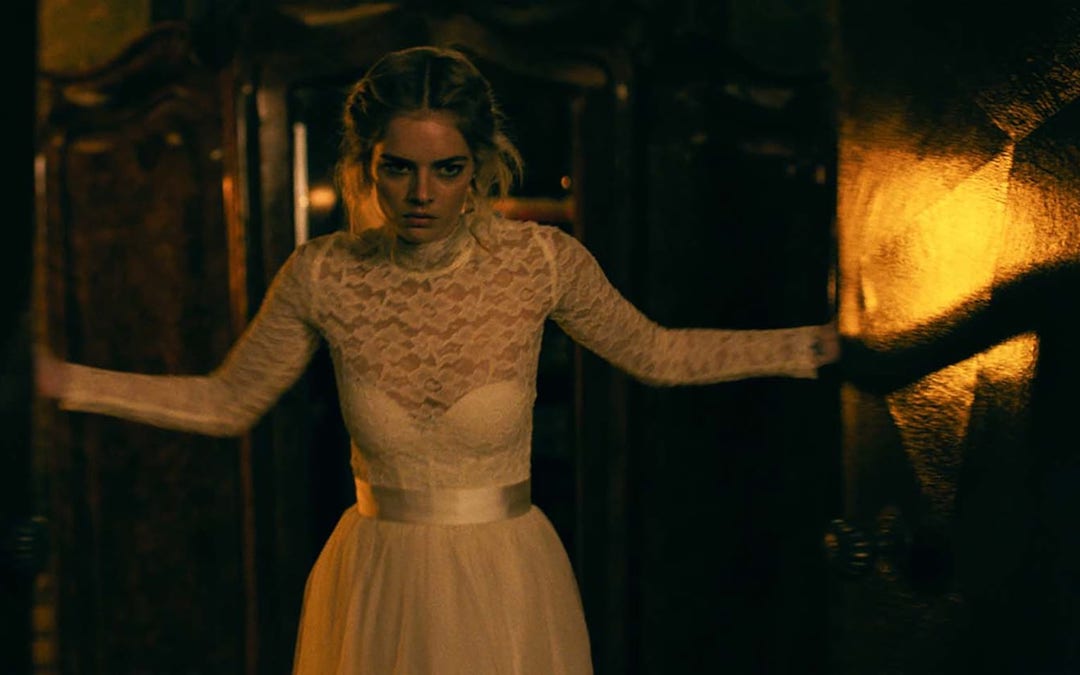 ‘Ready Or Not’ Review: Three Reasons To See It

If you keep your finger even the tiniest bit on the pulse of the horror community, then you know that Ready or Not has been one of its most eagerly-awaited movies of the year. When the first pitch-perfect trailer landed, even more people sat up straight and took notice of the zany, dark horror-comedy.

Directed by Matt Bettinelli-Olpin and Tyler Gillett, with a script by Guy Busick and Ryan Murphy (no, not that Ryan Murphy), Ready or Not is the story of Grace (Samara Weaving), a spunky, sweet girl about to marry Alex Le Domas (Mark O’Brien), and thus into the Le Domas gaming empire. We’re talking old, old money here. Rich people are eccentric and weird, so when Alex explains to Grace it’s a tradition that every time someone marries into the family they have to play a game on their wedding night, she blows it off as normal rich people oddity. But Grace soon finds out that the game she draws at random, Hide & Seek, is a very different sort of game. As in, if they find her, they kill her in order to fulfill a pact they made with the Devil generations ago to ensure the family’s prosperity. Rich people, right?

The trailer looks great, but does the movie itself live up to expectations? Does all the anticipation for it pay off? It’s already been an incredibly strong summer for horror, but Ready or Not is the best of the bunch so far. Read on for three reasons you’ll definitely want to see this when it hits theaters this week.

1. It’s The Most Fun You’ll Have At The Movies All Year – No, Really

I can honestly say I have not had as much fun at a movie this year as I did at my screening of Ready or Not. It’s that entertaining. It’s partly helped by its zippy, just over 1.5-hour runtime. While plenty of recent horror movies have been interested in building slow, atmospheric burns, Ready or Not gets right to the action. It gives you just the amount of exposition you need to understand what’s going on, and then the game begins. And that game is incredibly fun, populated by eccentric, memorable players.

The real driving force of the movie is the chemistry between the characters. Their dysfunction is the web that holds them together, woven with acerbic banter and pointed barbs as they go about the business of trying to murder Grace. And oh, are they bad at that business; for a group of people whose very lives supposedly hinge on them sacrificing someone, they are blisteringly incompetent at it. Pill-popping, ditzy Emilie (Melanie Scrofano) has no clue how to use a gun, her husband, Fitch (Kristian Bruun), spends most of his time hiding and looking up “How To Use Your Crossbow” videos on YouTube.

For my money, Adam Brody as Daniel is the co-MVP of the movie. It might be typecasting to put Brody in the role of a rich, sarcastic wastrel, but it’s typecasting for a reason. Few actors can deliver deadpan with the surgical accuracy of Brody, and his droll observations in the middle of the clusterf**k of their own making provide unexpected laughs. Daniel is a screwed-up drunk, but also the moral center of his degenerate family, the one member of the Le Domas clan to keep everyone else’s egos in check. Brody’s sarcastic commentary and Scrofano’s coked-out pep talks generate the most comedy of the movie, but the entire cast is great together. They are the worst elements of the 1% cranked up to 11 and with the brake lines cut.

2. Samara Weaving Kills It As The Most Relatable Final Girl

If a bunch of people are trying to kill you, you might as well find the humor in it (Courtesy: Fox Searchlight)

Hardcore horror fans have known and loved Samara Weaving for a while thanks to her starring roles in Mayhem and The Babysitter. Other fans may recognize her from recurring role on TV series SMILF or miniseries Picnic at Hanging Rock. But she has yet to break out in a big way. Ready or Not should change that. Weaving deserves a career blow-up, and this movie makes it feel as if she’s right on the cusp. Stars – the real deal kind, not the kind of celebrity manufactured by publicity stunts and branding – have a certain je na sais quoi that makes you want to watch them. It’s that intangible quality that draws you to them, makes you care about them when they’re on screen. That sort of star quality is impossible to define; you just know it when you see it. It radiates from Weaving like perfume.

From the opening scene of the movie, where a bridal gown-clad Grace is muttering sarcastic wedding vows to herself, you’re on her side, even before she’s in danger. Grace is neither a damsel in distress nor a suspiciously competent Mary Sue; instead, she’s one of the most relatable Final Girls of the last few years. She drops the f-bomb with abandon, worries what her new family will think of her, loves her fiancé deeply, uses sarcasm to hide her nerves, wears beat-up Converse, has meltdowns – in other words, she’s real. But a character written in a real way is nothing without an actress who can deliver the range of emotions as naturally as Weaving. The Le Domas might be the 1% but Grace is the rest of us: Doing our best to game a system built by the rich and stacked against us, armed with little but our foul mouths and gallows humor.

Grace wanders the halls of the Le Domas estate in ‘Ready or Not’ (Courtesy: Fox Searchlight)

I’d be remiss if I didn’t mention the setting of Ready or Not. Set in the fictional Le Domas estate, the movie was shot at Toronto’s historic Casa Loma mansion. The Gothic Revival style home, which took three years and 299 workers to complete, has been a popular filming location over the years. But few projects have utilized Casa Loma’s unique architecture and grounds like Ready or Not. The cinematography is frequently gorgeous thanks to the stunning setting; every shot is dripping in rich, polished woods and burnished metals. Antique furniture and artwork litter every square inch, not one square foot doesn’t feature the exquisite craftsmanship that only the old money rich can afford.

That’s only one half of what makes the setting so memorable, though. The Le Domas mansion is practically a character in its own right. Grace interacts with it constantly throughout the movie, whether hiding in one of the servants’ passages or the dumbwaiter, taking the weapons it offers or finding escape in the garden and forest outside. The deadly Le Domas game has strict rules and the house feels like an entity that is not allowed to directly interfere in the events unfolding but does what it can to passively help Grace when she needs it most. In most single-setting horror movies, the setting is treated like a prison; in Grace’s case, it’s a reluctant prison that becomes her ally. It makes for a much more interesting use of a single space than you normally see in most horror movies, and it elevates Ready or Not‘s story in ways that are subtle but impactful.

Simply put, this is one of the most surprising, entertaining movies of the year. For a simple horror-thriller, it’s incredibly layered and well-crafted. Seriously, go see this one. You won’t regret it.

Ready or Not is in theaters on Wednesday, August 21st.