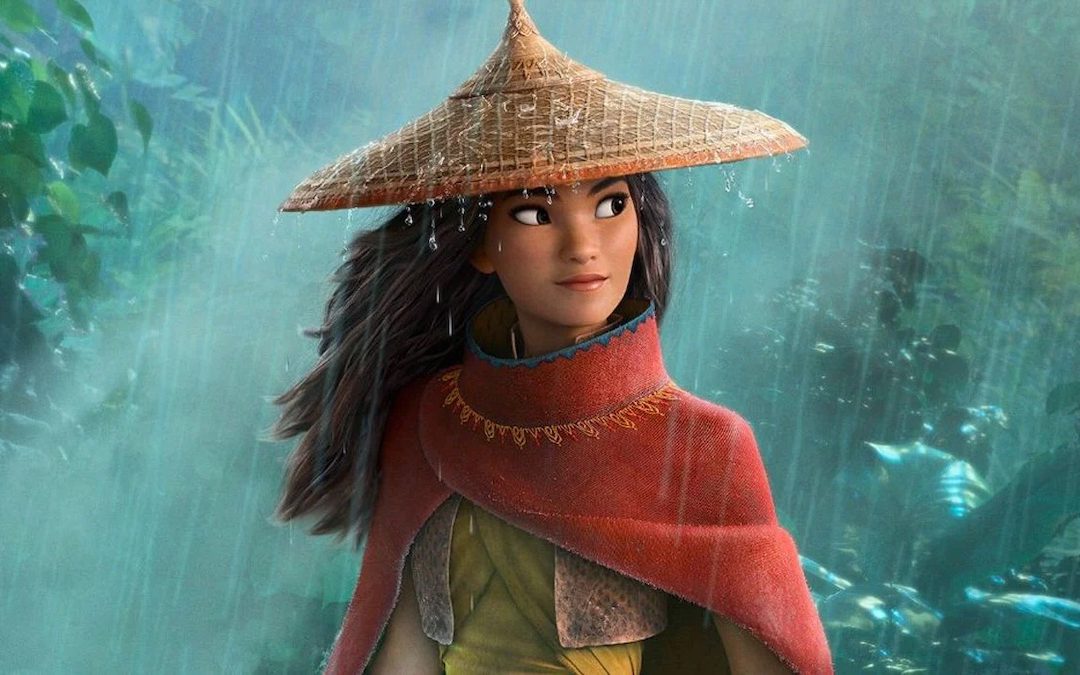 This week, Disney’s Raya and the Last Dragon hits theaters and Disney+ Premier Access. It’s Disney Animation’s first film inspired by the diverse culture and people of Southeast Asia and the team behind it spent months researching and years perfecting the story and depictions with a number of cultural consultants. The result is a gorgeous Southeast Asian tapestry wrapped in the trappings of an ancient myth.

The story follows Raya, the warrior-princess of the Heart Kingdom of Kumandra. Once, Kumandra was a single, united kingdom centered around a giant river in the shape of a dragon. Five hundred years ago, the evil Druun – shadow monsters that turn people to stone and devour all they touch – invaded, sending the kingdom into chaos. The ancient guardian dragons fought at the side of the humans, but in order to save the people of Kumandra, all the dragons save one had to sacrifice themselves by offering up their powers to create a single Dragon Gem to defeat the Druun. Instead of the Dragon Gem uniting Kumandra, however, the jealousy and suspicion between the regions grew and the kingdom of Kumandra broke into five smaller kingdoms: Heart, Fang, Spine, Talon, and Tail. Now, the Druun have returned and once again threaten to destroy Kumandra. It’s up to Raya to track down the mythical last dragon that is rumored to still exist in order to save not just her people, but the people of all five kingdoms and unite Kumandra once again.

Disney recently held the press conference for Raya and the Last Dragon and it was clear from talking to the cast, writers, directors and producer that the movie was a labor of love. Participating in the press conference were the voice talent, Kelly Marie Tran (Raya), Awkwafina (Sisu), Gemma Chan (Namaari), Daniel Dae Kim (Chief Benja), Sandra Oh (Virana), Benedict Wong (Tong), Izaac Wang (Boun), Thalia Tran (Little Noi), directors Don Hall and Carlos Lopez Estrada, producer Osnat Shurer, and writers Adele Lim and Qui Nguyen. It meant something enormously important to each one of them to be a part of bringing a little-represented culture to on-screen life – Lopez Estrada even mentioned how they’d had “teary conversations” with almost every member of the cast recalling what the story meant to them as they were making it.

For Lim, there was magic in being able to pick and choose different cultural aspects and designs from different countries around Southeast Asia and weave them into something greater:

“[T]he wonderful thing is what we all found, first of all, in all Southeast Asian countries and cultures there’s such a strong spirit of community. If you look at even one country, like the country I grew up in, Malaysia, there are so many races, cultures, religions. So many ways for us to view each other as the enemy or view each other as the other. But when you truly look at what makes our culture amazing and sings, whether it’s our arts or our food, the best street food in the world, it is because of all these different elements really coming together and creating something transcendent.”

Nguyen agreed, adding, “It is a fantasy, and I always equate it to like the Arthurian legend or Dungeons and Dragons. These Western fantasies based on like a mishmash of Western cultures,” he explained. “This is our chance to kind of create our Excalibur and our Arthurian legend. And so it was something to celebrate a culture that Adele and I grew up in and to make legendary heroes that our kids can aspire to.”

As for those kids, 13-year-old Izaac Wang appeared at the virtual press conference proudly showing off traditional Laotian garb, explaining what it was and how important it was for him to see things like it on screen:

“This is a pah bieng. It’s a ceremonial Lao traditional accessory that people usually wear to ceremonies and temples. And if you go to Laos, you can actually see people walking around wearing these if it’s like a special day or it’s a special time for a certain someone. And it’s pretty crazy to think that the 450 people who worked on this movie stuffed a bunch of different cultures to this single movie. It’s amazing to see all the things that are included in this movie, including the food and some of the weapons that you see, for example the Kali sticks that I saw, which really stood out to me. And there’s a bunch of other different things that I can’t even name because I don’t even know the name of them because I’ve been centered around a couple cultures my whole life, and just to see all these different cultures is really amazing to me.”

Thalia Tran was most moved by the themes of community and family, whether biological or found, that underpinned Raya. She spoke about how her character, Noi, embodied all that she loved and responded to most about the story, traits that are found so strongly in Southeast Asian communities:

“[T]hat sense of comradery and that strength within, that group of people and that sense of family is definitely something that I related to personally. And I know growing up in a Vietnamese family that family always, always comes first, from the traditions to just everyday life. Family is just such a huge part of it, especially now in quarantine with my family all the time [LAUGH], but it’s just something that definitely clicked with me. And I’m like, yes, I know what it feels like. And for her to be so young and to have her family turned to stone by the Druun and her to have to kind of raise herself with the Ongis and that sense of strength that she has to develop, I think that’s something that’s also very common in Southeast Asian families. I think there’s just a lot about Noi that even though she can’t speak it into words that people will connect with, hopefully, and I definitely connected with.”

It was that idea of community and camaraderie that resonated so strongly with Oh, albeit she came at it from a slightly different angle. For her, it wasn’t as much about family, but about learning to trust the people around you, even those who may have wronged you in the past. The lesson about opening up to others was what stayed with her:

“[W]hat I appreciate about Fang and our characters, is that they’re complex. There’s no black and white in these characters, which I greatly appreciated. And, [LAUGH] moving it slightly, just barely, into a global aspect, barely, barely into a global aspect, I was extremely moved by the message of this film because I feel myself struggling to learn how to trust as well. So to play a section of the film where it seems we are antagonists or the people who are struggling to take power, who are the powerful people, I feel like the storytelling and the characters, particularly Gemma’s character, Namaari, has a very nuanced and more complex look at things, which is where I feel like we need to bring storytelling anyway to a more nuanced point of view. So I was really happy to be a part of that.”

Springboarding off Oh, Chan and Kelly Marie Tran spent some time talking about the love-hate dynamic between Raya and Namaari and how it’s a complex female relationship we don’t often see on screen, much less in a Disney movie. “I just love the fact that they have this kind of love/hate dynamic. But at their core, they have so much in common,” explained Chan. Kelly Marie picked up her thread, explaining how it inspired her in her own life:

“I think about just how difficult it is to get out of your own biases when you’re looking at someone who you see as an enemy and then just how incredibly, by the end of the story, Raya and Namaari are then suddenly willing to step outside of themselves. They risk everything for this idea of community, this idea of what their relationship could have been this entire time. It’s really, really inspiring. It’s something that I want to do in my own life.”

Chan nodded. “It kind of shows how when we’re young and as children we don’t inherently hate each other,” she mused. “It’s something that is learned. It’s something that comes through whether it’s from a parental or family influence, or from your particular tribe. Those things are learned, whereas, you know, kids get on. I think that’s something to take from the movie that those things can be learned, but they can be unlearned as well.”

Nguyen got serious for a moment, reflecting on the current state of the world in regard to Asians and Asian-Americans and the rise in hate crimes against them since last year, feeling that Raya couldn’t have come along at a better time. “There have been some times where in the last 365 days there’s been a lot of negative imagery and words said about Asians,” he said soberly. “So it’s hard not to appreciate that this movie’s coming out and-and kind of giving a counterpoint and just telling a positive story that just celebrates Asian American skin and Asian American lives, and Asian American people.”

Lopez Estrada elaborated on this point, explaining that movies, especially hopeful ones like Raya and the Last Dragon, can create a sense of empathy. “I would just say that the most powerful thing that I think film can accomplish is it can give someone an opportunity to experience life through someone else’s eyes, someone who gives you a perspective that you wouldn’t have,” he explained. “If we’re able to bring a little bit of that light and a little bit of that empathy to people, we would.”

And the veteran Daniel Dae Kim ultimately summed it all up beautifully, speaking to what it will mean to young Asian children all around the world to see themselves represented on screen:

“I think we can’t undervalue the power of the fact that this is a Disney movie and the people that will be watching this movie by and large are families, parents with their children, seeing this kind of representation, and understanding what is possible…I’m also thinking about all the children who will be seeing Raya for the first time and seeing an Asian strong female who kicks ass and becomes a queen. She’s on the path to becoming a ruler and she’s being groomed by her father to do that in a loving relationship. All of these things are such a positive portrayal. And as Qui was saying, it’s exposure that brings understanding and that understanding is what changes [hearts].”

Said Wong, “Our beautiful film [is] showing us that love really can lead the way.”

Raya and the Last Dragon is in theaters and on Disney+ Premier Access on Friday, March 5.

Get Raya and the Last Dragon tickets.