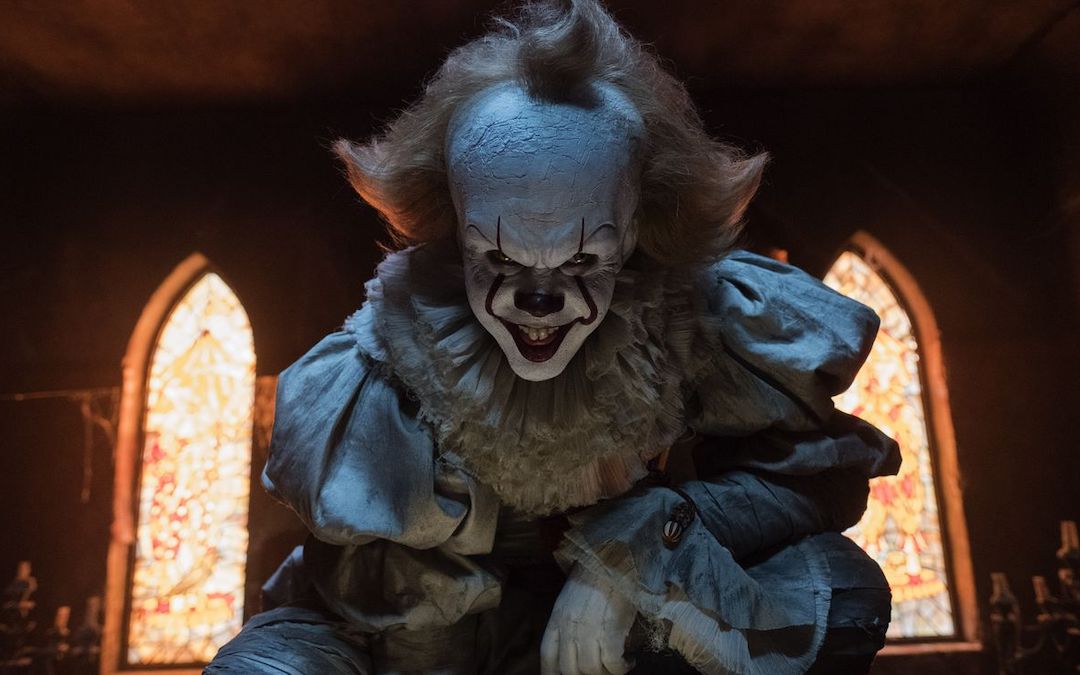 Oh, sure, on the surface he is. He writes about monsters and baddies both supernatural and human, and that’s naturally what we think of first. But dig a little deeper beneath the surface of his writing, and you’ll find a whole sprawling mythology full of cosmic entities and parallel worlds and a giant, black tower holding all of creation together. And, fitting right into that mythology is Pennywise the Dancing Clown. In the first It and It Chapter Two, the origins of Pennywise were only briefly touched upon. The two-parter made clear he was ancient and not of Earth, but it largely steered clear of the deeper mythology.

Wait, you might be thinking, he has a whole mythology? Isn’t he just a shapeshifting clown-monster?

But you’d be wrong. His story is so much wilder than that, and it’s just one part of Stephen King’s vast cosmic puzzle. Bear with me, ’cause this is about to get weird.

It Is Actually An Ancient Cosmic Force Of Destruction

Pennywise is just a mask, an act that It uses when convenient. It is the real monster behind the monster. If you want to get technical, It is an alien, but It’s origin goes well beyond that. It is actually an ancient cosmic deity. A god of destruction, not just of our world, but of multiple worlds and even multiple universes.

It originated in a vast cosmic void between worlds that has been called, at times, the Macroverse, and in King’s Dark Tower series, the Todash Darkness, in a space It refers to only as the Deadlights. It and the Deadlights are one and the same, with It’s natural, metaphysical form existing only in the Deadlights. That true form is unknown, unable to be comprehended by the human mind. At times when It has allowed humans to glimpse that part of itself, gazing into the Deadlights has driven almost every one of them insane. What’s not entirely clear is whether or not It was birthed randomly out of that void (fictional cosmic physics, they’re murky). But it’s likely It was created by Gan, a.k.a. The Other, the creative overforce in Stephen King’s universe, god of all gods, who created…well, everything.

Most importantly, Gan created the twelve benevolent Guardians of the Beams (we’ll get to that in a few minutes) as well as the six Demon Elementals, and it’s entirely possible that It is one of these six Demon Elementals for a few reasons: One, It is closest to its true form when in its spider-shape, and none of the Guardians are a great spider. Two, while there are 12 Guardians, there are only six Demons, as the Demons have a split male aspect and female aspect. It refers to itself in the book as male, but at the end, when it shapeshifts into the giant spider, characters note It is pregnant, with Audra Denbrough thinking, “Oh, dear Jesus, it’s female.”

But even an ancient, demonic force of destruction as powerful as It needs a balance, and It has one.

Maturin the Turtle, one of the twelve Guardian of the Beams and natural enemy of It (Credit: Stephen King Wiki)

Yeah, you read that right. The gigantic demon almost-spider has an enemy, and that enemy is a turtle. Not just a turtle, but THE Turtle, Maturin. Also known as his brother – Gan created them both, along with all their siblings. As a cosmic force of creation, Maturin is the natural enemy of It, the cosmic force of destruction. They have been locked in an ancient battle for eternity, diametrically opposed to one another because of their natures.

It is vengeful where Maturin is compassionate, arrogant where Maturin is shy, malevolent where Maturin is peaceful, short-sighted where Maturin is wise. But the great Turtle rarely comes out of his shell. One of the rare times he did was when he ate too much and got a stomach ache, emerging only to vomit out the universe before retreating to his slumber. Because of this, It believes his brother to be old, slow, lazy and stupid. In reality, Maturin is as powerful as It (It later grudgingly concedes Maturin is the only creature in the cosmos who is “close to his superiority”). The Turtle originally breaks his rule of not getting involved in human affairs and gives some advice to the young Losers Club in the book to defeat his brother the first time. Their father, Gan/The Other, more directly aids the adult Losers in taking down Pennywise, having realized It was knocking the multiverse out of balance with his destructive appetites.

In other worlds within Stephen King’s multiverse, Maturin is worshipped as a god and one of the 12 Guardians of the Beams, with children learning nursery rhymes for each Guardian, including the Turtle:

“See the TURTLE of Enormous Girth
On his shell he holds the Earth.
His thought is slow, but always kind.
He holds us all within his mind.
On his back all vows are made;
He sees the truth but mayn’t aid.
He loves the land and loves the sea,
And even loves a childe like me.”

Now, Here’s Where It Gets Weird (Er…Weirder)

The Dark Tower that holds up all Stephen King’s Multiverse (Artist: MIchael Whelan)

Still with me so far? Great. I mentioned that at one point, Gan himself stepped in to intervene in It’s actions. And you might have noticed I keep making references to some Guardians and some Beams. What’s that all about? Buckle up, everyone, cause here’s where it gets really weird.

When Gan created everything (I mean everything everything), all the universes in the multiverse, the Dark Tower and the Beams were created as the support structure for the entire space-time continuum. The Dark Tower is the lynchpin of not just our universe, but of all universes, the literal center of creation, and the Beams are the support structures that prop it up. Each Guardian of the Beam, like Maturin, protects the portal at the end of each Beam – think of them as cosmic bouncers. If the Beams should ever break and the Tower should fall, the entire multiverse would fall apart into darkness and raw chaos. It would mean the destruction of everything.

Naturally, that means there’s a malevolent entity out there hellbent on destroying it. That entity is the Crimson King, enemy of Gan. The side of good and order are known as The White, i.e. the people and entities who fight to protect the Beams and the Tower itself. The side of evil and destruction, known as The Red, are led by the Crimson King, who is obsessed with breaking the Beams and destroying the Tower, thus returning the multiverse to primordial chaos and recreating a new multiverse in his own image. So, yeah, he’s an asshole. Naturally, Pennywise is also on Team Let’s Destroy Everything. No surprises there.

But there’s one last plot twist that makes it even more mind-blowing.

Turns Out, Pennywise Might Actually BE The Crimson King

The Crimson King sits on his throne (Artist: Michael Whelan)

There’s a reason Gan intervenes to get It in check – his son may very well be leading the charge on the destruction that Gan is trying to stop. No one knows for certain and King has never confirmed or denied it. But there is plenty of evidence that the Crimson King, the malevolent force ping-ponging around the multiverse and trying to wreck whatever he can, is none other than Pennywise from It.

In the Dark Tower books, the Crimson King is referenced as “the great, scuttling spider-king” and is elsewhere confirmed as a shapeshifting were-spider, an attribute that It also possesses. Other references to Pennywise and similarities have popped up from time to time. In the novel Insomnia, the Crimson King appears to the hero, Ralph Roberts, as Ralph’s dead mother before shapeshifting into the form of Ralph’s deepest nightmares – another ability of It’s, to scan a person’s deepest fears and take that form. As he does so, the Crimson King remarks to Ralph, “I can be whatever I want. You may not know it, but shape-changing is a time-honored custom in Derry.”

Little did you know that while you were watching Pennywise scare a bunch of kids, he was also a cosmic spider-god trying to destroy all of creation. Puts a whole new spin on It Chapter Two, doesn’t it?

It Chapter Two is currently in theaters.