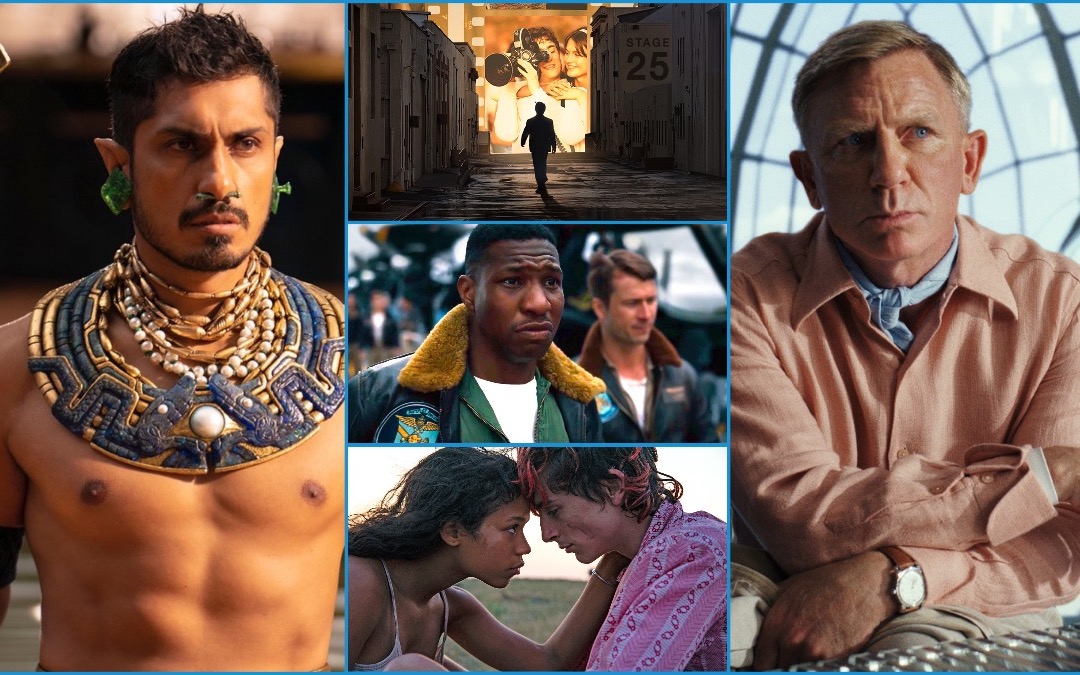 November is here, and that means we’re turning from scares and spooks to family time and post-turkey football. It also means we’re in the thick of the holiday movie season. November 2022 brings a great mix of huge blockbusters and festival darlings. This month has it all: a huge Marvel sequel, Steven Spielberg’s latest, a whodunit follow-up, Timothée Chalamet in the role that could earn him his second Oscar nomination, and more.

Here are all the wide-release movies coming to theaters in November 2022. Get tickets here.

In Black Panther: Wakanda Forever, Queen Ramonda, Shuri, the Dora Milaje and the rest of the Wakandans are reeling after the death of their beloved King T’Challa. Wakanda faces growing threats and they must fight to protect their nation from intervening world powers in the wake of his death, none more dangerous than Namor and his undersea kingdom of Talokan. As the Wakandans strive to embrace their next chapter, the heroes must band together and forge a new path for the kingdom of Wakanda.

Paul, who is Jewish, is growing up in 1980s New York with his best friend, Johnny, who is Black. After the pair are caught smoking weed, Paul is quickly sent to his older brother’s private school. While there, Paul faces discrimination and bullying and struggles between finding his new place in school and remaining loyal to Johnny. As Paul makes his way in Armageddon Time, his parents and grandfather try to teach him about the strength of family connection and the generational pursuit of the American dream.

In the gripping biographical drama She Said, New York Times reporters Megan Twohey and Jodi Kantor break one of the most important stories in a generation — a story that helped launch the #MeToo movement and shattered decades of silence around the subject of sexual assault in Hollywood. As they strive to get to the truth, they’re met with the challenge of trying to get past the wall of fear and intimidation that the most powerful men in Hollywood have erected to protect their most heinous crimes.

In The Menu, foodie Tyler and his less enthusiastic girlfriend, Margot, travel to a coastal island to eat at an exclusive, invite-only restaurant where the renowned Chef Slowik has prepared a lavish menu. However, they soon discover that there is a darker mystery to the restaurant and a reason that it’s invite-only. If they don’t get to the bottom of the conspiracy in the black comedy, they may be the next item on the menu–along with their fellow guests.

The action-packed family adventure Strange World introduces the Clades, a legendary family of explorers. Adventure awaits as they attempt to navigate an uncharted, treacherous land alongside a motley crew that includes a mischievous blob, a three-legged dog, and a slew of ravenous creatures. Searcher Clade is a family man who finds himself out of his element on an unpredictable mission. Jaeger is Searcher’s larger-than-life explorer father. Ethan is Searcher’s 16-year-old son who craves adventure. Meridian Clade is an accomplished pilot and Searcher’s partner in all things. And Callisto Mal is the fearless leader who spearheads the exploration into the strange world.

Benoit Blanc returns to peel back the layers in Glass Onion: A Knives Out Mystery. This fresh adventure finds the intrepid detective at a lavish private estate on a Greek island, but how and why he comes to be there is only the first of many puzzles. Blanc soon meets a distinctly disparate group of friends gathering at the invitation of billionaire Miles Bron for their yearly reunion. Among those on the guest list are Miles’ former business partner Andi Brand, current Connecticut governor Claire Debella, cutting-edge scientist Lionel Toussaint, fashion designer and former model Birdie Jay and her conscientious assistant Peg, and influencer Duke Cody and his sidekick girlfriend Whiskey. As in all the best murder mysteries, each character harbors their own secrets, lies and motivations. When someone turns up dead, everyone is a suspect.

Devotion, an aerial war epic based on the bestselling book by Adam Makos, tells the harrowing true story of two elite U.S. Navy fighter pilots, Jesse Brown and Tom Hudner. The two battled together in the skies throughout the Korean War, facing down dangers and putting themselves in harm’s way in order to serve their country. Their heroic sacrifices would ultimately make them the Navy’s most celebrated wingmen, still honored today.

In The Fabelmans, a semi-autobiographical movie about Steven Spielberg’s childhood, young Sammy Fabelman is growing up in post-WWII Arizona. His childhood is typical and happy until he learns the truth about a family secret that shatters him. Sammy turns to the power of movies and discovers how film can help us both escape and find the truth in life.

Bones and All is a poignant and strange story of first love between Maren, a young woman learning how to survive on the margins of society, and Lee, an intense and disenfranchised drifter. As they meet, they quickly fall for each other and embark on a thousand-mile odyssey that takes them through the back roads, hidden passages, and the trap doors of Ronald Reagan’s America. But despite their best efforts, all roads lead back to their terrifying pasts and to a final stand that will determine whether their love can survive their otherness.