We love horror movies for their jump scares that make our heart rates spike, for their stomach-churning moments that we cover our eyes during – though we can’t help but peek through our fingers to watch. We love their monsters that haunt our nightmares, be it a guy in a mask or a grotesque creature that defies the laws of nature. We love cheering for the final survivor as they get the upper hand against their tormenter and avenge their lost ones, defeating evil once and for all – at least until it’s time for the sequel. We keep coming back to our favorite horror movies time and time again, but a fresh, subversive take on the genre is enough to leave audiences stunned speechless, questioning what a horror movie really can be, and hungrily craving more.

Enter Jordan Peele. To which the world collectively thought: Jordan Peele making a horror movie? The comedian Jordan Peele, from sketch series Mad TV and Key & Peele? Yes, that Jordan Peele. The director and writer has received unending praise for his innovative social horrors – Get Out (2017) and Us (2019), with the former earning him an Academy Award for Best Original Screenplay, on top of being cited as the best screenplay of the 21st century by the Writer’s Guild of America. With such praise, it’s no surprise that the anticipation for his newest work, Nope (2022), with a story kept heavily under wraps, is through the roof. But what is it about Peele’s work that continues to give audiences both those heart-racing monster fights that we know and love, while leaving us shocked to our core?

Peele hasn’t earned awards for his screenplays for both Get Out and Us for nothing. It’s rare to see horror films represented among the list of Oscar winners, and in fact, Get Out is the only horror film to have won the award for Original Screenplay, with only two other films taking home Adapted Screenplay: The Exorcist (1973) and The Silence of the Lambs (1991). Though, Peele’s dialogue is so clever and well-crafted that you can’t fully appreciate just how genius it is until the twists are revealed and all the cards are shown. As the patriarch of the Armitage family, Dean, shows Chris around the house and introduces him to the housekeeper Georgina, he casually mentions that his deceased “mother loved her kitchens, so we keep a piece of her in here.” Only later is it revealed that Dean’s mother was quite literally present in the kitchen, as her mind had been surgically placed in Georgina’s body. Later, when Chris confronts Georgina, she assures him that the Armitages “treat [them] like family” – quite literally too, since the groundskeeper Walter is actually the mind of Dean’s father, placed in Walter’s body.

But a screenplay is more than dialogue. Perhaps the most jaw-dropping scene in the film is a silent auction, disguised as a quiet game of bingo on the surface, in which it is slowly revealed that the only item up for auction is not an item at all, but Chris’s body, to be treated similarly to that of Georgina and Walter. Throughout the script, Peele sprinkles in little details to clue both the audience and the main character in on what’s going on beneath the charming surface. But it’s up to them to be able to put the pieces together and solve the mystery. It’s safe to say that we can expect another stroke of clever genius with Nope, so be sure to pay attention to every little bit of dialogue. See it twice to make sure you catch all the hidden details!

Nothing Is What It Seems

Exciting, unsuspected twists are a common element in horror movies. The audience is led to believe one thing, only for the most unsuspecting detail to be revealed at the end of the film. It’s a classic Scooby-Doo unmasking of the villain. The monster was not actually the Creeper, but it was Old Man Carswell all along! Only, most movies are a bit darker than your average Scooby-Doo cartoon. What Jordan Peele does, is he creates a false sense of security in creating comforting characters that we might even root for at moments in the film, applauding their efforts, only for them to end up being the real villain. With Get Out, the middle-class Armitage family seems warm and welcoming on the surface, but when their true intentions come to light, they are revealed to be anything but. Even Rose, who fights on Chris’s behalf against a nosy police officer at the beginning of the film, is nothing more than a purely evil woman who tricks Black men and women into dating her, only to mount their photos on the wall like hunting prizes once her family has succeeded in capturing them.

The twist in Us is arguably even more shocking. The hero Adelaide fights her genetic clone, Red – a failed experiment created by the government to be able to control its citizens – and successfully gets the upper hand, killing Red and escaping with her family. In the film’s final moments, we realize we should have been rooting for Red all along, as the “Adelaide” that we have come to know is really the Tethered clone, having switched places with the real Adelaide – later known as Red – as a child. Going back to Jordan Peele’s masterful screenwriting, it’s a twist that was planted early on: none of the Tethered, except for Red, can speak, and a young Adelaide returns from her encounter with her doppelgänger in the funhouse unable to speak for years. Be prepared to expect the unexpected this time around at the theaters, as Nope’s twists will surely leave us just as gobsmacked.

One thing that Jordan Peele’s films have never lacked is an attention to detail. Everything is deliberate, all the way from the dialogue down to the costumes and props. Everything is on purpose, and nothing is on accident. In Get Out, a striking, though subtle detail is the emphasis on color throughout the film, particularly in the colors of blue and red. Classic, all-American colors that bring groups together, while also serving as a divide. Chris is seen exclusively in connection to blue, whether he is wearing blue or bathed in blue lighting. At the beginning, Rose also wears blue, though she drives a red car – revealing her true colors and where her loyalties lie. The most prominent use of this dichotomy of color can be seen during the Armitage’s party, in which every white guest has a hint of red in their attire. Even Rose has switched out her blue shirt for a red and white striped one, showcasing that she no longer must play the role of Chris’s caring girlfriend. The only ones at the party that wear blue are Chris, and less noticeably, Andre – who wears a blue stripe around his hat – and is really Logan’s mind inside Andre’s body.

In Us, the most significant symbolism is the 1986 charity event Hands Across America, physically uniting Americans to a single cause of fighting hunger and houselessness. Which sounds great on the surface, only the actual impact of the event ended up being more on spotlighting fame rather than addressing real problems. Us highlights the event early on with advertisements of red chains of people holding hands, an image that is repeated at the end of the film when the Tethered, all wearing red, join hands up on the surface, having successfully taken over their counterparts. With a Jordan Peele film, there really is no such thing as over-analysis, and we can expect similar moments of symbolism in Nope. Our bets are on those colorful, inflatable stick figures, which look pretty suspicious to us.

Time and time again, what ultimately sets Jordan Peele apart from all other horror filmmakers though is that he creates much more than just monster and slasher movies. Don’t get us wrong, we love a good slasher movie as much as the next fan, but there is always something about a Jordan Peele film that will leave you sitting in your reclining chair at the movie theater pondering not only every beat of the movie, but every aspect of society. Those are the kinds of thoughts and discussions you might have after a tear-jerking drama, never a horror movie. It’s impossible to watch Get Out and Us and ignore the social commentary that Peele is thoughtfully making, because the central horror of the film is so closely tied to these messages. Whether it’s reflections of racism against Blacks in modern America or discussing the marginalization of social classes in society and the privileges that some have, these are the real horrors that Peele presents his audience with.

In preparation for Nope, Jordan Peele has noted that his new film dives into the idea of spectacle and the capitalization of such, as OJ and Emerald Haywood try to capture the spectacle of a UFO sighting. The question will be: is there such a thing as too much spectacle? We love spectacle and crave it – movies themselves are a spectacle that we thoroughly enjoy – but at the same time, we are so accustomed to spectacles of all different kinds – beautiful spectacles as well as horrific ones – that we turn our heads and look away from them, unimpressed and uncaring.

Nope will take a step into new waters for Jordan Peele, moving from a strictly horror film to incorporating both science fiction and horror elements. While the story has been mostly kept under wraps, it’s known that there is a strong focus on UFOs – even leading to speculations by horror fans that the title was an acronym for Not Of Planet Earth. Cheeky, but Peele confirmed that the title is more what he anticipates the audience will be shouting at the screen during the film’s biggest moments. In the same way we shouted, “get out” at Chris, we’ll be shaking our heads saying “nope” when the camera pans up to the clouds in the sky.

But this isn’t Peele’s first go at the science fiction genre. From 2019 to 2020, he both produced and served as the narrator for a reboot of Rod Serling’s The Twilight Zone, perhaps one of the most well-known science fiction franchises. Peele also wrote some of the most well-received episodes of the rebooted series, one of which was inspired by the famed “Nightmare at 20,000 Feet” episode from the original show, starring William Shatner. The Twilight Zone is also known for its surprising twists and revelations, commentating on different aspects of society, so it’s no surprise that Peele would be attracted to the series, as well as the science fiction genre. Just as Jordan Peele revitalized the horror genre, pushing its boundaries to question what exactly horror can be, he is sure to provide a fresh take on science fiction classics, bending the genre in ways that will have us on the edge of our seats, questioning everything we once knew about our world and worlds beyond, and coming back again and again.

Say “yep” and get tickets to see Nope, exclusively in theaters on July 22. 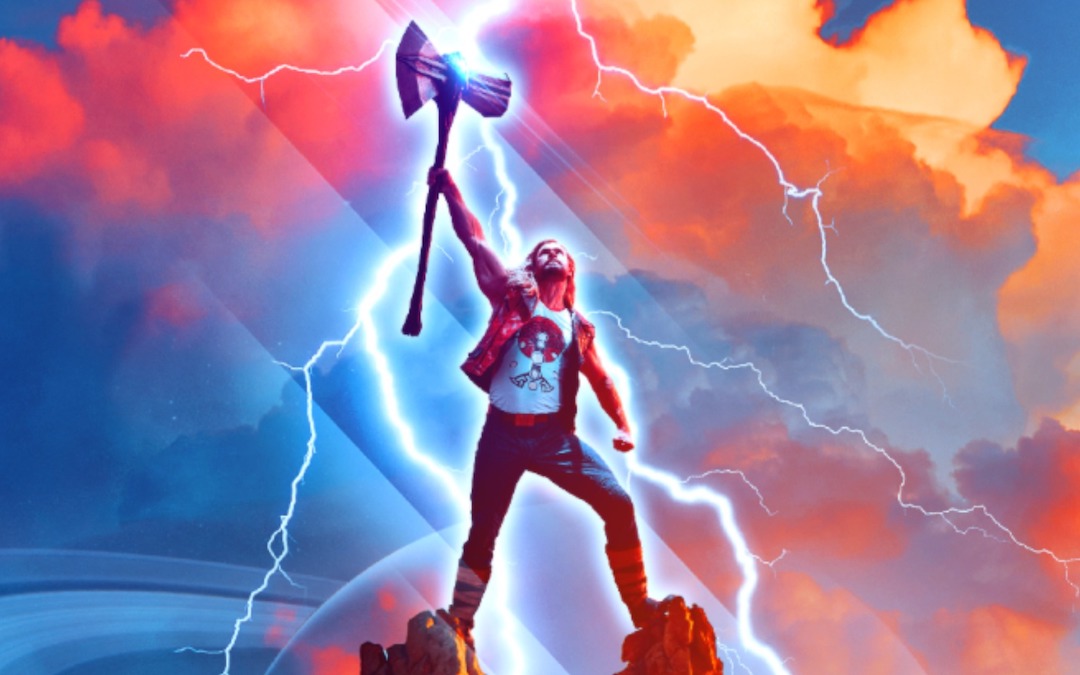