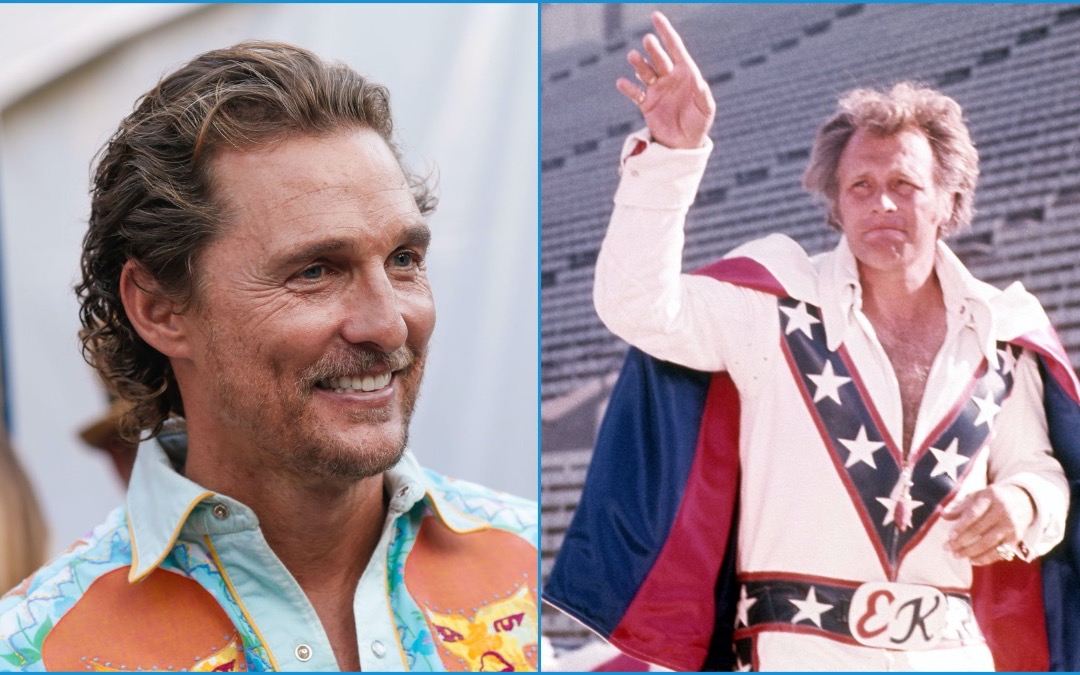 In his almost 30 years in Hollywood, Matthew McConaughey has done it all, from playing iconic slacker Wooderson in Dazed and Confused to winning an Oscar for Dallas Buyers Club. He’s done fizzy rom-coms, prestige dramas, weird indies and acclaimed television.

Still, he recently revealed one person he’s been dying to portray and so far hasn’t been able to: Evel Knievel.

The actor was on SiriusXM and explained that in his long career, he’s always wanted to play the motorcycle daredevil but thus far hasn’t been able to get the right script together.

“I’ve dabbled and been around Evel Knievel story for a while. We haven’t ever been able to get the script right,” explained the actor. “But that was the original daredevil. Everything X Games goes back to that guy and the stuff that he was doing. The interesting thing about him, people thought he was wanting to die. No, he was the opposite. He wanted to live so hard … talk about creating resistance, that guy created resistance in his life, just to feel.”

McConaughey’s fascination with the world-famous stuntman was so strong that it actually led to the pair becoming real-life friends before Knievel’s passing in 2007. That friendship gave McConaughey even further insight into the mind of the man he respected:

“He was actually happier when he was on a bike about to make a jump that he 95% probably wasn’t going to make, he was happier then, than in the times in between jumps. It was, like, the only place he felt actually alive was before he was actually going to make the jump. I don’t know if I’ll ever do that one, but that’s something I’ve been circling for 20 years and I became good friends with him when he was alive.”

A few projects have been made in the past about Knievel’s life, a 1971 movie starring George Hamilton and a made-for-TV movie in 2004. But neither of those are on the scale of the award-worthy biopic McConaughey is likely envisioning.

If he could finally crack the code on the script, however, Knievel’s story is a good one to tell. Over the course of his career, Evel Knievel attempted over 75 public motorcycle jumps that drew crowds in the tens of thousands, if not more. He set multiple world records, including holding the record for jumping the most stacked cars on a Harley-Davidson XR-750 for an impressive 35 years.

Unfortunately, his fearless streak also earned the daredevil a record number of injuries, as well. Over the course of his career, Knievel was rumored to have had over 400 bone fractures from the result of dozens of crashes, some near-fatal. Knievel never let it deter him, his drive to attain greater heights undaunted. Like McConaughey, there was one performance he never got to achieve: jumping the Grand Canyon – though it wasn’t for fear of trying, but simply because the U.S. government wouldn’t let him.

“I don’t care if they say, ‘Look, kid, you’re going to drive that thing off the edge of the Canyon and die,’ I’m going to do it,” he explained in a 1968 interview. “I want to be the first. If they’d let me go to the moon, I’d crawl all the way to Cape Kennedy just to do it. I’d like to go to the moon, but I don’t want to be the second man to go there.”

Knievel may never have achieved his dream challenge, but McConaughey will hopefully one day get to with the Evel Knievel movie he’s always wanted to make.