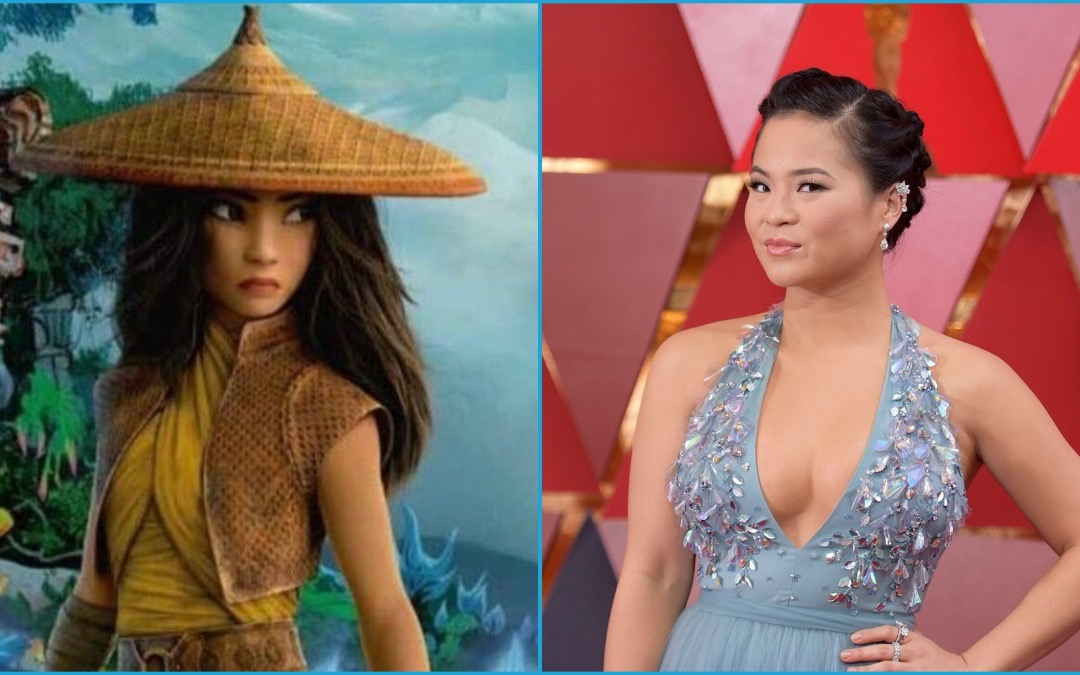 As with virtually every movie in some form production and post-production in the last half-year, Disney’s upcoming animated film Raya and the Last Dragon has had its timeline rewritten. Just as production was ramping up, the coronavirus hit and the team scrambled to become the first Disney Animation team to try to piece a film together from all over the world via Zoom calls and using home setups. The result is that the film, originally scheduled to be released this Thanksgiving weekend, the film has now been pushed to March 12, 2021.

But that delay may have been a blessing in disguise. EW had the news that Star Wars actress, Kelly Marie Tran, has now been cast to voice the role of warrior Raya. She replaces Cassie Steele, who was announced as the voice of Raya during the movie’s brief panel at last year’s D23 event. No reason was given for the recast, but, with the utmost respect for the talented Steele, Tran is an upgrade from a marketing standpoint. After the vicious backlash she received from less enlightened corners of the internet for her portrayal of the plucky, earnest Rose Tico in Star Wars: The Last Jedi, fans have rallied around Tran as an actress and she’s quickly become a fan favorite. It was also previously announced at D23 that Awkwafina will be voicing the role of Sisu, a dragon trapped in human form who needs Raya’s help to regain her power and dragon form.

“As filmmakers, Don and Carlos bring a combination of animation know-how and emotional storytelling to Raya and the Last Dragon, bringing our fantasy adventure to surprising, original, and dynamic heights. They both saw the potential for this film and had a strong vision for the story, especially for our lead character, played by the wonderfully talented Kelly Marie Tran. And no small feat, directors Don and Carlos, writers Qui and Adele, and the entire crew of 400 Disney Animation artists are making this film together, while separated and working from home.”

Despite those challenges, says Hall, the teams rallied under tough circumstances to create “the most beautiful film [he’s] ever seen.” It certainly appears that way from the first look EW shared of the first fully rendered image of the film featuring Raya and her trusty steed and sidekick, Tuk Tuk.

That’s important, not simply for the success of the production, but because Raya is also a first for Disney Animation in other, more significant ways. It’s the first movie inspired by Southeast Asia and its culture and the team traveled to  Laos, Cambodia, Thailand, Vietnam, and Indonesia for research. To confirm its accuracy and to ensure the project remained true to and respectful of various cultures, the Disney Animation team worked with a Southeast Asia Story Trust. They also worked in collaboration with a visual anthropologist who signs off on every design before they’re finalized, and they employed linguists, dancers, and Gamelan musicians from Indonesia. Just as important, Tran is the first Southeast Asian actress to lead a Disney movie; her parents were refugees from Vietnam who fled to the United States after the Vietnam War.

To get the role, Tran had to go through an audition process with others, and López Estrada said Tran had the role in the bag from her very first recording session. “I’m never going to forget it,” he told EW. “I think [Don and I] rode in the car together, and we were quiet, looking at each other and nodding our heads just being like, ‘Yep, yep, yep. Kelly’s perfect.”

Hall concurred. “She is Raya — just her buoyancy and her positivity, but yet there’s a strength as well to Kelly and the character,” he added.

Both directors noted that Tran’s comedy and ad-lib skills, honed at various improv schools, were exceptional, but it was the depth of emotion she brought that won them over. In fact, López Estrada recalled that what Tran did in her recording session audition impressed them so much, they actually changed a scene to fit her performance instead of it being the other way around as it so often is in animation:

“We had this little dramatic moment; it was written as a few lines. And I remember her going, ‘Hey, I have some ideas because this is normally how I would say this or I have some questions. Do you mind if I tried it a little bit differently?’ She went for it, improvised for a minute, and had us all in tears. We changed the scene and reblocked the animation so that it would follow what Kelly did that day because she just clicked on something that was so much bigger than anything we had imagined.”

For her part, Tran is incredibly thrilled to be voicing such a dynamic, groundbreaking character for Disney. While Disney princesses have thankfully evolved past being just prince-bait damsels-in-distress, Raya is yet an entirely new take on the concept of a Disney princess. As the daughter of a chief, Raya was taught to be a skilled combatant and the movie will feature plenty of action from the tribe’s warrior-princess, says Tran:

“She is someone who is technically a princess but I think that what’s really cool about this project, about this character, specifically is that everyone’s trying to flip the narrative on what it means to be a princess. Raya is totally a warrior. When she was a kid, she was excited to get her sword. And she grows up to be a really badass, gritty warrior and can really take care of herself.”

Nguyen spoke about how important it is to properly celebrate the culture specifically of Southeast Asia, which is its own cultural diaspora.

“To be able to have some [heroes] that look like me and my kids,” he said, “it’s gonna matter to a lot of folks.”

Add Raya and the Last Dragon to Your Watchlist for updates.