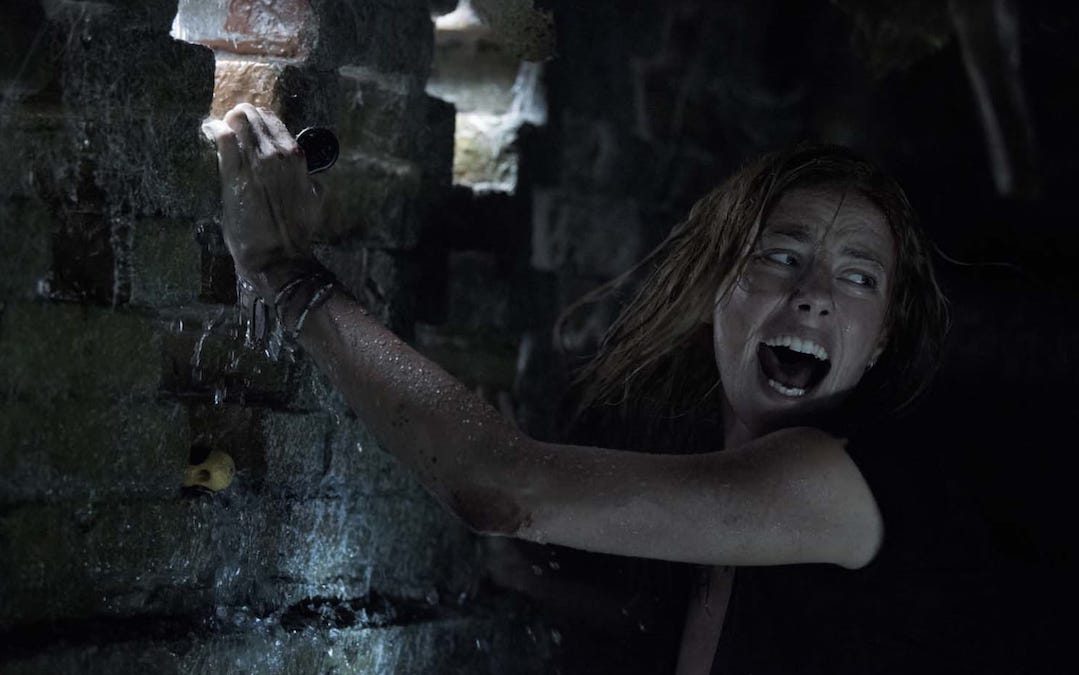 In Theaters This Weekend: ‘Crawl’ And ‘Stuber’

Each week on Atom Insider, we’re giving you the heads up on the biggest and most talked about films arriving in theaters. With summer still in full swing, we’re looking at a high-tension scare-fest, but also an R-rated buddy comedy with some funny, familiar actors.

In a summer full of reboots, sequels, and cinematic universes, it’s refreshing to see a creature feature like Crawl potentially making a splash at theaters. The premise is simply chilling. During a Category 5 hurricane in Florida, a young woman (Kaya Scodelario) has to help her injured father (Barry Pepper) escape the crawlspace of their home before it floods. But alligators have made their way into the flooded town, and they’re hunting the family one by one.

Paramount’s Crawl was directed by Alexandre Aja (The Hills Have Eyes, Piranha 3D, Horns) with a screenplay by Michael Rasmussen & Shawn Rasmussen, and it was co-produced by Sam Raimi. The cast includes Ross Anderson, Anson Boon, George Somner, and Ami Metcalf.

Both Kumail Nanjiani and Dave Bautista have been rising Hollywood stars over the last few years. Bautista transitioned from the WWE into becoming a “guardian of the galaxy,” and Nanjiani went from HBO’s Silicon Valley to being the lead of his own personal story in the hit comedy The Big Sick. In Stuber, Nanjiani is once again an Uber driver (like in Bick Sick), but his latest rideshare (Bautista) is a gung-ho cop who forces him to tag along on an action-packed adventure through the criminal underworld, even though all he wants is a five-star rating.

Check your local listings to catch the latest indie fare coming to select theaters. The Farewell (A24) from director Lulu Wang stars Awkwafina in one of my personal favorite films of the year about a family dealing with the looming death of a loved one. And The Art of Self Defense (Bleecker Street) stars Jesse Eisenberg as a budding martial arts enthusiast who wants to discover his own inner (toxic) masculinity.

Stay tuned next week for our recap of how these films fared at the box office. To get tickets to these movies and more, hit the button below.

Meanwhile, if you missed the last few weeks, allow us to catch you up…

Home Is Where The Doll Is

Annabelle Comes Home is the third film in the “Annabelle trilogy,” but it could also be compared to Captain America: Civil War in the way it unites a lot of characters from around the Conjuring universe into one, bombastic horror film. The first two Anabelle movies dove deep into what specifically caused the doll to become cursed, but Anabelle Comes Home explores how the doll is also a beacon that can wake other demons up, specifically in the famed artifact room of demonologists Ed and Lorraine Warren (played by Patrick Wilson and Vera Farmiga).

This is the directorial debut of Gary Dauberman, who also wrote the film and has been writing a lot of Conjuring universe films since the first Annabelle in 2014, as well as It and the upcoming It Chapter Two. The cast includes Mckenna Grace, Madison Iseman, and Katie Sarife.

All You Need Is A Love Story

What if everyone in the world forgot that the Beatles ever existed? Not only that, but their records have mysteriously vanished, and not a single trace of their musical careers still exists. As a troubled singer/songwriter who can’t make his own success story happen, Himesh Patel plays Jack Malik, seemingly the only person who can put the lyrics together and pass the legendary music off as his own. But his imposter syndrome threatens to ruin the one genuine relationship he had with his childhood best friend, Ellie, played by Lily James.

Directed by Danny Boyle (Trainspotting, 28 Days Later, Slumdog Millionaire, 127 Hours, Steve Jobs) and written by Richard Curtis (Notting Hill, Bridget Jones’s Diary, Love Actually, About Time), Yesterday is a jukebox musical dramedy that is sure to strike a chord with audiences. The cast includes Ed Sheeran (as himself), Kate McKinnon, James Corden (as himself), and Lamorne Morris.

Alex Holmes’s sailboat racing documentary Maiden (Sony Pictures Classics), which centers around the real story of Tracy Edwards, hits select theaters this weekend. Plus, Daisy Ridley and Naomi Watts star in Ophelia (IFC Films), a new Hamlet-inspired film directed by Claire McCarthy and based on the novel of the same name by Lisa Klein.

FOR THE WEEKEND OF JUNE 21

The Toys Are Back In Town

In 2010, the Toy Story trilogy wrapped up in just about the best way possible. Critics loved Toy Story 3, and so did audiences, as the film went on to become one of the highest-grossing Pixar movies of all time. So the announcement of Toy Story 4 naturally raised a few eyebrows.

Why make another one of these movies when the trilogy already ended so well? Turns out, Pixar still has some tricks up its sleeve with this franchise, as critics are already raving about Toy Story 4 becoming yet another instant favorite from the Emeryville-based studio.

The movie, directed by Josh Cooley (writer of Inside Out), continues the story of Woody and the gang as they help their new owner, Bonnie, cope with the pressures of kindergarten. Along the way, they have to protect the confused and befuddled “Forky,” a new favorite toy Bonnie “made” in class. But Forky has no intention of leaving where he thinks he truly belongs: the trash.

The Child’s Play movies, starting with the first one in 1988, have always been true to the “play” aspect of their title. Yes, they’re horror films, through and through, but there’s always been an inherent silliness to these movies about a “Chucky” doll that has been possessed by a serial killer.

Though apparently similar to the original in tone, the 2019 Child’s Play reboot from Orion Pictures features an updated “killer doll” as a more high-tech version named “Buddi,” voiced by Mark Hamill, who suddenly becomes self-aware and capable of turning the A.I. technology of the “smart home” into a weapon.

The film was directed by Lars Klevberg (Polaroid) with a screenplay by Tyler Burton Smith, based on characters created by Don Mancini. The cast includes Aubrey Plaza, Brian Tyree Henry, and Gabriel Bateman.

‘Anna’ And The Assassination

French director Luc Besson didn’t exactly win the box office summer two years ago with Valerian and the City of a Thousand Planets, but his new thriller, Anna, appears to be borrowed in spirit from Atomic Blonde, another 2017 summer action film. In this movie about government assassins, newcomer Sasha Luss plays the titular role as a woman whose incredible beauty also matches her incredible combat prowess.

In addition to directing, Luc Besson wrote the film, which is being released by EuropaCorp. The cast includes Luke Evans, Cillian Murphy, and Helen Mirren. With music by Éric Serra.

If you’re looking for something a little more low key this weekend, be sure to keep an eye out for Wild Rose, a new music drama coming from Neon. This is the latest film directed by Tom Harper (War Book), and it stars Jessie Buckley (Beast) and the legendary Julie Walters. It has been quietly flying under the radar, but the buzz it has gotten has been overwhelmingly positive.

To see everything that’s hit theaters so far this year, click here.