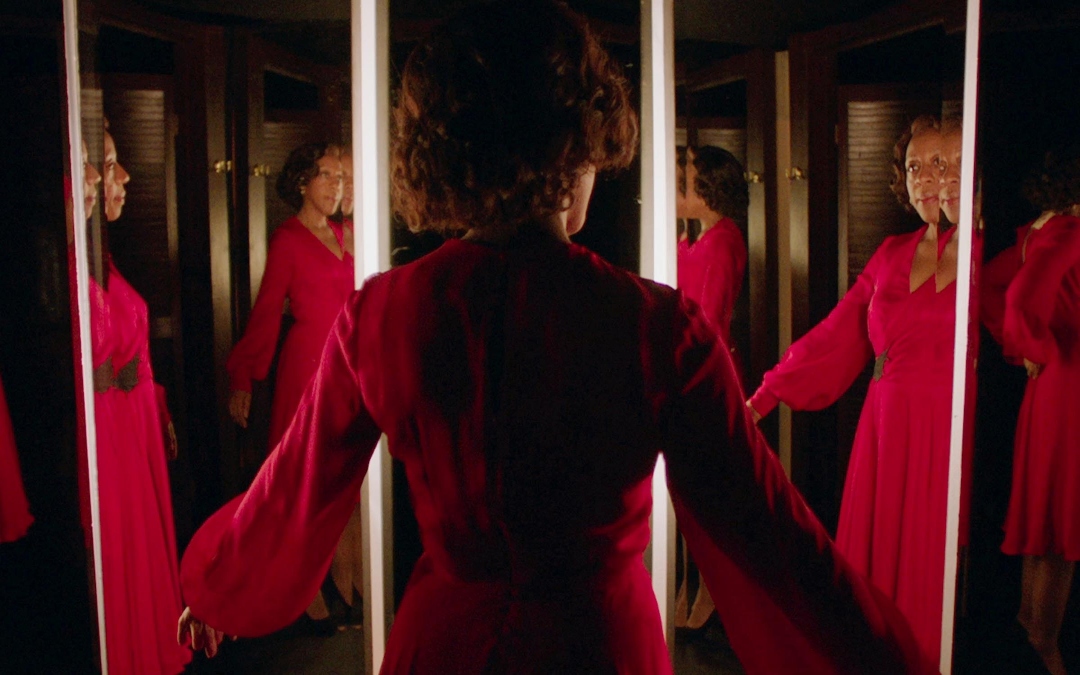 ‘In Fabric’ Review: Three Reasons To See It

In the pantheon of killer inanimate object cinema (Bed Of The Dead/Rubber/Killer Sofa), Peter Strickland’s In Fabric is a sensually riveting standout, as form-fitting to horror’s salacious allure as it is deranged. Hinted by the film’s title, you’re in store for murderous dress weirdness in the form of a silky, femme fatale red number sized 36. Strickland’s European stylization weaves incomprehensible madness and striking beauty into a cross-stitch of technicolor terrorization punctuated with the imagery of the flowing gown poised to strike. It’s lucid lunacy, but a bloody brilliant watch.

In Fabric takes place during the height of winter sale season. Sheila (Marianne Jean-Baptiste), while shopping for a date-night stunner, stumbles upon a gorgeous dinner dress. Last one in stock, too. How lucky! After her companion fails to impress, Sheila removes the elegant garb only to find a blistering rash upon her chest. An allergic reaction, perhaps? If only Sheila were that lucky. When this specific dress finds a host, it tethers itself and thirsts for blood. The only return policy to be found here…is DEATH! (Does that even work? Screw it.)

A24 has been keeping In Fabric stashed away, choosing to rack up festival appearances versus a hasty opening, but will finally release Strickland’s newest later this year. Here are three reasons to say yes to this killer dress when it hits the proverbial runway!

1. The Pleasures Of Increasing Insanity

Between The Duke Of Burgundy, Berberian Sound Studio, and now In Fabric, Peter Strickland has cemented himself as one of this generation’s leading absurdist auteurs. In Fabric is a dangerous fashion noir; its unconventional narrative structure bleeds increasing paranoia as an agent of cinematic chaos. Sheila’s story is just an introduction to Strickland’s wardrobe strangler, as structure morphs in unexpected ways. Such storytelling will surely strike a divide between audiences with those searching for linear narration versus us who revel in architectural anarchy, but Strickland’s commitment is what sets him apart from messier visionaries.

In Fabric cleans, presses, and irons out its concept starch-flat. At first, physical marks appear on skin and washing machines daring to encase the dress spin out of control. Then, Strickland allows the dress to gain mobility. Sliding under doorway gaps or slinking up walls. There’s such haunting majesty as Sheila’s dress – yes, just a dress – perches above Gwendoline Christie while her eyes are closed during sex, opening only in time to witness the garb plunge downward from the ceiling. It’s all so daffy, but Strickland ensures tonality remains serious as a runway model. Your senses unspool, rendered paralyzed by cadaver chic filmmaking. It’s anti-mainstream moviegoer porn, and loves flaunting exhibitionism as much as it loves delving into the insanity of the visuals.

Listen. I rarely use the term “sexy” to describe cinema, but by Versace’s ghost, is In Fabric drop dead sexy (literally, heh), as viscously vile as it is breathtaking. Strickland’s framing of the ghostly dress as it hovers above a staircase, fluttering in slow motion, is centerfold material. Cinematographer Ari Wegner peers around Hitchcockian angles and delivers optical seduction for an otherwise batshit “looks that kill” monster movie. Cavern Of Anti-Matter’s score plucks an Argento-esque tune, jumping with the vibrancy of piercing string instruments. Red colorization deepens, overtakes the screen, and ripens like juicy fruit. In Fabric is the sum of synergistic talents that promote old-world filmmaking captured with new-world clarity, spun together by Strickland’s soft and heated touch.

What sets Mr. Strickland apart is his ability to beautify the disturbing and disgusting. A movie that includes “Mannequin Pubic Hair” as a credited line may be one of the year’s most satisfying artistic expressions, even knowing how said mannequin further shocks audiences. Not to be crude, but Strickland turns, er, bodily fluids into performance art you’d find on a video loop at the Louvre. English department stores resemble cultish congregations, stag parties portraited as primal Renessaince era murals, and symmetry regulates the unordinary. In Fabric takes the preposterous, gives it a 5-star makeover, and voila: intense visuals of the utmost refinement.

Strickland’s signature brushstrokes only sell a movie so far. To execute the unthinkable, you need a cast of characters who can coax audiences like a big, hunkin’ tuna to a wriggly lure. Someone like Marianne Jean-Baptiste, whose desperation and loneliness as Sheila attract the attention of a dress intending to slay. Or Leo Bill as Reg Speaks, a laundry machine repairman who can lull listeners into a trance with his reciting of mechanical issues. We have to believe a dress can stalk prey, corrupt minds, and become a tangible horror movie villain – and, thankfully, equally outlandish performances ensure this scenario.

Even bit parts accentuate the odd. Julian Barratt and Steve Oram collaborate as Sheila’s bosses, chipperly jabbering on about her handshake quality as if it’s a fireable offense (offering to roleplay with costumes as practice). Fatma Mohamed plays a clothing saleswoman who speaks in cryptics, performs ritualistic headbanging motions in private, and promotes the mysteries of televised shop commercials swirling with subliminal hypnosis. At one point, the camera cuts to Richard Bremmer’s aged store manager, his legs wrapped around a presumably shoplifting elderly customer in a wrestling takedown – hence the divine unpredictability of In Fabric. Brilliantly delusional ’70s and ’80s giallo inspiration crafted from only the finest materials and possessed features. A dashingly dreadful fit for the swankiest satanic dinner party imaginable.

In Fabric is in theaters on December 6th. Get tickets here.