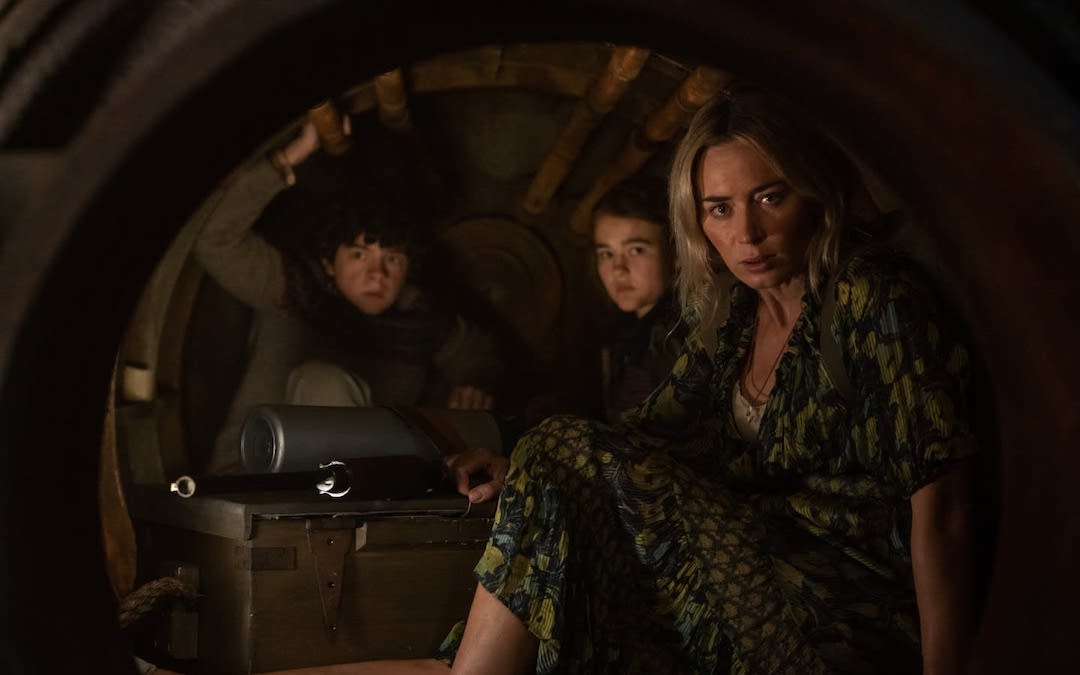 It’s March already?! Who let time fly by this fast?

March is a weird month for horror, historically speaking. Usually, horror gets dropped in so-called “dump months,” months when box office numbers don’t do so well so they turn to genre fare to make a few extra bucks. Specifically, these are January, February, August, and sometimes September. You’ll notice they come after either the holidays, when families can go to the movies together, or after summer vacation when, y’know…families can go to the movies together. Hence, March is a bit odd because there are bigger movies, like Mulan and Pixar’s Onward, slowly starting to get their releases and they’re taking the slots previously filled by genre fare.

So what does March have to offer those who delight in dread? Glad you asked! This month sees the release of a long-awaited horror satire, an undead superhero, a silent sequel, and more.

Official Synopsis: The American Dream becomes a nightmare for a group of undocumented day laborers hired by a wealthy couple (played by Lynn Collins and James Tupper). What they hope to be their biggest payday turns into a terrifying fight for survival at the couple’s secluded mansion, and those thought to be helpless must prove they can’t be discarded so easily.

Why You Should Check It Out: Whenever anyone says that horror is great because it never gets political, my eyes roll so far into the back of my head that I can see down my esophagus. Films like Beneath Us are here to prove that not only is this historically untrue, the genre is still ready and willing to face these kinds of discussions head on. So if you’ve ever heard someone – a friend, a family member, a colleague, etc… – talk disparagingly about it, here’s a horror film to educate them.

Subgenre: “Why Can’t We All Just Get Along?”

Official Synopsis: Twelve strangers wake up in a clearing. They don’t know where they are, or how they got there. They don’t know they’ve been chosen… for a very specific purpose … The Hunt. In the shadow of a dark internet conspiracy theory, a group of elites gathers for the very first time at a remote Manor House to hunt humans for sport. But the elites’ master plan is about to be derailed because one of the hunted, Crystal (Betty Gilpin, GLOW), knows The Hunters’ game better than they do. She turns the tables on the killers, picking them off, one by one, as she makes her way toward the mysterious woman (two-time Oscar® winner Hilary Swank) at the center of it all.

Why You Should Check It Out: The amount of controversy surrounding this film is nothing short of fascinating. Originally slated to be released last September, the film was pulled after two events: the shootings at Dayton and El Paso and the subsequent criticism from none other than Donald Trump himself. Now, six months later, the satirical take on Richard Connell’s The Most Dangerous Game is finally getting a release and the consensus is that it’s a f*cking blast! We may not have Jason but let’s still celebrate Friday the 13th with Blumhouse and their brand of wildly entertaining horror.

Subgenre: “If At First You Don’t Succeed, Try Try Again!”

Official Synopsis: Based on the bestselling comic book, Vin Diesel stars as Ray Garrison, a soldier recently killed in action and brought back to life as the superhero Bloodshot by the RST corporation. With an army of nanotechnology in his veins, he’s an unstoppable force –stronger than ever and able to heal instantly. But in controlling his body, the company has sway over his mind and memories, too. Now, Ray doesn’t know what’s real and what’s not – but he’s on a mission to find out.

Why You Should Check It Out: Vin Diesel is one of those guys who embraces his love of genre fare without a single iota of shame. Yes, he may be known best for the Fast and Furious franchise but let’s not forget his turns in the Riddick films, his fantasy/action vehicle The Last Witch Hunter, or his voicework in the Guardians of the Galaxy films as well as The Iron Giant. Now Diesel is back in the world of superheroes but this time he’s a little…dead.

Now, some may try and say that this film isn’t “horror” but I’d love to know what else to call a movie about a resurrected soldier who can get blown to smithereens and pull himself back together just in time to administer a can of glorious whoop ass. Brimming with stylish gore and explosive action, Bloodshot will almost certainly stand alongside Brightburn and (hopefully) New Mutants as proof that horror comic book adaptations can work.

Subgenre: “This Time, The Quiet Is Real”

Official Synopsis: Following the deadly events at home, the Abbott family (Emily Blunt, Millicent Simmonds, Noah Jupe) must now face the terrors of the outside world as they continue their fight for survival in silence. Forced to venture into the unknown, they quickly realize that the creatures that hunt by sound are not the only threats that lurk beyond the sand path.

Why You Should Check It Out: 2018’s A Quiet Place was not only a commercial success, it was a damn good movie. Great writing, great direction, and great presentation all combined to offer one of the scariest and anxiety-inducing horror films in recent memory. So, naturally, a sequel was inevitable.

After spending time with the Abbott family on their picturesque farm (y’know, minus the monstrosities roaming the corn fields and all), it’s only natural to want to see what happens next. Turns out there are more survivors and they’re willing to do whatever it takes in order to survive, even if it means letting go of their humanity. After the emotional punch of the first film, it’ll be exciting to see what they have to offer here.

Official Synopsis: A young couple looking for the perfect home find themselves trapped in a mysterious labyrinth-like neighborhood of identical houses.

Why You Should Check It Out: If you want your horror to be a touch more cerebral and surreal, Vivarium is going to be right up your alley. It has that perfect blend of charming, even quirky imagery that hides something sinister beneath its paper-thin veneer. What makes this movie so fascinating is that it’s such a harsh look at what was once the ideal: the nuclear family. For some, that’s the perfect way to live life. For others, and this is specifically what Vivarium is all about, it’s the ultimate nightmare. Jesse Eisenberg and Imogen Poots unfortunately have to live through that phantasmagoria.

Subgenre: “I Guess This Is One Way To Make New Friends”

Official Synopsis: A rare family night for Jay takes a brutal twist when he awakens in a basement with three other prisoners. As their vengeful captor runs riot, Jay engages in a twisted battle to solve the puzzle to his past and save his family’s future.

Why You Should Check It Out: Okay, so let me get this out straight away: I work for the company that’s releasing this film. No, we didn’t have anything to do with making it, we’re just the distributors.

That being said, we’re very proud to bring this UK production to North American shores and we think genre fans are going to have a blast with it. After all, who doesn’t love watching Richard Brake (31, Batman Begins) be super creepy or people in a grimy, grungy basement get tortured? I mean, it’s all in good fun…right?