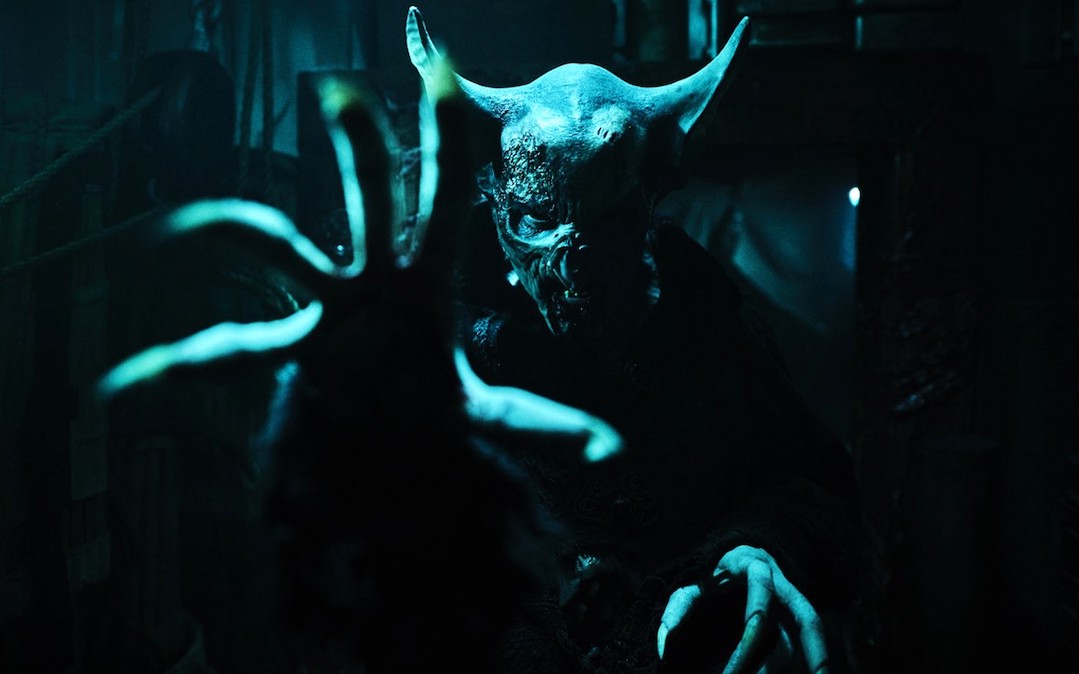 COVID-19 rages on, the quarantining continues, and you damn well better believe that my “Movies I’ve Seen This Year” spreadsheet is growing almost as fast as the social distancing catastrophe that is my hair. With theaters uncertain and drive-ins the closest we’re getting to a theatrical experience, VOD and On Demand are still ruling the landscape in terms of new content. So I’m here to encourage you to watch movies at home or a drive-in. Better to be safe and healthy instead of sorry and, well…viciously ill with potentially life-lasting effects haunting you.

If you want to know what scares you should be looking forward to this month, look no further as I present to you five more delightfully eerie-looking titles.

Subgenre: “Why Can’t Families Just Get Along?”

Official Synopsis: When Edna, the elderly and widowed matriarch of the family, goes missing, her daughter Kay and granddaughter Sam travel to their remote family home to find her. Soon after her return, they start to discover a sinister presence haunting the house and taking control of Edna.

Why You Should Check It Out: Readers, I need to be honest with you: I know absolutely NOTHING about this movie apart from what the synopsis offers. The reason for this is very simple: so many of my colleagues, peers, and friends are speaking so highly of this one that I made the decision to go in blind. But when you’ve got writers from all over the web singing its praises and it’s currently sitting at a stunning 100% on Rotten Tomatoes, you know something special is about to be unleashed. I cannot wait for the 10th and I hope you join me in making this a priority.

Official Synopsis: Five battle-hardened American soldiers are assigned to hold a French Chateau near the end of World War II. Formerly occupied by the Nazi high command, this unexpected respite quickly descends into madness when they encounter a supernatural enemy far more terrifying than anything seen on the battlefield.

Why You Should Check It Out: I’ve said it before and I’ll keep saying it: I love me some period horror films. Ghosts of War seems to tick off all the boxes I could want, including ghosts, a spooky house, the wholesale slaughter of Nazis, mind-fu*kery, and, wait…is that Brenton Thwaites? Man, it’s been a while since I’ve seen him (I know, I know, he’s Dick Grayson in DC’s Titans series, but that ain’t my usual bag). Good to have him back!

Funny enough, this isn’t the only WWII-set horror film on this list. The second one is…

Subgenre: “Even Vampires Aren’t Putting Up With Nazis And Their Shit”

Why You Should Check It Out: I can personally vouch for this one as it’s the upcoming release from my company, The Horror Collective! We were really taken in by this one because it has a fantastic atmosphere, great practical FX, and a killer cast. Plus, vampire horror films seem to have taken a backseat and we wanted to bring them back. So if you’ve been thirsty for some bloodsuckers, look no further than Blood Vessel.

Official Synopsis: Amulet follows Tomaz (Secareanu), a former soldier who is left homeless after an accident and takes refuge in the decaying home of Magda (Juri), a lonely young woman in desperate need of help as she cares for her ailing mother. At first hesitant, Magda soon welcomes Tomaz into their lives. But as he gets closer to and begins to fall for Magda, Tomaz notices strange and unexplainable phenomena. Something seems very wrong with the mysterious old woman who never leaves the top floor, and Tomaz begins to suspect that Magda may in fact be a prisoner to her otherworldly bidding.

Why You Should Check It Out: Some movies take their time, slowly building to an explosive finale that sears the soul and haunts dreams. Amulet is one such movie, an offering that worms its way insidiously into your body, its fingers tracing every nook and cranny of your spine. The debut feature of actress, writer, and now director Romola Garai, we recommend you don’t watch this one alone.

Official Synopsis: Dr. Emma Collins and her team are spending their third summer on the island of Little Happy studying the effect of climate change on the great white sharks who come to the nearby nursery every year to give birth. Along with the last two inhabitants of this former fishing village, their peaceful life is disrupted when a “scientific” team led by her ex-boyfriend and marine biologist Richard show up looking for three bull sharks who we soon learn aren’t just any bull sharks.

Why You Should Check It Out: Look, let’s be realistic here. Is anyone expecting this to be good? No. Literally no one. But should we expect it to at least be fun? Hell yes! I’m 100% ready to devote 99 minutes to watching unlikeable people get chomped to chum, all while still mourning LL Cool J’s parrot, who deserved to have its own spinoff franchise (Hollywood, just call me for more incredible ideas that you’re clearly overlooking).

This is pure popcorn fare. And, to be completely honest and serious with you all, sometimes that’s exactly what we need. Turn off the lights, turn off your brains, and just escape reality for a little while with something lighthearted, fun, and absurd. I know that’s how I’m going to approach this one.