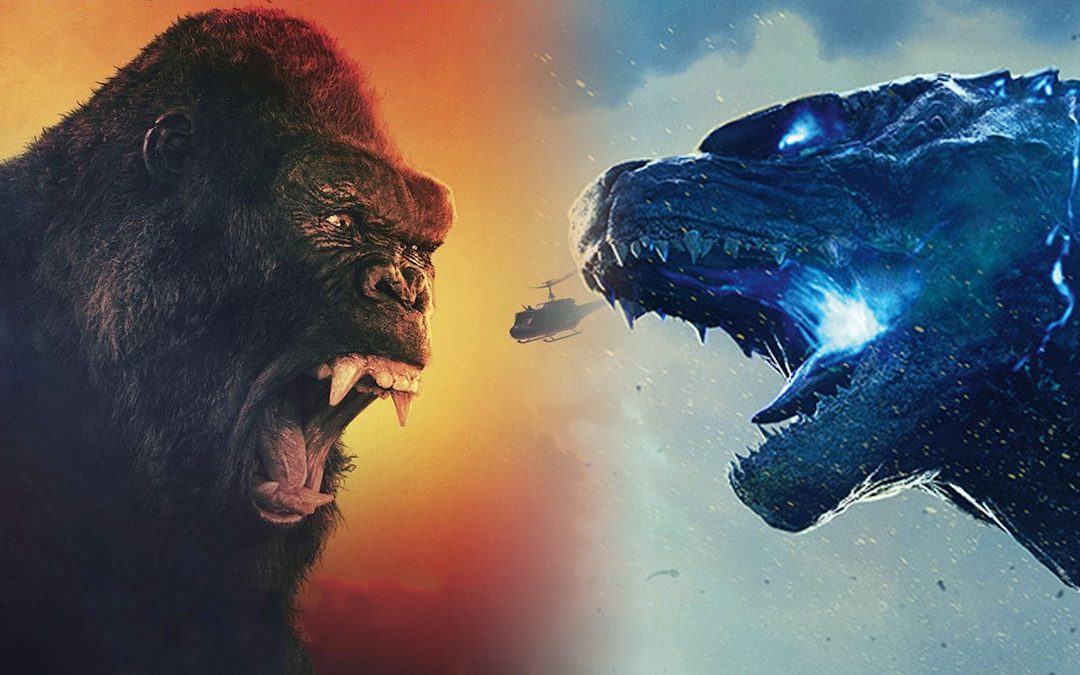 ‘Godzilla Vs. Kong’ Trailer Breakdown: All The Easter Eggs & Nods

Tickets are now on sale for Godzilla vs. Kong, and with it, it’s a good time to revisit the first epic trailer as it’s a giant dose of kaiju battle royale goodness. Fans of both the old-school Toro movies and the new Universal MonsterVerse should be pleased as the trailer was packed full of Easter eggs and nods to both.

The trailer positions Godzilla, who appears to have gone rogue and is now a threat to humanity instead of its protector, against King Kong, who has been roped into stopping Godzilla as humanity’s last hope. While most of the trailer is self-explanatory (how hard is it to understand a giant lizard and a giant ape punching each other, after all?), there are quite a few shots that have ties to the wider lore. Let’s break them down.

In an early moments of the trailer, it shows Godzilla rampaging around some cities. Except…it might not be Godzilla. One shot just a few seconds in shows a monster that strongly resembles a fan-favorite character from the old Toro films: Mechagodzilla. It certainly doesn’t appear to be Godzilla, looking more metallic than organic, and also having a red glow as opposed to Godzilla’s atomic blue energy. Mechagodzilla is exactly what it sounds like – a giant robot version of Godzilla that’s enemies with the real Godzilla. Another moment later in the trailer (we’ll get to that in a minute) all but confirms Mechagodzilla will be showing up in the film.

It’s a sight we hate to see in any King Kong film, but it would appear that Monarch (the secret scientific organization that first appeared in 2014’s Godzilla) has determined the only way to stop the rampaging Titan, Godzilla, is with another Titan. In this case, that would be King Kong, who is clearly being taken against his will as a captive of Monarch. It hearkens back to the original 1933 film when Kong was taken captive from his native land to New York City.

3. Back On Skull Island

Soon, there’s an explanation as to how Monarch managed to capture the giant Titan and land him in chains – sort of. A flashback to Skull Island, which we last saw in 2017’s Kong: Skull Island, shows a shot of a little girl holding up a Kong doll to the massive ape while a voiceover explains she’s formed an emotional connection with Kong and she’s the only one he’ll communicate with. How she ended up on the island is unclear, but, judging from the tattoos on her arms, it would appear she’s one of the native peoples of the island.

A few shots later, the trailer expands upon that connection, showing Kong stretching out his massive paw toward the little girl and her reaching up to touch his finger. Once again, it’s reminiscent of the 1933 movie, with the little girl’s bond with Kong emulating that of Fay Wray as Ann Darrow as the only human Kong would listen to. It’s also worth remembering that the natives of Skull Island worship Kong as a protective god; the way the little girl is reaching up to touch him with reverence is a callback to that focal point of the islanders’ belief structure.

In the 2014 Godzilla, there was a shot of the King of Monsters deliberately swimming under the USS Saratoga. In that movie, the humans eventually came to understand Godzilla was their protector from the other, more malevolent Titans and that Team Godzilla did not by nature want to destroy humans. Not so much with this version of Godzilla, with the trailer making a point to show the giant swimming right for what appears to be one of Monarch’s or the Navy’s large ships, smashing right through it and then whipping fighter jets and helicopters right out of the sky with his tail. Something has set the normally benevolent Godzilla off and it will likely be the central mystery of the movie to figure it out.

Kong then taunts Godzilla into coming up onto the aircraft carrier ship and fighting him mostro-e-mostro. It’s an indication of the sheer size of the creatures that the giant aircraft carrier is rocking like an unsteady canoe in the ocean from the shifting weight of the behemoths. The shot is a throwback to the Toho movies and promises a lot of old-school monster throwdown fun.

As one might expect, Godzilla finally breaks out the big gun, namely, his classic atomic breath. Luckily, Kong goes full John McClane and jumps out of the way just in time, but Godzilla’s atomic breath ray absolutely obliterates the enormous aircraft carrier. It’s somewhat difficult to understand how Kong, mighty as he is, will ever beat Godzilla at this point.

Another Mechagodzilla Easter egg, and here, we get to the crux of why Godzilla might be on a rampage against humans. The post-credits scene of 2019’s Godzilla: King of the Monsters revealed mercenaries semi-allied with Monarch had somehow taken Ghidorah’s severed head and are using it to create…something. It looks as though that something may very well have been Mechagodzilla. In this shot in the trailer, Ren Serizawa, son of the late head Monarch scientist Dr. Ishiro Serizawa, is standing in front of a screen that appears to have the plans for Mechagodzilla displayed on it. Could this be why Godzilla is so angry? Is he being framed by Mechagodzilla? Or has he caught wind of Monarch’s sinister plans? And just in case you’ve forgotten who Dr. Ishiro Serizawa is, trust me, you know him:

Plenty of Easter eggs in this shot of a corkboard full of maps and newspaper clippings. Someone has clearly been trying to determine the location of Godzilla, even figuring out what he’s up to: There’s a clipping of a nuclear disaster cover-up, a nod to Godzilla’s origins. There’s a sticky note trying to predict what Godzilla is up to next. And you’ll not there are a number of smaller Post-It notes with the word “Apex” on it, indicating they’re the locations of a company named Apex. That company is believed to be a cybernetics company – is it possible they’re the ones helping to build Mechagodzilla? Is Godzilla destroying their facilities to stop that from happening? And who does the corkboard belong to?

The trailer seems to indicate that would be Millie Bobby Brown’s Madison Russell, making her return to the franchise after appearing in King of the Monsters as the rebellious daughter of a rogue (and slightly insane) Monarch scientist hellbent on unleashing the Titans to destroy humanity and restore balance to the Earth. Judging from her previous experience with Godzilla and the fact if Monarch is in cahoots with Apex, they’d already know this information and wouldn’t need to map it out, it’s likely Maddie doing her own investigations.

Godzilla: King of the Monsters got real, real out there with its mythology (which is just fine by me). It confirmed the existence of aliens in the MonsterVerse, explaining the Ghidorah himself was an alien. The Hollow Earth theory was also a pivotal storyline in that movie, and this shot would appear to confirm both. Kong appears to be in some sort of underground cavern – or the center of the Earth – while a hovering craft that looks remarkably like a UFO hovers behind him. It’s worth noting that KotM also showed the ancient myths of the Titans in a cave painting that all but prophesied that Godzilla and Kong were destined to fight, and it appears that Kong may be gathering information here in the Hollow Earth about how to defeat the giant lizard with radioactive breath.

In the Hollow Earth, Kong may not find enlightenment, but he appears to have found an axe made from parts of other Titans, made with what is clearly a femur and what appears to possibly be some sort of dorsal plate or spike of some sort. This may or may not be a subtle bit of foreshadowing or a nod to a somewhat similar moment in the original Toho movie when Godzilla shoved an entire tree down Godzilla’s throat. In any case, with the battle -xe glowing red, it appears it has a few more properties than just being able to chop Godzilla hide…

Yes. Yes, it does. In one of the last shots of the trailer, it shows an axe-wielding King Kong jumping toward Godzilla and…the axe appears to be absorbing Godzilla’s radioactive breath. Suddenly, the scales are rebalanced. Without his atomic breath, Godzilla is very much on Kong’s level. The question remains, however: Is this the final battle? Or is it a second act battle that the trailer has cleverly cut to make it appear as though it’s the final battle to hide the fact the two will team up in the third act to fight Mechagodzilla?

Get tickets for Godzilla vs. Kong