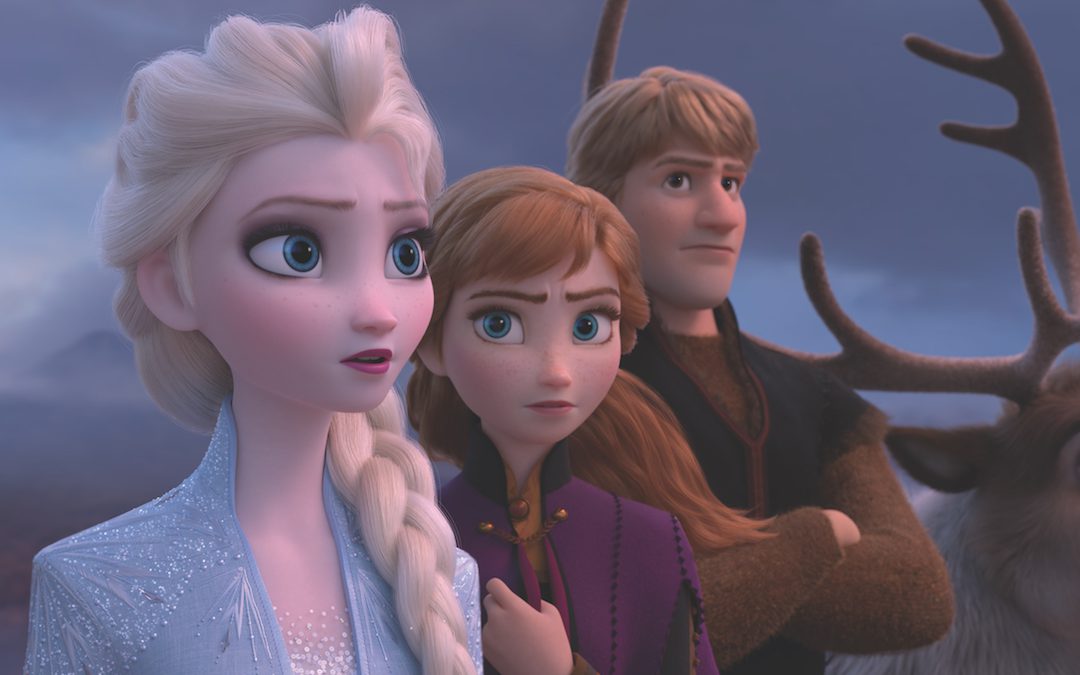 Talking The Magic Of Collaboration With The ‘Frozen 2’ Story Team

A few weeks ago, I headed to the Walt Disney Animation Studios for an early press day for Frozen 2. It was a packed day of fascinating interviews and insights from the team behind the sequel, full of gorgeous artwork and sneak peeks at the animation and story process.

One theme that kept popping up throughout the day was the concept of just how collaborative the process was for Frozen 2, even more than other animated Disney movies, simply because of the detailed level of technical demands and the high concept story for the movie. I had the chance to sit down with part of the story team for the film: Marc Smith, Director of Story, and Normand Lemay, Head of Story, and asked them about that ultra-collaborative environment for the sequel and how it affected the way they told the story.

For starters, the story itself is more complex and dark than the first movie. Team Elsa will be moving out of the familiar confines of Arendelle Castle and exploring new worlds including the Enchanted Forest and the Dark Sea, each with their own dangers and new creatures.

“In the very beginning,” said Smith, “it became clear pretty quickly that we wanted to go deeper. And just by doing that, it’s natural that the world takes on more of an expansive feel as well as a reflection of the emotional story that the characters are going on.”

But the expanded world didn’t just bring challenges to Elsa and Anna but also to the story team as they tried to storyboard the movie, explained Lemay. Things that are invisible, like wind spirit or an elemental creature, are tough to conceptualize before animation. “For those things that were out of this world or invisible,” he said, “it was a great asset to have an amazing effects team. As you start seeing the tests that the other departments are doing, it’s a relief. Like, oh, we can actually sell those ideas instead of just crudely hinting at them in our storyboards.”

Smith agreed the process not only helped them inititally, but it also influenced the way they storyboarded things altogether:

“It’s always extremely collaborative but this one was particularly unique in that it had characters that we’d never done before. So we looked at it like, ‘Okay, we’ll do this storywise,’ but the animation team would be looking at it and going, ‘Okay, what is this thing gonna look like? How will it move?’ So we had to go back and forth even more. When you first asked that, I was like, ‘Did we…?’ But you know, I guess we did get more collaborative with this one! The directors would show us the tests and we’d be like, ‘Oh, that’s cool, okay, that can maybe change what we do here.'”

Beyond just the process of storyboarding and earliest steps, Smith and Lemay found that the early internal screenings of rough cuts and certain sequences helped them tremendously in shaping the story, particularly in those harder-to-define emotional beats.

“Sometimes people will be laughing; when it’s a genuine laugh and unprompted, it’s great,” said Lemay. “But sometimes you’ll get notes back from people like, ‘Oh, this sequence really hit a nerve with me in a great way. It reminded me of this and that.’ It gives you a different point of view so we’ll think, okay, now we can push that.”

For Lemay, screenings help his process, but in particular, his favorite moment is when he finally sees his drawings and storyboards come to life in another department’s hands:

“I’ve been doing this for years, so I’m used to seeing movies as just a series of storyboards. You kind of have to learn to see beyond that to what it will be in the end. So seeing anything from the other departments, when they touch something that you just slightly evoked, and seeing how the characters are now rendered and skinned, you realize, ‘Oh, it’s more than just a drawing now!’ Once you see it that way, you know that what you drew is staying in the movie. There’s a pride in it, but also the sense that this is real. It’s not just us talking about drawings and sequences anymore. The characters are living and breathing.”

Smith agreed, and added that they know they’re on the right track during those earliest test screenings. “We’ll have screenings that are sometimes part-animated and part-storyboard,” he explained. “As soon as it starts to feel like oh, I’m totally behind this character or that character and I’m really feeling for them in the moment, that’s when I realize, oh, okay, yeah. This is going to work. That’s it, right there, if you can connect to people. That’s when you know it will all work.”

Stay tuned to Atom Insider for more pieces from the Frozen 2 early press day. Frozen 2 is in theaters on November 22, 2019.