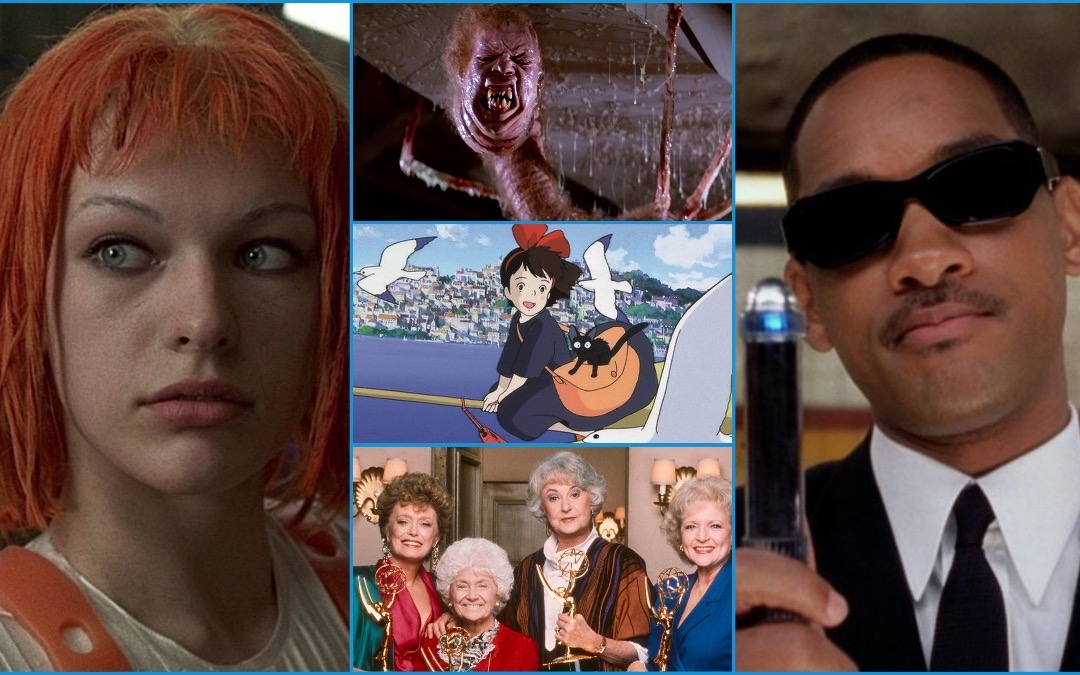 When most people think of summer and movies, they think of big franchise blockbuster season. But thanks to Fathom Events, Summer 2022 will also see a ton of exciting special events hitting the big screen. Big anniversary milestones of huge hits and beloved cult classics, Golden Girls shenanigans, Studio Ghibli Fest and more are all coming our way this summer. Here are all the most exciting special events hitting theaters in Summer 2022. A word to the wise–get your tickets now, because these always go fast!

Forever Golden! A Celebration Of ‘The Golden Girls’

Celebrate The Golden Girls with a special screening of some of the most memorable episodes from the series.  Featured episodes include:The Competition, It’s a Miserable Life, The Sisters, Scared Straight, Sisters of the Bride, The Case of the Libertine Bell.

Get tickets to Forever Golden! A Celebration of the Golden Girls.

Director John Carpenter (Halloween) teams Kurt Russell’s outstanding performance with incredible visual effects to create a chilling version of the classic The Thing. Set in the winter of 1982 at a research station in Antarctica, a twelve-man research team finds an alien being that has fallen from the sky and has remained buried in the snow for over 100,000 years. Soon it is unfrozen and unleashed, creating havoc and terror as it changes forms and becomes one of them. This special event will also feature the Terror Takes Shape documentary!

Get tickets to The Thing 40th Anniversary.

G.I. Joe faces a new enemy as an ancient society of snake people known as Cobra-La try to forcefully take back the earth from those who drove them underground eons ago. The leader of Cobra-La, Golobulus, sends out Cobra Commander and the Cobra forces to steal the Joe’s BET, Broadcast Energy Transmitter, but they have failed to do so. Golobulus and Cobra-La need the BET because it’s the only energy source that is hot enough to ripen the pods they are about to launch into the earth’s atmosphere and devolve mankind into their perfect society, one that is devoid of any intellectually sound organic life-forms. G.I. Joe knows if they don’t quickly stop the enemy from launching the spores into the earth’s atmosphere, it could devolve mankind as they know it.

Get tickets to G.I. Joe: The Movie 35th Anniversary.

From the legendary Studio Ghibli, creators of My Neighbor Totoro and the Academy Award®-winning Spirited Away, comes the 20th anniversary of a charming and magical adventure that will delight the entire family.

In this sequel to Whisper of the Heart, a quiet suburban schoolgirl, Haru, is pitched into a fantastical feline world and must find her inner strength to make her way back home. Walking with her friend after a dreary day at school, Haru eyes a cat with a small gift box in its mouth attempting to cross a busy street. The cat fumbles the package in the middle of the road as a truck is rapidly bearing down. Haru manages to scoop the cat away to safety. To her amazement, the cat then gets up on its hind legs, brushes itself off, and thanks her very politely.

Strange behavior indeed, but this is nothing compared to what happens later that evening when the King of Cats shows up in a feline motorcade replete with vassals, maidens, and even Secret Service cats. In a show of gratitude for saving his son’s life, the king cat showers Haru with gifts – including a large supply of individually wrapped live mice – and decrees that she shall marry the cat prince and come to live as a princess in the secret Kingdom of Cats.

Get tickets to The Cat Returns 20th Anniversary.

From its opening scenes in 1914 Egypt to its towering views of 23rd Century New York City, and its mind-expanding journey to the faraway world of Fhloston Paradise, “The Fifth Element” follows cab driver Korben Dallas (Bruce Willis) as he discovers that the fate of the world is contained within the mysterious Leeloo (Milla Jovovich), who literally drops from the sky and into his life. To save humanity, he must protect her from the evil industrialist Zorg (Gary Oldman), who is embroiled in an intergalactic war between the Mondoshawans and the Mangalores.

The spectacular odyssey across space and time also stars Ian Holm as the mysterious Vito Cornelius, Chris Tucker as hyperactive radio host Ruby Rhod, and Luke Perry as Billy Masterson. The story was conceived by Besson when he was just 16. “The Fifth Element” became a passion project and took more than 20 years to bring to the screen. “The Fifth Element” was nominated for eight César Awards, France’s top cinematic honor, and received three awards, including Best Director, Best Cinematography and Best Production Design.

Featuring an exclusive interview with director Luc Besson and outtakes from the film!

Get tickets to The Fifth Element 25th Anniversary.

Tommy Lee Jones and Will Smith star in this blockbuster as the Men in Black, regulators of all things alien on Earth. With our planet crawling with extraterrestrials cleverly disguised to blend in with the clueless human population, top-secret organization MiB is charged with monitoring and controlling alien activity while keeping it all a secret. World-weary Agent K (Jones) and his enthusiastic young partner, Agent J (Smith), are investigating several mysterious alien deaths with the help of the coolly resourceful Dr. Laura Weaver (Linda Fiorentino), deputy medical examiner of New York. On the trail of an intergalactic terrorist (Vincent D’Onofrio) with a deadly agenda, K and J face a simple imperative: track down the interloper or the Earth will be destroyed. It’s all in a day’s work for the Men in Black. This event includes an interview with director Barry Sonnenfeld!

Get tickets to Men in Black 25th Anniversary.

An ancient struggle between two Cybertronian races, the heroic Autobots and the evil Decepticons, comes to Earth, with a clue to the ultimate power held by a teenager. Celebrate the 15th anniversary of the action-packed spectacle that brought the beloved toys to life!

Get tickets to Transformers 15th Anniversary.

Berlin, 1931. As Nazism rises in Germany, flamboyant American Sally Bowles (Liza Minnelli) sings in a decadent nightclub and falls in love with a British language teacher (Michael York) — whom she shares with a homosexual German baron. But Sally’s small, carefree, tolerant and fragile cabaret world is about to be crushed under the boot of the Nazis as Berlin becomes a trap from which Sally’s German friends will not escape in this ground-breaking, blockbuster film version of the Broadway musical Cabaret.

Get tickets to Cabaret 50th Anniversary.

Celebrate this beloved coming-of-age story from the legendary Studio Ghibli, creators of Spirited Away, and Academy Award®-winning director Hayao Miyazaki, about a resourceful young witch who uses her broom to create a delivery service, only to lose her gift of flight in a moment of self-doubt.

It is a tradition for all young witches to leave their families on the night of a full moon and fly off into the wide world to learn their craft. When that night comes for Kiki, she embarks on her new journey with her sarcastic black cat, Jiji, landing the next morning in a seaside village, where her unique skills make her an instant sensation. Don’t miss this delightfully imaginative and timeless story of a young girl finding her way in the world, featuring the voices of Kirsten Dunst, Janeane Garofalo, Phil Hartman, and Debbie Reynolds.

Get tickets to Kiki’s Delivery Service.

It’s 1982, and Taeko (Daisy Ridley) is 27 years old, unmarried, and has lived her whole life in Tokyo. She decides to visit her relatives in the countryside, and as the train travels through the night, memories flood back of her younger years: the first immature stirrings of romance, the onset of puberty, and the frustrations of math and boys. At the station she is met by young farmer Toshio (Dev Patel), and the encounters with him begin to reconnect her to forgotten longings. In lyrical switches between the present and the past, Taeko contemplates the arc of her life, and wonders if she has been true to the dreams of her childhood self.

From Academy Award®-nominated director Isao Takahata (The Tale of The Princess Kaguya) and general producer Hayao Miyazaki, Only Yesterday is a masterpiece of time and tone, rich with humor and stirring emotion, and beautifully animated by one of the world’s most revered animation studios.

Get tickets to Only Yesterday.