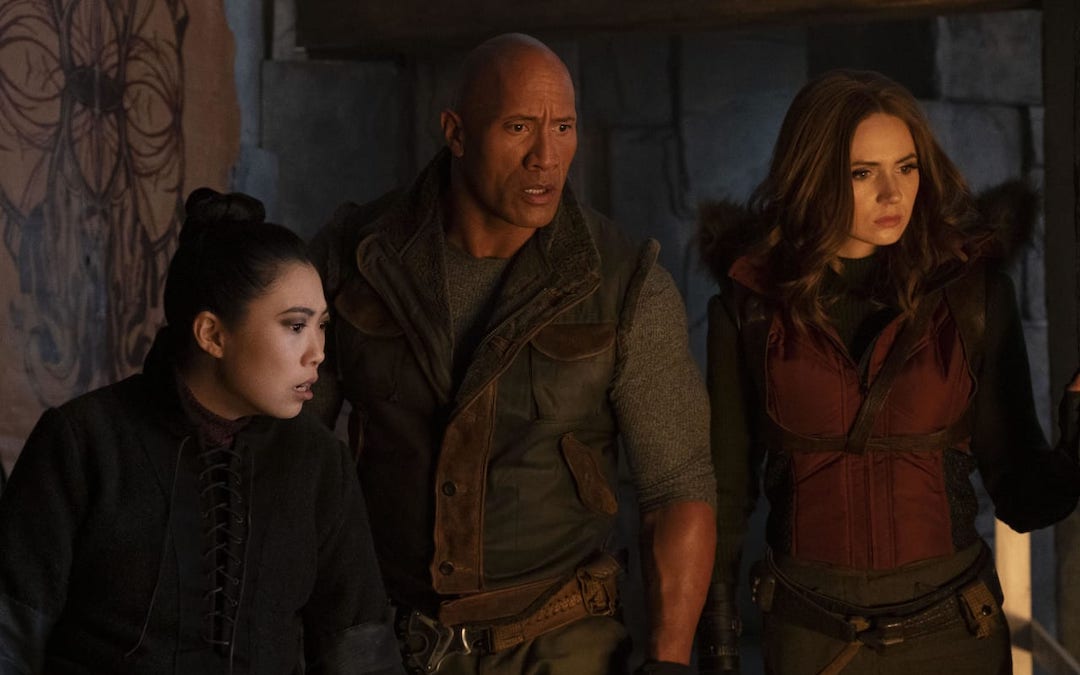 Everything You Need To Know Before Seeing ‘Jumanji: The Next Level’

This week, Jumanji: The Next Level hits theaters. Its predecessor, Jumanji: Welcome to the Jungle, grossed almost a billion dollars two years ago. Thanks to positive reviews and solid worth of mouth, not to mention the star power of its lead quintet, led by Dwayne Johnson, Karen Gillan, Kevin Hart, Jack Black and Nick Jonas, a sequel to the somewhat surprise hit was quickly greenlit. The story was surprisingly sweet, with solid messages about overcoming insecurities and flipping the script on the typical “catty teenage girl” trope.

If you’ve watched the trailer for the sequel, however, you might have noticed that a few things have changed – namely, who’s swapped into whose bodies this time around.

If you’ve forgotten what happened in the first movie or aren’t sure what’s going on in this one, set your worries aside. We have a recap and primer to quickly catch you up on everything you need to know before Jumanji: The Next Level hits theaters this Friday.

What You Need To Remember From The First Movie

The first film opens 20 years ago when teenager Alex Vreeke is accidentally sucked into the magical Jumanji game, now a video game, and becomes trapped. Fast-forward two decades later and teenagers Spencer (Alex Wolff), Anthony “Fridge” Johnson (Ser’Darius Blain), Bethany Walker (Madison Iseman) and Martha Kaply (Morgan Turner) all end up in detention together. Their punishment is to help clean out the old basement of the school. While there, Spencer discovers the old Jumanji video game and soon, just like Alex, the four teenagers are transported into the game.

Once there, they discover they’ve been zapped into the bodies of in-game avatars, each with their own strengths and weaknesses. Upon reaching a particular checkpoint in the game, they meet pilot Jefferson “Seaplane” McDonough (Nick Jonas), who reveals his real name is Alex. They realize he’s the teenager who disappeared two decades ago, and he’s been trapped in the game ever since. Unfortunately, he’s also down to his last life – if he dies again, he dies for real. The five of them realize that if they want to survive and escape the game, they must work together in order to get back to the real world. Spoilers: They do. And along the way, they upend some stereotypes about their characters. Bethany proves herself to be more than just a popular mean girl and becomes Martha’s biggest cheerleader. Martha learns to not just write off Bethany as being a ditzy blonde, along with gaining self-confidence, and Spencer and Fridge repair their broken friendship.

Who Are The Characters And Powers Of The First Movie?

Throughout the game, each one of the players used their abilities (and, in some cases, their weaknesses) at various times to progress in the game, particularly in the last stage where they must storm a mountain and get a mystical gem back into its statue in a deadly version of Capture the Flag before yelling “Jumanji!” in order to win the game. Bethany/Professor Shelly, for example, is the only one who can read the map that gets them to the next stage of their quest. Martha/Ruby helps the gang infiltrate and get to the transport hangar by using her skills of dance combat to defeat the henchmen guarding it. Spencer/Dr. Bravestone is the mastermind of the group, often relying on the weapons knowledge of Fridge/Mouse. And Alex/Seaplane is the one who flies them to the final stage of their quest. At one point, Martha/Ruby even helps the team by using her weakness to venom as a strength, allowing herself to be bitten by a snake in order to respawn on another part of the mountain path farther ahead.

What’s The Story Of The Sequel?

As we’ve seen from the trailers, this time around, things have gone sideways. Spencer jumps back into the game – or is sucked back in – and the others decide to follow him and bring him back. However, the game starts glitching and pulls them in before they even have the chance to choose their avatars. Upon waking up in the game, they realize everyone’s been switched around in their avatars and Spencer and Bethany are missing. But the biggest potential problem is that they’ve accidentally picked up two geriatric hitchhikers in the form of Spencer’s grandpa, Eddie (Danny DeVito) and his friend, Milo Walker (Danny Glover).

They now have to navigate and defeat completely new parts of the map, including a desert and an arctic climate, in order to escape the game. The dangers are compounded when they realize the game is broken and buggy, with random glitches throwing curveballs at them in their quest to find and save Spencer and Bethany and, oh yeah, Alex, who has also reappeared in the game – or at least, Seaplane’s avatar has.

Luckily, they get a few new upgrades to their characters to help them in the game.

Who Are The New Characters And Powers In The Sequel?

As mentioned, this time around there are new characters who get pulled into the game and avatars get switched around. Of all the veteran players from the first movie, only Martha ends up in her former avatar of Ruby Roundhouse. However, when their character screens pop up, she discovers she has a new strength: nunchucks. It’s a pretty sweet skill to add to her already impressive list. Fridge ends up in the body of Prof. Shelly, and he gains three new weaknesses along with endurance that aren’t exactly conducive to surviving in a desert climate: heat, sun and sand. However, he’s also gained the power of geometry, so hopefully, they can math their way out of it.

As for the two elderly newcomers, Eddie ends up in the body of Dr. Bravestone. We haven’t yet seen his character screen pop up in a trailer, but considering the list of strengths he had before, it will be more interesting to see if he acquires a weakness this time around. Milo gets dropped into the body of Mouse Finbar, who, along with his weapons mastery and zoology skills, has also picked up a skill with linguistics. We can hazard a guess that at some point, they’ll either have to decode an ancient bit of writing or perhaps converse with characters who speak other languages.

Another mystery is Awkwafina, who also joins the cast as a new character, Ming. But whether she’s one of the original crew in a new avatar or an entirely new character remains to be seen. Is she Spencer? Bethany? Or even Alex?

The first Jumanji was one of the most delightful surprises of 2017 and the sequel looks to be just as much fun. Just seeing Dwayne Johnson trying to imitate Danny DeVito, and Kevin Hart imitate Danny Glover alone will be worth the price of admission.

Jumanji: The Next Level is in theaters on December 13th. Get tickets here.