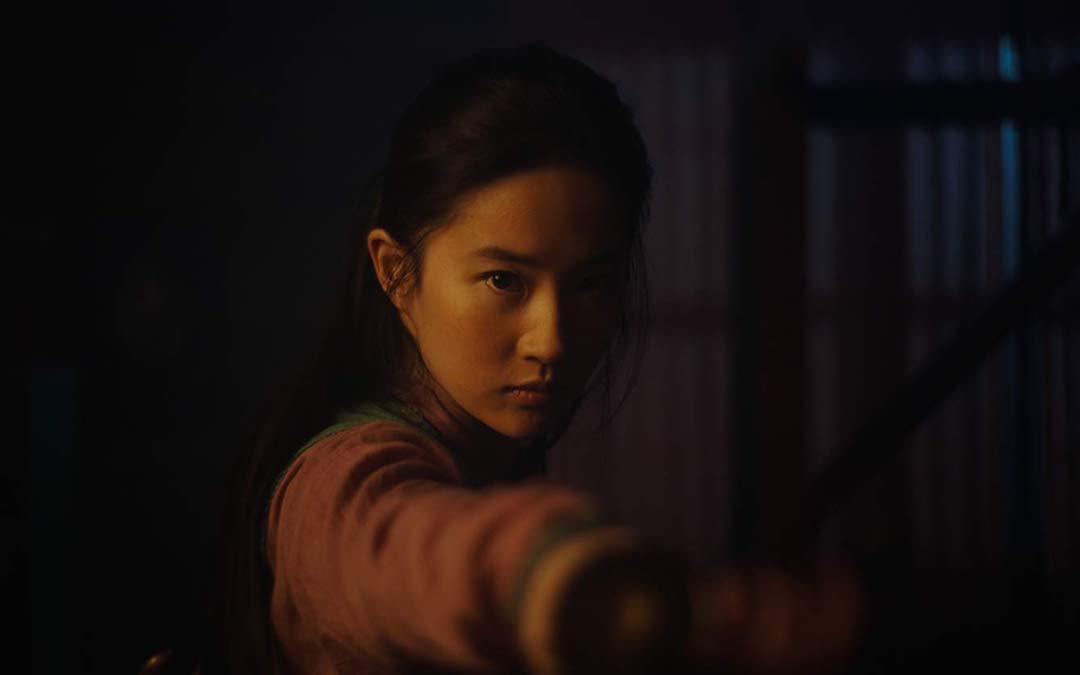 Back in 2010, Disney first announced the live-action retelling of the 1998 animated film Mulan directed by Charles Russell (The Mask) and starring international actress Zhang Ziyi as the legendary Chinese warrior. Unfortunately, the film never came to fruition and talks about giving Mulan the live-action treatment were shelved for another five years.

In 2015, with the success of live-action Disney movies like Maleficent and Cinderella, Disney brought Mulan back onto the table, bringing in director Niki Caro (Whale Rider) and screenwriting duo, Richard Jaffa and Amanda Silver, to the fold. Disney brought in China’s biggest stars to be part of this movie with Donnie Yen, Gong Li, Jet Li, and introducing American audiences to China’s sweetheart Yifei Liu as Hua Mulan.

Now, 22 years after the release of the animated movie, Mulan will hit the big screens next month.

In October 2019, Atom Tickets was invited to New Zealand, where the cast and crew of Mulan were in the middle of filming Mulan’s big fight scene. In between takes, the cast and crew came by to talk about being part of this beloved classic.

Here are a few things we learned while on the set.

1. The Music From The Animated Film Will Still Have A Presence In The Movie

The producing team behind the live-action movie knew fans were upset when it was announced the film would not be a musical and explained that this film combines the animated film with the original Chinese “Ballad of Mulan” folksong which is rooted in realism like The Jungle Book. “We made the decision that we wanted to keep the world — even though it’s a fantasy — more grounded more realistic so those emotions really played and the threat is very real so we are using music in a slightly different way,” producer Jason Reed explains.

But, don’t fret. Fans may recognize some of the music played throughout the film, assures Reed:

“I can guarantee you that there will be songs you recognize and remember will in the movie. It will not be [a] traditional break into [the] musical. They’re not going to stop their workouts and do a big musical number to camera. However, there are a number of songs that are iconic for the movie and tell a great version of the story and they are very helpful to us in how we’re putting the movie together. And it gets a little easier in animation to keep the tension and the reality in place and still have people break into song and sing to camera.”

2. The Changes Are Meant To Pay Respect To The Chinese Story

Many fans were disappointed in the changes from the animated movie, but the production team wants audiences to know it’s only to pay respect to Chinese culture and the original poem the movies were based on, “The Ballad of Mulan.”

For example, in the animated version, Mulan cuts her hair before joining the Chinese army to disguise herself as a man, but in this film, she keeps her hair long. Reed explains, “In the Disney film, the scene where she’s cutting her hair off it’s actually an anachronism. So Chinese warriors, male warriors wore their hair long. Chinese men wore their hair long. For her to cut her hair off, it would make her look more like a woman than less like a woman in reality. Since we’re doing the live-action version, because we’re looking at the worldwide market we thought we had to bring that level of cultural accuracy to it.”

3. There Will Be Elements Of Mushu In The Film

Another thing that sparked controversy among fans were the reports of the film not having Mulan’s beloved sidekicks, Mushu and Cri-Kee, and Reed addressed that, too:

“Obviously, Mushu is a beloved character and one of the most memorable elements of the animated film. It turns out that the traditional Chinese audience did not particularly think that that was the best interpretation of the dragon in their culture, that the dragon is a sign of respect and it’s a sign of strength and power, and that sort of using it as a silly sidekick didn’t play very well with the traditional Chinese audience.”

To appease all audiences, Reed explains they took the symbolism of the Mushu, the ancestral dragon guardian of the Hua family, and made sure to include it in the wardrobe and weapons. As for Cri-Kee, Mulan’s good luck charm, fans should expect to see him interpreted in human form, played by Jun Yu.

4. Disney Made Sure To Consult The Asian Diaspora And Chinese Audiences

Disney executives wanted to do Mulan right and consulted four major audiences on the importance of the character of Mulan and how they’d like to see the film move forward in a thoughtful way. After consulting with four different groups – Chinese audiences, the Asian diaspora, women, and Disney fans, Reed hoped to have found a way to tie all audiences together.

“As a concrete example, traditionally the story of Mulan is a story about a young girl finding a way to do her duty. And it’s all about duty and kind of about the devotion to the Confucian order, and for what we found in our research that was for the diaspora community. They read it as a story about a young girl finding her way against her parents, that despite the rules and despite the traditions, she found her own way forward. So those are sort of two completely different ways of reading the story.”

Although there were no Chinese historian consultants on set, Reed assured they worked with a council of advisors during the development and design phase.

“So we have a lot of Chinese folks around our whole stunt team, the vast majority of our stunt team is from China,” says Reed. “A number of our actors are from China, so we get little tweaks here and there. We had 25 different experts in various areas that were helping with design, costumes, makeup, architecture, [and] story.”

5. Grandma Hua Is Not In The Film But Mulan Will Have A Sister

American audiences may be confused to see Mulan with a little sister, Xiu (Xana Tang), because in the animated film, Mulan is an only child who is pushed to meet with the matchmaker by her mother and hilarious, wise-cracking grandmother. Audiences may not know this, but in one of the versions of the original ballad, Mulan has younger siblings. So the writers decided to add a sister instead of a grandmother.

6. Li Shang Is Split Into Two Characters Due To The #MeToo Movement

The crew wants it to be known that there is a Li Shang in the film, but decided to split the character into two different ones due to the #MeToo movement. Not wanting a commanding officer to fall in love with his subordinate, the producing team decided to have Commander Tung (Yen) lead the team into battle and her actual love interest, Hongwei (Yoson An), be her equal in the army.  “I think particularly in the time of the #MeToo movement, having a commanding officer that is also the sexual love interest was very uncomfortable and we didn’t think it was appropriate,” said Reed.

Reed, who is well aware of Li Shang’s LGBTQ icon status, revealed that Hongwei and Mulan will be drawn to each other throughout the movie – even when Mulan is in disguise as a man.

An, who was visiting the set that day, is ready to be that bisexual icon. He confirmed Hongwei notices something about Hua Jun (Mulan’s disguise) that the other boys in the training army do not. “They start off on the wrong foot, really,” An shared.“Yeah, they start off on the wrong foot. As they progress through the training together, they kind of have this unspoken bond about it because they recognize each other’s warrior spirit. That’s how they kind of build their friendship up to begin with through the training and acknowledging each other.”

7. The ‘Witch’ Element Is To Make It Stand Out From Other Mulan Movies

Chinese studios have recreated the story of Mulan many times on the big screen so Disney knew they had to do something to stand out with their Mulan story. “One of the things that — as we were talking to filmmakers in China about how we can best — going back to this, how do you service two audiences, how can we make a movie that bridges [the gap between Western storytelling and Chinese stories]?” says Reed.

With Gong Li as the witch, Xian Lang, who joins forces with the villainous Bori Khan (Jason Scott Lee), Reed explained that adding that character would bring the fantastical elements as well as another adversary for our woman protagonist:

“We wanted to have a female antagonist in the movie as well as just having a male antagonist so that we could explore female power in that society in different ways and have different perspectives on it. There are some other characters that we added, or bifurcated that have helped us do the same thing in other places.”

8. Unlike The Animated Film, The Enemy Has A Valid Reason For War

In the animated version, Shan Yu was the evil leader of the Huns and was bent on taking over all of China. Lee says that Bori Khan has a different and personal reason for war with the Emperor of China – vengeance. Bori Khan and his army want to reclaim the land and culture taken from them.

Due to the censorship issues from China, the intentions behind Bori Khan’s fight is not as obvious, but Lee approached the character with the idea of colonization. “So the way I’m approaching it is that much like in colonialism that pushed out native or indigenous cultures, Bori Khan’s fight is to regain and recompose his culture of the Rouran people,” says Lee. “And it’s to reestablish their power structure.”

Lee says that Bori Khan is extremely ruthless in his methods because the character has been through many wars. “He’s tough, just a tough character that just — almost can’t get knocked down,” Lee explains. “I think that’s the respect he’s given by the tribal leaders of the other Rouran tribe. It sort of allows him to unify the other groups to increase his army, increase his power, and and have the ability to tackle the Emperor.”

Mulan is set to be released on March 27th. Get tickets here.