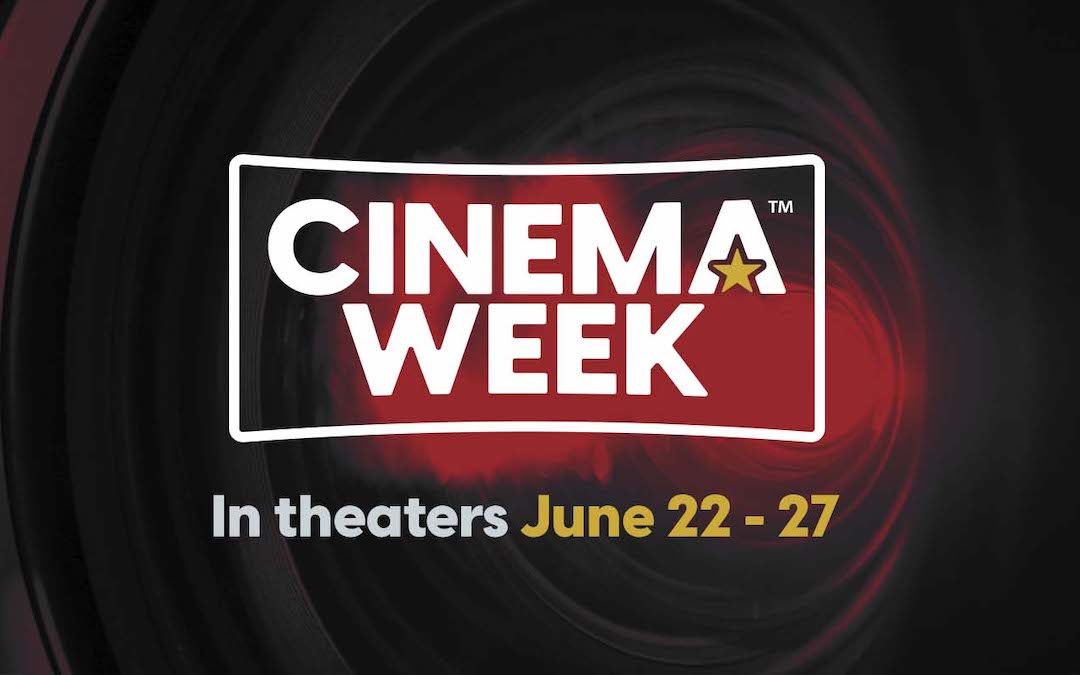 It’s the first ever Cinema Week, and that means plenty of special events at movie theaters around the country this week, the week of June 22-27. It’s no secret that the past 15 months has been brutally hard for the movie industry, particularly theaters. But with theaters reopening and life cautiously getting back to normal, multiple sponsors, theater chains, and moviegoing advocates have come together to launch Cinema Week. As the official Cinema Week site describes it, it’s “a nationwide campaign to unite cinemas and put butts in seats.” In other words, it’s a way to get people even more excited about going back to the movies by kicking things off with a week-long celebration:

Whether you’re a cinema owner or a moviegoer, Cinema Week is here to celebrate and preserve the culture of going to the movies by giving both a collective point in time to rally around. Cinema Week is a five-day nationwide event designed to energize moviegoers and is inclusive of exhibitors of all sizes.

The special events and activities will vary depending on the theater chain and location and each experience is set to be unique. That said, the Cinema Week site itself is offering two different types of prizes and giveaways.

In honor of Cinema Week, Paramount is also getting in on the action and offering a special, one-night-only double feature of A Quiet Place and A Quiet Place Part II on Wednesday, June 23. The screenings will be held at 5:00pm and 7:00pm across the country.

Get tickets for the Quiet Place double feature

Theater chains are also getting into the spirit of Cinema Week with special events and offers of their own. A number of individual theaters are also doing their own things in addition, so check your local theaters for event details. In the meantime, here are some of the Cinema Week events happening at a few of the biggest theater chains around the country.

Cinemark has a ton of events throughout Cinema Week sure to entice moviegoers from all over.

XD Upgrade – Cinemark Movie Rewards members can purchase a large popcorn and large drink during Cinema Week in order to unlock a free XD upgrade to one of Cinemark’s THX Certified XD theaters.

Special Movie Events – Along with the Quiet Place double feature, Cinemark is also holding a special 20th anniversary screening of The Fast and the Furious on Tuesday, June 22. Tickets for adults are $5 and tickets for kids are $3.

Sweepstakes & Offers – Cinemark is also offering a number of prizes and offers, including a special collector’s print of A Quiet Place Part II signed by John Krasinski, a Space Jam: A New Legacy private watch party, a private screening of your choice, and a free 1-month Movie Club trial.

In addition, special events will be happening June 25-26 at the following local Cinemark theaters:

Landmark is also getting into the game with a number of offers.

Win a 2021 Season Pass – One winner will be selected to win a Season Pass, giving them the chance to earn free movie tickets through the rest of 2021.

Film Aficionado Ticket Book – Three winners will be chosen to win a book of ticket vouchers to keep for themselves or to share with friends.

Free Private Theater Rental – Free private theater screenings for up to 10 people will be given away during Cinema Week, as well.

Concessions & Discount Days – On Tuesday, June 22 and Wednesday, June 23, concessions and tickets will be offered at discount prices.

Advance Screening – Landmark is offering advance screenings of the movie Werewolves Within on Wednesday, June 23 at the following locations:

Naturally, AMC also has a few fun events and special offers lined up for Cinema Week.

Free Movie Tickets – By visiting AMC’s site and filling out a sweepstakes form from June 18-24, moviegoers can be entered to win free movie tickets.

Free & Unlimited Popcorn Refills – From June 22-30, AMC is offering free and unlimited popcorn refills with any size purchase of popcorn.

Brandon Jones, executive chairman of the founding committee of Exhibitor and Studio Partners for Cinema Week said it best:

“Movie theaters connect us. They are where stories are shared and discussed in a communal experience. Following such a challenging year, I’m humbled by the enthusiasm and support from our sponsors and partners who want to help us remind audiences that the magic happens when you go to the movies. There’s nostalgia there. It’s where we go for entertainment, and by launching Cinema Week, we want to preserve the culture of going to the movies.”