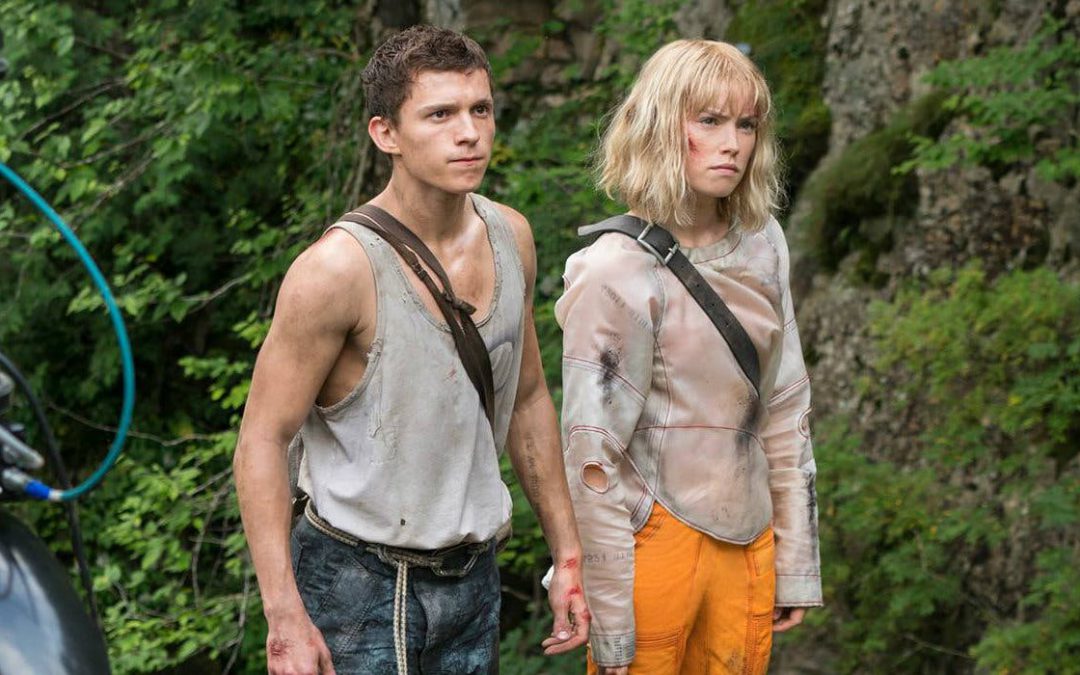 All About ‘Chaos Walking’ And The Book It’s Based On

The recent young adult dystopian movie boom appears to have died down. No more Maze Runner, Hunger Games, or Divergent movies to satisfy that itch to see teens in peril (and in love).

But fear not. The YA book world is vast and the fictional universes that teen characters traverse and struggle their way through are neverending. One such sci-fi book series young readers have gone nuts for in recent years is Patrick Ness’s Chaos Walking. Soon we’ll see on the big screen just why this series has enraptured so many.

What’s The Status Of The ‘Chaos Walking’ Movie?

Ness’s series, which starts with the 2008 book The Knife of Never Letting Go, was adapted for the screen by a series of writers including Charlie Kaufman, Lindsey Beer, John Lee Hancock, Gary Spinelli, and even Patrick Ness himself. The first film in the Chaos Walking franchise originally had a release date of March 1, 2019, a date that was later bumped almost two years to January 2021. Edge of Tomorrow director Doug Liman directs and Spider-Man: Homecoming’s Tom Holland and Star Wars: The Last Jedi’s Daisy Ridley star in the film’s two lead roles.

The movie has undergone extensive reshoots since it first began filming in late 2017, which is not uncommon for a sci-fi film with a sizeable budget, but things were made more difficult due to the packed schedules of Holland and Ridley. Their roles in both the Marvel Cinematic Universe and Star Wars Universe, respectively, have made the film’s production schedule that much more complicated.

Difficulties aside, Ridley teased fans with a set picture during filming that showed her in character as Viola Eade (blonde wig and all), standing aside Holland’s character, Todd Hewitt. The picture does much to incite excitement for the new film (and a likely franchise to follow).

So what exactly is Chaos Walking and why should fans of both dystopian and sci-fi young-adult movies make plans to see it? Well, fans of the book can give you quite a few reasons.

What The ‘Chaos Walking’ Book Series Is About The Knife of Never Letting Go is about a boy named Todd Hewitt (Holland) who lives in an all-male community called Prentisstown on a colony planet called New World. Todd’s been told by the others in his community that the majority of the planet’s population was killed during a war with the planet’s native inhabitants, the Spackle. The casualties included all of the Spackle and all of the human women. The mass devastation came from a virus that was released during the war.

That same virus had the side effect of giving all those who survived the ability to read each other’s thoughts. This mind-reading capability accounts for the non-stop slew of what the community calls “Noise,” the general chatter of being able to hear all the other men’s thoughts and the thoughts of animals.

Todd, the youngest member of the community, is days away from his birthday after which he’ll officially be considered a man in society. One day while out in the woods with his dog, Manchee (whose thoughts he can also hear), Todd finds a spot somehow void of Noise. He tells his caretakers, Ben (to be played by Demián Bichir) and Cillian (played by Kurt Sutter) about the Noise-less spot and Todd’s thoughts quickly travel around the town.

Ben and Cillian, alarmed at Todd’s discovery and having already made plans to get Todd out of Prentisstown before his birthday, expedite their plans and prepare Todd to escape Prentisstown. Mayor Prentiss (to be played by Mads Mikkelsen) orders an army of men to stop Todd from escaping.

Todd and Manchee set off with Todd’s deceased mother’s diary with a map of other towns. Early into his escape, he discovers that patch of Noise-lessness was caused by a girl he encounters in the woods. Her name is Viola Eade (Ridley’s character) and she and her parents crash-landed on New World. Viola is the first female Todd’s met, not to mention the first person whose thoughts he can’t hear.

The two struggle their way toward the settlement of Haven, unsure if it even exists. An army of men from Prentisstown pursues them, including the evil preacher, Aaron (to be played by David Oyelowo), and Mayor Prentiss’s son, Davy (played by Nick Jonas). Throughout their action-packed adventure, Todd discovers that much of his upbringing was steeped in lies.

The Line Between Dystopia And Sci-Fi

The story may sound more dystopian than sci-fi as interpersonal dynamics in a primitive post-war society are the focus, but the book series gets decidedly more sci-fi as it progresses. A bulk of the story involves Todd and Viola making their way through the wilderness and it will be interesting to see how Liman establishes New World as distinct from Earth.

The most alien element of the film is sure to be the Noise, the non-stop buzz of human and animal thoughts Todd and the other men hear almost constantly. There is also more to the story when it comes to the Spackle, or “Spacks” as they are called colloquially, so signs of the planet’s native alien race are sure to appear in the film. Fans of either genre are sure to be satisfied in the world-building built into the story. Liman did a great job building a world overtaken by aliens in Edge of Tomorrow, so he’s likely to have some unique ideas about how to tackle the sci-fi elements of Chaos Walking.

How The ‘Chaos Walking’ Movie May Differ From The Book The book’s nonstop chase and pursuit makes for a thrilling on-screen adaptation, so many of the major beats will likely be found in the film, but there are a few things that may be different.

The first–and most obvious–difference between the Chaos Walking books and the upcoming film is Todd’s age. In the book, Todd is 12 going on 13. His age is especially significant because his birthday is a month away when the story starts, and his escape from Prentisstown is crucial because of the mysterious ritual that happens in Prentisstown when a boy turns 13 and becomes a man in the eyes of society.

Clearly, Tom Holland isn’t passing for a 12-year-old no matter how much of a baby face he has, so the writers either changed the ritual age to be older or they removed that element from the film. Considering much of the urgency of Todd’s escape is built on his impending birthday, it seems likely the film will just have shifted Todd’s age and have him as 17 going on 18 or something similar.

Another possible difference, also having to do with the different ages of Todd and Viola in the film adaptation, is whether there will be any romance between the two lead characters. In the books, Todd and Viola grow close but not romantic. Considering how young Todd is in the book, it’s easy to see why, but when Hollywood intervenes and a franchise is on the line, it’s quite possible we’ll see the insertion of a romance between Todd and Viola, if not in Chaos Walking then in the probable sequels.

As of now, no listing for the casting of Manchee’s voice actor has been reported, meaning this significant animal character may have been dropped from the film. Fans of the book are sure to dislike this possible modification to the story as Manchee is a crucial part of the on-the-run trio and is involved in a couple notable and emotional moments from the book. Filming with an animal is never easy, but fingers crossed Liman hasn’t excluded Todd’s dimwitted but lovable side-kick.

Watch Out For The Cliffhanger

Any reader of The Knife of Never Letting Go will tell you up front that if you decide to read the book, be sure to have the sequel immediately on hand for when you finish. The book has a doozy of a cliffhanger that is picked up immediately in the second book, The Ask and the Answer.

The first book’s ending is satisfying in its major revelations for Todd as he discovers huge truths that have been kept from him, and there’s a great showdown as well, but no one should expect a neat and tidy ending for the first film. This is, of course, exactly the sort of reason Lionsgate was interested in the series, as cliffhangers make for surefire turn-out to subsequent films.

Just like the Hunger Games series, the Chaos Walking books provide plenty of story to keep the series going, and to get even more epic in scope. Todd’s world expands far beyond Prentisstown with New World’s other communities joining the conflict and the stakes are raised ever higher as the story progresses. By the third book, Monsters of Men, Todd and Viola are joined by other major characters to take on some serious villains.

The book series delves a lot into morality, sexism, colonization, forgiveness, and, of course, the supernatural capabilities involved with Noise as Todd learns to wield it rather than be brought down by it. Expect sequel films to include out-and-out war and a whole lot more sci-fi.

The Chaos Walking series is considered by some to be closer to the new adult genre than young adult genre due to its graphic violence and often adult language, but the character’s age makes it primarily a young adult book. The film’s change in character ages already ups the possible grit of the film and we’ll see how closely Liman stays to the books with the other gory details.

Will Chaos Walking suck viewers into the next big Hunger Games-like franchise? Time will tell, but already the film holds plenty of promise with A-list actors at the forefront and a seasoned action director at the helm.

Book fans are notoriously hard to please when it comes to franchise adaptations, but the unique story found in the Chaos Walking book series has the potential to make for an engaging, action-packed, and thrilling movie-going experience.

Check out Chaos Walking on January 22, 2021 when it releases in theaters.