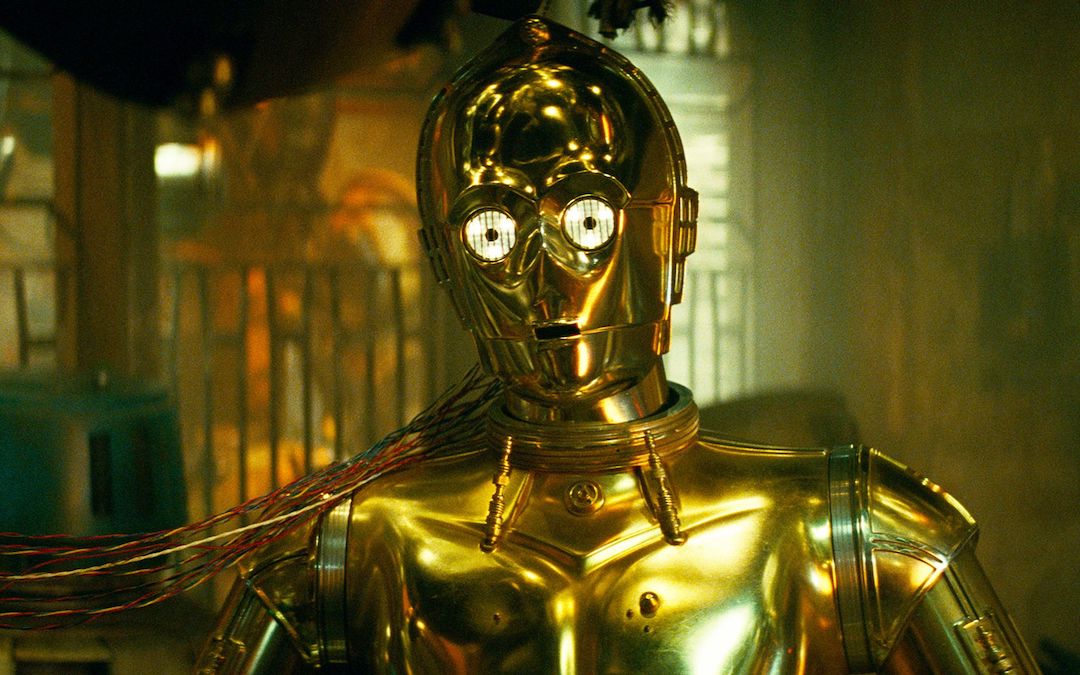 The Long, Strange Journey Of C-3PO In ‘Star Wars’ & How It Might End

Quick. Which Star Wars actor has been in more Star Wars movies than any other? Mark Hamill? Nope. Carrie Fisher? No. Peter Mayhew? Again, nope.

It’s Anthony Daniels, a.k.a. C-3PO. To date, he’s appeared in nine Star Wars movies; The Rise of Skywalker will be his tenth appearance as the fussy droid. R2-D2 has appeared in just as many, but his on-screen time has been split between two actors, first Kenny Baker, then Jimmy Vee after Baker’s passing. The one Star Wars movie C-3PO hasn’t appeared in? Solo: A Star Wars Story – and even then, Daniels appeared as a character named Tak.

Here’s the breakdown of how much time he’s had in each movie:

It’s understandable, then, that the press tour for Rise of Skywalker has put Daniels front and center, with plenty of events and moments paying homage to the longest-tenured Star Wars actor in the cast. All this attention, plus one peculiar line in the trailer for The Rise of Skywalker, has led fans to believe maybe the C-3PO doesn’t make it out alive this time:

“What, uh, what are you doing there, Threepio?” asks Poe Dameron.

“Taking one last look, sir…at my friends,” responds the droid.

It’s certainly an ominous line, and at first glance, one might think he’s saying it to Rey, Finn and Poe, the ones who are the actual fighters of the group and going on the mission. But the scene just before that shows him being worked on by a tiny creature. That tiny creature is Babu Frik, and he’s a droidsmith. This is important, as Threepio has specific wiring and protocol, and droidsmiths are capable of overriding all of that and reprogramming droids. Perhaps why we saw C-3PO with red eyes in the first teaser trailer? 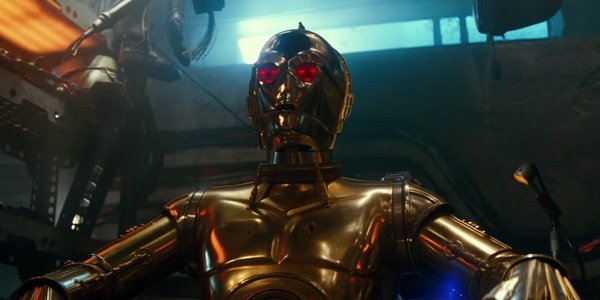 C-3PO was originally built as a protocol droid, and not one for fighting. He’s almost always left the fighting to the Jedi. I don’t know about you, but it sure seems like Babu Frik overrode his programming and turned him into a battle droid, doesn’t it? His line from the trailer, then, may not be about the fate of his friends at all, but about himself. Perhaps he’s going on a suicide mission and he knows it. It would certainly be fitting for the character who holds the entire Star Wars universe together – no, really. Just consider Threepio’s story arc. As a support droid, his support and help at crucial times underpins everything that happens in the Skywalker saga.

In the prequels, he was initially salvaged and rebuilt by the Skywalker who started it all, Anakin, who creates the droid to help his mother. C-3PO’s influence is immediately felt: He’s the one who perfects the last bit of Anakin’s podracer for the Boonta Eve Classic, a race Anakin has to win if he is to escape his life on Tatooine and start a new one as a Jedi apprentice under Qui-Gon Jinn. In Attack of the Clones, he subtly encourages Anakin and Padmé’s relationship and helps rescue Obi-Wan Kenobi from Geonosis.

Most importantly, once he realizes Anakin has gone full dark side in Revenge of the Sith, he makes it his mission to protect the pregnant Padmé, who is carrying twins, Luke and Leia. He and R2-D2 sneak Padmé away and Threepio pilots them far away to Polis Massa, where he is then a witness to both the birth of the twins and the death of Padmé. After being turned over to Bail Organa, he reluctantly allows his memories to be wiped in order to protect the twins from their Sith Lord father ever finding them.

In the original trilogy, C-3PO, along with R2-D2, are the first two characters we ever see in Star Wars, in the opening scene aboard the Tantive IV which is under attack by an Imperial Star Destroyer. What’s more, C-3PO is the first character to ever speak in the franchise. He and Artoo escape, but that’s not the important part. The important part happens when they’re captured by Jawas and sold to Owen Lars: Our persuasive protocol droid subtly convinces Lars to take R2-D2, as well. It’s a pivotal moment, even if Threepio doesn’t realize it, as R2-D2 is carrying an important and secret message from Princess Leia, leader of the Rebellion, to deliver to Jedi Master Obi-Wan Kenobi. If C-3PO hadn’t told Owen to take R2-D2, Luke never would have seen Leia’s message, never would have been introduced to Obi-Wan Kenobi, never would have started his training as a Jedi. Later, crucially, Threepio offers to donate his own parts to R2-D2 when his little droid companion and friend, the carrier of crucial and top-secret information, is badly damaged in the Battle of Yavin.

Throughout the OG trilogy, Threepio subtly influences his human companions in a number of ways by reading their personalities and alternately motivating or needling them when needed. He’s the one who challenges Han Solo’s ego and gets the smuggler to fly through the asteroid field with a fired-up Han dropping his now-famous “Never tell me the odds.” He’s the one who convinces Luke to join the Rebellion. At various times, he’s the one to step in and disrupt situations his companions threaten to derail with their emotion: Saving Chewie from being killed by Imperial soldiers when he goes berserk after Han is frozen in carbonite, interrupting Han and Leia during romantic moments and killing the vibe to ensure their minds remain on the mission and not their sexual tension, etc. You could argue that it’s simply the uptight droid lacking social awareness, or being uncomfortable around romantic displays, but he’s a protocol droid. He’s literally built to read the room and navigate social situations.

In the new trilogy, C-3PO has admittedly been sidelined a bit, only receiving a scant few minutes of screen time in both The Force Awakens and The Last Jedi. Despite having more time in Rian Johnson’s film than in J.J. Abrams’ first, Anthony Daniels has been open with his critical feelings regarding Threepio’s purpose in The Last Jedi, saying to Empire in November, “In The Last Jedi I became a table decoration, which I regretted, because Threepio was worth more than that.”

It seems Abrams plans to rectify how C-3PO was sidelined in his and Johnson’s films, with numerous interviews inferring that C-3PO will have an integral role in The Rise of Skywalker. In the same Empire interview, Daniels had this to say: “But he does all sorts of weird stuff in this one. It was a delight, a joy! I get to go out on a high. This is my third ending and I think I’ll be saddest about this one.”

The choice of phrase there is telling and lends support to the idea that C-3PO will sacrifice himself to save his friends and the Resistance. In no unequivocal terms, he says this is the movie he “go[es] out” on. If he’s the saddest about this one, it’s almost certainly because he knows there won’t be another. Most fan theories have revolved around the fates of Rey and Kylo Ren, but it’s clear that C-3PO’s role in Rise of Skywalker is just as worthy of the speculation it’s gotten. If Threepio goes out a hero, it would be a fitting end for the loyal and clever droid.