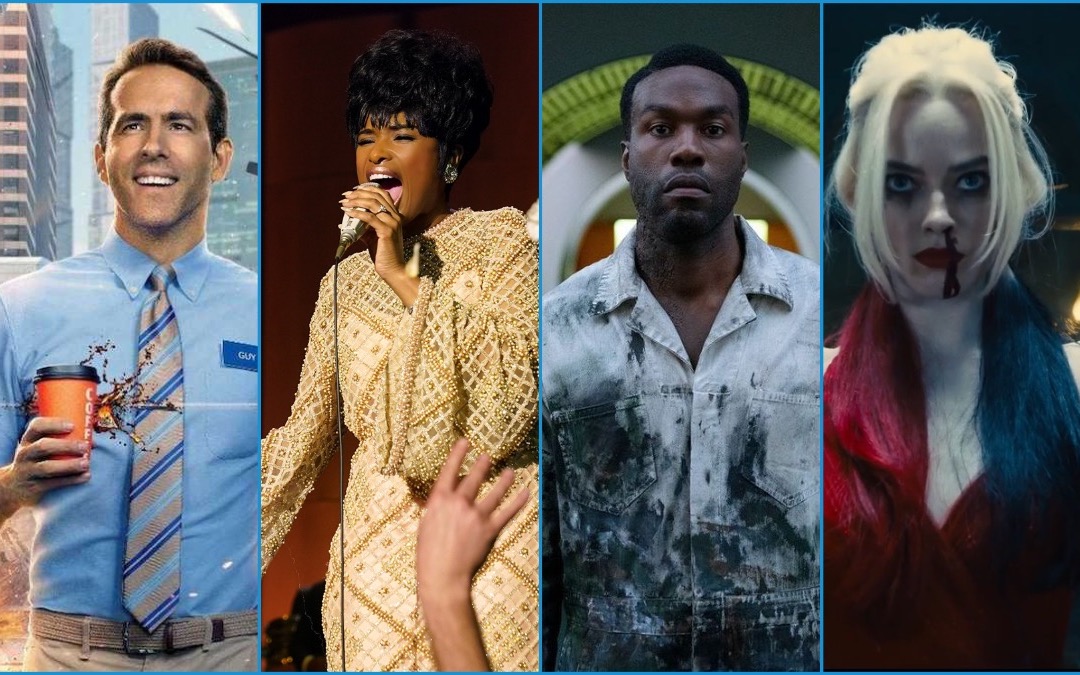 August has arrived, signaling summer winding down and a new school year coming just around the corner. That doesn’t mean there aren’t plenty of great movies to close out the summer with, though. James Gunn leads the way (and an all-star cast) with his take on the Suicide Squad. Ryan Reynolds is right behind him with an original tentpole video game action-comedy. Four different horror movies are here to deliver chills in the heat of August, along with one musical biopic, an action-packed thriller, and Hugh Jackman back at it in a sci-fi mystery. Summer’s going out with a bang.

Here are all the wide-release movies coming to theaters in August 2021.

Welcome to hell—a.k.a. Belle Reve, the prison with the highest mortality rate in the US of A. Where the worst supervillains are kept and where they will do anything to get out—even join the super-secret, super-shady Task Force X. Today’s do-or-die assignment? Assemble a collection of cons, including Bloodsport, Peacemaker, Captain Boomerang, Ratcatcher 2, Savant, King Shark, Blackguard, Javelin and everyone’s favorite psycho, Harley Quinn. Then arm them heavily and drop them (literally) on the remote, enemy-infused island of Corto Maltese. Trekking through a jungle teeming with militant adversaries and guerrilla forces at every turn, The Suicide Squad is on a search-and-destroy mission with only Colonel Rick Flag on the ground to make them behave…and Amanda Waller’s government techies in their ears, tracking their every movement. And as always, one wrong move and they’re dead (whether at the hands of their opponents, a teammate, or Waller herself). If anyone’s laying down bets, the smart money is against them—all of them.

This December, one man will save us from no new tentpole boredom. One movie will give us the romance and spectacle we’ve been missing. That man…is Ryan Reynolds. That movie…is Free Guy. Free Guy follows the life of Guy, a bank teller who lives a mundane life in an anything-but-mundane world where explosions, carjackings, murder and mayhem are the norm. As Guy goes through the monotonous motions of his days, he’s suddenly shaken out of his stupor when he passes the beautiful, strong Molotov Girlvon the street and a crush blossoms. Determined to change his life, Guy learns that he’s actually an NPC in a video game – and because of his unpredictable actions causing in-game chaos, the game developer led by the egomaniacal Antoine wants to shut it down. Can Guy go from an ordinary dude to a hero who saves the world?

Of all this summer’s horror movies, Don’t Breathe 2 is the one that may end up being the sneaky sleeper hit. Filming wrapped last year and Stephen Lang will be back as the Blind Man, the antagonist of the first film. This time he’ll be stepping into the protagonist role. He’s been hiding out for years in an isolated cabin after having taken in a young girl orphaned by a house fire. When a group of kidnappers take her, the Blind Man is forced to leave the safety of his home in order to get her back.

Musicals and musical biopics are all the rage in Hollywood right now and the Queen of Soul is the next to get the biopic treatment with a talented songstress stepping into her shoes. Following the rise of Aretha Franklin’s career from a child singing in her father’s church’s choir to her international superstardom, Respect is the remarkable true story of the music icon’s journey to find her voice.

The Night House offers a change of pace for those who are fonder of psychological thrillers than straight horror. Rebecca Hall’s Beth finds herself reeling from the unexpected death of her husband and left alone in the beautiful lakeside home they were supposed to grow old in together. As Beth tries to keep it together, she’s increasingly disturbed by visions of a specter that comes to her when she sleeps and seems to be trying to send her a message. Beth begins digging through her husband’s belongings and soon discovers he’d kept secrets from her, strange and terrible revelations that threaten to destroy her forever.

Rescued as a child by the legendary assassin Moody and trained in the family business, Anna is the world’s most skilled contract killer. But when Moody – the man who was like a father to her and taught her everything she needs to know about trust and survival – is brutally killed, Anna vows revenge. As she becomes entangled with an enigmatic killer whose attraction to her goes way beyond cat and mouse, their confrontation turns deadly and the loose ends of a life spent killing will weave themselves ever tighter in The Protégé.

Neill Blomkamp returns for the first time since 2015’s Chappie with Demonic. In Demonic, a young woman inadvertently unleashes horrifying supernatural forces in the form of demons as the uneasy and often dark relationship she shares with her mother becomes unraveled.

The PAW Patrol is on a roll!  When their biggest rival, Humdinger, becomes Mayor of nearby Adventure City and starts wreaking havoc, Ryder and everyone’s favorite heroic pups kick into high gear to face the challenge head on.  While one pup must face his past in Adventure City, the team finds help from a new ally, the savvy dachshund Liberty. Together, armed with exciting new gadgets and gear, the PAW Patrol fights to save the citizens of Adventure City in PAW Patrol: The Movie, their thrilling first big screen adventure.

In Reminiscence, Nick Bannister is a private investigator of the mind, navigating the darkly alluring world of the past by helping his clients access lost memories. Living on the fringes of the sunken Miami coast, his life is forever changed when he takes on a new client, Mae. A simple matter of lost and found becomes a dangerous obsession. As Bannister fights to find the truth about Mae’s disappearance, he uncovers a violent conspiracy, and must ultimately answer the question: how far would you go to hold on to the ones you love?

Nia DaCosta’s Candyman, a rebootquel of the 1992 original, will bring to life for a new generation the haunting story of Daniel Robitaille, a.k.a. the Candyman. The hook-handed boogeyman was the stuff of nightmares, appearing to those who took his name in vain and didn’t believe in his existence in the Cabrini Green neighborhood of Chicago. Decades later, struggling visual artist Anthony McCoy is desperate to get his career back on track. When he hears of the legend of Candyman, he starts to unravel the mystery to use in his art, accidentally unleashing the horror all over again.

Get tickets to these movies and more.