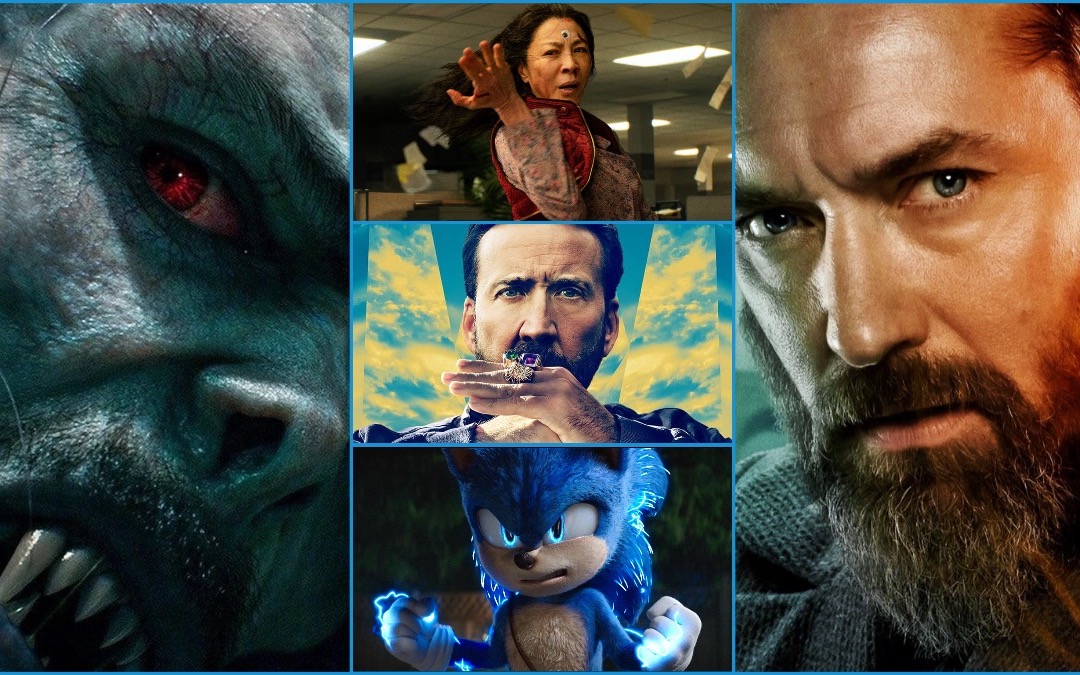 April is here and that means franchise blockbusters are starting to creep back into the movie release calendar. This month brings a new superhero origin story, the next installment in the Fantastic Beasts franchise, a historical Viking epic, a witchy folklore horror movie, a speedy blue hedgehog, multiple thrillers, an action-packed Michael Bay joint, two wildly meta movies with two veteran actors, and more. We may not be in the summer blockbuster movie season yet, but we sure are getting close.

Here are all the wide-release movies coming to theaters in April.

The next movie in the Sony Spider-Man Universe is here: Morbius. It tells the origin story of antihero Dr. Michael Morbius, a brilliant hematologist with a rare blood disorder. In his desperation to find a cure, he experiments on himself and turns himself into the “psuedo-vampire” known as Morbius: powerful, agile, superhumanly gifted–but with a ravenous craving for blood. Morbius has to decide if he’ll give into his bestial nature or rise above to help people as he once dreamed of doing.

When ex-con Marcus Cowans is released from jail, he strives to start over again with the support of his family in The Devil You Know. But when his brother is supposedly involved in a horrifying crime, Marcus finds himself torn between his loyalty to his brother and his struggle to do right. Soon, things are spiraling out of control as the chain of events threaten to pull him back into the dark and dangerous life he thought he’d left behind.

Horror movie You Won’t Be Alone is set in a small village in 19th-century Macedonia, where a young girl is kidnapped and turned into a witch by an ancient spirit. Cut off from her humanity, the young with wants to know what it’s like. When she accidentally kills a villager, the witch takes her shape and assumes her life in order to experience being human. But once she gets a taste of what it’s like to live as another, something dark within her is unleashed as she yearns for more.

In The Contractor, Special Forces Sergeant James Harper is involuntarily discharged from the U.S. Army and loses his pension as a result. Desperate to provide for his family, Harper joins a private military force, but is soon in over his head when his very first assignment goes horribly awry. On the run, Harper has to stay alive until he can unravel the mystery and figure out who betrayed him–and why.

Everyone’s favorite blue speed demon is back in Sonic the Hedgehog 2. Sonic is determined to be a hero to the people of Green Hills and he gets his chance when the evil Dr. Robotnik returns. This time, however, he’s aided by Knuckles the Echidna, as the two have teamed up to find a powerful emerald that can destroy entire cities. But Sonic isn’t alone, either–aided by his friend, Tails, the two race around the world to find the emerald before their adversaries do. Will they stop Dr. Robotnik from getting his hands on it and save the world?

When his wife is badly in need of a medical procedure they can’t afford, a decorated veteran teams up with his adoptive brother to rob a bank in Ambulance. But when the heist goes terribly awry, the two must flee from the crime. The pair steals an ambulance in order to get away, with a badly injured cop and an EMT in tow. Running from the law, the two begin a high-speed chase through Los Angeles while trying to shake their pursuers and keeping their hostages alive.

Everything Everywhere All At Once – Release Date: Friday, April 8

The multiverse concept is in right now and Everything Everywhere All At Once takes perhaps the wildest swing with it. Evelyn is an aging Chinese immigrant who just wants to help her family survive. Instead, she finds herself caught up in a universe-hopping, whirlwind adventure when she learns she’s the only person in the multiverse who can save it. Soon, she’s exploring other universes and stepping into the lives she might have led in another world.

Based on a true story, Father Stu tells the story of a boxer who must find his purpose in life when he’s forced to retire after an injury. He soon moves to L.A. to pursue his dreams, but finds himself stuck working as a supermarket clerk, instead. When he meets a woman who has no interest in him, he starts attending her church in order to impress her. But his indifference toward faith changes when he survives a motorcycle accident that should have killed him and he realizes that his true calling in life is to be a Catholic priest.

The third movie in the Harry Potter spinoff arrives when Fantastic Beasts: The Secrets of Dumbledore hits theaters. Professor Albus Dumbledore knows the dangerous dark wizard Gellert Grindelwald is moving to build an army and seize control of the wizarding world. Running out of time, he tasks Newt Scamander with enlisting a covert group of wizards, witches, and Muggles for a dangerous mission that will turn the tide.

In a family-friendly twist on Reservoir Dogs, The Bad Guys follows the criminal animals and master thieves Mr. Wolf, Mr. Snake, Mr. Piranha, Mr. Shark and Ms. Tarantula. When they’re finally caught in a heist, they agree to pull off their biggest con yet in order to avoid going to prison – fooling the world that they’re reformed. With the help of Professor Marmalade, they set out to convince everyone they’re now model citizens, but stumble into some surprises along the way.

Nic Cage is known for wacky movies, but The Unbearable Weight of Massive Talent might be his wildest, weirdest one yet as the passion project that’s been close to his heart for years. The semi-biographical movie goes full meta as Cage stars as himself. A broke Nicolas Cage agrees to make an appearance at a billionaire’s birthday party for money. But the simple meet-and-greet turns into something else entirely when the CIA recruits Cage to be an informant. His mission is to channel his greatest characters in order to get dirt on the billionaire, who is actually a drug kingpin. Things…do not go according to plan.

The Lighthouse director Robert Eggers is back, this time with an epic early medieval saga, The Northman. When his father is murdered by his uncle, a young Viking prince goes on a grueling quest to avenge his death. If you’re thinking that sounds familiar, you’re right–The Northman is loosely based on Hamlet, which itself is based on an ancient Scandinavian legend about a Danish prince named Amleth, from which Shakespeare may have taken inspiration. Either way, there’s a lot of blood, a lot of murder, and a lot of beautiful cinematography.

Liam Neeson returns to the big screen in the–you guessed it–action thriller Memory. This time, it’s a remake of the 2003 Belgian thriller The Memory of a Killer. When he refuses to do a job for a dangerous criminal organization, a hired assassin learns he’s the target of a hit. With the crime syndicate, the FBI, and Mexican intelligence on his trail as the bodies pile up, he has to stay one step ahead. There’s just one problem–he’s starting to struggle with the effects of memory loss, and it turns his ordeal into a nightmare of faulty memories and knowing who to trust.